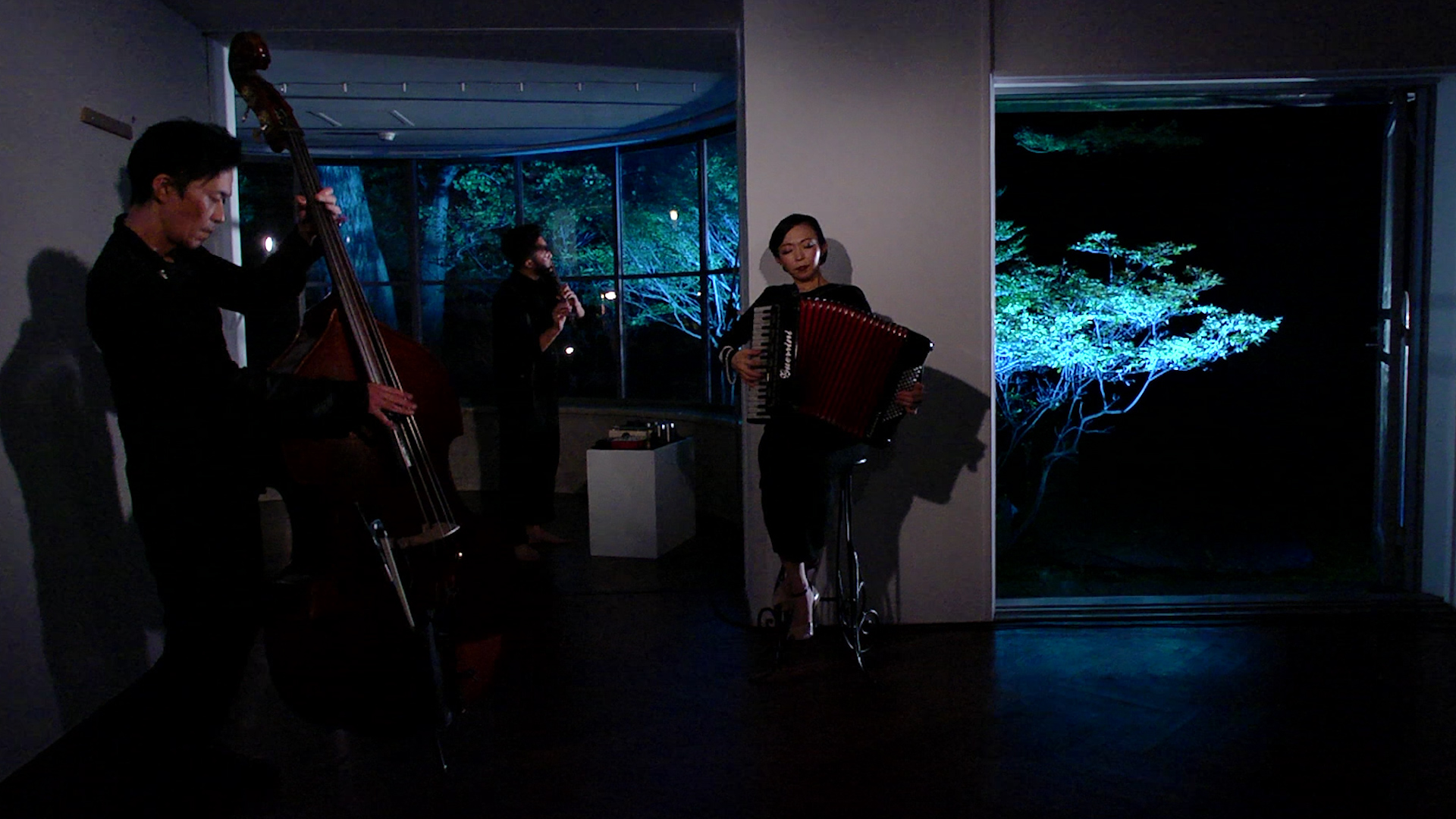 An apparatus for a journey through space-time: “Three Concerts by Hara X mama!milk”

A man and a woman – one holding an accordion, the other a contrabass – appear against the in light in a white corridor. Sound is released quietly into the space, like the result of breathing. The contours of silhouettes gradually come into view, as if I were watching a photograph emerge from a developing bath onto monochrome photo paper.

This video piece, titled “Three Concerts by Hara X mama!milk,” is a concert film focused on the passage of time and recorded in the Hara Museum of Contemporary Art, where the instrumental unit mama!milk played “concerts in the morning, through twilight, and at night.” The unit fuses diverse “musical atoms” from classical, Latin, jazz, modern, and contemporary music into a unique mixture, played in a way that appears to awaken the memories of the space. 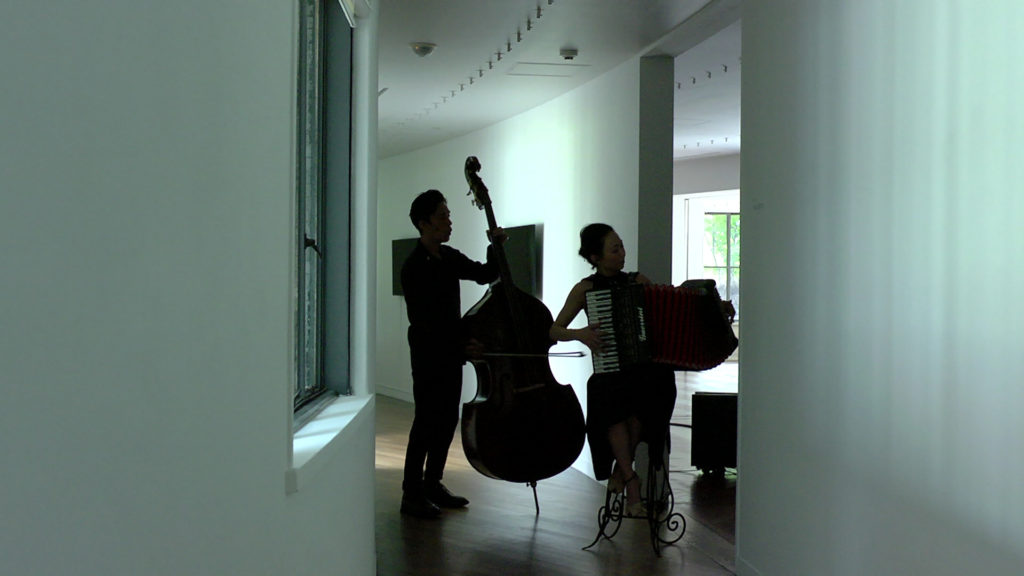 “Parade,” the first track of “I. Morning Concert,” recreates with sound the relaxed tempo of waking up on a weekend morning. As the four-beat rhythm gradually speeds up, repeated riffs increase the number of rotations, and the day begins like a train slowly departing a platform.

This is followed by “Untitled Pizzicato in Em,” in which “the moon” gets accompanied by a flute, and the mellow pizzicato of a contrabass invites me to fantasize about a summer spent in Europe: a drowsiness brought on by white wine during a quiet siesta on Gran Canaria, or a Finnish holiday spent simply lying around in the midst of nature, doing nothing.

The morning concert ends with “Parade, Waltz,” which feels like finally waking up at a leisurely pace and heading out for a walk in the park while whistling to oneself. 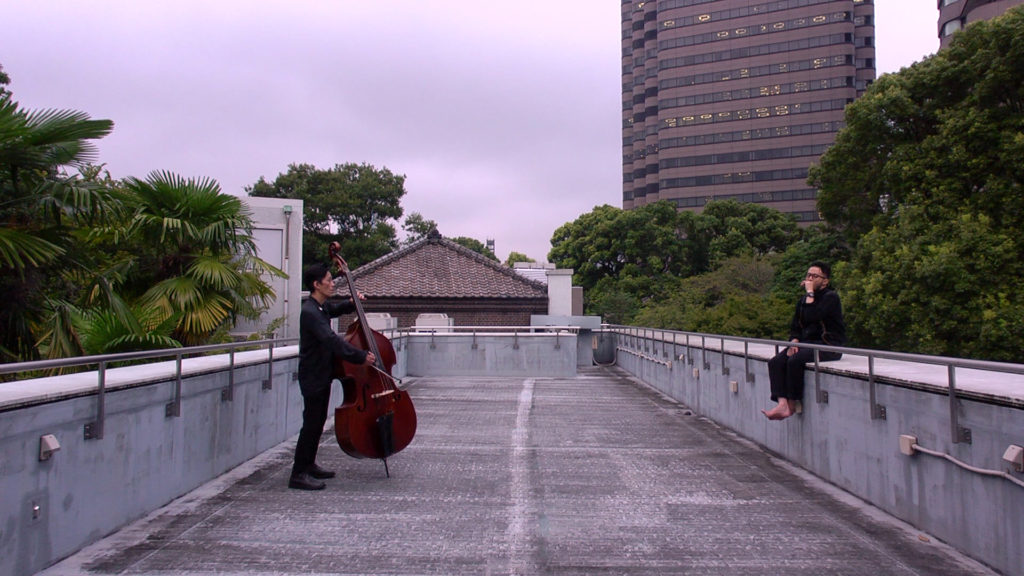 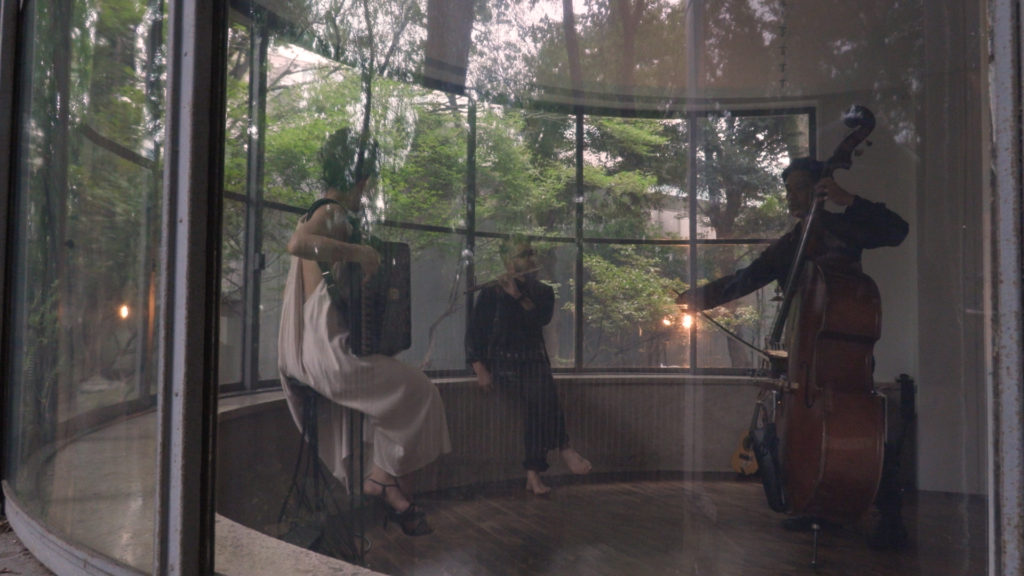 In “II. Concert Through Twilight,” viewers look up at the trees watching over the museum and the slivers of light that make their way through the foliage into the garden, and view “waltz for Hapone” by a beautiful round window. Its transition-rich melody is full of ups and downs, making for a rich expression of the variety of mental states and feelings that grip us in everyday life.

Next, we find ourselves on the roof, and “an Ode” – a special piece of music for me – begins. When I first heard this track at a mama!milk concert, for no distinguishable reason, I pictured it playing at the very end of my life.

But here, “an Ode” sounds different. Played against a gritty background of skyscrapers, it begins with the low growl of a contrabass, joined by the somehow vacantly resonating tunes of a harmonica. It’s as if looking at a surrealist painting depicting a dry daydream. The harmonica is joined by an accordion in the building somewhat further away in the back, appearing like the towering statue of a goddess. A sense of disquiet ensues, and soon an artificial noise, like that of a speeding train, overwhelms the diligently played instruments.

Back inside the museum, faint rays from a window in the ceiling paints a spiral staircase in the colors of twilight, and only the movement of instruments, single-mindedly emitting sound, come into view. “Charade,” in a melancholy expression of the cruelty of reality, wraps fleeting pain and helplessness in its loving embrace. 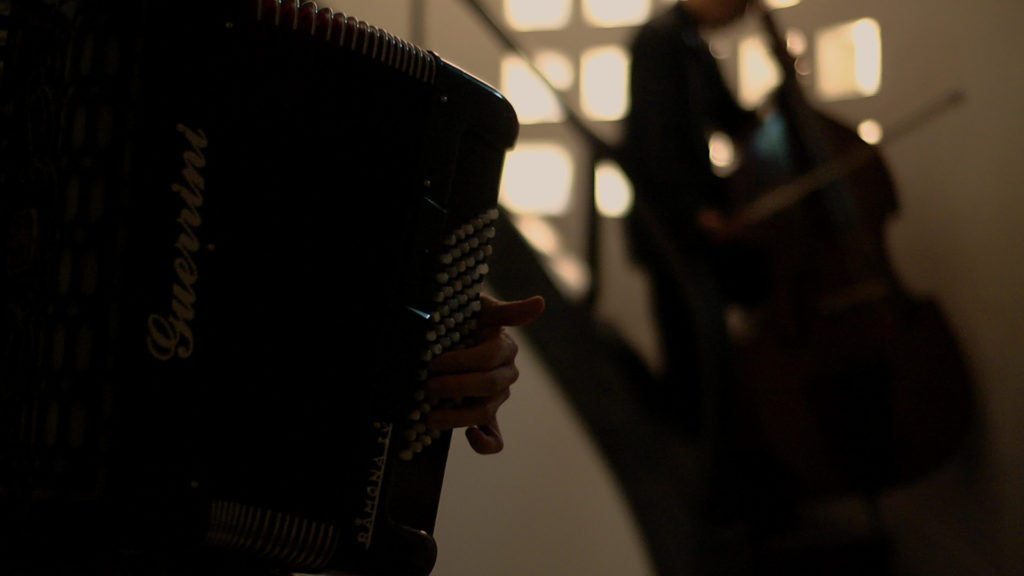 The gloomy top of the spiral staircase from “Twilight” is where “III. Concert at Night” begins. A thin human form holding an accordion descends the stairs, and the bellows spit out one syllable after the other at every step. The melody of “an ode,” suffocated by noise only moments ago, slowly comes together, gasping for air again. My emotions tremble as if on my deathbed, looking back at memories lived one after the other, and tears begin to flow naturally.

But of course, the night has only started, and will not leave me to wallow in my sentimental demise. The next piece, “Veludo,” is of a completely different breed: as if carving out the subtleties of a life not without its twists and turns, it makes use of the rhythms of Bolero and a powerful crescendo toward the end, exhorting me to keep walking by pulling my arm and dragging me back into the flow of people. 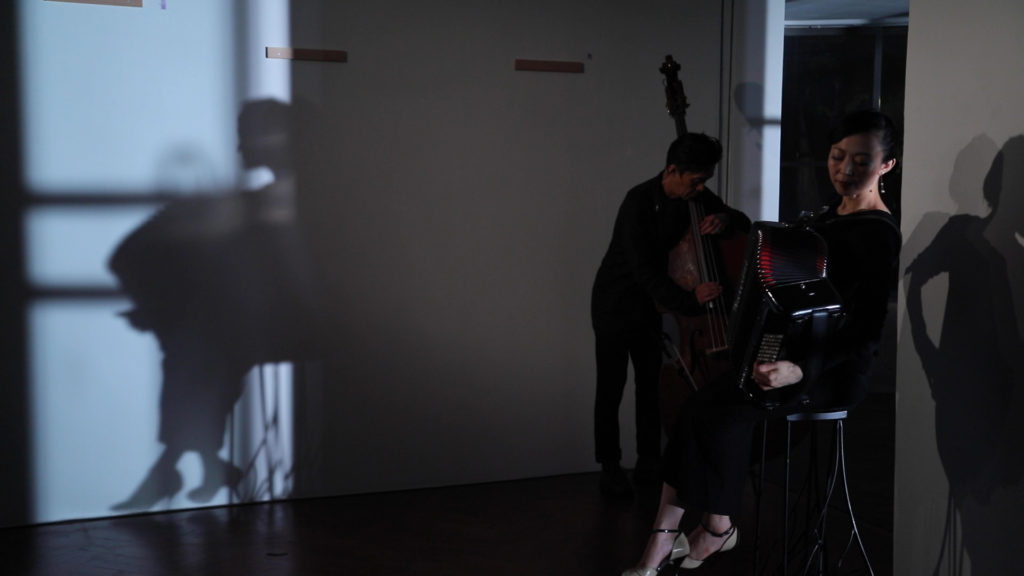 As the shroud of darkness grows thicker, we finally get the kind of alluring nocturnal tones that mama!milk are noted for. In “Eien no waltz” and “Tango al fine,” skillful changes in tempo and strength are used to trace inescapable fates and a foolish and comical past left to drunken follies, and before one knows it, the scene outside the windows is one of bewitching brilliance.

After calm has been restored and an emergence from the memories of bad experiences with booze has been accomplished with the help of Bach’s “6. Klein Präluden No.2,” a large contrabass and a small cavaquinho begin a slightly distorted strumming of “Um Manhã Pescador,” expressing the steady breathing of a sleeper. Then the emotion-filled tunes of the accordion in “ao” signal dawn and arousal, while “Kujaku” awakens at the bottom of the ever-deepening night. Perhaps it’s the sharp sounds of the metallophone, but the calm and collected shadows manipulating the instruments come to resemble the movements of a music-manufacturing machine, as if in some strange movie projected by a magic lantern. 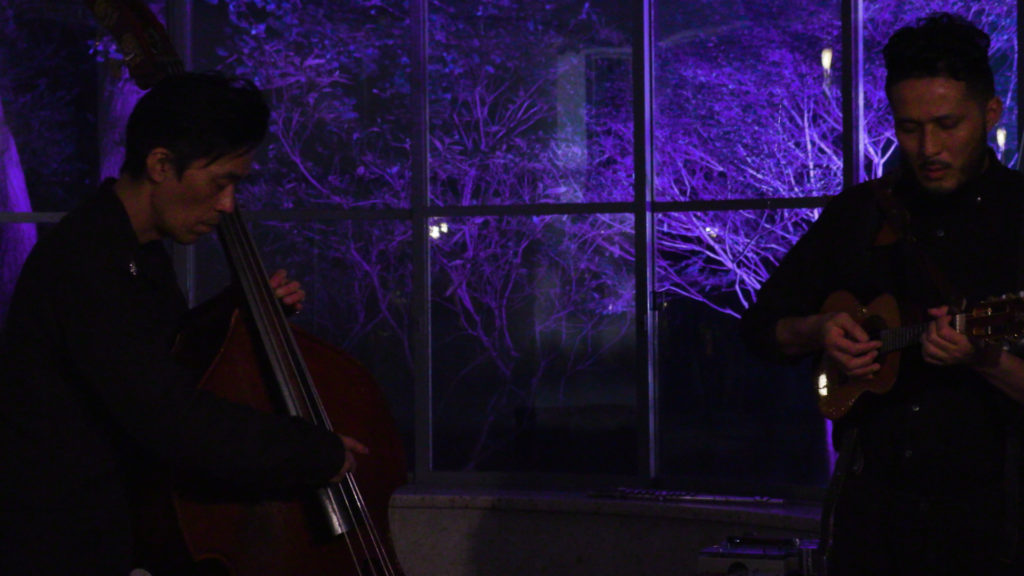 Upon arrival at the next part, “Sanctuary,” both rhythm and melody have been pared away, and the liberated sounds interact as if in prayer. The sound of a bell flickers like the flame of a candle, signaling the end of it all, that it will soon be time to return to one’s place of origin.

And then, the last waltz: “your voice.” The apparatus called “Hara X mama!milk,” loaded with a contrabass and two accordions and built to let us viewers travel through space and time, breaks off from a giant spaceship in a zero-gravity space, grows gradually smaller, and disappears far into some unknown dimension. 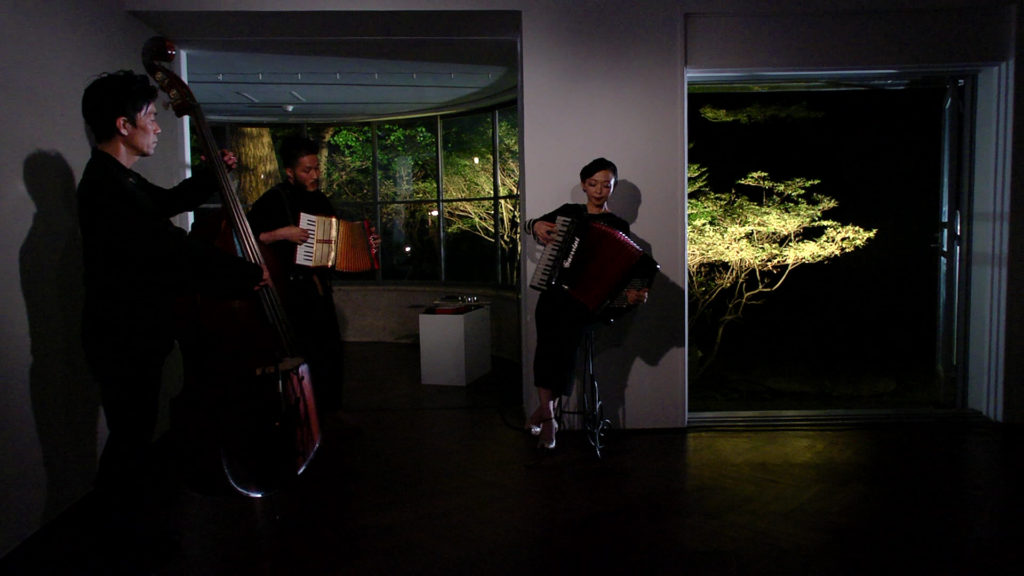 So ended the series of three concerts: “Morning, Twilight, and Night.” It felt like one long day, or like a short lifetime.

This year has bombarded us with one unexpected event after the other, but is already moving into its final stretch. Let us love and appreciate time. All years, no matter how eventful, pass by in the blink of an eye, but a single day spent with purpose can stay with us longer than we’d know.

Hara X mama!milk, Concerts in the morning, through twilight, and at night