Once Upon a Time in America
Directed by Sergio Leone 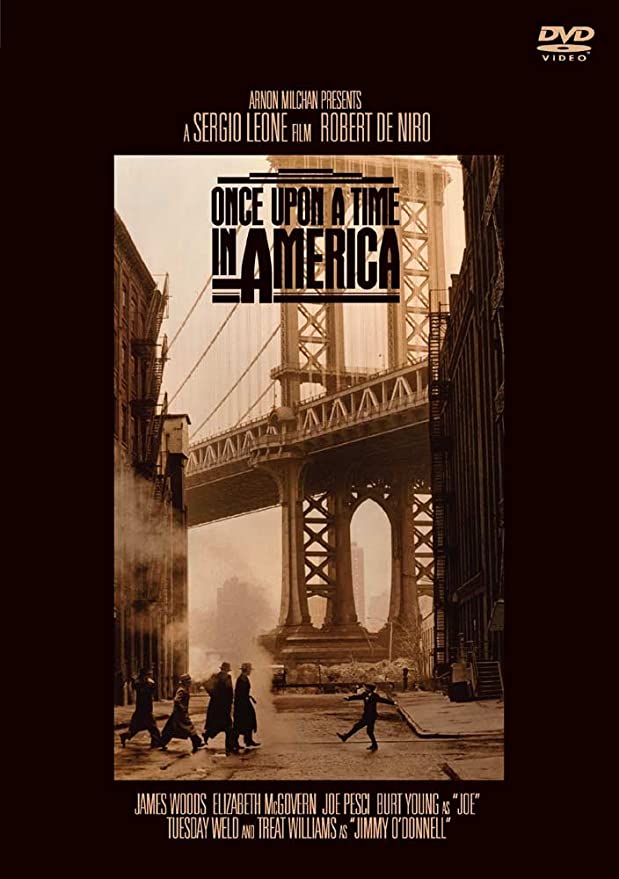 Italian director Sergio Leone, known as the master of the “spaghetti Western,” spent 16 years developing his only contemporary drama, which also came to be the auteur’s final film. Once Upon a Time in America (1984), set to the melancholy pan-flute tunes of Ennio Morricone, is an epic achievement with a runtime of 3 hours, 49 minutes. Praised at the Cannes Film Festival, however the movie was infamously reedited by its producers for the American market. The resulting shortened cut was a critical flop, but the eventual wide release of the original brought about a reevaluation of the film’s many merits.

Once Upon a Time is set in the Prohibition-era 1920s. Seeking a way out of the poverty and squalor of New York’s Yiddish-speaking neighborhoods, five delinquents begin a life of crime. Max (James Woods), their leader, and Noodles (Robert De Niro) form a bond of absolute trust, but Noodles is less interested in success than he is in Deborah, another friend’s little sister, who dreams of becoming an actress. But for the ever ambitious Max, whose sights are set on ruling the town, women are nothing but objects of base desires. The two friends’ differences eventually tear their relationship apart. The film begins with Noodles fleeing his pursuers and leaving New York – a city he won’t set eyes on again for 35 years.

While Once Upon a Time is Leone’s tribute to gangster movies and his first film to take place in America, it also has a lot in common with the director’s other works, including themes such as a world in which men compete for power, friendship and jealousy, and betrayal. Also familiar are how the actors’ expressions speak louder than their words, the use of close-ups, and the violence. These essential Leone elements are backed up by a memorable cast: De Niro, Woods, Joe Pesci, Burt Young and so on.

Equal excellence can be found in the bold and vivid editing, which moves with ease between differing eras of New York history, from the drab, grimy 1920s to the ’60s, and in the attention to detail, through which the personalities and social circumstances of the characters are implicitly revealed. In an exemplary scene, one of the young delinquents, bearing a wrapped cake intended for a girl, is made to wait outside a door. Unable to suppress his hunger, he sticks a finger into the cake for a quick taste, then moves on to the toppings before eventually eating the entire thing. It’s a scene that puts a smile on your face, but also one that depicts the poverty faced by immigrants at the time.

Certain themes in Once Upon a Time, however, differ critically from those of Leone’s previous films. These ideas include remorse and nostalgia, and that the story has neither heroes nor villains. In pursuit of their dreams, men with blood on their hands face defeat and retreat into their memories. In a way, the story is Leone’s “In Search of Lost Time”; Noodles, even after 35 years of hiding, remains unable to let go of the past and move forward. His entire opium-fueled existence revolves around thoughts of Deborah, who left him and set out for Hollywood, and the innocent, heartfelt times once spent with good friends.

Particularly memorable and romantic are the interactions between Noodles and Deborah as children. There is such sweetness in the scene where Deborah (impressively played by a 14-year-old Jennifer Connelly, who emits a dignified glow) dances alone to the reassuring melody of “Amapola” while Noodles peeks at her through a hole in the wall.

But Noodles is unable to let go of his friendship with Max, and Deborah feels nothing but contempt for the world these two inhabit. When she and Noodles separate under miserable circumstances, they are both left with a stain that just won’t come off.

Morricone’s music is of course superb, but the use of the Beatles song “Yesterday” is also worth noting. The combination of Morricone and the Beatles may appear curious, but “Yesterday” – released in 1965 – may well have echoed through the streets of New York in the late 1960’s, when Noodles returns to the city. Still, Leone chose this song for its lyrics as much as for its sorrowful melody.This ballad about losing the one you love, which perfectly captures Noodles’s penchant for clinging to the past, might as well have been written for Once Upon a Time.

The film ends with a shot of De Niro’s mysterious smile. Perhaps this is Noodles wallowing in his memories of sweet bygones, enjoying a fleeting moment of happiness. It’s as if we’re told that the past is what’s truly worth living for.

It is said that Leone, who had never worked with De Niro before Once Upon a Time, became enchanted with the actor and planned to cast him as the lead in an upcoming epic set in Leningrad under Nazi rule. The director did not live to see his plans realized: Leone passed away in 1989, at the age of 60. His legacy, however, lives on in the work of directors such as Martin Scorsese, Clint Eastwood, and Quentin Tarantino, exerting a continuing influence on the history of cinema.

Once Upon a Time in America