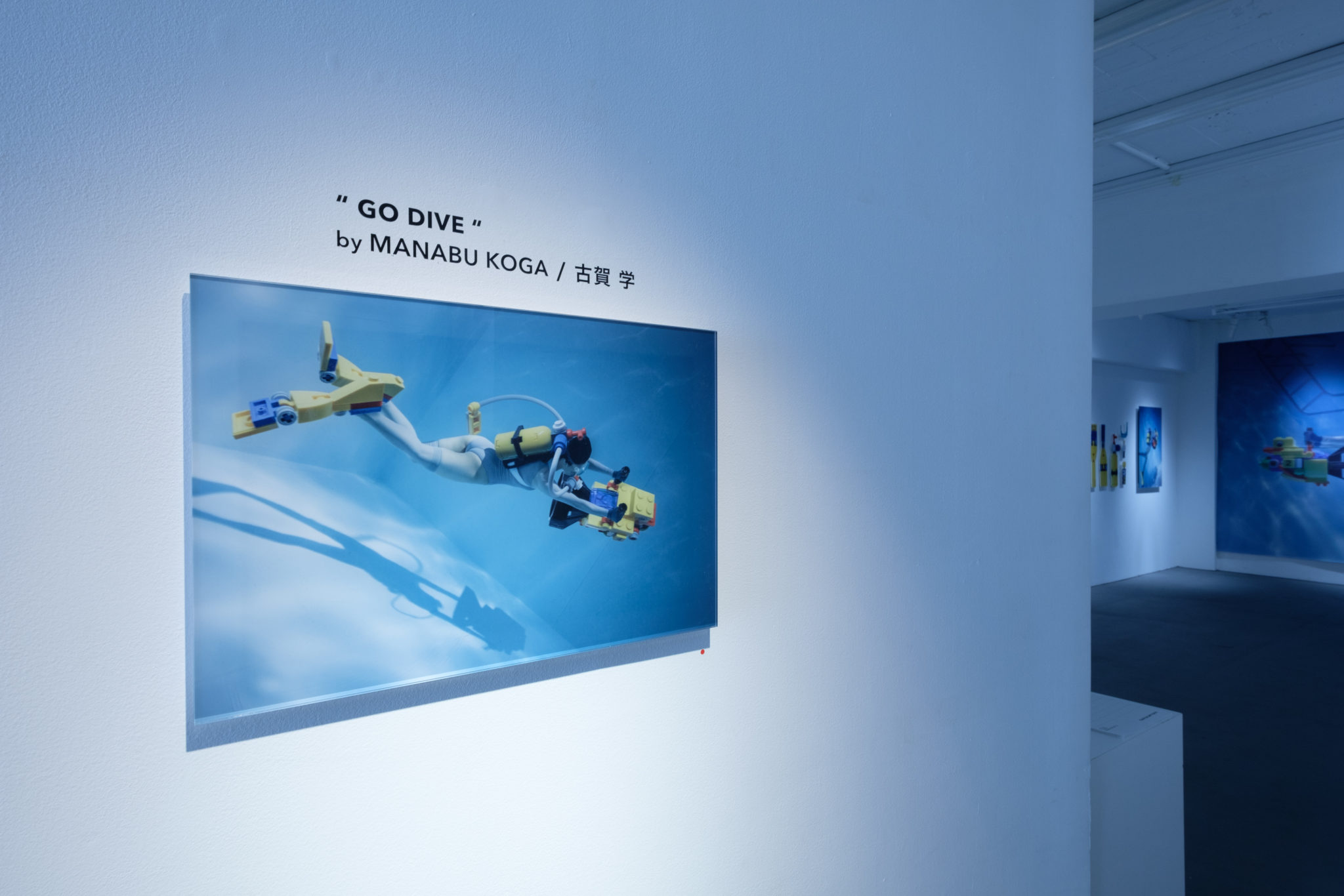 Since reaching a peak around 1996-97, the number of books, monthly and weekly magazinespublished in Japan has been steadily decreasing (link 1). They were replaced by online media that came to the fore. Next to his endeavors as an artist, Manabu Koga continuously engages in genre-crossing activities that include also work as a designer. He started during the heyday of magazine culture, at the dawn of DTP, right before the advent of the Internet. In 1993, he privately launched Pepper Shop, a free magazine featuring articles in the form of interviews with artists and designers, and for those today who don’t find much when googling the scene of the 1990s, these interviews are invaluable documents. 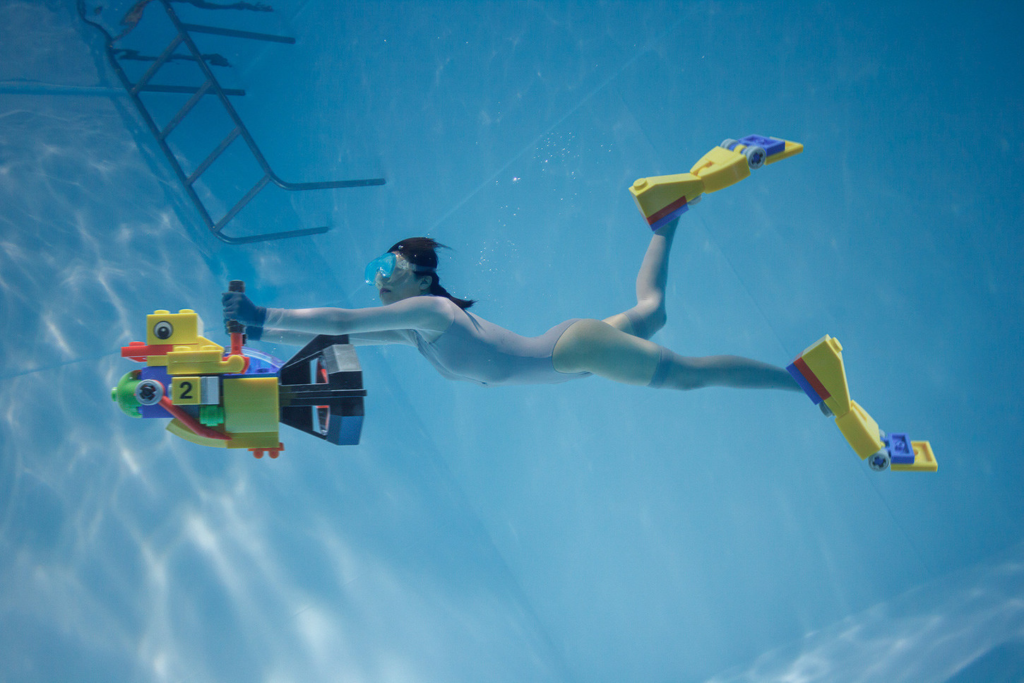 As part of Koga’s ”girls in the water” themed video works that has been going on since 2002, the ”Underwater Knee-High Girls” series (link 2), illustrating chance encounters between racing swimsuits and knee-high socks under water, started in 2012, and was first unveiled in an art exhibition in 2017 (link 3). One of the many variants is a “co-performance” with LEGO that is showcased in this one-man exhibition. A little over twenty years after Pepper Shop, Koga claims that the ”Underwater Knee-High Girls” represent an artistic style that was strongly committed to the age of social media. That’s because they are not just cute and catchy looking visuals, but the visual environments that we live in have already been combined in a layered fashion, heaped up and built. This “contemporary” kind of style Koga refers to as “pixelrealism.” It’s about the reality of the generation that keeps uploading and playing around with selfies on social media day in day out, based on the movement that has been pushing photography to the realm of painting in the name of “pictorialism,” and the movement pursuing original photographic methods as straight photography; and about the reality of a world in which postproduction is a premise. With this in mind, the Japanese translation of “photography” is a troublesome affair, as the word shashin(literally “copy of the truth”) lacks the lightness of the Latin or Chinese terms for example, which simply refer to “depictions of (pieces of) light.” 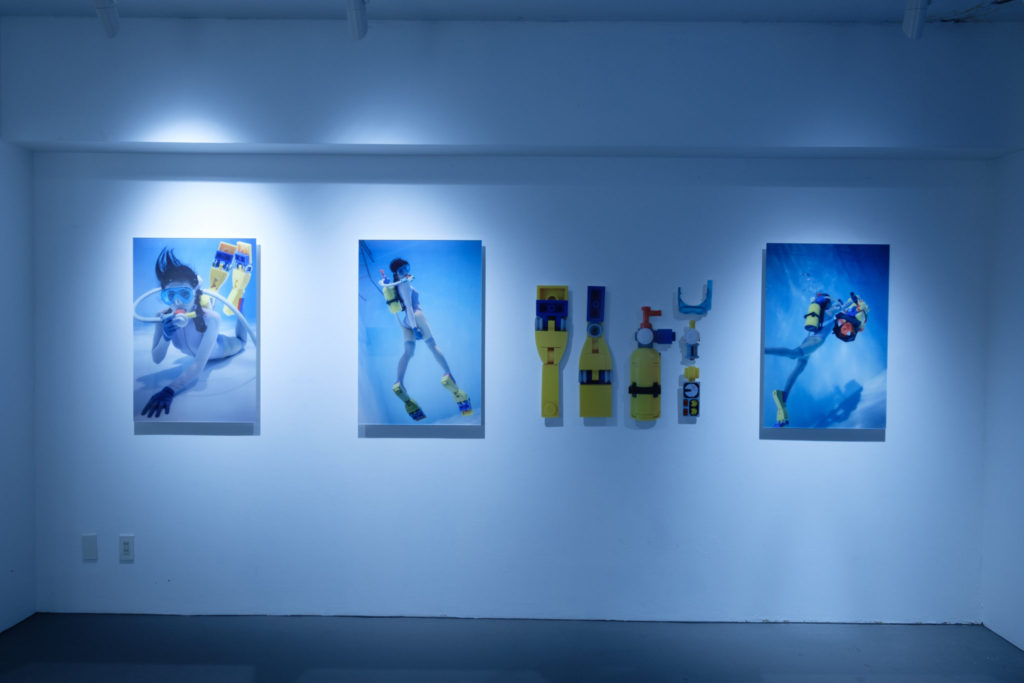 The models in the photographs are equipped with objects made from LEGO. They do look cute. But there seems to be something wrong. When looking carefully, one can see that the LEGO equipment was created by enlarging photographs of objects made from LEGO to fit the sizes of the models, and then synthesizing the respective photographs. So neither are the models actually dressed/armed with full-sized objects with that typical LEGO look, nor were large amounts of real-size LEGO blocks used to make something as close to the real thing as possible (link 4). Instead, shapes that “look like it” are determined using minimum numbers of pieces. Each photograph is a microcosm in which different sizes, different materials, different resolutions, different cultures, and different “builders” coexist. Together they have built their very own reality that appeared as a passionate yet cool creative shower in the severe Tokyo heat.