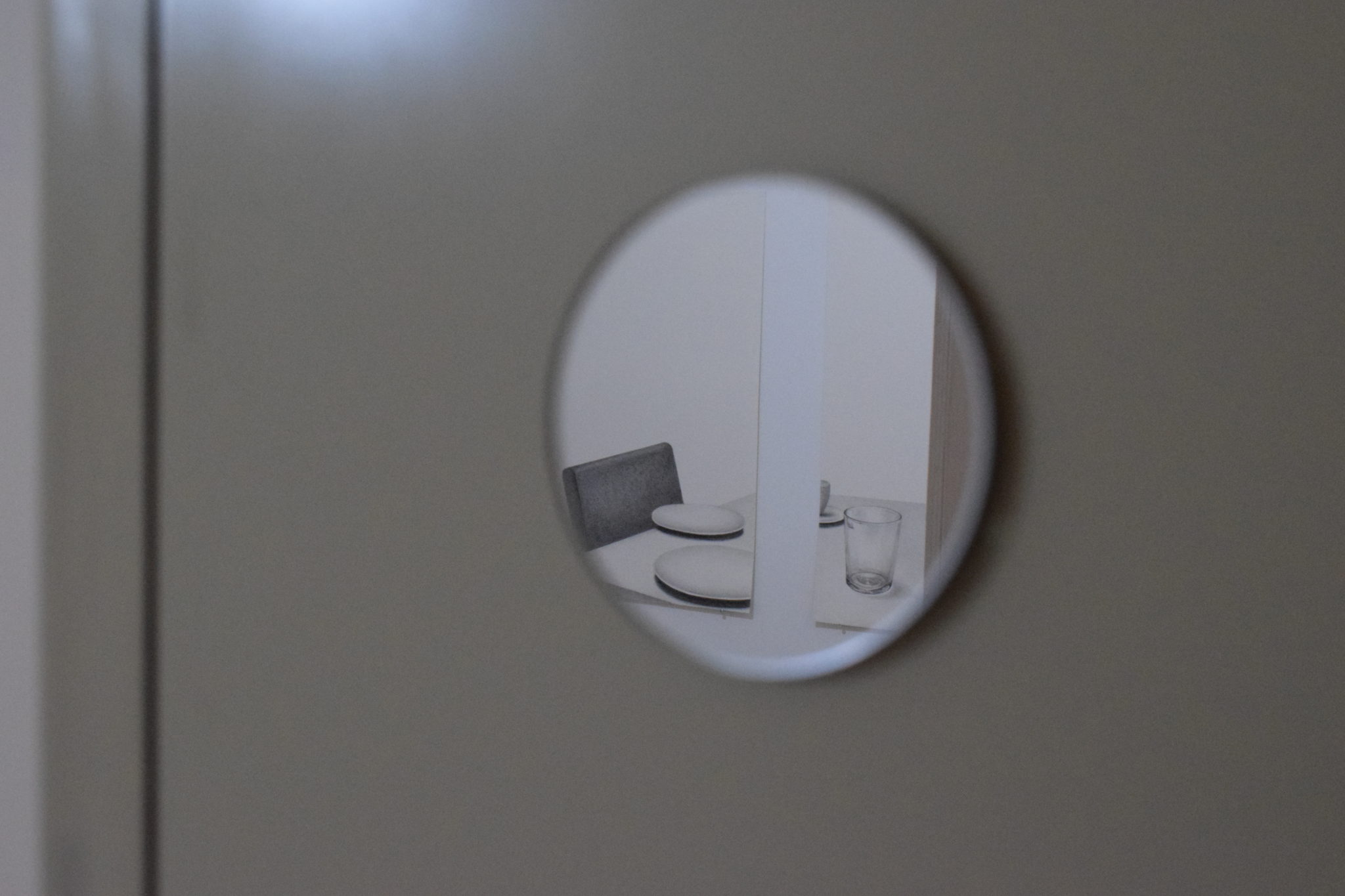 Following the somewhat enigmatic invitation to “gather up in the story,” I arrive at the old apartment building located a few minutes’ walk from the north exit of Omori station. My destination is room no. 1018 on the tenth floor. Inside I find a separate space, square and quite small, and illuminated by the bluish light of an LED bulb that is suspended from the ceiling. There is an opening in the back, but no door, only a patterned lace curtain through which I can see the faint yellow light of a wall lamp behind it. I turn around and notice a small round-shaped mirror rather high on the wall, arranged so that it reflects part of the room when viewed from a certain angle. Displayed on each of the four walls are several monochromatic pencil drawings.

In one of them, the upper part is mostly left blank, while at the bottom one can see two differently colored dishes, stacked and placed so close to the edge of a table that they might be just balancing on the edge, or fall down any second. The image is cut off by the margin on the left. Sitting on two nails, the drawing is propped up against the wall, whereas the shadow of the slightly warped paper on the wall looks like an extension of the shadow of the dishes in the drawing. This is how the space inside the picture melts with the space around it. 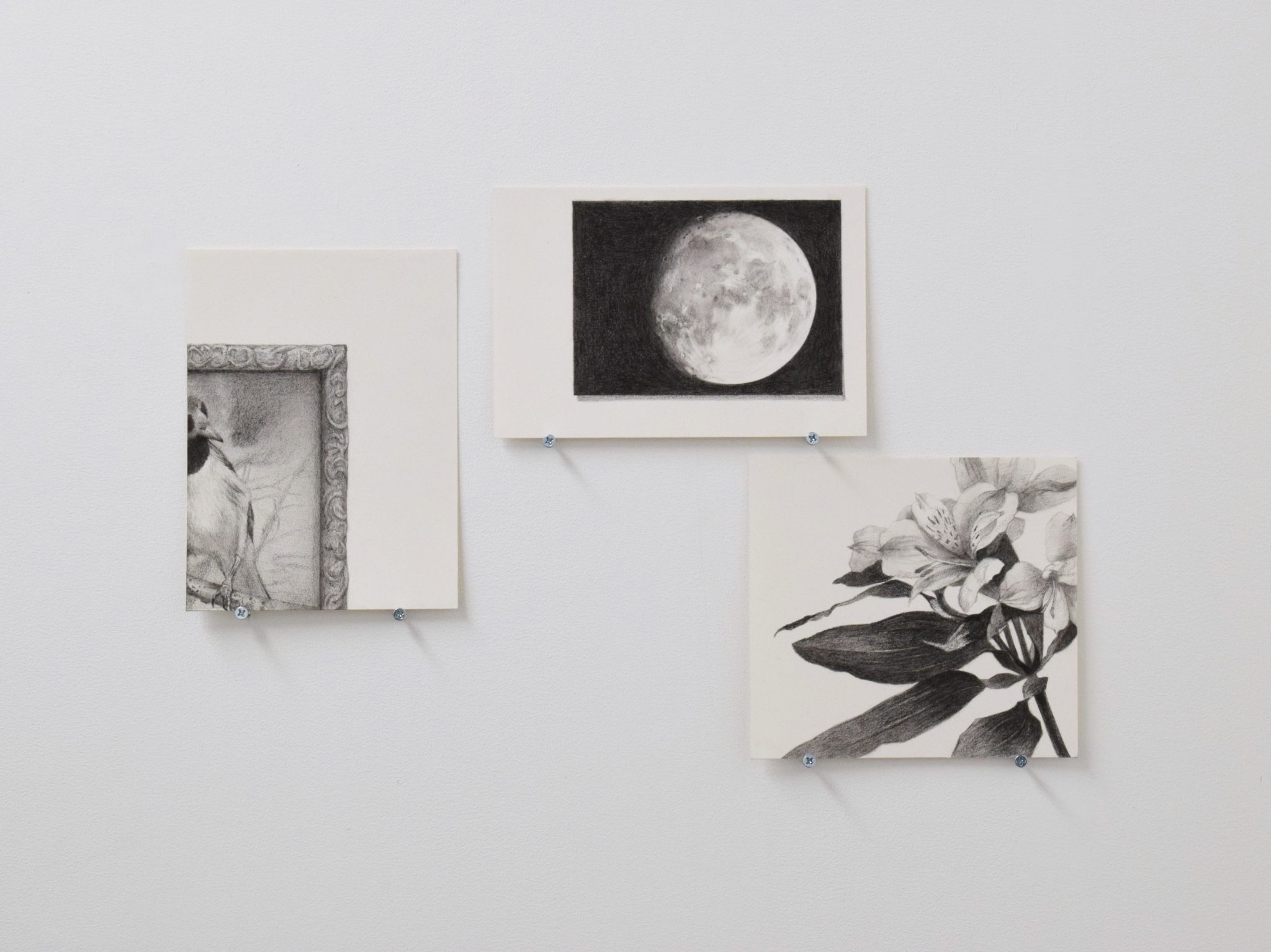 On the other wall is a small triptych of drawings. One shows a part of a framed drawing of a bird, another one a partial drawing of a lily. In the third picture, showing a drawing of the moon against a pitch-dark background, one can recognize a shadow at the lower edge of the square image within the picture, which suggests that this is actually a drawing of a drawing on a wall. While each of the three drawings seems to depict one concrete motif, when looking at them for a while, one begins to see the spaces and walls around the pictures.

Humans use their imagination to fill out missing parts. Akiko Hashimoto’s drawings always include such parts where something is missing, as a result of which the viewer ends up focusing on the blank spaces more than on what is drawn. The way the artist carefully chooses motifs, sizes, manners of placement and trimming, in order to synchronize her drawings with the environments they are exhibited in, reminds the viewer of the various components that define the situation, including lights, signs, reflections, sounds, the viewer’s perception and psychology. As a result, the mystery that lies hidden in ordinary spaces surfaces along with the foreboding images.

I take another look around the room, with the same gaze that I employed when looking at the drawings, and finally recognize the nested structure of the entire space. The walls disappear behind the pictures, and suddenly the volume of the one-room apartment seems limitless. The artist explains that she wants visitors to ”takes sceneries home,” which, considering that drawings and walls merge into one, probably means that viewers are supposed to take entire walls home with them…

This is the third installment in a series of exhibitions that independent curator Sayako Mizuta is putting together on the title Gather up in the story. A variety of narratives unfold in a tiny space of not even 3×3 meters inside a one-room apartment in an apartment building. The Tokyo art scene is getting increasingly fragmented, and here small things are not presented in a big style. But it’s not an act of escape and withdrawal either. It’s the light practice of city dwellers pursuing a freedom in which small things can expand endlessly while remaining the small things they are.

From the window of the apartment on the tenth floor one can see the multiple railway tracks of the JR lines below. The next artist to exhibit his works here will be Daisaku Oosu, who continues to capture sceneries through train windows. I’m already looking forward to the next fantasy story set in this small apartment room.