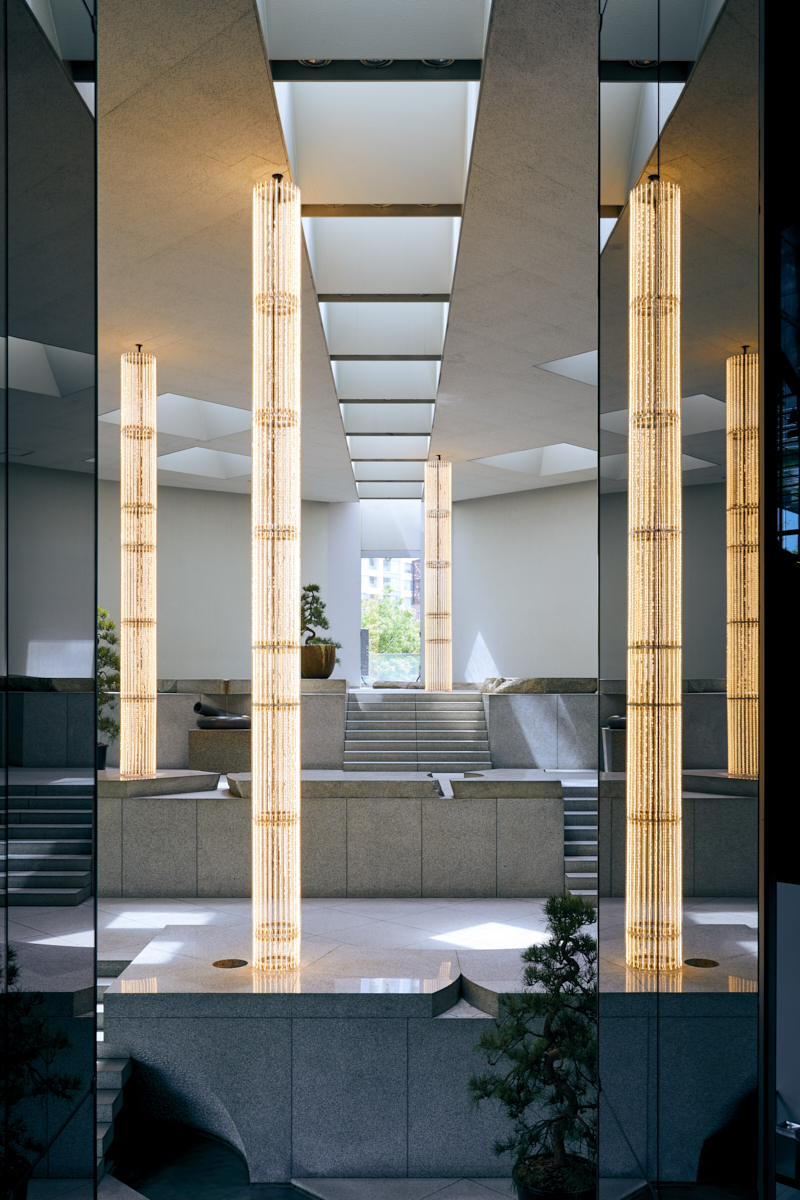 The sculptural installation by Cerith Wyn Evans at Sogetsu Plaza—a two-level structure containing a stone garden built on the first floor of the Sogetsu Kaikan, headquarters of the Sogetsu Ikebana School—transformed an entrance space people usually pass right through into a place of exhilarating sensual pleasure and spiritual meditation by making simple additions to the existing architectural structures.
All Wyn Evans did was to place within the stone garden designed by Isamu Noguchi, located in the building designed by the architect Kenzo Tange, three columns of light covered with filament bulbs, and two potted pine trees. Yet the columns of light, while projecting a palace-like splendor, also suggested a ritual space evocative of ancient shrines, as well as of theatrical stage of Noh, a form of musical drama itself developed from religious rituals. On the opening night of the exhibition, in fact, a Noh actor danced the climactic scene of the Noh play Izutsu, in which the wife of Ariwara Narihira, ancient poet and nobleman, dances clad in male attire in longing for her late husband. The ritual of identification with the person one adores, played out by a woman through male impersonation, embodied Noh’s symbolic effect of uniting opposites such as man and woman, this and other worlds, allowing spectators to grasp the basic analogy between Noh’s symbolic effects, and the columns’ function of connecting heaven and earth. 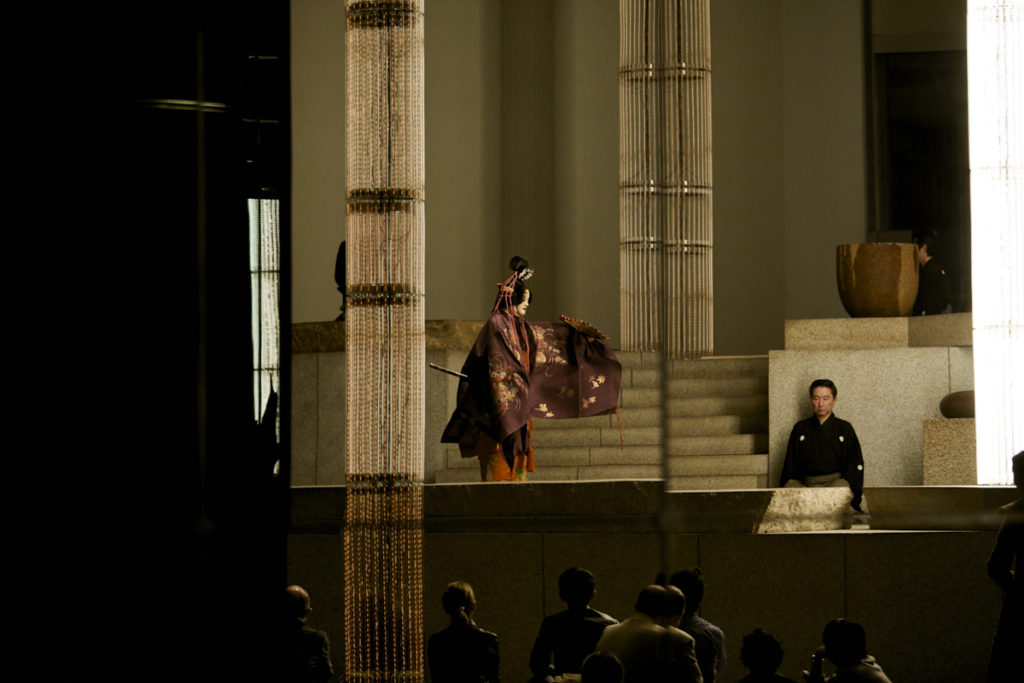 Visited during the daytime on days without special events, Wyn Evans’s installation, through its physical structure and sensorial impact, made spectators aware—in addition to the fluidity of the “open” architectural space—of the affinity between itself and the basic structure of traditional Japanese architecture whose essential elements are columns and floor. Standing on the higher levels of the stone garden, for example, one saw the columns of light create numerous reflections on the building’s transparent glass walls, the shiny surface of metal pillars, the water in the hand-washing basin. Thanks to the flexible way in which the columns were hung from the ceiling, making them subtly sway, and the digital control of the column lighting, making them dim and brighten, the reflections of the light columns appeared and disappeared in unexpected places. On fine days, the reflections were superimposed on the bodies of cars passing along the road outside, and foliage across the road, drawing the external landscape into the indoor space. On rainy days, or in the twilight, on the other hand, golden columns were conjured up, like so many will-o-the-wisps, on such places as the somber canopy of trees in the dusk, or glowing restaurant windows, luring spectators like lanterns guiding them to the entrance of a spiritual realm. Confronted by such apparitions, spectators feel the powerful presence of phenomena that exist as sensory reality; standing in the expanding field of associations evoked by such phenomena, they truly feel they are connected with the world beyond while still dwelling in the present time and place. The interplay between the illusory reflections and actual figures of the light columns, created by the transparent glass medium, erases the glass wall at the level of the spectator’s perception, giving a sense of the installation space expanding infinitely beyond the actual boundaries of the building. Such an impression of fluid space is supported by, together with the reflections, the sense of a specific “space” (site) created around the columns by their physical structure.

This structure of fluid space created by Wyn Evans is reminiscent of the fundamental spiritual function of columns, pointed out by Kiyonori Kikutake, a key figure in the Metabolism avant-garde architecture movement, in his 1968 book The Theory of Metabolic Architecture (Taisha kenchiku ron). Kikutake sought the model for his ideal “metabolic” architecture in the basic structure of traditional Japanese architecture, whose fundamental principles are floor and columns, as epitomized by ancient Shinto shrines. Columns, especially, according to Kikutake, embody a tension comparable to a tree trunk connecting cosmic foliage and underground roots, creating around it a specific “space.” This tension makes people clearly aware of the specific nature of the site that emerges in the space, while being an expression of the power of people to build something in space. Kikutake argued that the ideal “form” of metabolic architecture, which does not determine the functions of a space, but lets people create new functions, is one that, apart from reflecting the laws of nature, tries to endow an external form on whatever cannot be captured merely by the senses.
Wyn Evans’s installation also endeavors to give form to the invisible, and to connect natural phenomena and human activities through the space that expands around the columns. In this space, the spectator is summoned to become an actor mediating the dramatic transformation of the space. His sculptural devices, like simple gestures, suggest that both Noguchi’s stone garden and Tange’s architectural design correspond to the fundamental principles of traditional Japanese architecture, covertly revealing the artist’s aims to be containing past cultural contexts, and encouraging spectators to expand their senses.

Midori Matsui, a Tokyo-based art critic, has extensively published on contemporary Japanese art in many books and exhibition catalogues including Super Rat: Chim↑Pom(Tokyo, Parco. Co. Ltd, 2012); Ice Cream (London: Phaidon, 2007), Little Boy: the Art of Japan’s Exploding Subculture (Japan Society and Yale University Press, 2005). Her books include: Art in the New World (Tokyo: Asahi Press, 2002); The Door into Summer: The Age of Micropop(, for Art Center Mito, Japan, and Winter Garden: The Exploration of the Micropop Imagination in Contemporary Japanese Art in 2009.