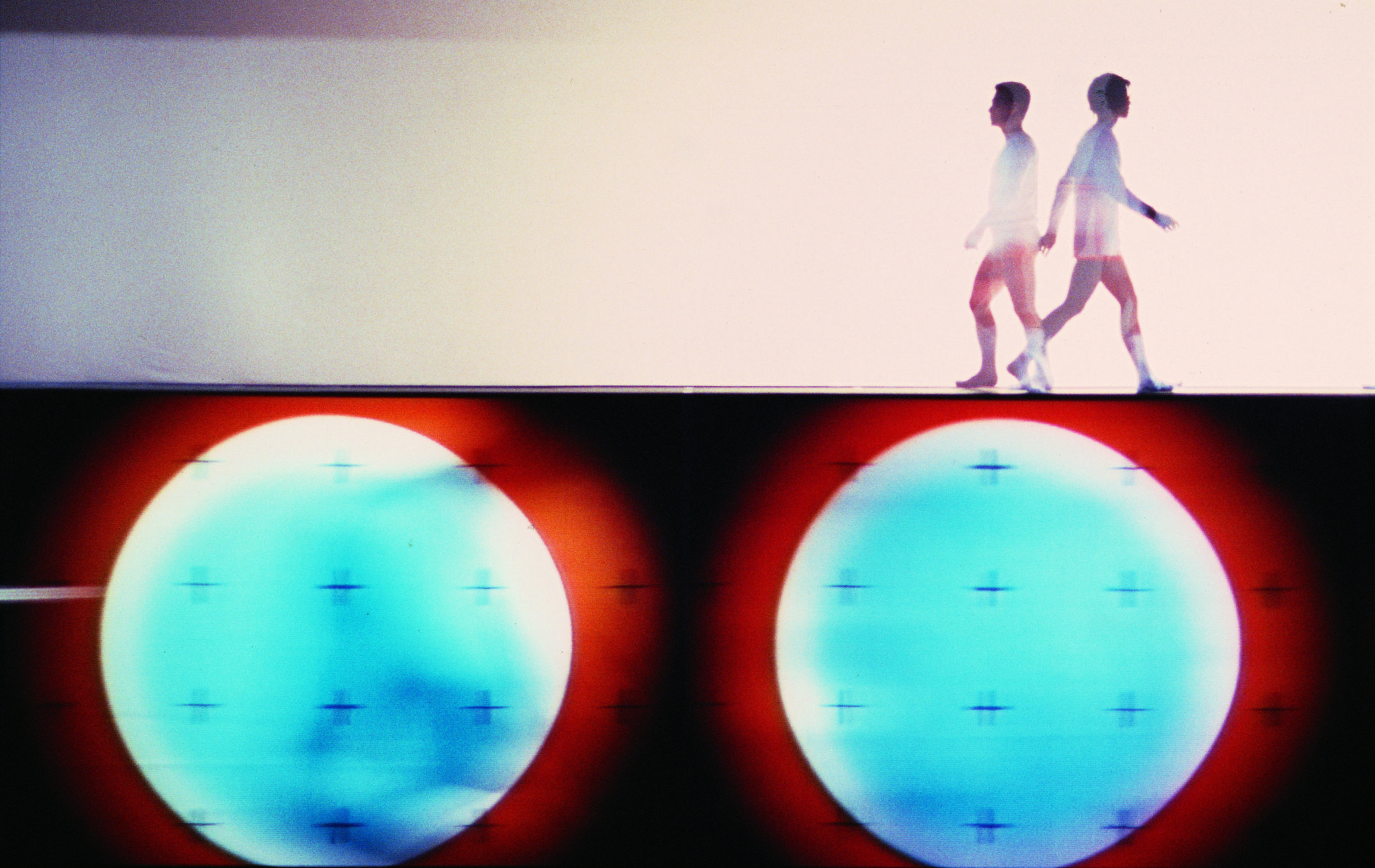 The Dumb Type exhibition at the Museum of Contemporary Art Tokyo (MOT) upgrades the critically-acclaimed monographic exhibition held at the Centre Pompidou-Metz (2018), featuring additional reworkings of past works, with a plethora of documentary materials from the Dumb Type archives. Dumb Type is a collective formed by students of Kyoto Art University in 1984, borne out of both frustration and desire. Frustrated with categorizations and the static limitations of rigid structures in the art and theater scenes at the time, they abandoned categories and institutional hierarchies, and were driven by the desires of people from diverse backgrounds working together in a total interdisciplinary approach. Focusing on an experimental theater that discarded dialogue – hence the “dumb” in the name – and instead combined different media such as film, movement, painting, sculpture, installation and music. It isn’t entirely devoid of words though, but words are used as images recycled from quotes from various sources. These visual elements call attention to themselves as images, products of the excess of the commercial/capitalist image-producing industries, and therefore as pieces of the vast and intricate mosaic of information, entertainment, and persuasion that constitute the media-saturated environment of modern Japanese life.
The aim of Dumb Type is explained in their name: “overstuffed with information, but cognisant of nothing.” (Teiji Furuhashi, interviewed by C. Lutfy, Tokyo Journal, 1994)

In addition to six large-scale installations, the show features important documents, objects, and videos of past performances from archives. Together with testimonies, the displays retrace the genealogy of the group, before and after the death of their central member, Teiji Furuhashi, in 1995.
The exhibition brings together 35 years of work by the group in retrospective. 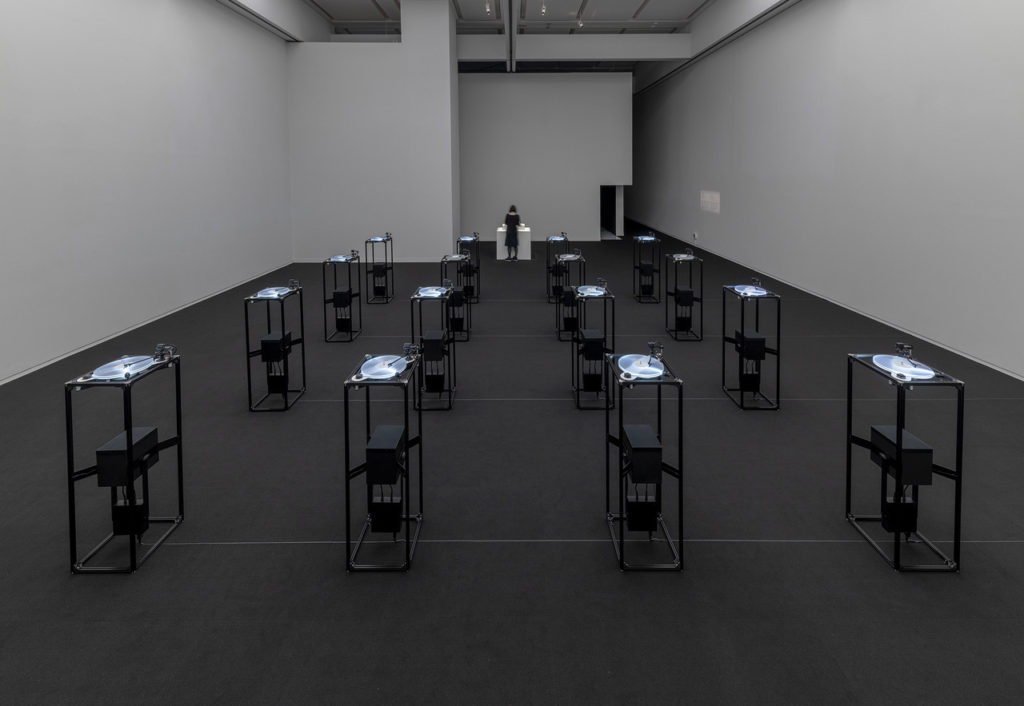 Upon entering the exhibition space, you are greeted with wall-mounted plates of past Dumb Type performances and installation diagrams, acting as an overture of sorts. In the next room, you can see the work Playback (2018), a sound installation of sixteen wireframe stands for turntables with speakers, remade in 2018 from a previous sound installation based on the 1988 performance, Pleasure Life. Music from Toru Yamanaka and Teiji Furuhashi is mixed with odd vocal variations of English language lessons, greetings in 55 languages from the data disc launched into space on the 1977 NASA probe Voyager, and new field recordings. The sound installation sets the tone for a mindset that goes on a voyage towards a dense and well-archived body of work overflowing with text, sound, and moving images, yet somehow organized with clinical precision and conciseness.

The large scale installations unfold like well-timed movements of notes in musical bars (segments of time corresponding to a specific number of beats). Between the larger installations are small archive presentations that act like rests in musical notation, sometimes even as dotted rests that complement the larger scaled installations. From video excerpts, an archival book filled with set designs, conceptual and technical notes, to posters and various objects, even actual pieces of scenography – together all of these come across as a well-spaced, well-timed composition of a musical score. Dumb Type challenges the viewer to apprehend hidden elements located within various spatial experiences as you move along the exhibition. 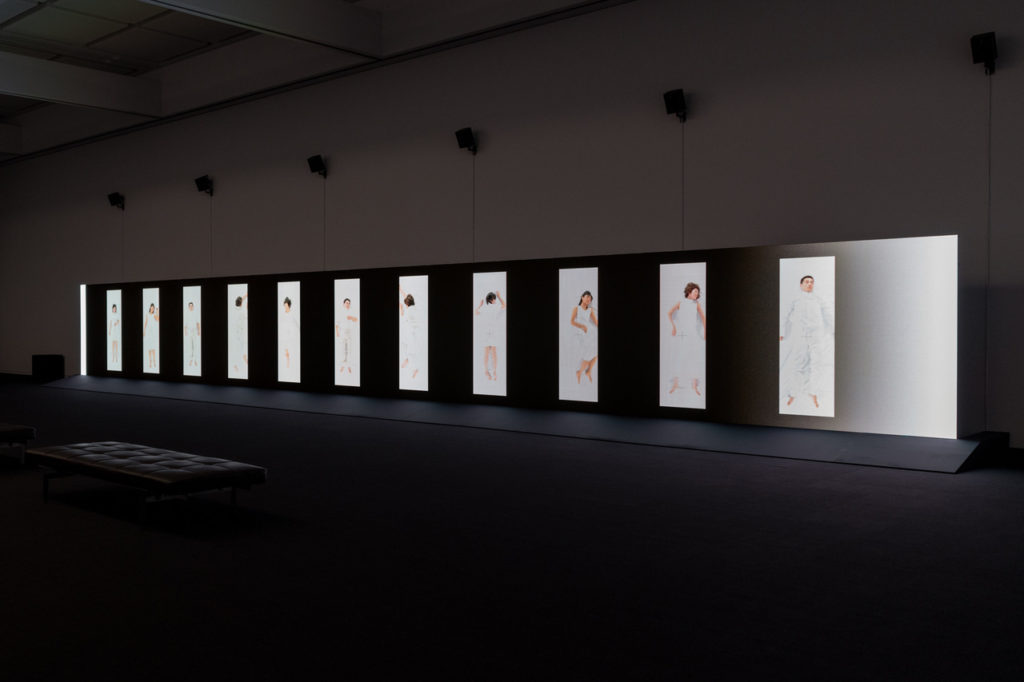 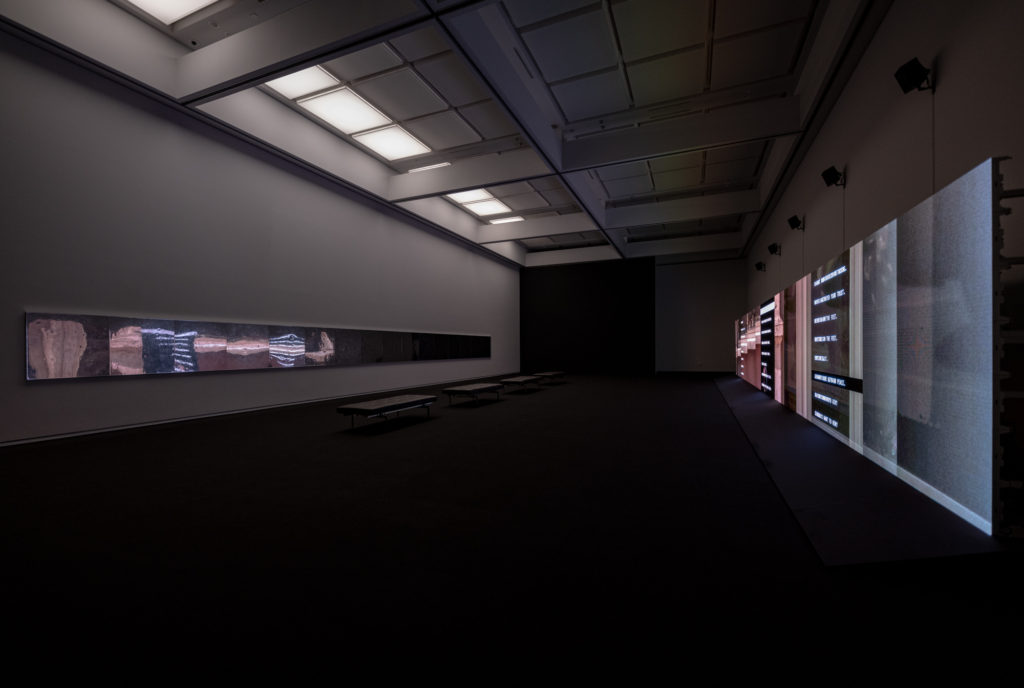 For example, the video installation MEMORANDUM OR VOYAGE (2014) recreates and combines three famous Dumb Type performance works with new video material: OR (1997), memorandum (1999), and Voyage (2002). It is presented alongside another wall-mounted installation, Trace-16 (2019), the original reflective stage flooring that is part of the set of Voyage. Both pieces are installed on opposing walls, so that the video images are reflected in the respective other work like in a mirror reflecting remnants of past performances, challenging the audience’s senses in terms of both visual perception and spatial experience, akin to the state of in-betweenness or “Ma”(間).
The remarkable complexity and diversity of the three works can only be abridged by processes of categorization. MEMORANDUM combines technology that is advanced and simple at the same time; cerebral and kitsch, topics about utopian politics, and collective activism; about individualism, subjectivity, human desires, and aesthetic failures. OR use audio-visual scenography to explore human experiences through sensory politics of experience: between consciousness and human perception, and the moment between life and death. VOYAGE plays with vertical scan lines that transform into topographical maps, with projections of text from Darwin’s 1839 The Voyage of the Beagle, and overlaid with the route of the HMS Beagle. VOYAGE examines the uncertainty and dislocation of the modern world, slowly unfolding the world map through a journey as the video progresses. 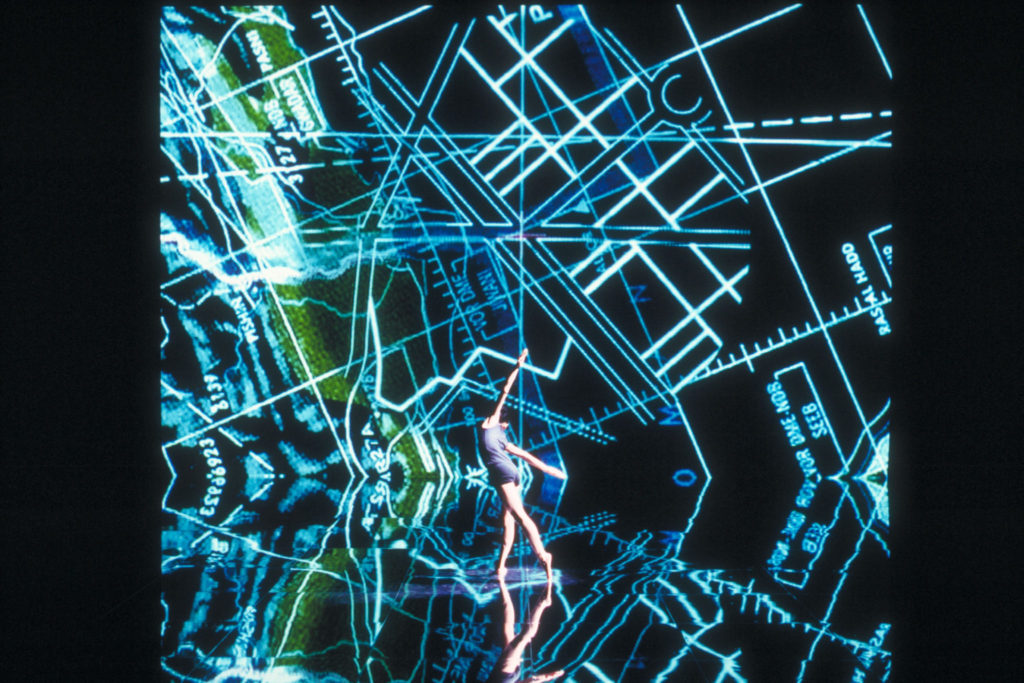 Between these “movements” in the show, a clear and “multimeasured rest” awaits you in the only room with windows. This room houses an extensive and very detailed chart with Dumb Type activities, plotted on a calendar and accentuated with objects, film reels, tapes, and various archival materials. Being the only room with windows, if you visit during the day, the remarkable feeling of the sunlight invites you to take your time through this archival map of sorts. 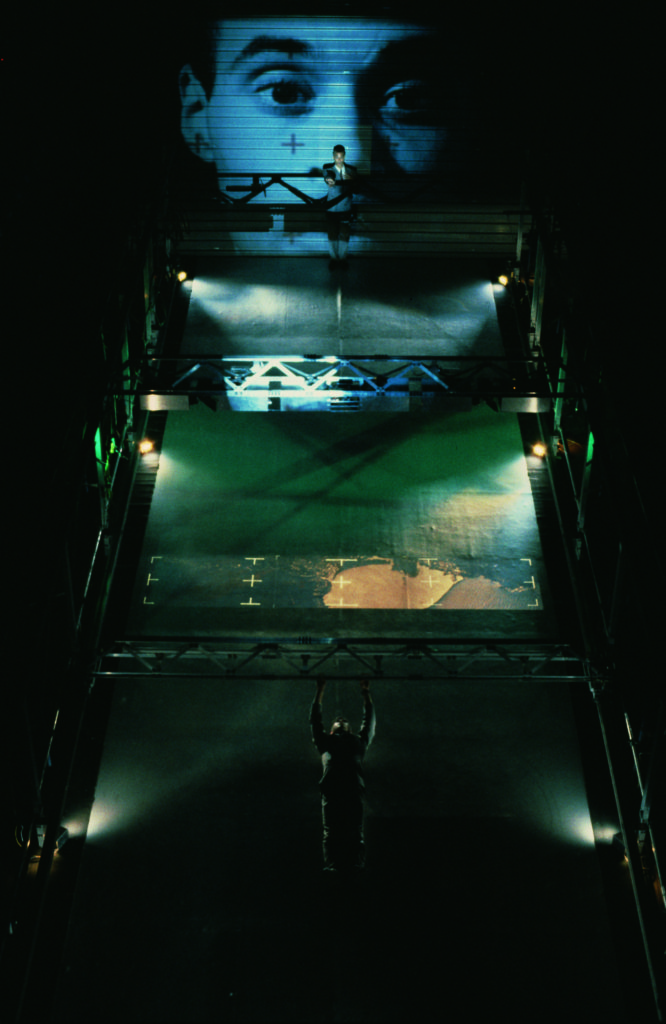 The artworks that bookend the exhibition take you deep into the darkest room in the show, where you are confronted with two works: pH (2018) and LOVE/SEX/DEATH/MONEY/LIFE (2018).
pH (2018) is a massive installation that encourages the visitor to walk through an empty performance floor filled with text, as an LED crossbeam sweeps back and forth like a giant scanner or copy machine. pH is a recreated version based on the massive stage mechanism from the 1990 performance piece of the same title. pH doesn’t really have a specific theme, but the name is taken from a scientific term which transposed the 13-level acid/alkaline chemistry scale into “phases” that translate into various opposing social concepts (i.e. question/answer, fact/fiction, public/private, etc.) balanced in pH7 – the center of the scale. The scanner mechanism suggests that the work explores themes of global capitalist iconography and themes of surveillance, as the performers (from the original performance) are reduced to objects within a scanning machine – an oppressive disciplinary technology of global capitalism. 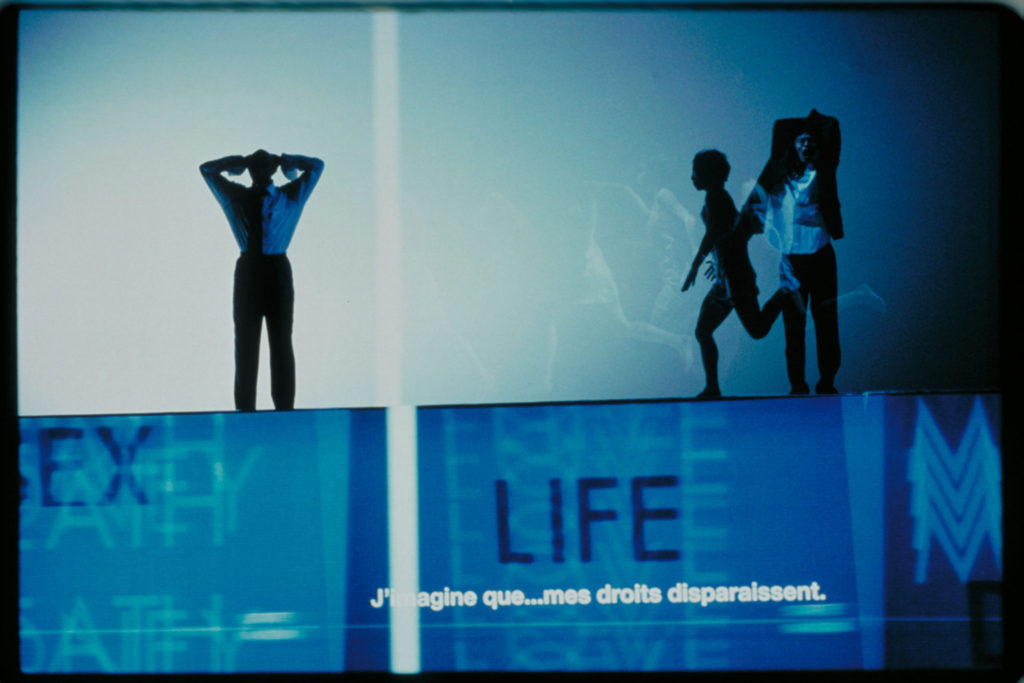 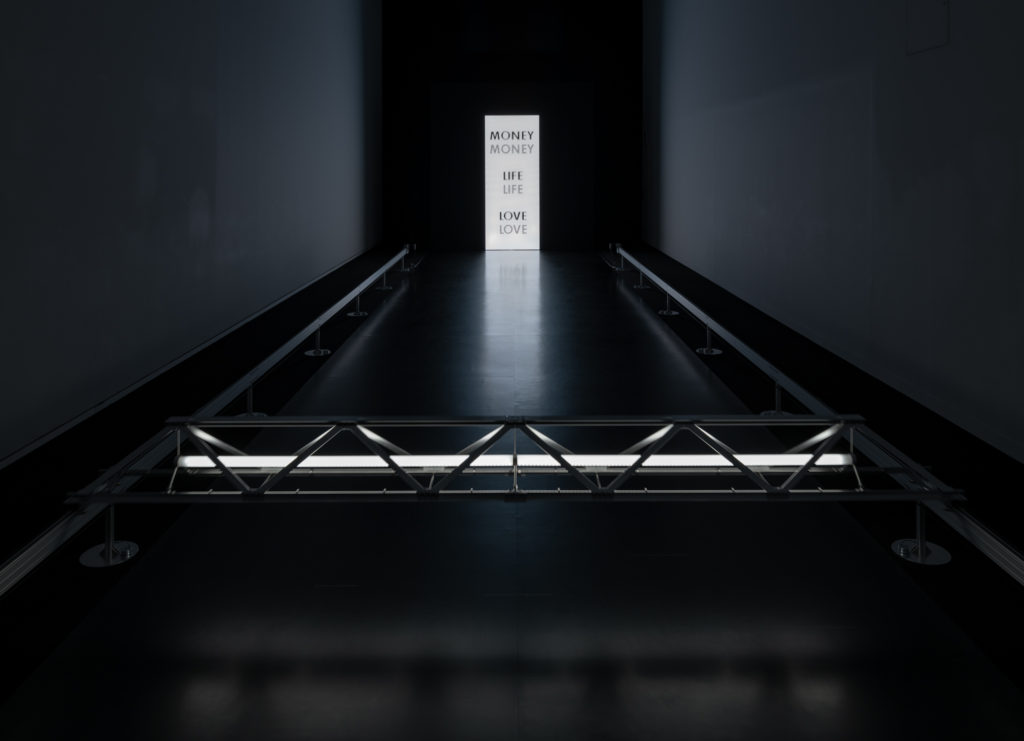 LOVE/SEX/DEATH/MONEY/LIFE (2018) is a video installation that was originally created for the exhibition Of the Human Condition: Hope and Despair at the End of the Century in 1994, and reproduced for Centre Pompidou-Metz in 2018. It is composed of text visuals featured in the stage projections in the iconic performance S/N (1994). Dumb Type applied the concept of the “signal/noise” ratio from electrical engineering, to discuss the politics of identity and sexuality, social issues of HIV/AIDS, race/nationality, and discrimination in various communities, particularly discrimination of gay men.
The video installation stands tall with monolithic omnipresence over the giant scanner of pH, presenting a powerful visual as if both of the works belong together. It is important to note that S/N was made after Furuhashi informed the members of his HIV/AIDS infection. 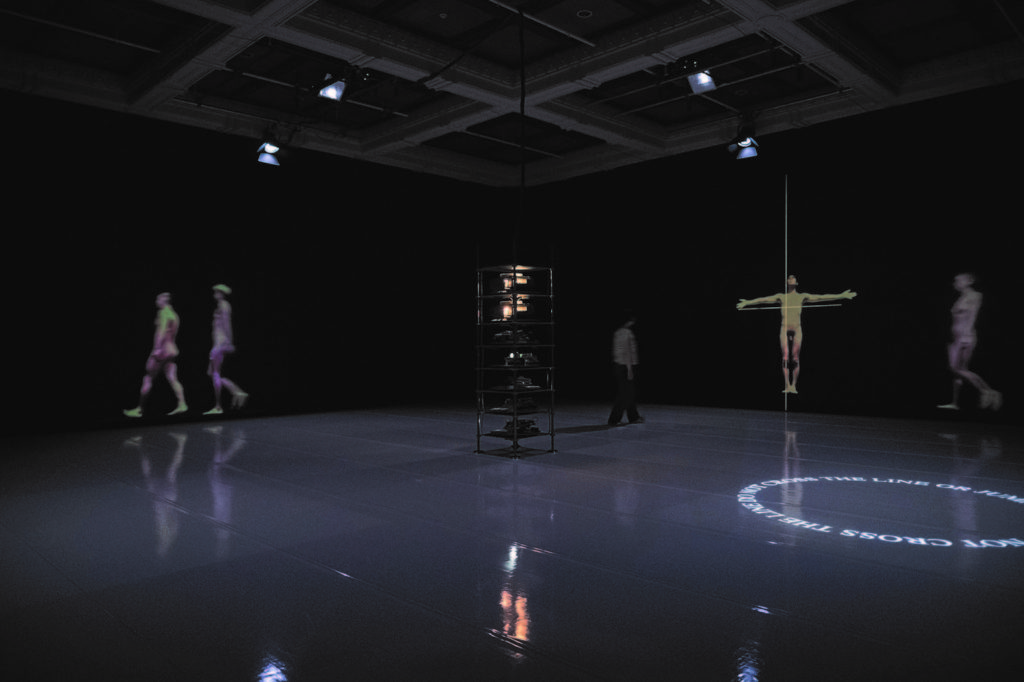 In relation to this, I think the last piece that stood out from the whole exhibition (and which I went back to view twice) is Teiji Furuhashi’s final solo work, LOVERS (1995). (Exhibited until Jan. 19,2020)
The artist was months away from dying of AIDS-related complications, and LOVERS is his magnum opus. Erected in the center of the room is a totem-like pole made up of rotating projectors, accompanied by haunting sounds and apparition-like projections of ghostly nude performers that walk and run around the walls on all sides of the room, and periodically stop in front of your body. This “totem” is in fact fitted with infrared sensors, as if the work itself was a sentient being that senses other sentient bodies in the room. Members of Dumb Type are features as characters that walk, run, and embrace as the projections overlap. There are moments of poignant beauty when the silhouette of the artist comes to meet the visitor, stands crucified with arms outstretched at the crosshairs of vertical and horizontal lines, before disappearing in the moment of embrace, and fading into nothingness beyond the gallery walls.

Tengal is an intermedia artist, researcher, and cultural producer. He has been involved in research-based production bridging art, technology, music, and society in Manila and Southeast Asian region since 2005. He founded the art organization SABAW Media Art Kitchen in Manila as a curatorial platform that initiated the Philippines’ first international media art festival and symposium, WSK Festival of the Recently Possible. He curated the INTERSTICES: Manifolds of The In-between exhibition with the Japan Foundation Asia Center and last Feb 2018 was the guest director for「self-reflexivity: Thinking Media and Digital Articulations」exhibition for MeCA | Media Culture in Asia: A Transnational Platform, a Media art festival in Tokyo. Tengal was a recipient of the Asia Center Fellowship for Cultural and Intellectual Research, where he spent 6 months traveling all over Japan. In 2018, Tengal co-created the international platform Nusasonic, a creative collaboration between YES NO KLUB (Yogyakarta), WSK Festival of The Recently Possible (Manila), Playfreely/BlackKaji (Singapore), CTM Festival (Berlin) and Goethe Institut Southeast Asia. wsk.io