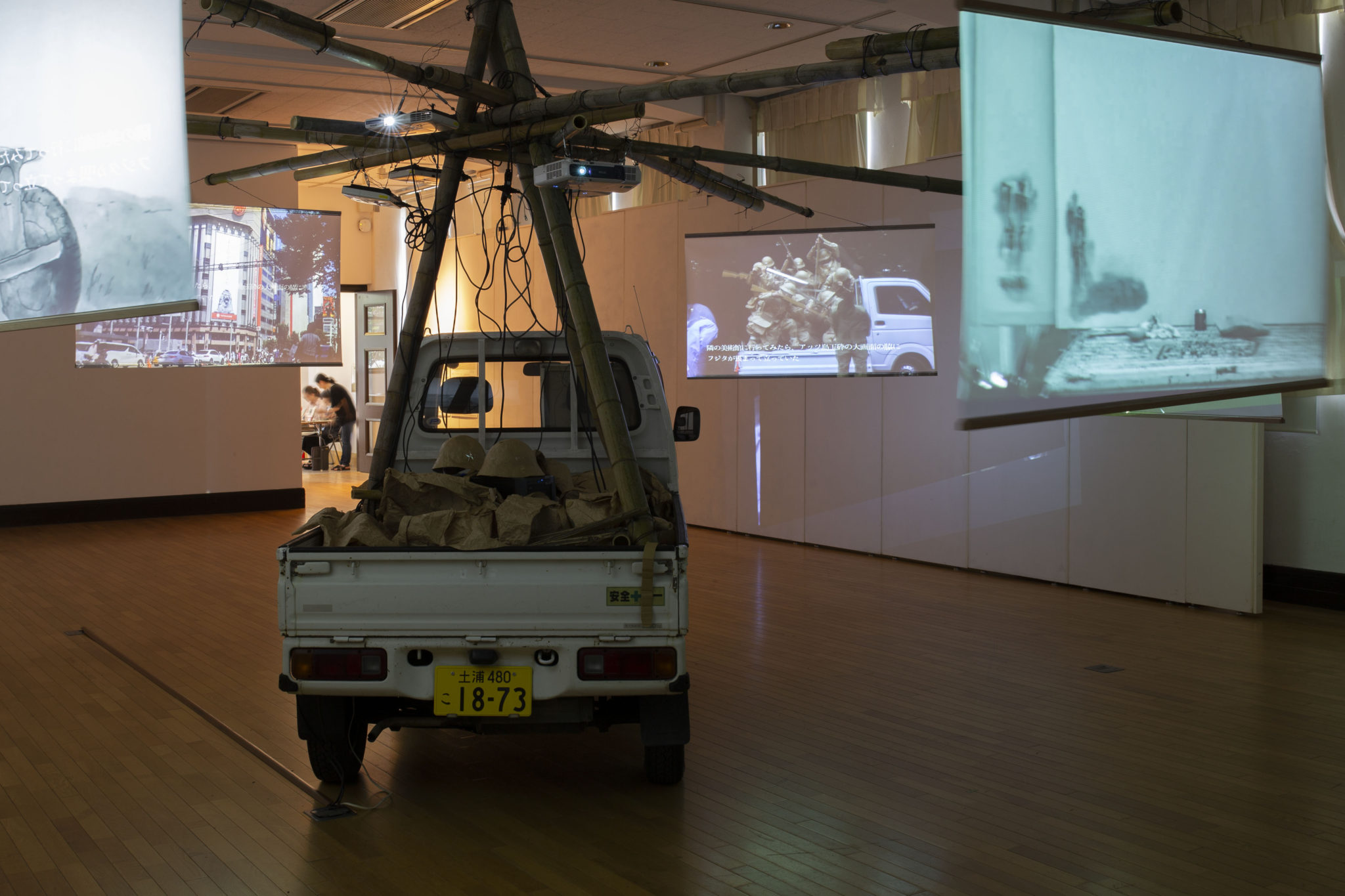 “Someone came into the classroom enthusing loudly about something exciting he had witnessed. If you go to the museum, you can see Tsuguji Fujita bow whenever someone puts 10 sen into the offertory box, he said. It was true. […] Next to the giant ‘Final Fighting on Attu,’ its creator Tsuguharu Foujita was standing up straight and motionless.” (Gyoji Nomiyama, “A Four Hundred Character Sketch (Yonhyaku-ji no dessan)” 1978).

This episode is from the time of the “All-out War Art Exhibition” at the Tokyo Prefectural Art Museum (which later became the Tokyo Metropolitan Art Museum) in September 1943, where Foujita exhibited “Final Fighting on Attu,” a large work that he voluntarily made and donated to the army once it was completed. The lines quoted above are the beginning of an essay about Foujita by Gyoji Nomiyama, who was enrolled at Tokyo Fine Arts School (now the Faculty of Fine Arts at the Tokyo University of the Arts) at the time of writing. It is at once the text that greets the visitor at the entrance to this exhibition. 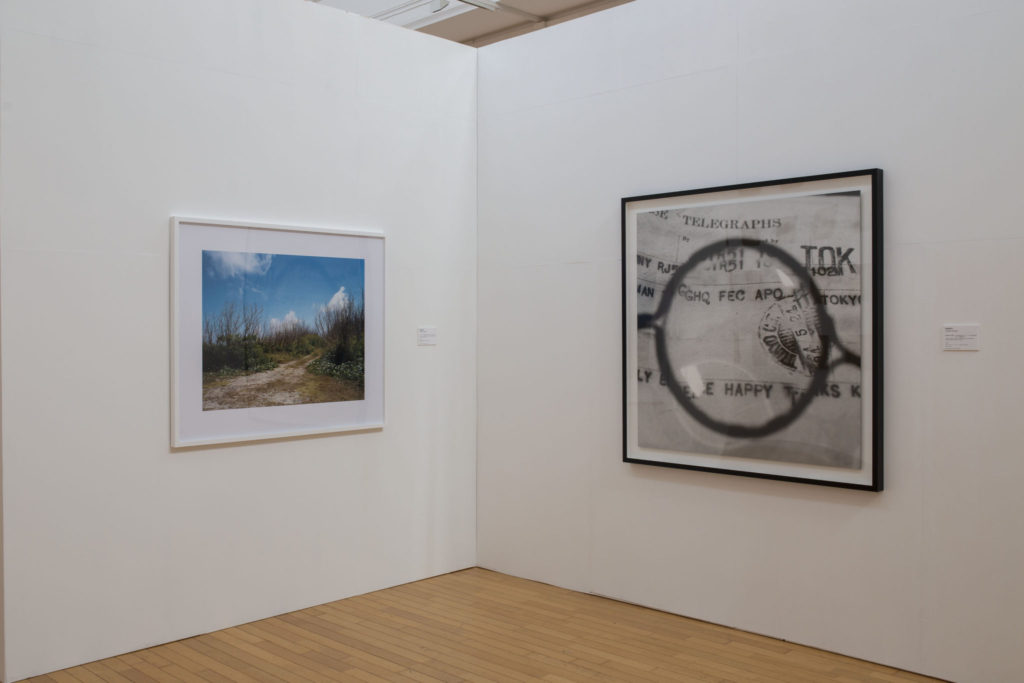 Tsuyoshi Ozawa had made Foujita the subject matter of his “The Return of Painter F” exhibition, and here, in the ground floor exhibition, space Ozawa’s Lab presented “The Return of Painter F, again.” Six monitors on a minitruck illustrate various events involving Foujita between September 1941 and his departure from Japan in March ’49. The videos of these reconstructed events were shot at and around the respective original locations (such as in front of Mitsukoshi Ginza, the venue of the private view of the “Futsuin junkai nihonga (“French Indochina Japanese Art Exhibition” tour)” exhibition; the site of the former Tokyo Prefectural Art Museum; and the remains of Foujita’s house and evacuation home), all set on a stage in the form of the minitruck’s loading platform. Especially funny (well, sorry!) was the ”Final Fighting on Attu 3D version” in scene 2. It was precisely a “living painting” featuring students in military guise complete with paper uniforms, helmets and bayonets. The gangway of the Pan Am airplane that Foujita boarded to bid farewell to Japan was recreated using a silver stepladder, and the way it was shaking and wobbling on the truck’s platform evoked ambivalent feelings as it looked totally unstable and at once just downright ridiculous. 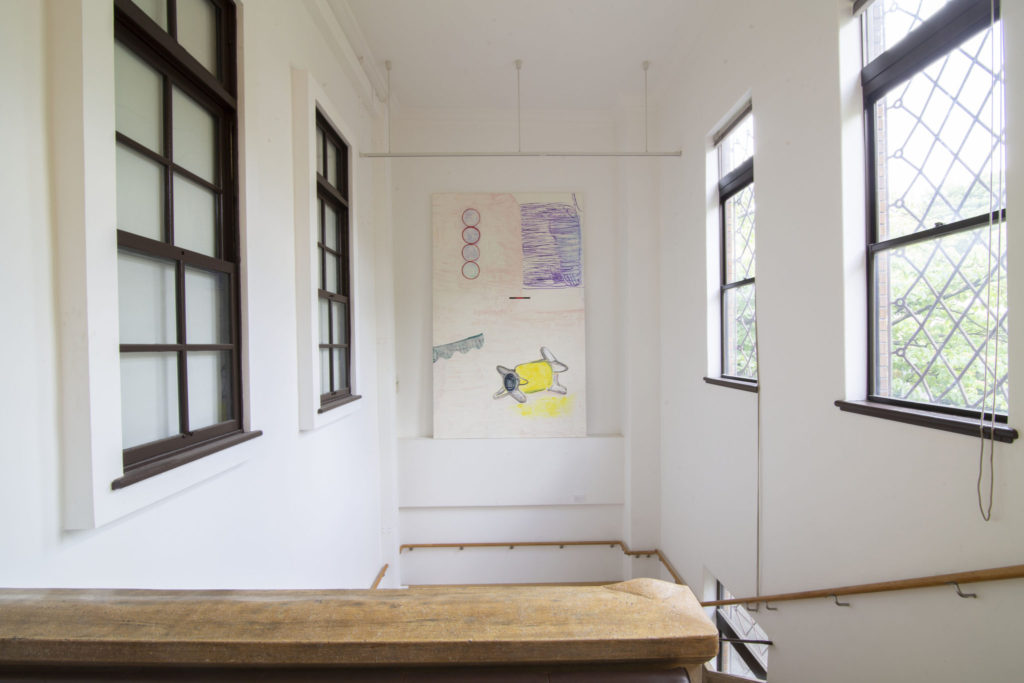 Exhibited at the stair landing was O JUN’s work themed on Fujita’s sewing kit, and on the first floor, works by Haruko Sasakawa illustrating the sky as it must have appeared to the soldiers in Foujita’s war paintings; Kota Hirakawa’s versions of Foujita’s “Compatriots on Saipan Island Remain Faithful to the End” and “The Fall of Singapore (Bukit Timah),” painted entirely in black; Tomoko Yoneda’s photographs of Foujita’s spectacles and the path up to the Banzai Cliff on Saipan island; Makoto Murata’s paintings of the upper half of Foujita’s “Tenno heika Ise no jingu ni gosanpai (The Japanese emperor worshipping at Ise Shrine);” and Takayuki Akimoto’s works painted onto small canvases using special materials so that the faces of soldiers who died in the war gradually appear over time. 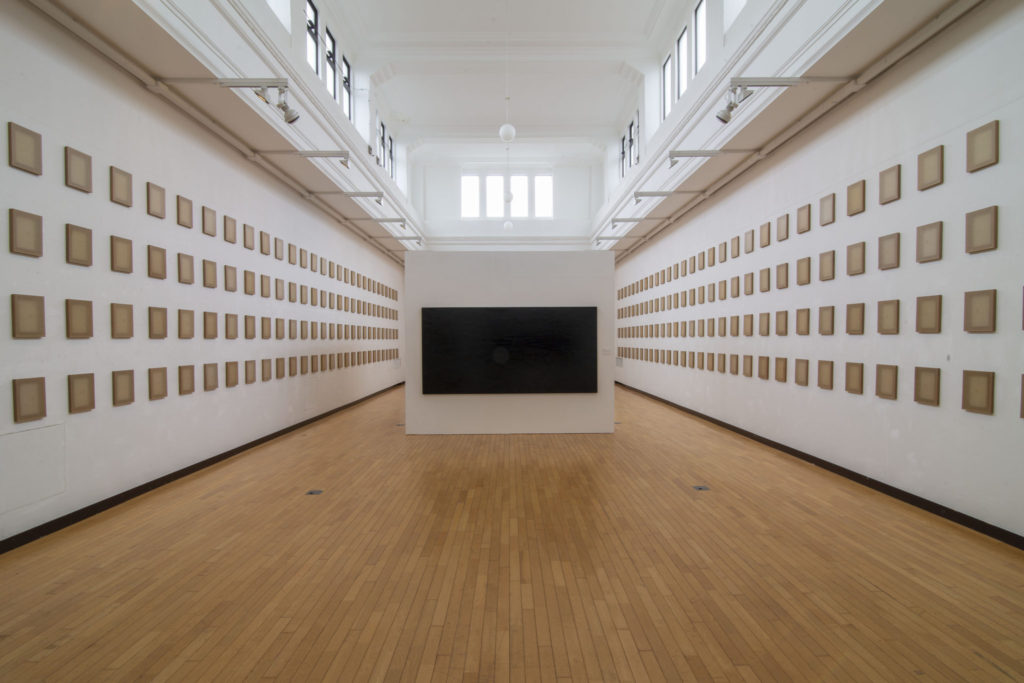 “Final Fighting on Attu” is shown at Ueno for the first time in 75 years. The return of this masterpiece to Ueno is certainly also an occasion for the spirit of Tsuguharu Foujita to return to the Tokyo Fine Arts School that he loved so much. This is a quiet yet dense exhibition that inspires contemplation on the past and the present, as the age that Foujita lived in recurs here once again.

Foujita in the 1940s: Tributes

Complementing “Foujita: A Retrospective – Commemorating the 50th Anniversary of his Death” (Tokyo Metropolitan Art Museum, 7.31-10.8 / The National Museum of Modern Art, Kyoto 10.19-12.16), where “Final Fighting on Attu” and “Compatriots on Saipan Island Remain Faithful to the End” are on display, this exhibition was curated mainly by Tsuyoshi Ozawa Lab (Professor of Tokyo University of the Arts, Department of Inter-Media Art), Yoko Hayashi (Art historian, Art and culture agent at the Agency for Cultural Affairs) and Haruko Sasakawa（Research assistant of Tokyo University of the Arts, Department of Inter-Media Art). Next to works by six individual creators and one group of contemporary artists, the exhibition includes a documentary section featuring photographer Iwata Nakayama’s portraits of Foujita; Foujita’s own sketches (private collection); diaries and copied photographs donated to the Tokyo University of the Arts by Foujita’s last wife Kimiyo; and Foujita’s books and collections of works published before the war.