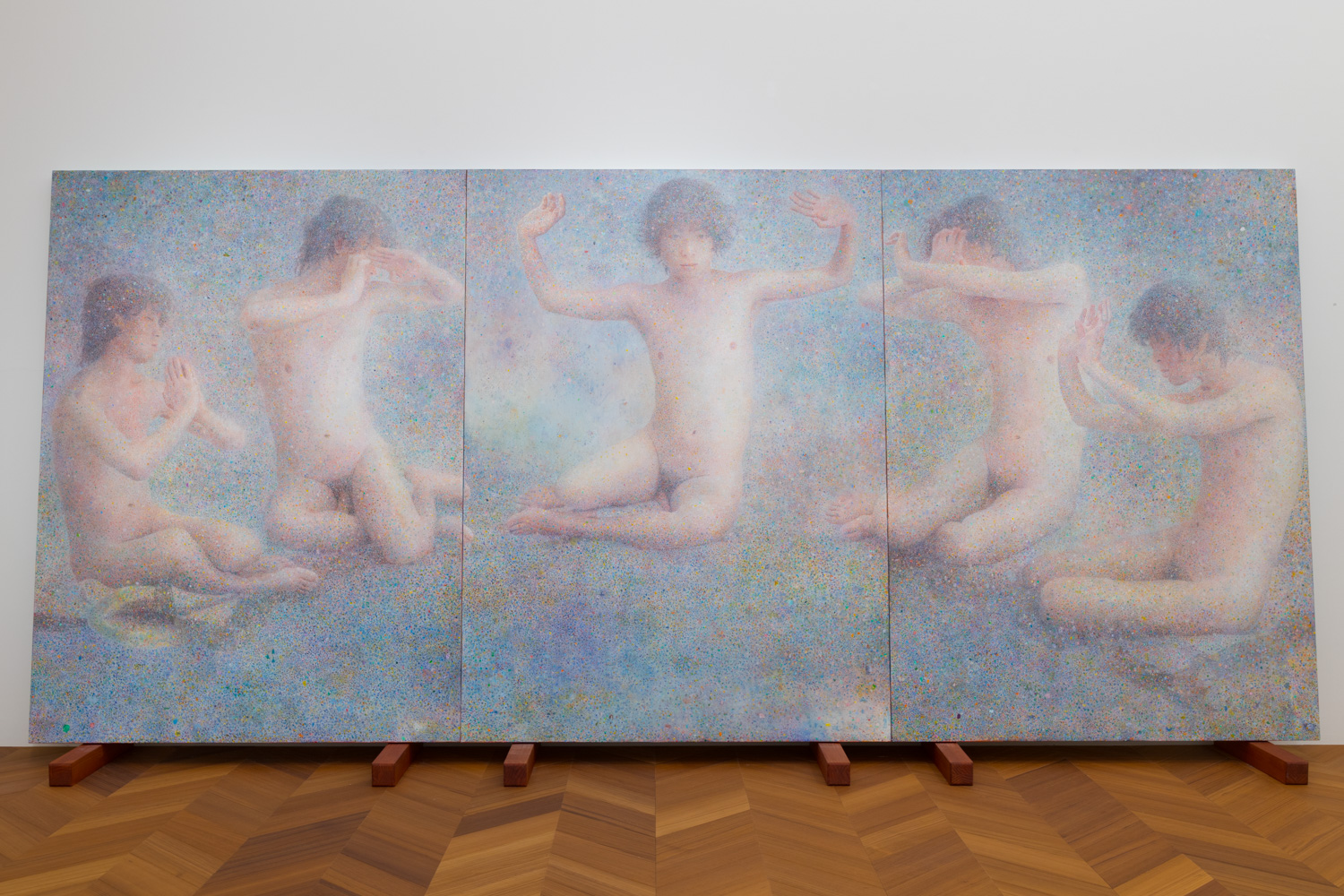 The venerable Nihombashi Mitsukoshi has been at the forefront of the practice of selling art at department stores since 1904, when it hosted an exhibition of belongings left behind by the Edo-period artist Ogata Korin. Its art gallery floor, which since 1907 – the year in which Mitsukoshi founded its own art department – has featured modern Japanese art, received a new addition in March this year, when the Mitsukoshi Contemporary Gallery opened its doors. Focused on contemporary art, the gallery in June hosted the “Full Frontal: Naked Circulator” exhibition, which sought to reorient the history of modern and contemporary art in Japan. The exhibition was curated by the artist Yoichi Umetsu, who also runs a gallery and operates the Parplume Yobiko school, which focuses on art education. “Full Frontal” was premised on Umetsu’s suspicion that the history of modern Japanese art from Tenshin Okakura onward is an underlying cause of the fact that what is considered contemporary art in Japan is mainly produced by and for a narrow cluster of professional painters and sculptors, connoisseurs, and art historians.

The exhibition was an effort by Umetsu to go beyond both the professional-amateur dichotomy and genre lines, including those of painting, sculpture, and crafts, to explore the mutually resonant relationships of artworks selected by the curator but created by everyone from renowned masters such as Taikan Yokoyama to up-and-coming artists from Parplume. The displays began with Part 1, “Miasma and Filters,” which posed the question of whether these resonant relationships, as invisible to the eye as the spread of pollen, could be picked up by the physicality of paints and the canvas that supports them and take shape in the form of paintings. This was followed by four other sections, entitled respectively “The Energy of the Gaze. Seeing and Being Seen,” “Dark Fantasy,” “A Room With a View,” and “Indeterminate Inflammation.” The exhibition space had been meticulously ordered by Umetsu so that visitors would walk through it as intended, passing by 64 artworks courtesy of 39 different artists – including Umetsu himself – along the way. 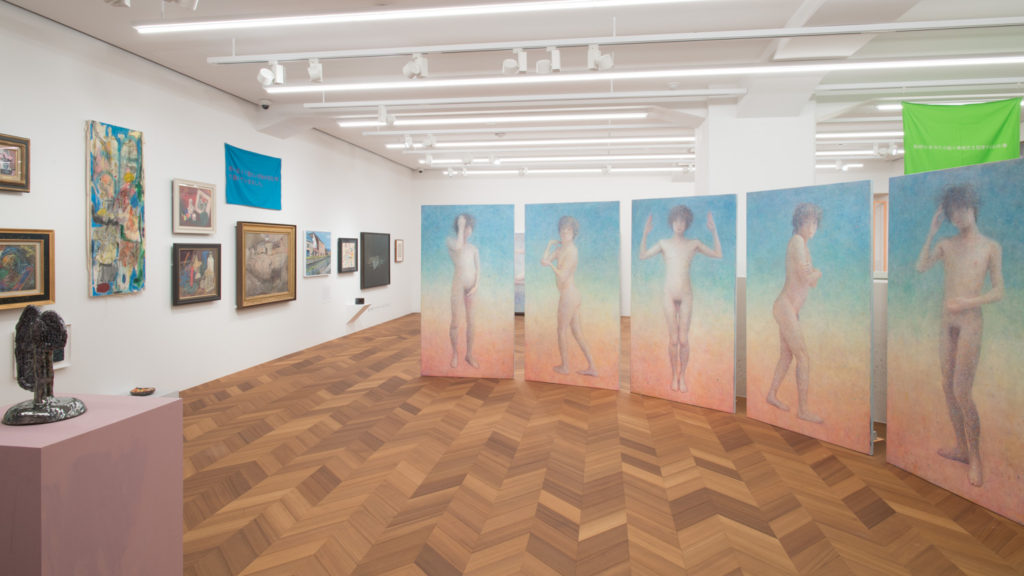 Upon entering the gallery, one would notice a green flag set up above the reception counter. It was inscribed with the sentence “Working to impede the art history spun by you wise people.” The phrase “You wise people” had a highly ironic ring to it, because this very exhibition was nothing if not a “reordering of art history” executed by the “wise” Umetsu himself. That is of course a conflict that Umetsu is aware of, as the exhibition statement “The smuggling and negotiations conducted between one’s inner artist and one’s inner curator is a duality that needs to be taken into account” suggests. The content of the exhibition, however, relayed the urgency felt by the man behind it to “attempt, despite this awareness, a reordering of the history of modern and contemporary Japanese art.”

Though a sense of urgency could be felt underlying the exhibition, it also provided plenty of laughs. For example, Part 1 featured a panel with a chart titled “Today’s Painting,” which described the evolution of modern art in the West. The chart was originally published in the October 1953 issue of the monthly art magazine Atelier, but was rather peculiar: Surrealism influenced Klee, and Rouault and Kandinsky were inspired by Fauvism?? To top it all off, the chart was drawn up by Alfred Barr Jr., the first director of the Museum of Modern Art in New York City, showing that how artworks and their genealogies are evaluated varies widely depending on the time period – a discovery that inspired a spontaneous burst of laughter.

In the “Dark Fantasy” section, works by the Nihonga painter Tatsuo Takayama, who in his youth was heavily influenced by Gauguin, were juxtaposed with Umetsu’s ceramics. These took the shape of palm trees and the aircraft carrier Kaga – a reference to Umetsu’s grandfather’s younger brother, who was part of the Kaga’s crew and died in the attack on Pearl Harbor. This comparison hinted at the dark side of the “tropical fantasy” once pursued by the developed nations of the world. The same section also contained a Hanjiro Sakamoto sketch of a horse carrying a load of daikon radishes. When seen in the context of the works around it, the radishes came to resemble wings, bringing a grin to this reviewer’s face; “Are you Pegasus or what?”

Next up was “A Room With a View,” which felt like a space for relaxation with all its humorous quirks. These were too numerous to all be mentioned here, but included a Taikan Yokoyama painting of Mt. Fuji with birds, placed strategically next to a Keisuke Yamamoto installation (“Birds Are My Friends”) that included a birdhouse. Moreover, in front of the Taikan piece stood a tiny ceramic work by Umetsu called “Misshitsu” (“Closed Room”), created by imitating the two-by-four method of modern house-building. Despite supposedly being “closed,” this piece had a small window through which Taikan’s mountain could be admired. 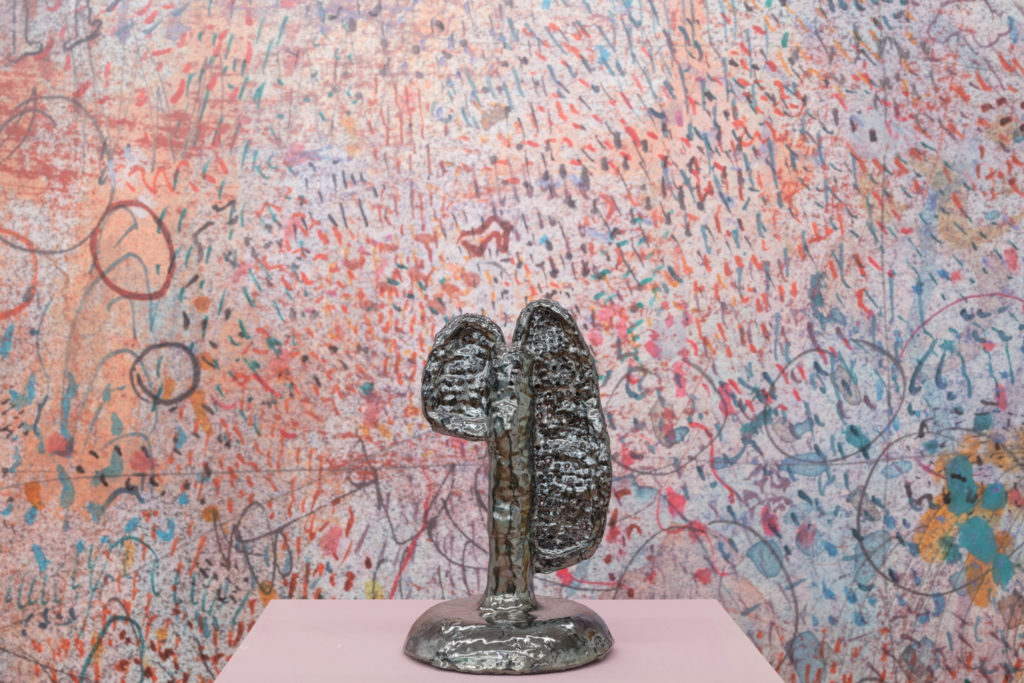 The last section, “Indeterminate Inflammation,” recounted the influence of Informalism-inspired art on post-World War II Japan. Particularly striking here were Toshiyuki Hasegawa’s “Umi” (“Sea”), a piece that was once displayed at the Mitsukoshi Art Gallery and appears to alternate constantly between the concrete and the abstract, and a passion-filled sketch by the conceptual artist Yutaka Matsuzawa, which exudes the physicality associated with the artist’s early career and which Matsuzawa forbid from being displayed before his death. These pieces were exhibited on an equal footing with works by young artists and potters. It seemed that picking up the invisible thread that binds these variant artworks together would require a high level of art literacy on the viewer’s part – a gamble that added to the exhibition’s charm.

The exhibition title, “Full Frontal,” was taken from a piece by Umetsu himself – one that suggests a correspondence with the European art that has influenced modern Japanese art. Displayed in Part 1, it is a series of nude self-portraits that expands on Seiki Kuroda’s “Chi, Kan, Jo” (“Wisdom, Impression, Sentiment”). Five works from the series were exhibited this time, but Umetsu plans to expand it to 11 paintings. With “Full Frontal,” he has used his own body to accept the challenge set out by Kuroda, who sought to accomplish the depiction of the Western, ideal female nude with Japanese bodies. Umetsu is no stranger to exposing his naked form, having displayed it in a work titled “Hiru – Kukyo na shukusai to uchinaru kyodotai ni tsuite” (“Day – About a Festival of Emptiness and an Inner Community”), which is based on the Swiss painter Ferdinand Hodler’s allegorical piece “Day.” While rethinking the meaning of the body in modern painting, Umetsu appears to go back to the very basics, to the elements that compose a painting (dots, lines, and the surface, the matière of paints and other materials, the materiality of supportive matter, and so on), attempting to reconstruct them.

The study of art history can certainly give rise to authority, but it is also a practice that, through a re-reading of the diverse backgrounds of individual artists and artworks, furthers our understanding of specific time periods and works. Though Umetsu’s project should clearly be seen in this context, why does he bring up “you wise people”? At the gallery, he enthusiastically explained each piece on display to visitors. Why, then, use this one-sided (and, in a roundabout way, “authoritative”) phrase for an exhibition that demands a high level of literacy from the audience? Having wholly enjoyed his resolute effort, this is my one kind-hearted complaint. 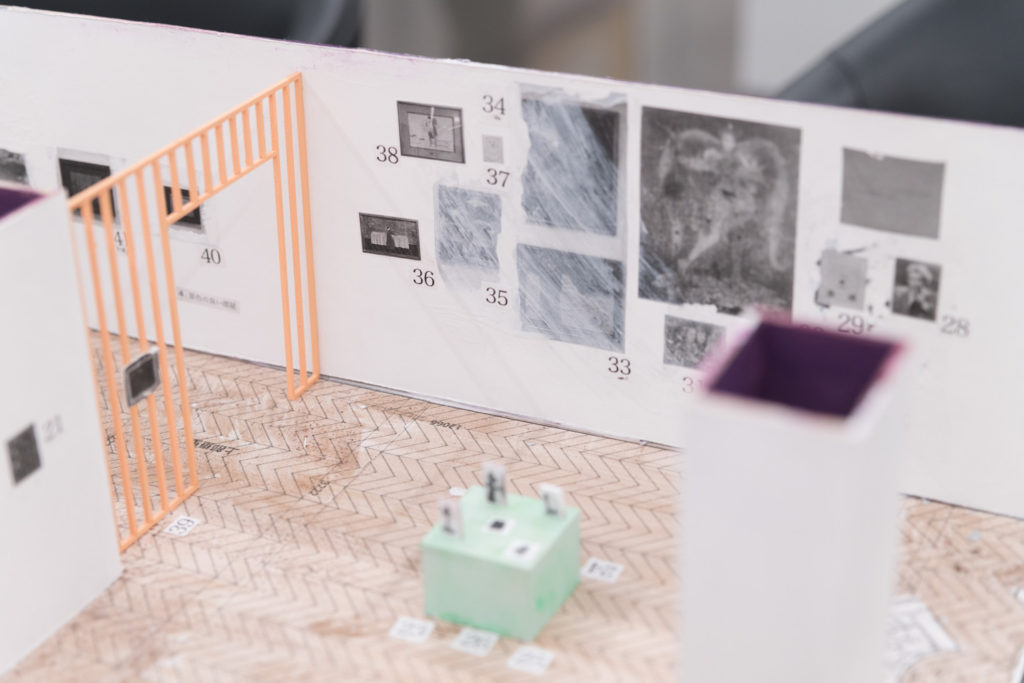 On another note, two days after I viewed the “Full Frontal” exhibition, it was visited by Seiji Yoshimura, a Nihonga painter, Nihon Bijutsuin member, and Tokyo University of the Arts associate professor who was holding an exhibition of his own in another gallery on the same floor. Yoshimura made a racially discriminatory comment toward one of the artists featured in the exhibition, who was explaining the work on display, and also made insulting comments toward young people and women. Parplume raised the issue on Twitter, describing Yoshimura’s comments in a post. This was in turn picked up by Hou Xo Que, who was exhibiting work simultaneously at Mitsukoshi as well as at Isetan, which is part of the same group of department stores. Que, who felt that the discriminatory comments also touched on his own background, published an open letter addressed to Isetan Mitsukoshi. (1)

There are hardly any commercial galleries that give equal treatment to contemporary art and work by artists who belong to artistic organizations established from the Meiji era onward, and these two worlds never cross at art museums’ exhibitions either. If Umetsu’s exhibition had been held at a contemporary art gallery in Ginza or Aoyama, the situation witnessed at “Full Frontal” probably never would have come to pass. Two parties, devoid of commonalities in either historical awareness or understanding of world affairs, suddenly crashed into each other. The conflict between young artists seeking to rethink the history of modern and contemporary art in Japan, and a painter belonging to a collective of artists that has been deeply involved with the formation of modern Japanese painting, in itself reveals the cultural discontinuity within the field of art that has taken form in the history of Japanese modern and contemporary art.

This historic “incident,” which happened precisely because its venue was a department store such as Mitsukoshi, will certainly not eliminate the aforementioned discontinuity. What if the students of Nihonga at Tokyo University of the Arts, being taught by a professor lacking both historical awareness and understanding of present-day gender issues – someone who doesn’t hesitate to say things like “I feel like I’m talking to a Chinese person,” “You can’t expect little girls barely over 20 to understand art,” and “As long as it uses nikawa (animal glue) and iwa-enogu (mineral pigments), it’s Nihonga” – will continue to reproduce such an ignorant and discriminatory view of history?

What truly matters, and will matter even more going forward, is the extent to which everyone involved with art, including artists, audiences, collectors, exhibition planners, and gallerists, will be able to reinterpret history and update their own positions on the issues. Once more, I’d like to express my thanks to “Full Frontal,” which offered the rare experience of thinking about the over-100-year history of modern and contemporary Japanese art while inspiring explosive emotions of anger and sadness.