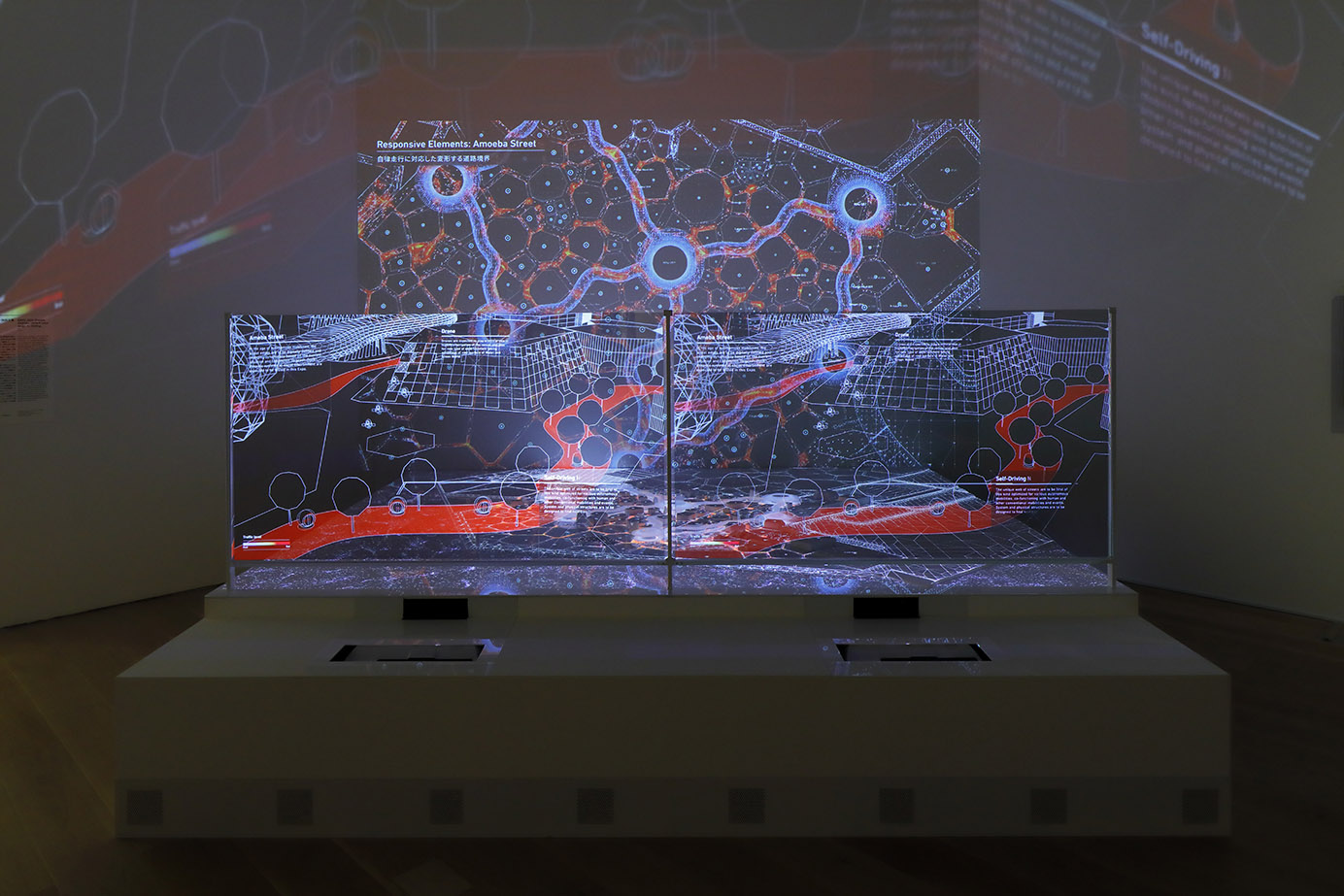 Following “Medicine and Art” and “The Universe and Art,” “Future and the Arts” was the final installment in a trilogy of exhibitions curated by Fumio Nanjo, who has been the Mori Art Museum’s director for 13 years. For myself, “Medicine and Art” with its displays of medical apparatus and materials, alongside works by star contemporary artists such as Damien Hirst and Jan Fabre, but also the likes of Leonardo da Vinci and Maruyama Okyo, was a particularly impressive exhibition. That was primarily due to the brilliant ability to bring items collected from an archaeological point of view into the realm of aesthetics, while focusing on the beauty within technology and creativity cultivated over the course of human history, and crossing the boundaries of art/non-art and past/present. Such ability is immensely important not only regarding the appreciation of things valued as works of art, but also for creative curatorial work that focuses on contextualization from a unique point of view.

Now let me share a few thoughts on “Future and the Arts” exhibition, with regard to the challenging contents of the whole trilogy. Divided into the sections “New Possibilities of Cities,” “Toward Neo-Metabolism Architecture,” “Lifestyle and Design Innovations,” “Human Augmentation and Its Ethical Issues” and “Society and Humans in Transformation,” it was a large-scale exhibition showcasing a variety of plans, case examples and works related to artificial cities, as well as cutting-edge technologies such as biotechnology, AI and robotics. Focusing among others on the Japanese “metabolism” movement in the 1960s, which likened architecture to a constantly metabolizing living organism, the first two “city” themed sections featured concepts for artificial cities and constructed environments using plants, microorganisms and other sources of renewable energy. The next sections were dedicated to AI and biotechnology, including displays showcasing current technical developments, and a discussion of ethical issues in a society that is penetrated by such technologies. Also introduced were services utilizing AI, image recognition and robotics, and even state-of-the-art artificial legs. Many of the examples on display concerned matters related to services, scientific experiments and urban design that are actually being discussed in society. In this respect, it was an exhibition that vividly conveyed the intent to promote a rather profound discussion of future issues by extending the scope of art, however I did feel somewhat uncomfortable about the use of both “future” and “art” in the exhibition title. 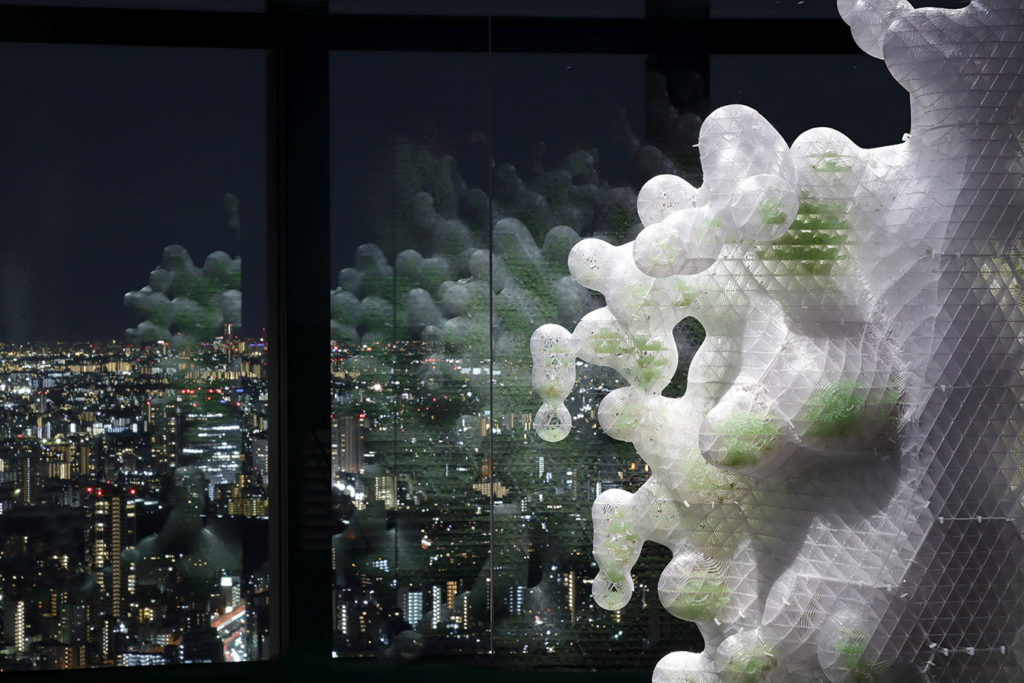 Firstly, “future” is one word that simply refers to the time to come. As part of the title of this exhibition, however, there seems to be something more to it. Here it possibly hints at an utopian kind of “future” as a result of capitalist progressivism and its credo of happiness achieved through technical development. In other words, it is the dream – or the order – of manmade technologies leading the way into the future and carving out a new age. Slogans like “Progress and Harmony for Mankind” at the Osaka Expo in 1970 give hope, move capital, and drive people. But when going back to the concept of tenses, the past is over, the present is happening now, and the future is yet to come.

It is also for this reason that there always exist also worries about the future. These uncertainties subliminally contain the desire that the time to come may be a bright and hopeful one, which, according to widely accepted belief, can be achieved through technology. Since the 20th century, even as worn-out as it sounds today, the formula of “a future built by technology” that drives technological progressivism, continues to stand as an accomplice of capitalism and its imposed mission of perpetual expansion, and at the same time, as a vanguard of the times. Nonetheless, when discussing the future from the standpoint of art, I believe that the project should at least have started with tearing down such visions that have been informed by political and economic goals. 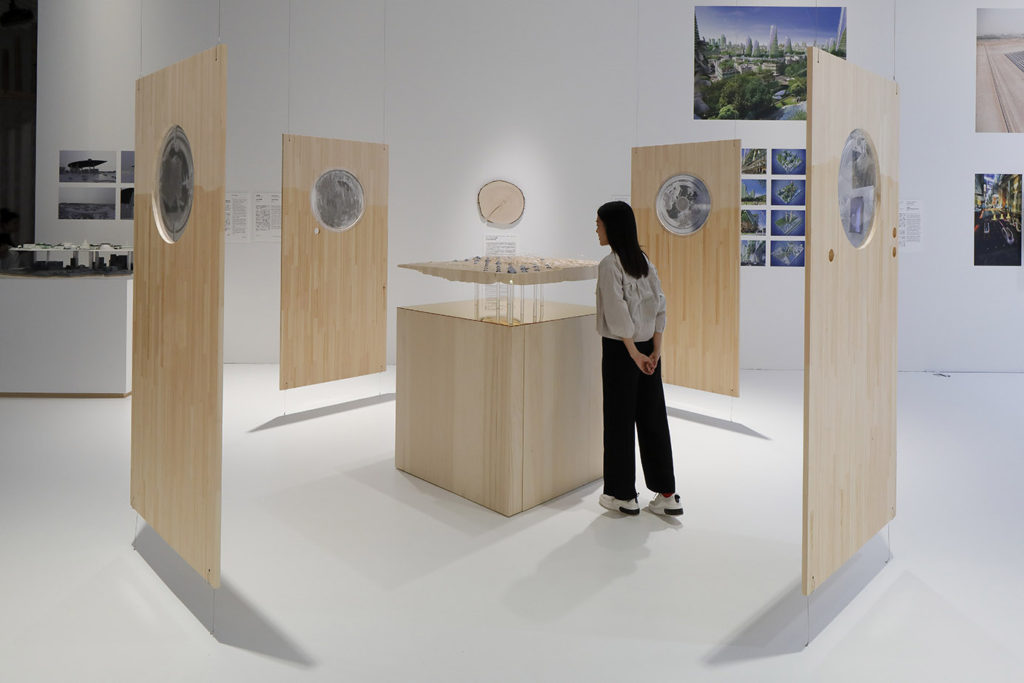 Most items included in this exhibition belonged to one of two main categories of works, either expressing ironical criticism of society as shaped by technology, or exploring the potential of new types of technology for the creation of an entirely new kind of future. Both are based on the idea of a “future created through manmade technologies.” But as a matter of fact, there also exists a future in the deeper layers of nature that are unaffected by technology. One may go even further and say that the future will come anyway, even without any technological development. Quite ironically, it was the premature closure of this exhibition due to COVID-19, that has made us understand how many of us haven’t even been aware of this possibility.

The virus forced us to suspend economic activities, and conceal ourselves, and ultimately confronted us humans, who self-confidently live in the “Anthropocene” – a period of history centered on the human being – with the fact that we are just one of the myriad lifeforms that inhabit the planet. What additionally magnified this unprecedented situation were the locomotion technologies that man has so excitedly developed. The function of technology as a catalyst for the spread is another thing that has become obvious. 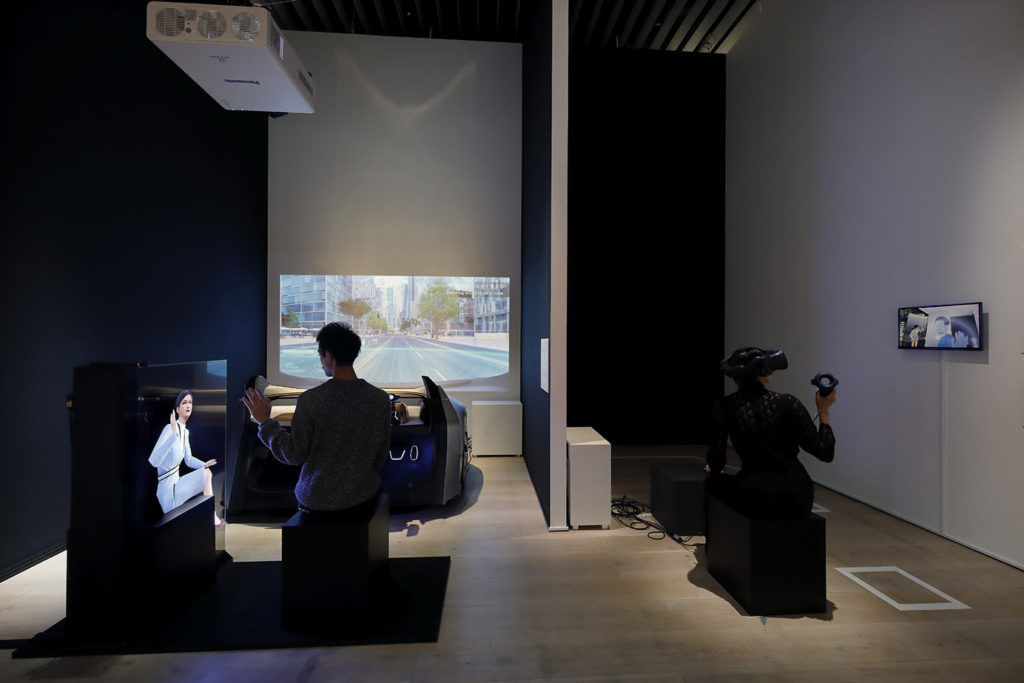 Furthermore, we are now realizing that the restrictions of everyday life have led to a decline of environmental pollution. While the virus, carried by manmade technologies, picked up speed and slowed down economic activity, nature has begun to regain its original shape, and this almost makes it all look like an admonishment from planet Earth itself. However, capitalism as forged by mankind in the process of modernization, has created new products out of debts, and continued to reap financial harvests larger than the initial funds. In other words, capitalism is all about flying kites and collecting the gains, and it has been operating with the disposition of a machine that has gotten out of control and keeps running without knowing how to stop. The fact that technology has been the driving force behind this makes clear how inseparably capitalism is tied to technological progress. However, “technology” does not equal “future,” and capitalism as we know it is not absolute. On the other side, art has nurtured aesthetic views and philosophical ideas that deviate from economic rationalism. For explorations of a possible future from the field of art, wouldn’t some ideas of the future that are not fueled by capitalism and technological progressivism, have been necessary? 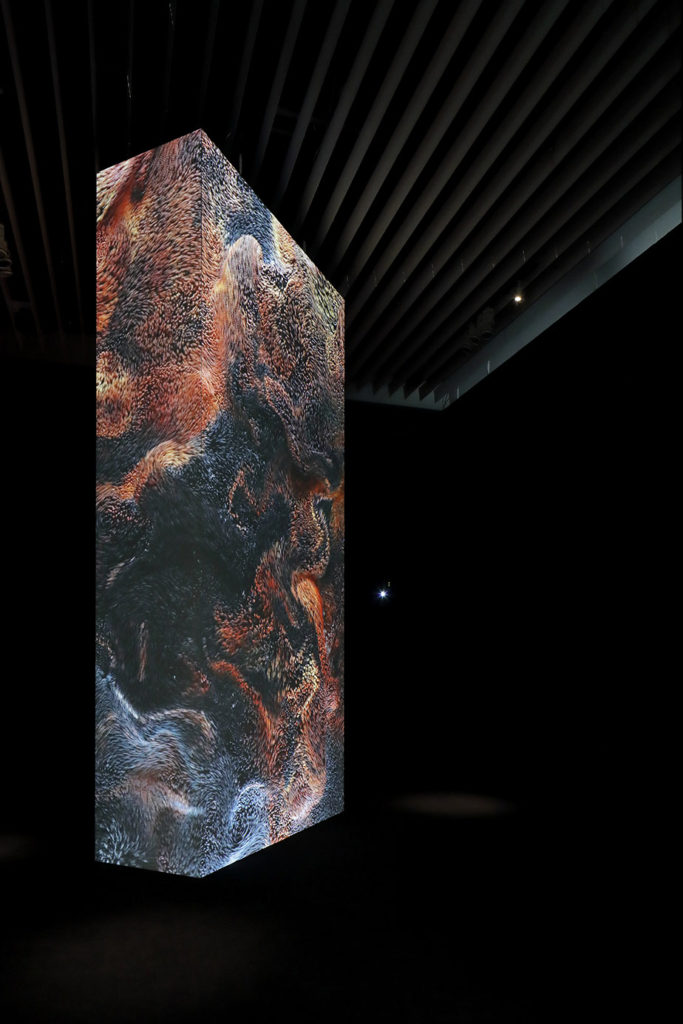 At a point where reality has presented us with something that no-one would have ever expected, it is not fair to talk like this about past concepts. However it is no longer possible to talk about the future without referring to the current situation.

Never before have there been so many doubts raised about the modern city that has backed up its authority by attracting people and creating situations of congestion. The centralization of power has been questioned frequently with slogans like postmodernism and decentralism in the past, but many of those concerned by the coronavirus and the turning point it has created are now certainly feeling the need for a new guideline to follow into the future. In this sense, it seems that a liberation from concepts of the past has become an essential premise.

Future and the Arts: AI, Robotics, Cities, Life - How Humanity Will Live Tomorrow

(Curator/co-director of Tokyo Art Acceleration). Graduated from the Graduate School of Film and New Media, Tokyo University of the Arts. Previously worked at the Tokyo Photographic Art Museum, the 21st Century Museum of Contemporary Art Kanazawa, and Art Tower Mito. Drawing on the expertise he has built as a curator at public museums, he continues to veer into various new territory, engaging in activities including the direction of the new ANB TOKYO art complex in Roppongi, collaboration on governmental or corporate projects, artist collectives, exhibition planning, etc. Exhibitions he curated include “Beyond the Naked Eye” (2011), the Yebisu International Festival for Art & Alternative Vision Vol. 4-7 (2012-2015; all of the above at Tokyo Photographic Art Museum), “Hallo World – For the Post-Human Age” (2018), and “Fujiko Nakaya: Resistance of Fog” (2018-19 at Art Tower Mito, Contemporary Art Gallery). He was also involved as a guest curator in the exhibitions “Sharing Footsteps” (2015 at Youngeun Museum of Contemporary Art, Korea) and “Eco Expanded City” (2016 at WRO Art Center, Poland) among others. Participated in the Agency For Cultural Affairs’ overseas training program for curatorsin 2015. Vice director of the Tokyo Photographic Research artist collective.