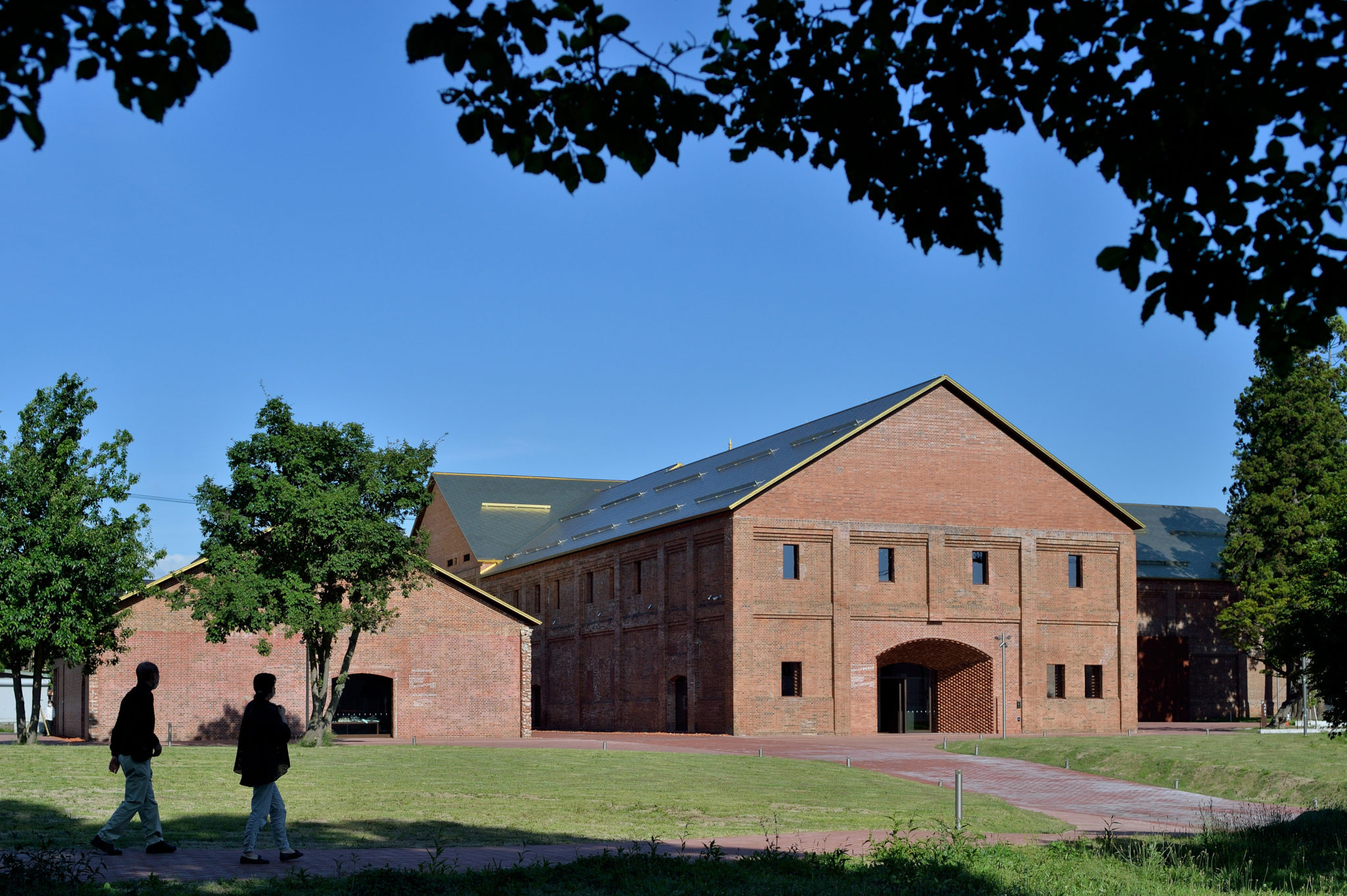 Since the end of 2019 up to this day, the world has been facing the threat of COVID-19. We are dealing with a type of coronavirus that is so novel and complicated that even experts are greatly divided in terms of characteristics and methods of treatment. We are still in a situation where we don’t have much clear information as to how to deal with it properly, making us aware of the menace that a virus we cannot see presents to us.

In Yoshino-cho, Hirosaki, a place where apple orchards used to be in the Meiji and Taisho eras, Tosuke Fukushima, a businessman who had been studying the then-revolutionary pure yeast brewing method, erected a brick warehouse that was to be used as a sake brewery. He opted for a brick construction because he thought that the building would be solid enough to be useful to later generations in case he didn’t succeed with his own business. The warehouse was equipped with a fermentation chamber and a brewing chamber. After the war, another entrepreneur named Isamu Yoshii brought the cidre brewing technique home from France, and established Asahi Cidre on the premises. After that, the business was taken over by Nikka Whisky, and the warehouse went on to serve as the distillery’s Hirosaki plant until 1965.

In 1988, civic activities calling for the use of the brick warehouse in Yoshino-cho for cultural purposes led to the foundation of a commission for the building’s reuse. In 1991, an exhibition of Japanese contemporary prints (featuring about 60 works by the likes of Masuo Ikeda, Tadanori Yokoo, Lee Ufan, Jasper Johns and Shiko Munakata) was held as a PR event in the city.

The city’s own plan was to re-establish the Yoshino-cho neighborhood as a “green belt,” but the officials weren’t able to achieve an agreement with the warehouse’s owner, as a result of which the plans for the brick warehouse were temporarily scrapped.

In 2002, Yoshitomo Nara visited the warehouse on the proposal of Chiyoko Yoshii, the president of Yoshii Shuzo Co., Ltd. at the time, and that visit inspired him to show his works in celebrated large-scale solo and group exhibitions at this venue in 2002, 2005 and 2006. Nara used the proceeds from these exhibitions for the creation of a sculpture of a white dog, to express his gratitude to the volunteer staff. He named his work “A to Z Memorial Dog” and donated it to Hirosaki City. The “dog” is today guarding the entrance of the Hirosaki Museum of Contemporary Art. The museum would probably not have opened without the president of Yoshii Shuzo, Chiyoko Yoshii, who initiated the three Yoshitomo Nara exhibitions in the first place. 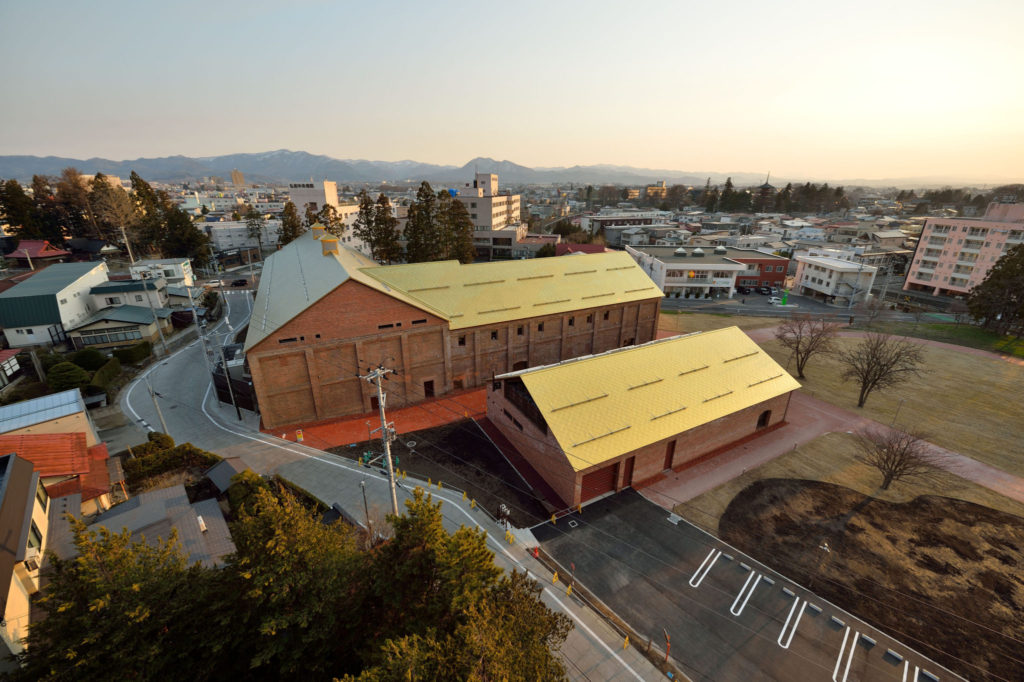 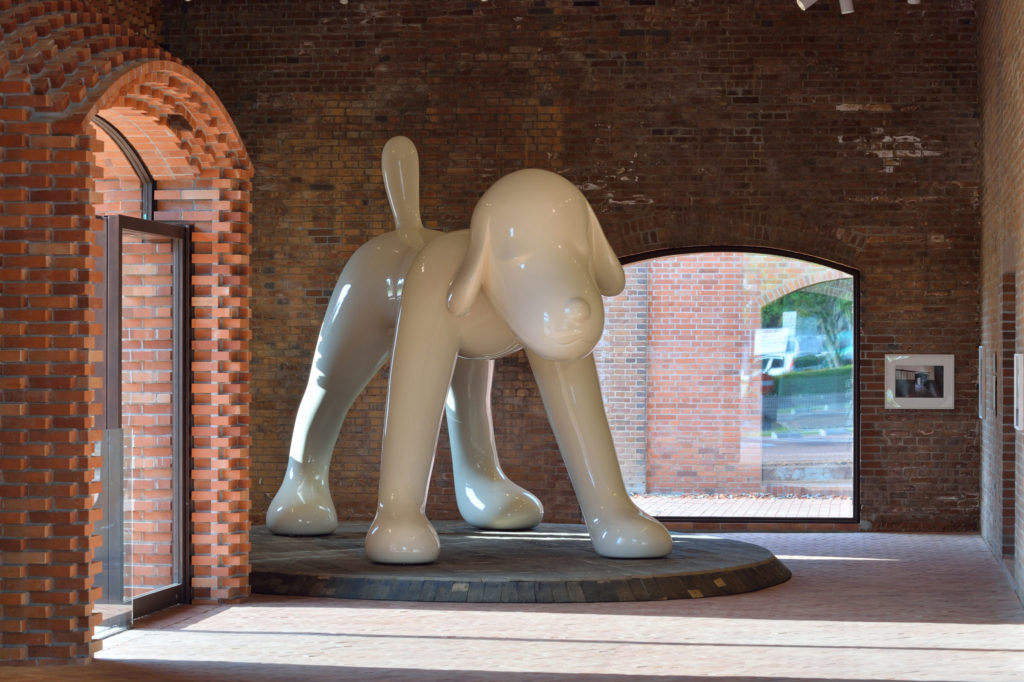 Based on the concepts of “succession of memory” and “creation of landscape,” the museum’s building was designed by Tsuyoshi Tane, an architect who won the international competition for the design of the Estonian National Museum. Proposing the idea of “perpetuating” – rather than newly constructing, extending or renovating – existing buildings, he connects the past to the future.

The museum’s main characteristic is defined by a combination of a “site-specific” approach to commissioning works in accordance with architectural and regional aspects, and a “time-specific” viewpoint implementing different rhythms and timeframes to exhibitions of different works, each of which make maximum use of the spatial possibilities the warehouse offers. The opening is commemorated with the exhibition “Thank You Memory – From Cidre to Contemporary Art” (until September 22). Due to the spread of COVID-19, the grand opening was postponed from April 11 to July 11. 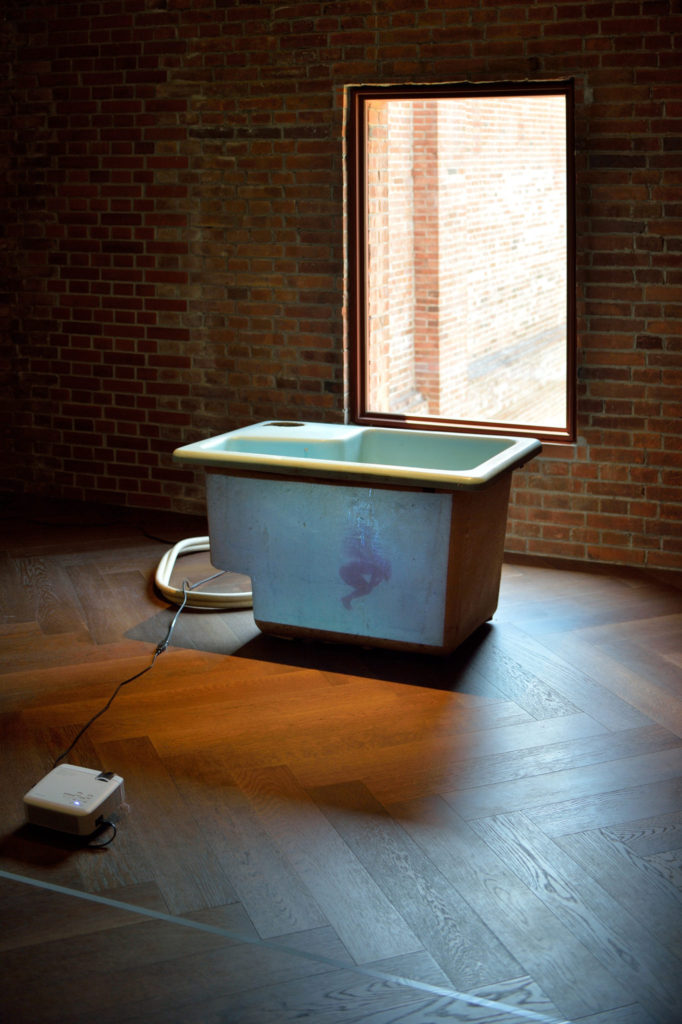 In addition to group exhibitions, one of the museum’s unique activities is the “Hirosaki Exchange” program. This is an experimental platform for various “exchange” between local and global, creator and viewer, in the form of talk sessions, lectures and other programs in which artists (partly related to Hirosaki) share the results on their investigations and research into the region’s tradition and history. The first participant is Ishu Han, an artist who moved to Hirosaki from Shanghai in his early childhood. His solo exhibition, titled “Where my art was born,” is being assembled over the period of several months during which the artist revisits his memories and feelings that connect him to Hirosaki.  The final results are scheduled to be unveiled in January 2021. 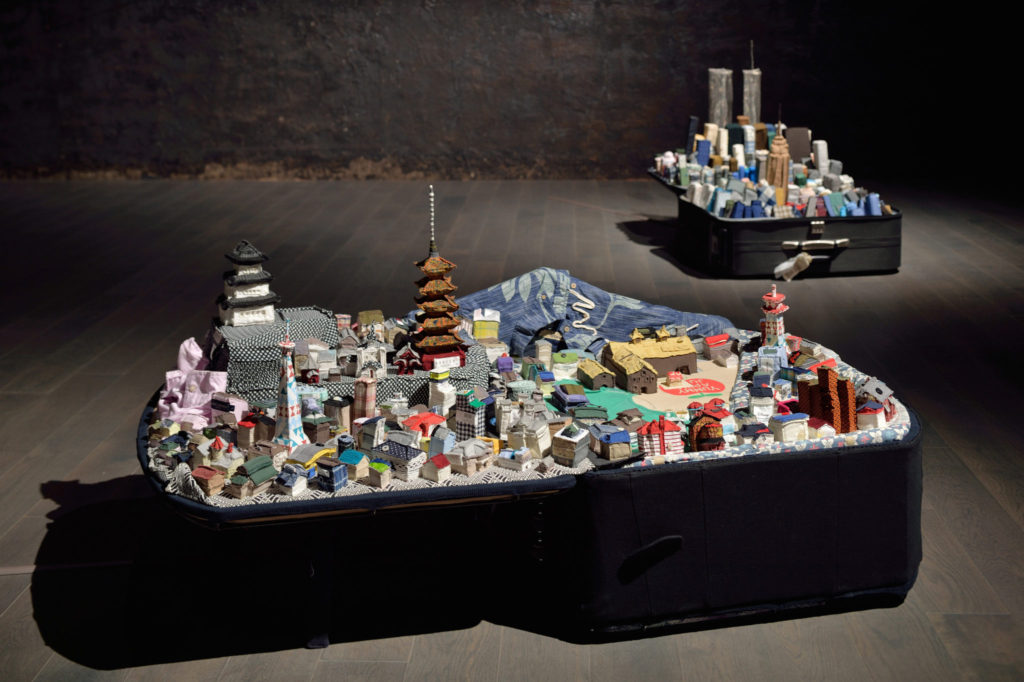 The diverse lineup of artists featured in the “Thank You Memory” exhibition further includes Yin Xiuzhen, Jean-Michel Othoniel, Aki Sasamoto, Naoya Hatakeyama, Hikaru Fujii, Yoshitomo Nara and Navin Rawanchaikul. Rather than exhibiting works at the museum that they have created in their respective own ateliers, each of the artists visited Hirosaki several times in order to create something based on their interaction with the region, its history and its people; something that ultimately manifests the characteristic properties of the warehouse itself. 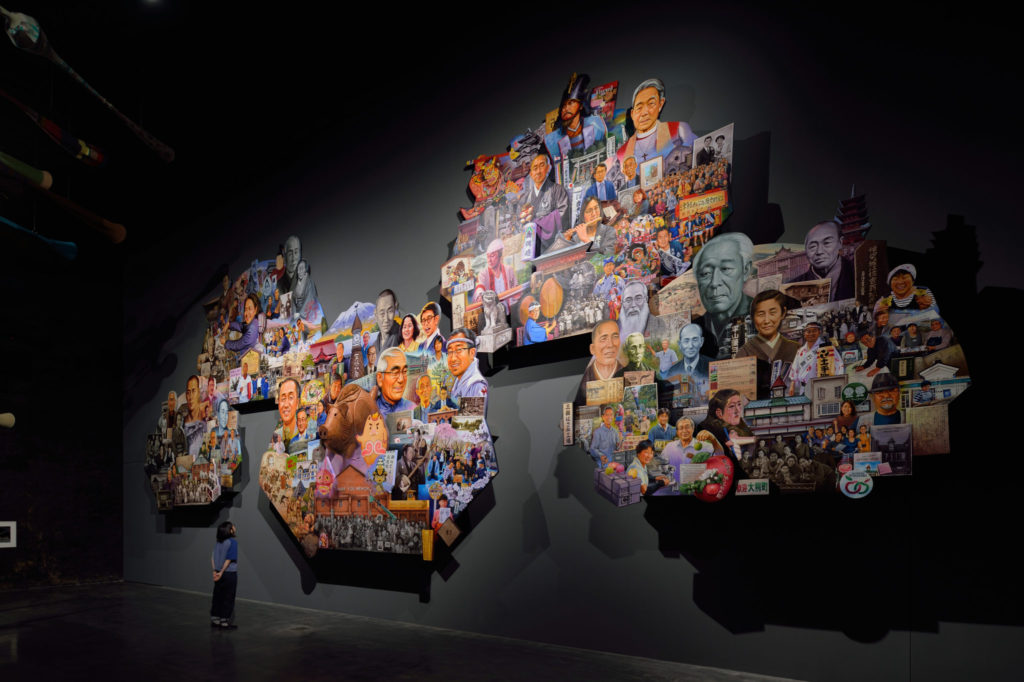 Rawanchaikul, for example, conducted interviews with over 30 citizens of Hirosaki. Based on these interviews, he created paintings and videos in which portraits are accumulated like road maps. Yin worked with one hundred old garments provided by citizens of Hirosaki, to build a series of “suitcase towns.” She used buttons to map the locations of various cities on one of the museum’s walls, and threads to connect them to points on another wall, making the museum’s walls look like giant pieces of clothing in a way. Hatakeyama and graphic designer Kazunari Hattori, who created the museum’s logo, together present a set of posters that illustrate aspects of the warehouse’s eventful history. Through the projection of memories of past moments into the present-day setting of the warehouse’s walls, the time of one place is split up into multiple layers.

The creation and exhibition of site-and time-specific artworks in a space that has its very own inherent history and memory, is certainly a unique and unusual approach. That style, however, is also somewhat dramatic and emotional. It undeniably draws from the exhibition space’s pre-installed notion of exciting the visitor, rather than relying on pure art and forceful works conveying modernist views.

Back when it was used as a rice wine distillery, and later as a facility for cidre brewing, the warehouse must have been filled with natural and artificial yeast that is used in the fermentation process, and it is exactly those fungi that represent the site – and time – specific qualities that are invisible to our eyes. In this respect, the very fact that the opening of this museum was delayed due to an invisible virus is again a rather curious reality.