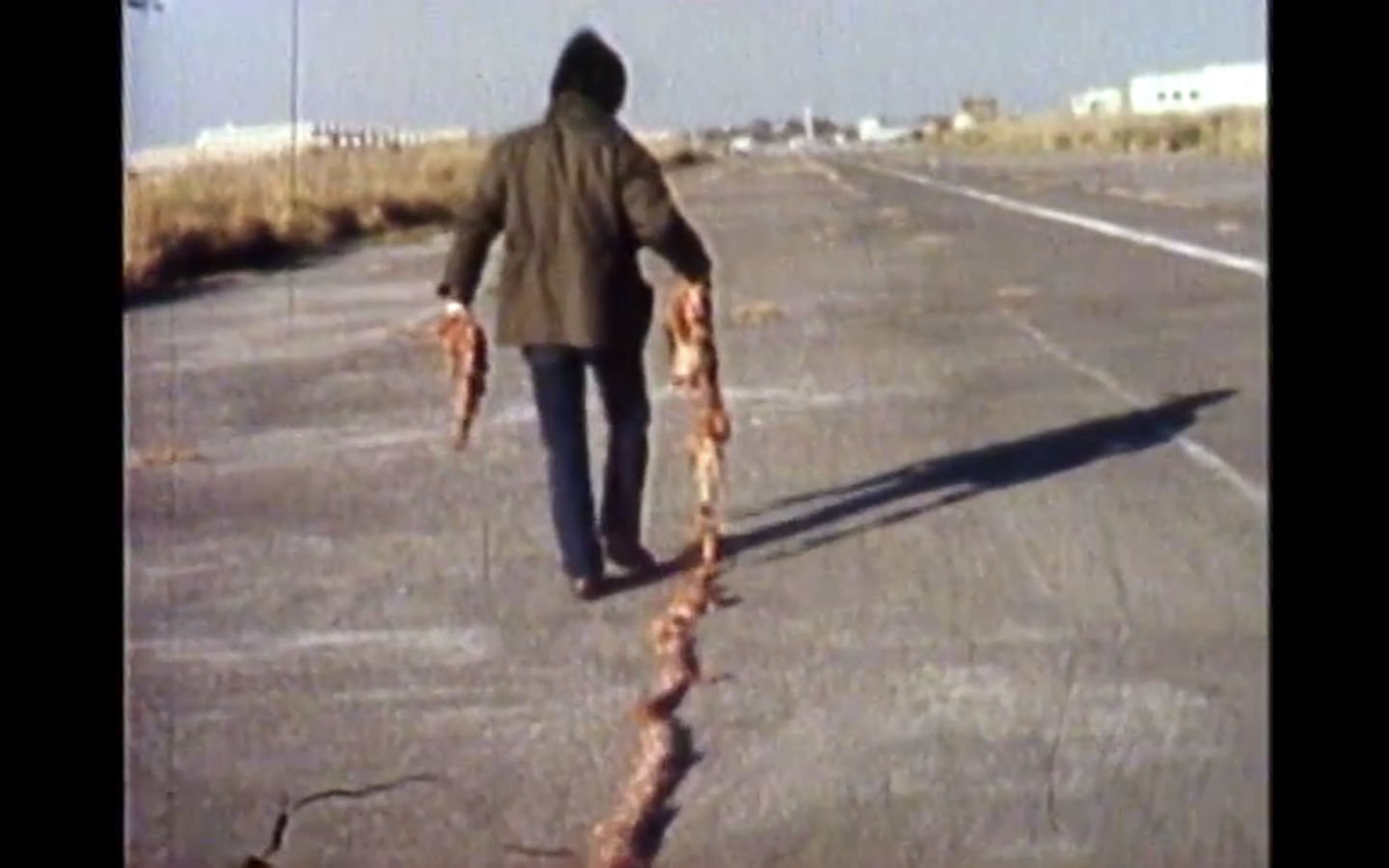 Space 23℃ is a small new art space with white walls that the widow of Koji Enokura set up in the garden of her home, located among houses and fields in a residential area in Todoroki. Shown here was My Hole: Scab of the 21st Century, a rather minimalistic exhibition featuring four works from the 1970s-90s by Hiroshi Fujii, an artist who has been active since the ‘70s. I didn’t know anything about him before seeing this exhibition. It was at this occasion that I learned about his rather shocking debut with a work juxtaposing raw meat and lumps of lead, exhibited at the Tamura Gallery that produced many a legend at the heyday of the Mono-ha movement in the 1970s, and his achievements as a contemporary of the likes of Koji Enokura and Noboru Takayama, exhibiting works at the “Space Totsuka 70” that one frequently comes across during historical research on major events related to Mono-ha.

On display were the installation Untitled (1969/2018), consisting of chunks of raw meat and cracked mirrors suspended on ropes from the indefinitely shaped space’s high ceiling; the painting Untitled (1990), which the artist cut out from painted thick plywood using something like a chainsaw; a monitor showing documentary video footage of the performance Meat, City, Street. (1972); and three photographs of Wave A that was shown in 1970 at Space Totsuka 70. 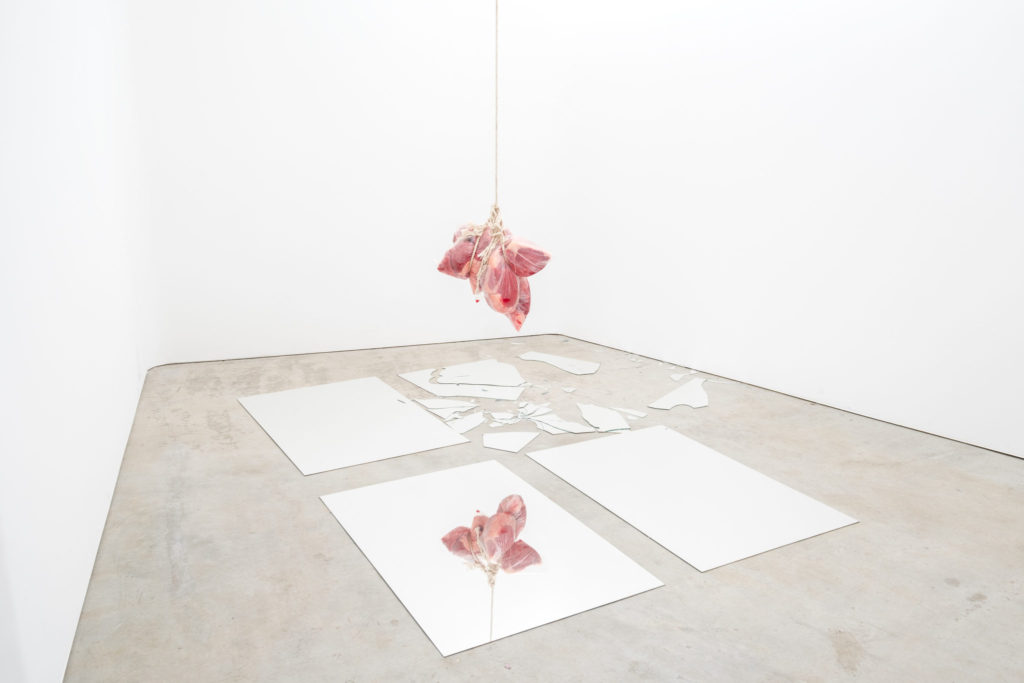 The showcase of this “forgotten Mono-ha artist” was curated by Akira Takaishi and Tomohito Ishii, two artists born in the 1980s. There was in fact a prologue to this event, when five artists including Takaishi and Ishii got together in the same garden in 2015, before the gallery was built there, for an exhibition titled My Hole, Holes in Art. By reexamining the meaning behind the “holes” in Haruki Murakami’s writings that illustrate the turning point of postwar Japan in the 1970s, and the meanings of the “holes” that many fine artists were digging around the same time, the artists featured here aimed to inspect their own “holes” in the reality of the 2010s. I knew about that exhibition from a catalogue that was published several years later, and from Takaishi’s text in that catalogue I learned about the above-mentioned Space Totsuka 70 that has been the central subject of the artists’ investigations, and about the results of those investigations that eventually inspired this recent exhibition.

Now I ask myself why Takaishi and Ishii chose Fujii as an artist whose work they wanted to reconsider. Along with general sympathy for the artist, from the curators’ own written introductions to this exhibition, and texts posted on the exhibition’s website, I sensed obvious doubts regarding the structure of the recent art scene, the re-evaluation of some of the “Mono-ha” artists, and the boiling market, in addition to the artists’ intention to reassess Fujii through their own work. Seeing the exhibition itself, and also browsing through the book Fujii Hiroshi Work, S 1970-1991 (published by Hiroshi Fujii in 2006), deepened my understanding of the essential parts in Fujii’s work that attracted them in the first place. In addition to contributions from key figures of the post-Mono-ha generation such as Shigeo Toya, Natsuyuki Nakanishi, Ryoichi Hirai and Naoyoshi Hikosaka, this hardcover book includes a very interesting essay by Fujii himself. What attracted my attention first and foremost, however, were a number of photographs documenting self-reflective performances staged in the ’70s, including unpublished works.

The way these black-and-white photographs capture the processes of these actions by the second is reminiscent of Bas Jan Ader, a Dutch artist who was active around the same time as Fujii at the American West Coast, where he went out searching for miracles in 1975 but never returned. Several decades after he had disappeared in the ocean, leaving behind black-and-white photographs that scrupulously document such actions as falling from a rooftop, Ader’s work received esteem again. The question is whether Fujii and Ader, who probably worked alone or together with a cameraman/photographer who recorded their respective actions at the time, were aware of the audiences that would see those works several decades later. Common aspects that I sensed in both artists’ works are the stoic attitude that they assume in their actions; their skepticism and resistance to the times, or even some sort of resignation; but also their display of intent by continuously recording their activities. I even feel their conviction that this spirit would be inherited by following generations. 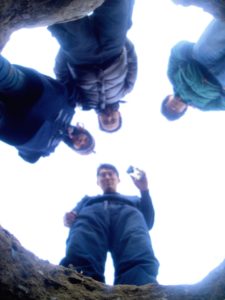 from the booklet My Hole, Holes in Art (published by Adachidelta, 2016)

Forty years later, Fujii’s work was eventually rediscovered by artists that are younger than his own children. While Ader is long gone, Fujii is there, right here and now. We can ask him directly about his thoughts on young artists and art, about why they dug that big square hole at Totsuka at the time, and about what exactly that hole meant for Hiroshi Fujii. Reevaluated not as a result of market or system developments, but rediscovered by a younger generation of artists, his work has retained its effectiveness as a means of resistance against society and art, from the 1970s up to today. In that sense, I’m glad that I had the opportunity to witness this exhibition, as it was an event that assured me of the potential of art in Japan.

Hiroshi Fujii My Hole: Scab of the 21st Century