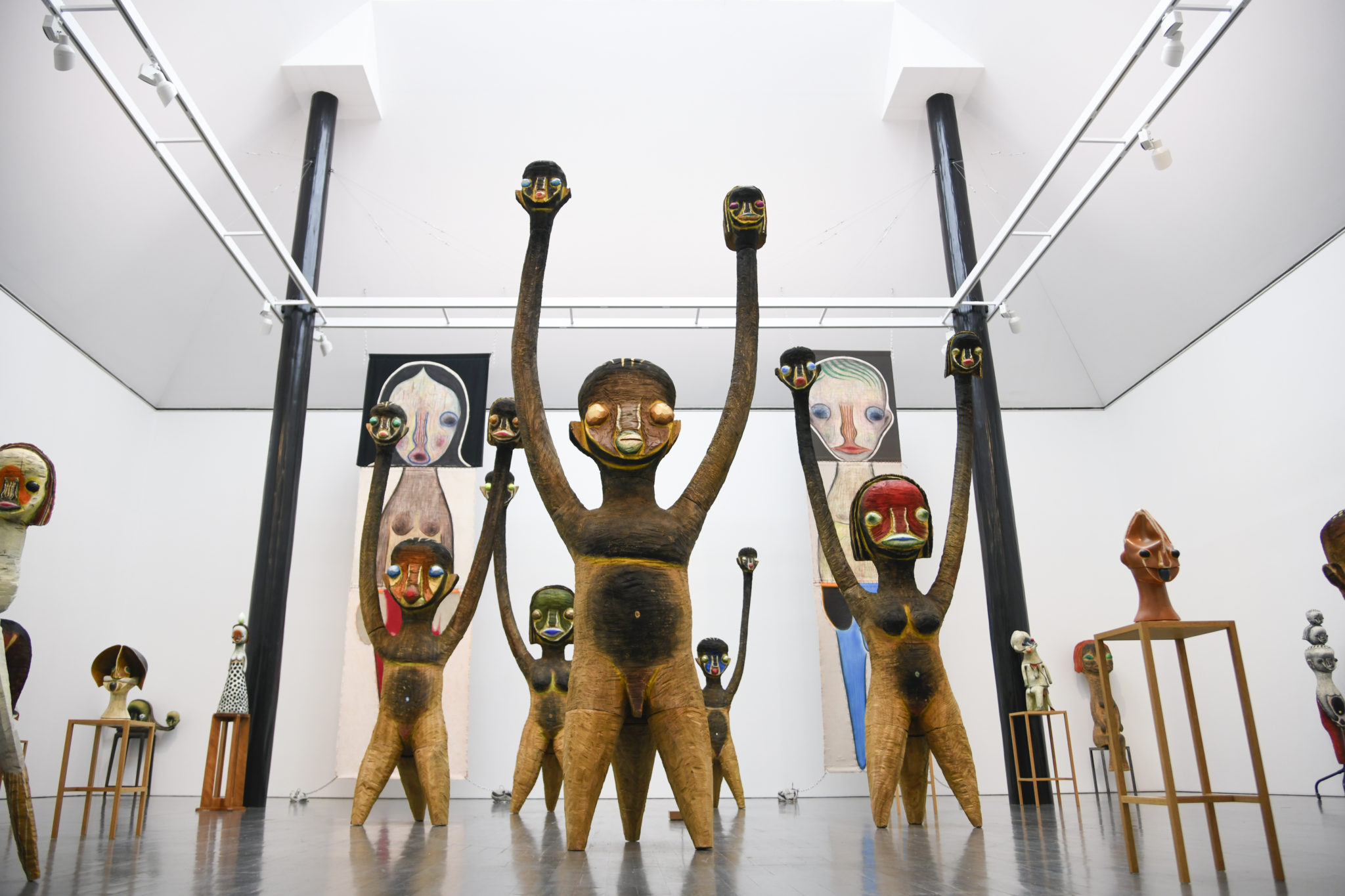 Since the rather shocking news one year ago that the Hara Museum of Contemporary Art in Shinagawa was going to close, people have been following every move of the museum more than ever. For about 40 years since its opening in 1979, the Hara Museum of Contemporary Art has been ambitiously showing exhibitions as a museum dedicated to contemporary art, and now the question on everyone’s lips is what they will present us with for their swansong. The straight answer to this question is being thrown at us “Like a Rolling Snowball” – the title of Izumi Kato’s exhibition that is currently showing at the museum.

The exhibition is concurrently showing also at the Hara Museum ARC in Gunma, and next to running for the exceptionally long period of approximately half a year, it is at once certainly also one of the largest solo exhibitions ever held at the Hara Museum. Regarding Izumi Kato, the exhibition definitely marks a turning point of sorts, offering a comprehensive overview of the artist’s activities that covers not only everything from Kato’s early work from the early 1990s to his latest creations, but also includes an outdoor live performance (on the Hara Museum ARC’s lawn) by THE TETORAPOTZ, a band of masked artists that Kato is a member of. 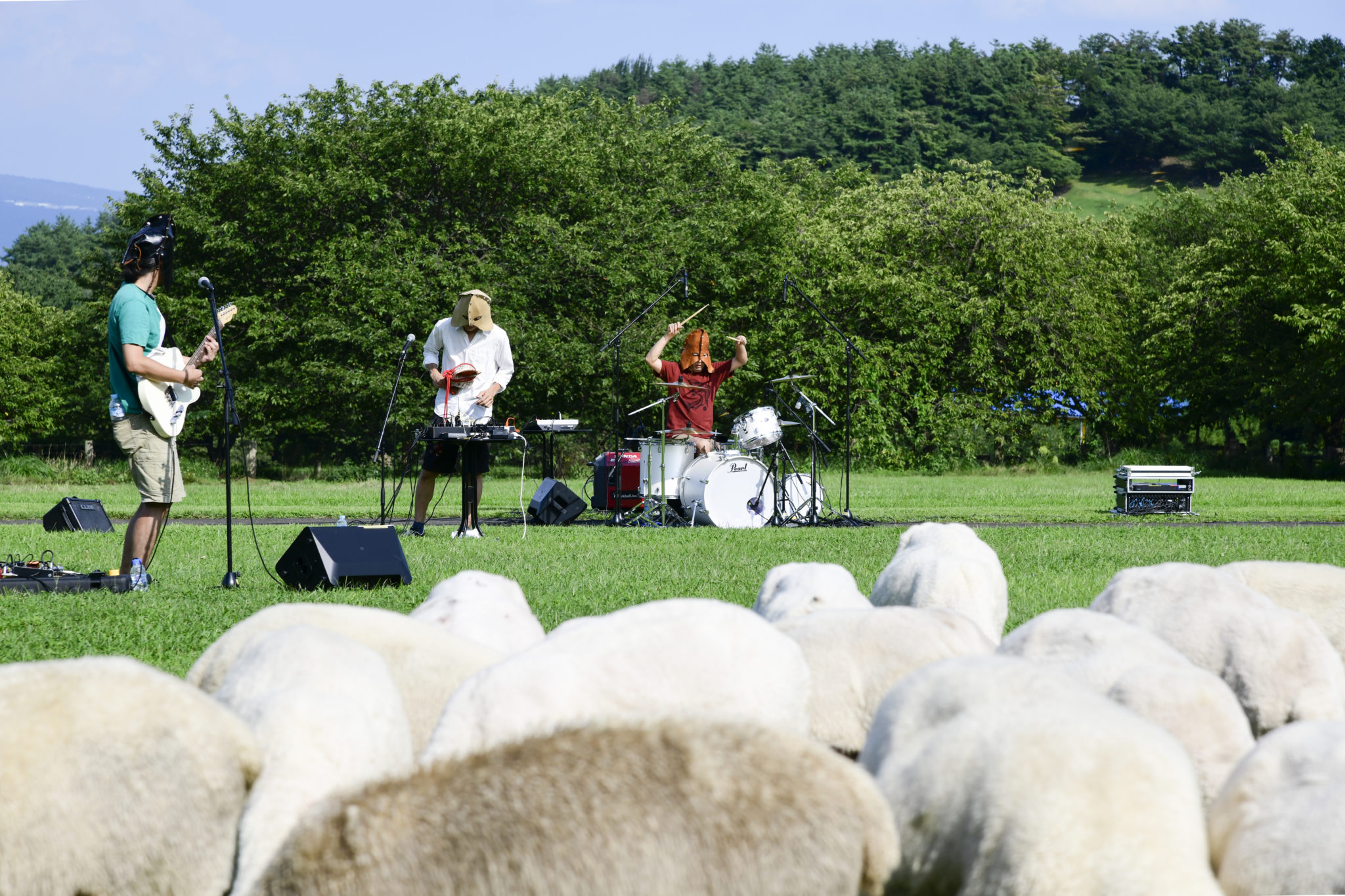 Shown at Hara Museum ARC are early paintings made in the early 1990s, and recent large wooden sculptures. The displays of 69 new items at the Hara Museum of Contemporary Art, on the other hand, are characterized by the rather unique setting of gallery spaces that form a semicircle around the Courtyard Garden. Making exhaustive use also of the garden as seen from the museum’s windows, the exhibition is a dynamic yet delicate showcase of the artist’s work.

While the works of Izumi Kato are often described as generally expressing primitive, undifferentiated organisms, the emphasis in the new works shown at this exhibition is on their characters as intellectual structures on a level quite different from that of raw power. The paintings and drawings appear like patchwork images composed of upper and lower body parts that were seemingly taken from different works. Other works, created by way of disassembly and reconstruction, such as human-like figures combining heads and torsos made from different materials, and suspended to look as if moving in different ways, seem to communicate the artist’s curiosity and somewhat natural history-inspired exploration of his own work, much rather than primitive energy. 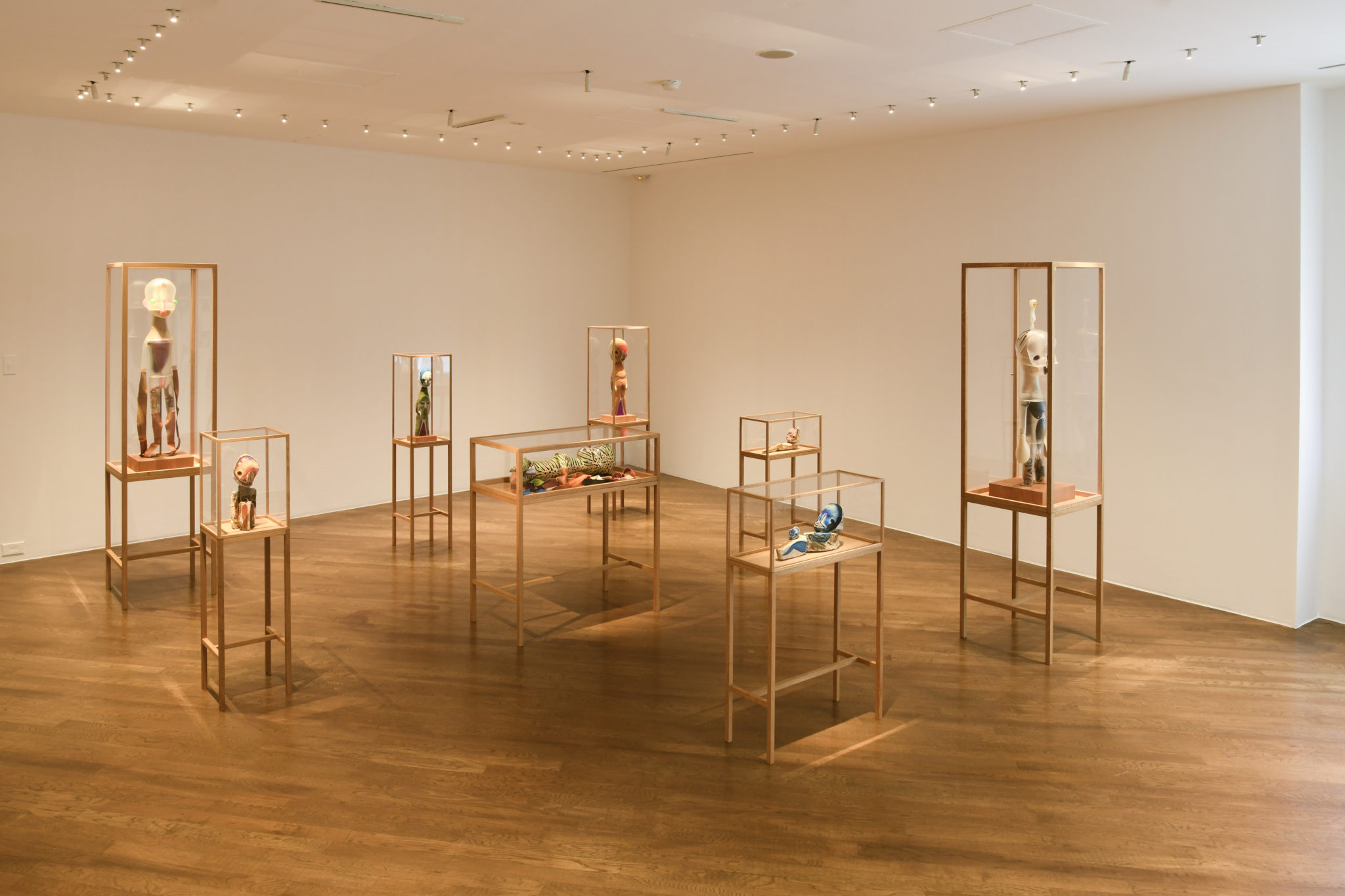 Worthy of special mention are particularly the sculptures displayed in specially made boxes in a room in the back of the Hara Museum’s second floor. Like specimen in display cases at an old museum, sculptures made in an assemblage style of cloth, rock, PVC, leather, and various other materials Kato has been working with, are presented standing upright or lying face-up. Even those who have thoroughly followed Izumi Kato’s career as it dynamically grew from Ikaho in Gunma to Shinagawa, must have felt as if stepping into another dimension when entering the last room of his solo show on the second floor of the museum in Shinagawa. The specimen-like displays harmonize with the museum building on a totally different level from the affinity between art and architecture that we have observed in the other exhibition rooms. Here we are inspired to let our imagination travel back to the first half of the 20th century, when the Hara Museum was built. 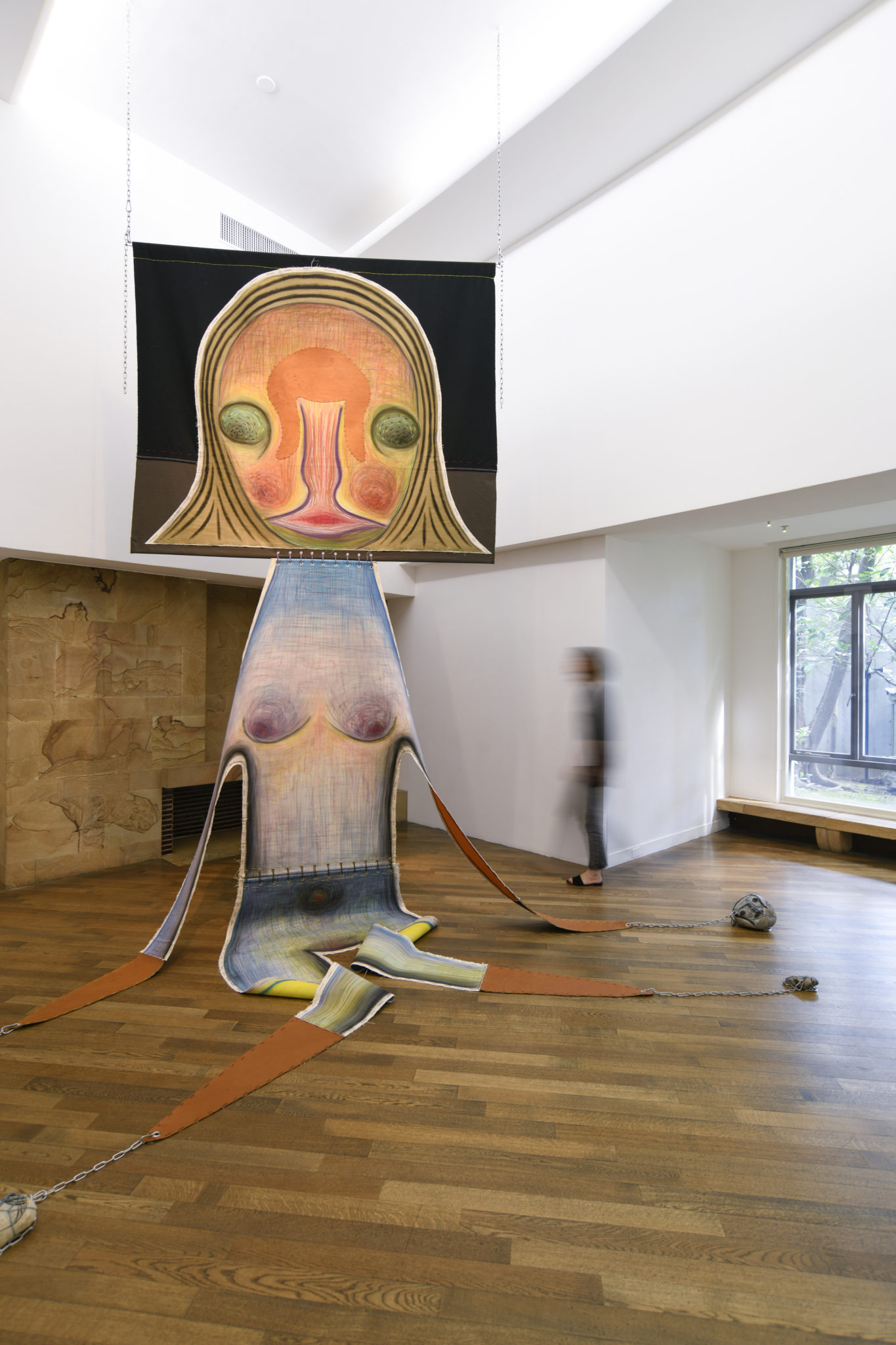 The Hara Museum of Contemporary Art is a Western-style building designed by Jin Watanabe in 1938. Watanabe was one of the leading Japanese architects at the time, who had designed the Tokyo National Museum in the previous year, and in 1938, also built the Dai-ichi Seimei building in Yurakucho among others. Within the body of work of Watanabe, who skillfully employed different styles in different projects, the Hara Museum is a rather rare example of modern architecture. One factor that is essential when thinking about the common denominator in modernism in architecture, and modernism in the history of art – and sculpture in particular – is certainly the search for new materials. Just like steel and concrete made it possible to play around with the shapes of architectural constructs, the introduction of materials like plastic, aluminum or other metals other than bronze, has significantly expanded the possibilities in post-20th century sculpture. In addition, such major changes in art history happened concurrently with the establishment of the institution of the art museum. 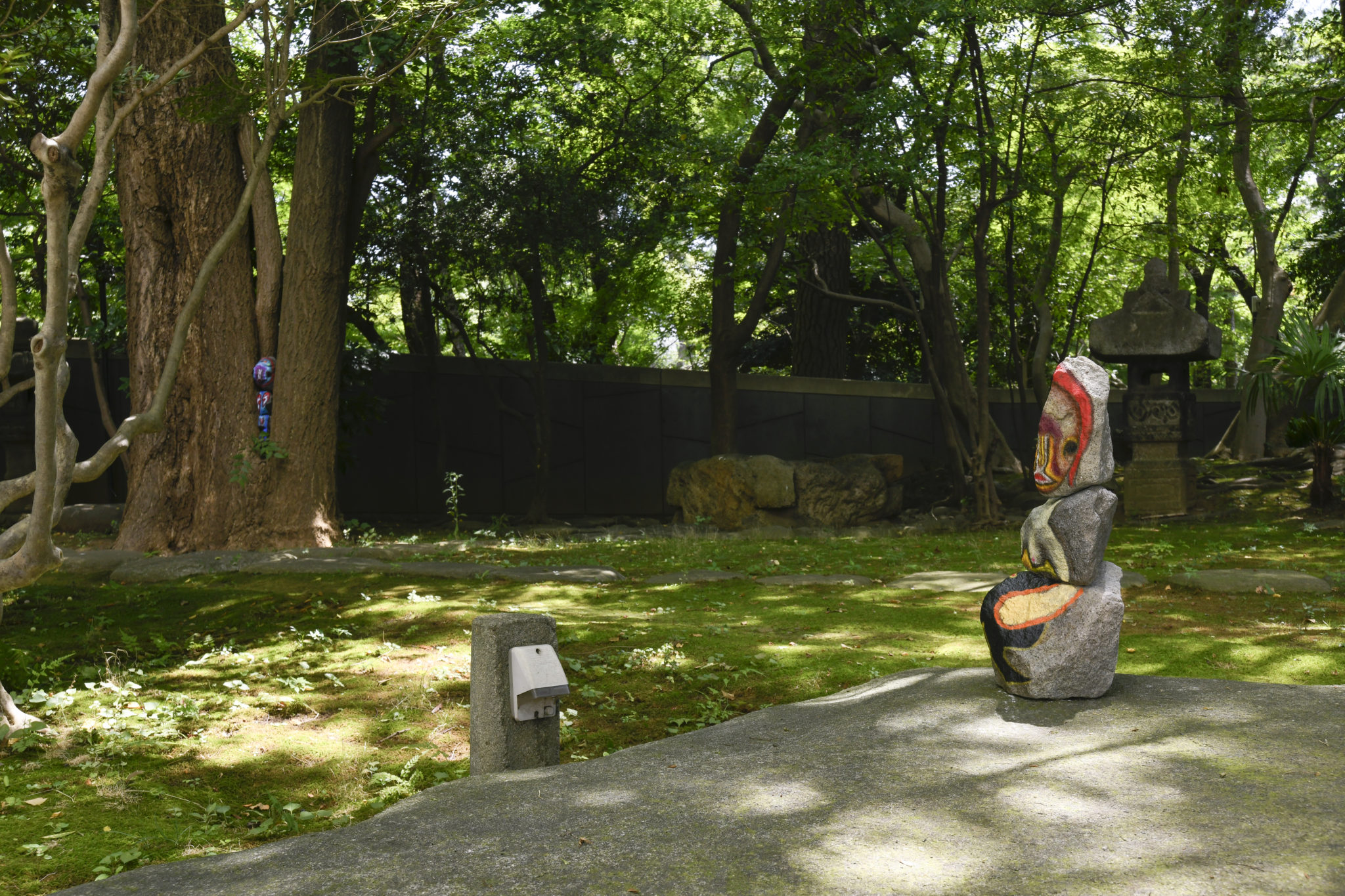 Displayed in the final exhibition space on the second floor of the Hara Museum of Contemporary Art, Kato’s new works seem to represent an experimental attempt to revive the history of modern sculpture from the viewpoint of material exploration, and at the same time, the early days of the museum exhibition as a new format. A quarter-century on from the 1990s, for Kato himself this exhibition was certainly also an opportunity to bring his own diverse artistic endeavors to a landing in the building of the Hara Museum. The fact that the works on display appear to be integral elements of the surrounding architecture here more than ever probably has to do with that parallel connection beyond space and time between the building’s history and Izumi Kato’s latest works.