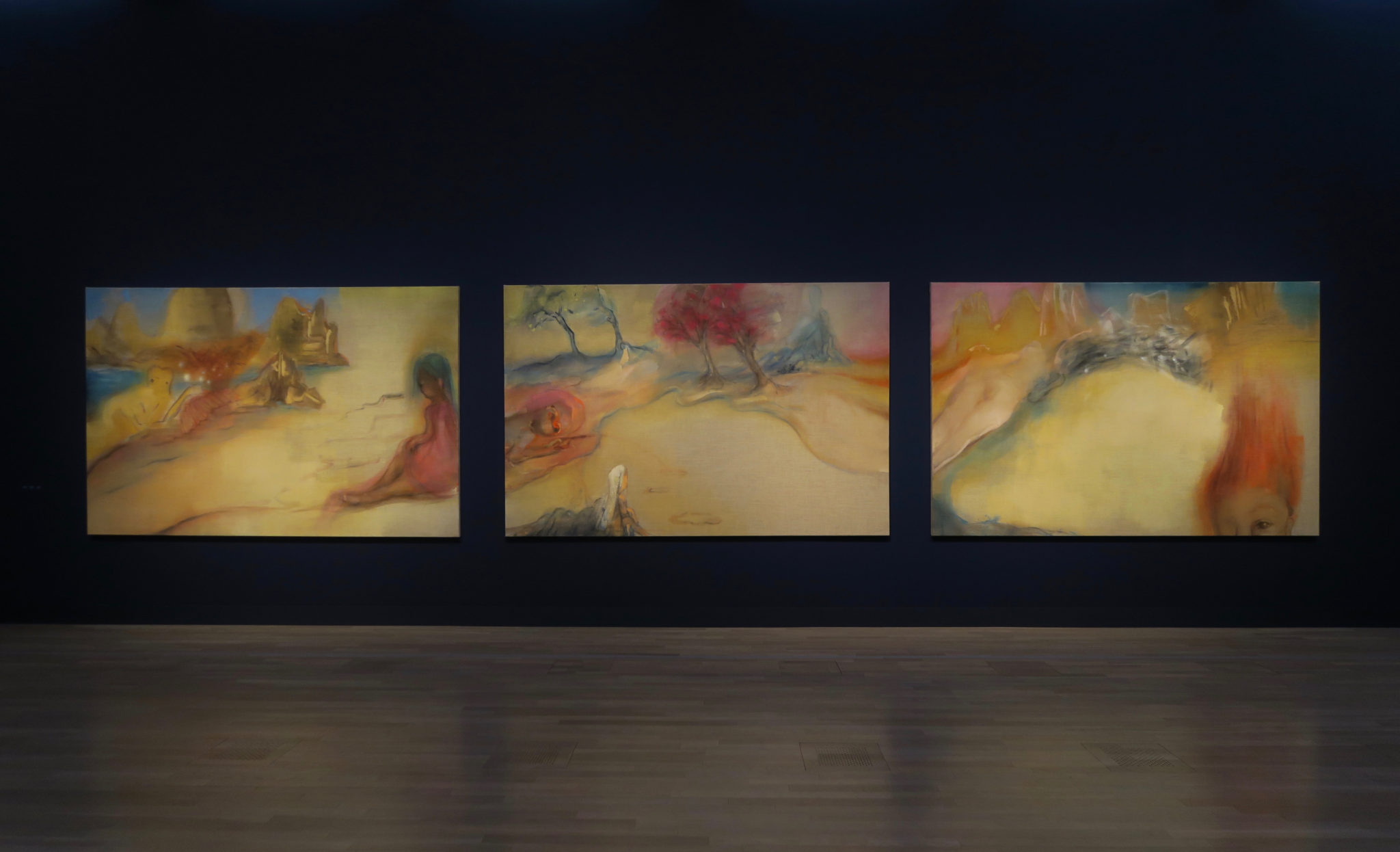 There is a notion of limitlessness. Everything looks blurry and unclear. Colors, shapes and human faces seem to melt into the background. They are aggregates of visual elements that seem to express weakness, smallness and softness, but in fact they display at once strength, grandeur, and a smell of violence. Like a cute and fluffy looking rabbit has solid teeth and meat that tastes good, and metabolically super-active cells when observed through a microscope, Leiko Ikemura continues to explore her own “scenic mountain path” to see “what the world as she knows it is really like” – a quest that considerate philosophers, artists and science fiction writers have been pursuing since ages. 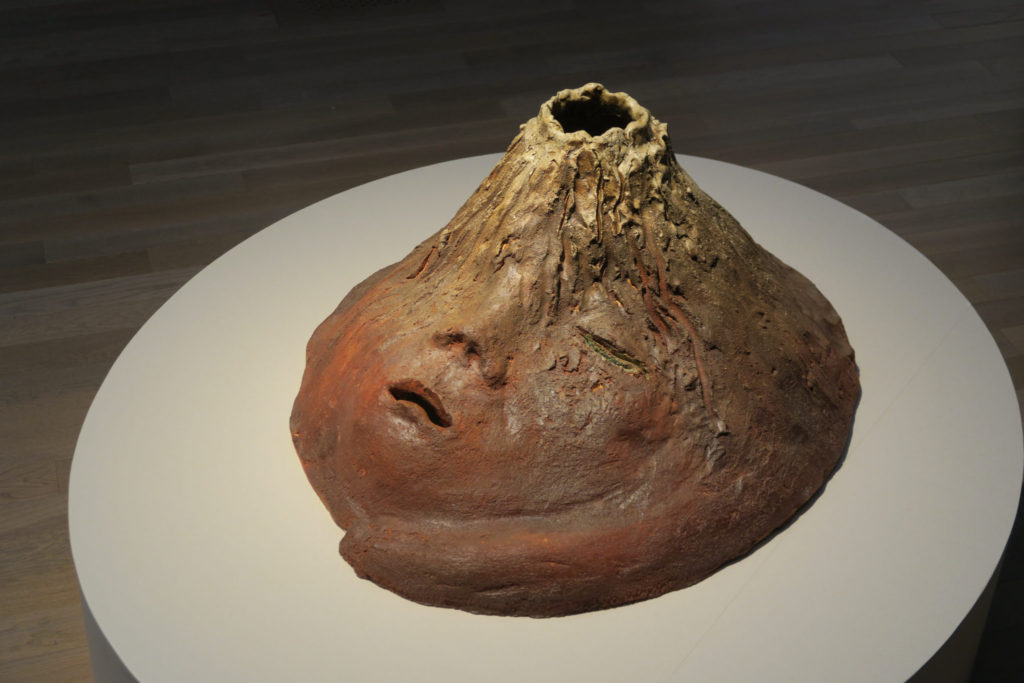 I use the metaphor of “mountains” because I was highly impressed by the artist’s comment in her autobiography Doko ni mo zokusabai watashi (I belong to nowhere), explaining how she holed up in a cottage in the Swiss mountains and spent about a year devoting herself to creative work.

“At such secluded places, artificial cultures, human activities, and anthropocentric thinking in general don’t apply and therefore loose specific weight. It was an experience as if concepts of time, and manmade boundaries dividing nations, genders and ages got blurred, and separations fell apart. […] A sensation like shaking off pieces of equipment one by one, so that everything is gradually purified.”

This sensation is reminiscent of the feeling in moments we have climbed a mountain and stand at the top, and realize how tiny a creature man is. In a way, Ikemura promotes such stereotype kind of intuition. When a human being stands all alone in a forest in the mountains, for example, what remains there of the world that we are supposed to perceive through our five senses? As described by Mahler in his first symphony, by Messiaenin ”Des canyons aux étoiles,” and by Santoka Taneda in the poem”I go in I go in still blue mountains,” the motive is to present in the form of artworks the essential “core of nature” – a territory that is otherwise not accessible to humans – for us to be grasped through the given tools that are our eyes, ears and language. 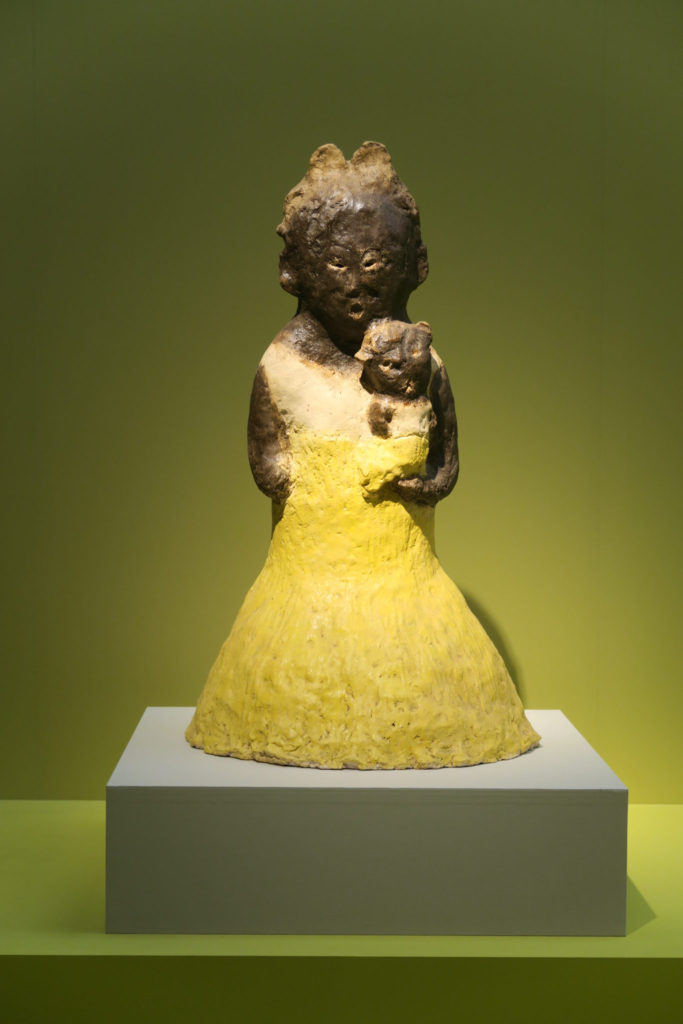 To me, the “limitlessness” in Ikemura’s works seems to be a means for translating her perception of the world. While the idea to “depict things as they are and as they appear” is many an artist’s motivation (referring to Paul Klee’s wise words “The role of art is not to reproduce visible objects, but to make invisibles visible”), Ikemura’s “things as they are” may be described as a formula that expresses the coexistence of confidence in her body’s senses when facing nature (not in brief moments, but within the space-time of daily life), and distrust of the (sensing) human being in the form of Ikemura herself as the perceiving subject.

Elements that are painted in “limitless” ways in such works as “Zarathustra III,” “Tokaido” and “Genesis” are simple and few in number. Nonetheless, what appeals to the viewer is that “sound wave” of sorts that is emitted by the colors, that indescribably cloudy mix of ocher, gray, black and light blue. Standing in front of these works, many people sense in things like the skull “Tokaido” the future of every human being – to die and return to dust. But at the same time, at the other end of the spectrum there are also notions of “life.” The indifferent expression of “life” in Ikemura’s paintings is not at all a “good to be alive” kind of hymn to human life, and it comes across neither vulgar nor sublime, but it is definitely “painted” there even though not manifested in any concrete shape. 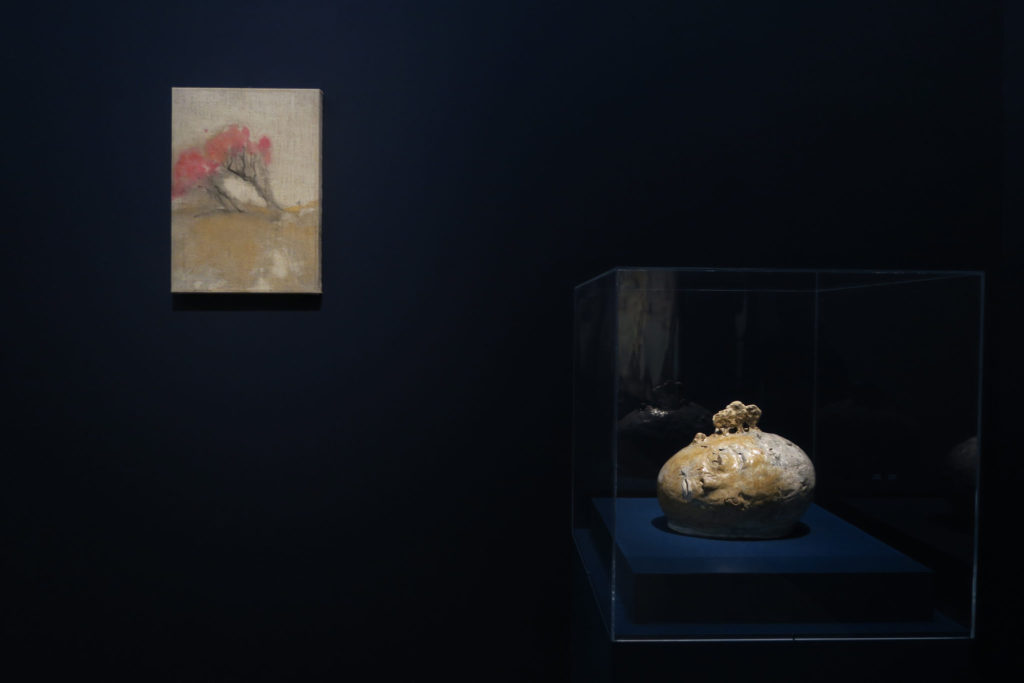 In his autobiographical novel Confessions of a Mask, Yukio Mishima writes that he remembers the moment of his birth. Reading his description of water and light in the basin of his first bath, one finds no words to qualify this author’s tremendous powers of expression, but unfortunately, for us who have accumulated expressions and experiences, a ”brand new encounter with the world” is no longer possible.

Leiko Ikemura is a multilingual who is fluent in Japanese, Spanish, German and English, all of which she has picked up while traveling across Europe. To move from one place to another is something she describes as “getting in direct contact with the world while language is temporarily switched off,” and she has in fact experienced such verbal ”reincarnation” several times. The intensity of images in Ikemura’s works is certainly rooted in the process of her understanding of language, realizingthat the German “Schwarzwald” is awordthat represents a forestthat is quite different from the Japanese idea of a forest.

In the ”Utsubuse no shojo (Girls lying face down)” series that Ikemura is primarily known for, “Lion Red” is particularly impressive. Charged at once with red hot energy and glowing desire, anxiety of living and a tremendous urge to create, the girl with her slightly raised upper body and a lower body that melts into red was like a token of Ikemura herselfwhen she was a little girl!