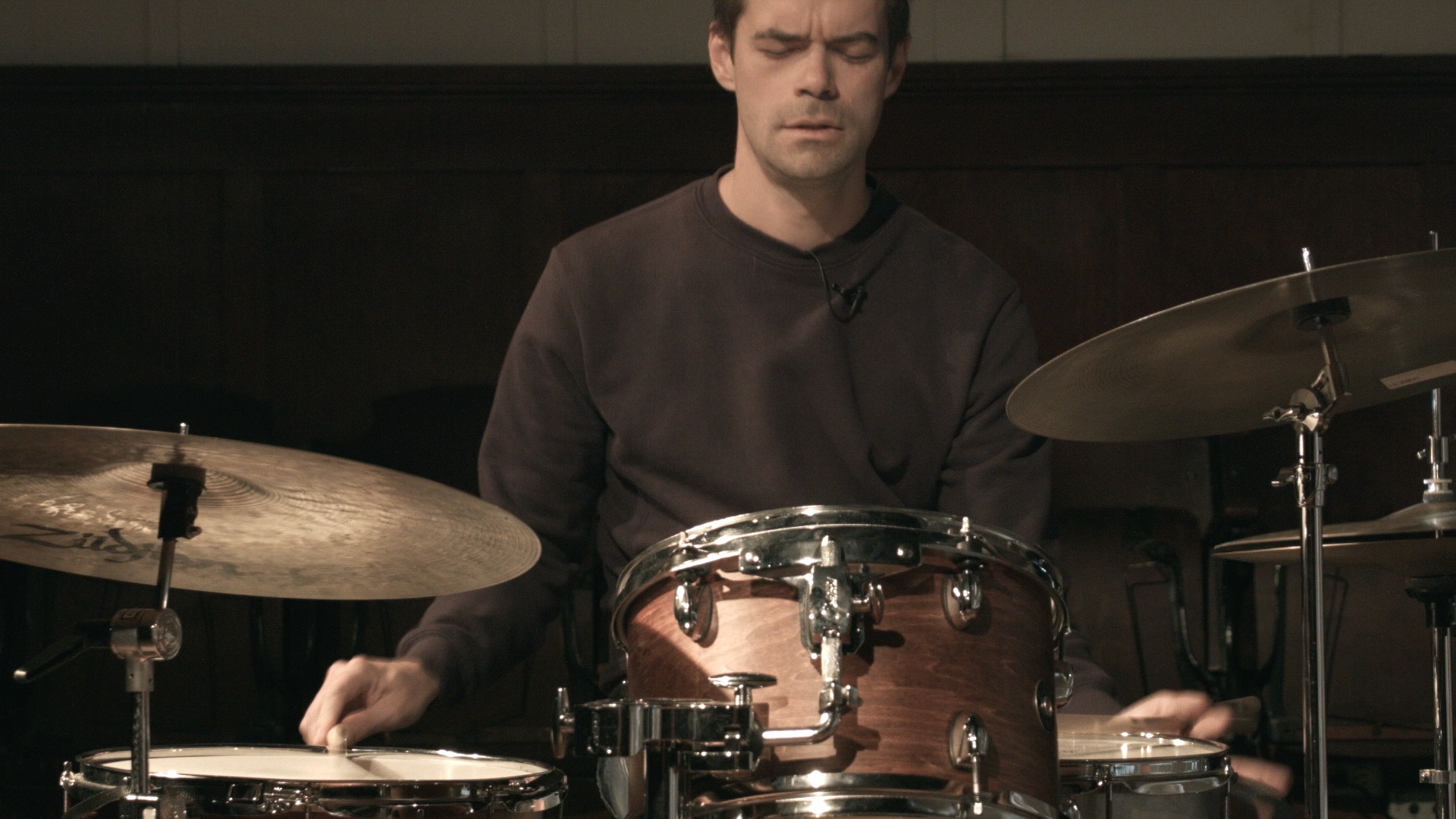 Between “hearing” and “touching”

This is the first thing that Maiko Jinushi requests in her latest work, “Sound of Desires,” a 69-minute-long video of a live performance at the LIVE International Performance Art Biennale in Vancouver, Canada, in 2017. The video is projected onto three screens on one wall of the gallery, each showing footage shot from a different angle/distance. On the screen on the right one can see Jinushi as she films her conversation with drummer John Brennan, with her camera mounted on a tripod. The screen in the center shows the drummer, captured from the front by Jinushi’s camera, while close-up views of the drums and the drummer’s hands are projected onto the screen on the left. 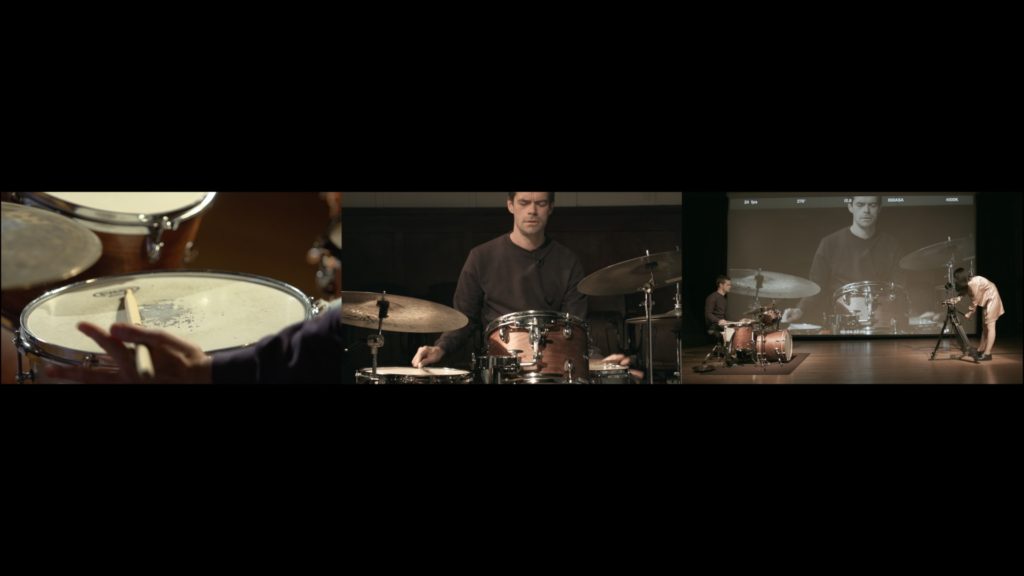 As requested, the drummer improvises a performance of what sounds like waves of desires that emerge, swell up and roll, before eventually disappearing again. Following this performance are four more requests from Jinushi, to each of which the musician responds by playing the drums.
Asked what he thinks about the trend of Japanese people in their thirties (the age group that both Brennan and Jinushi belong to as well) having no sexual experience, Brennan assumes that it has something to do with technology, and be a matter of disconnecting from physical contact, losing contact with human physical touch in general.
The conversation leaps to the next topic, “self-made mummies,” and Brennan suggests that everything probably melts away when one focuses one’s attention on one thing, and that this creates a sense of connection with something other than oneself, resulting in a sense of peace. The third subject is “a contradiction between desires and ethics,” as people experience it for example when falling in love even though they have a partner. The final topic is “places where unaccomplished desires go.”

Brennan refers to a wild kind of place in his brain where “there’s a crew of desires hanging out,” and explains how he enjoys conversations while sometimes being able, and sometimes being unable to control these desires. It’s always a question of whether one throws oneself into a situation that one cannot deal with in rational terms, or tries to settle things. Remembering the issue of the sexless Japanese people, I thought that it’s perhaps a kind of skill that one can never master if one avoids friction, and runs away from love from the beginning.

What I found particularly moving was a scene in which Brennan performs a ”requiem for unaccomplished desires.” Jinushi begins to reveal her personal feelings, talking about her unaccomplished desires, and how it is sometimes hard for her to deal with them, which seems to loosen up the tension between the interviewer and the interviewee. Responding to Jinushi’s request to play a tune – preferably a happy one – Brennan plays the drums again, and Jinushi silently begins to move her body and dance. The dance was apparently planned, but it seemed to me that there was certain communication going on between the two, some kind of mutual appreciation and celebration of life that doesn’t always go as we want. 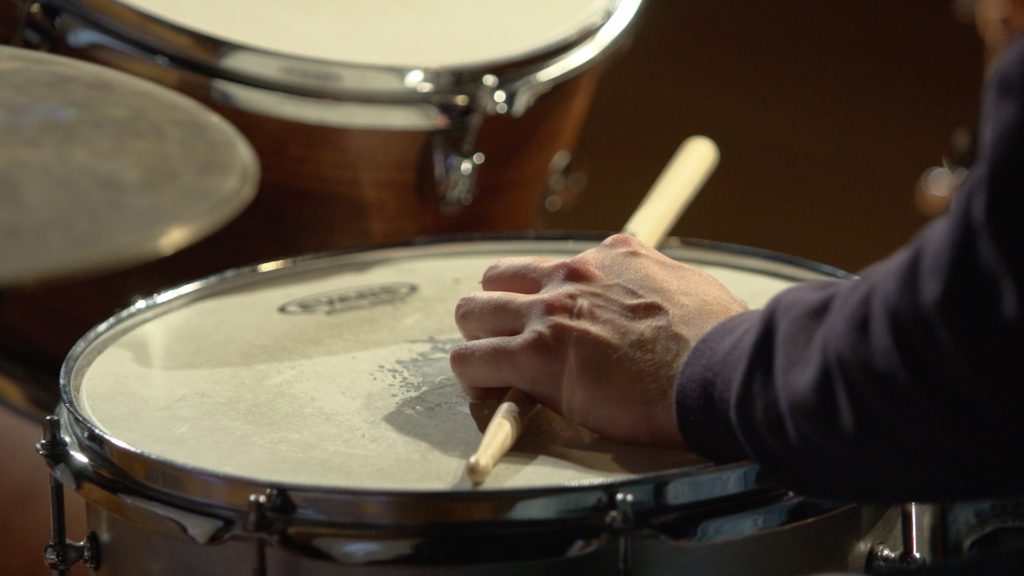 The drums and drumsticks symbolically show how the physical contact between humans and objects produces sounds. Desires are translated into music, which we perceive as vibration. The two artists, however, remain on their respective sides of the camera, and engage in their conversation and expression through sound without direct contact throughout the entire piece. Rather than the contents of their dialogue, it is the very act of listening carefully and understanding each other that illuminates the path of reflecting and releasing one’s own desires. Watching the whole thing from the outside, I felt somewhat refreshed, which was certainly an effect of witnessing that process of listening to each other just as if touching each other.

When watching the video once again, however, I noticed how at the end of the session of intense rhythm and dance, Brennan seems to be sunken in his own world with his eyes closed, while Jinushi stops dancing and continues to film the scene like a dispassionate observer. What looked to me like communication between the artists turns out to be my own wish and fantasy, which probably kept me from noticing the gap that emerged between them instead. Such is the discrepancy that desire is all about, and that’s probably what makes it such a joyful practice of asceticism.

Art writer. Was an editor in charge of art for the cultural information magazine WEEKLY PIA from 1991 until ’97. Presently writes for publications such as SPUR and colocal. Has been conducting interviews with artists including Takehito Koganezawa and Taro Izumi, and contributing articles on such projects as the Echigo-Tsumari Art Triennale. Also writes movie reviews, and is involved as a team member in “Meguriai JAXA,” a screening event of archival satellite observation images of the Japan Aerospace Exploration Agency (JAXA) edited into non-staged movies.