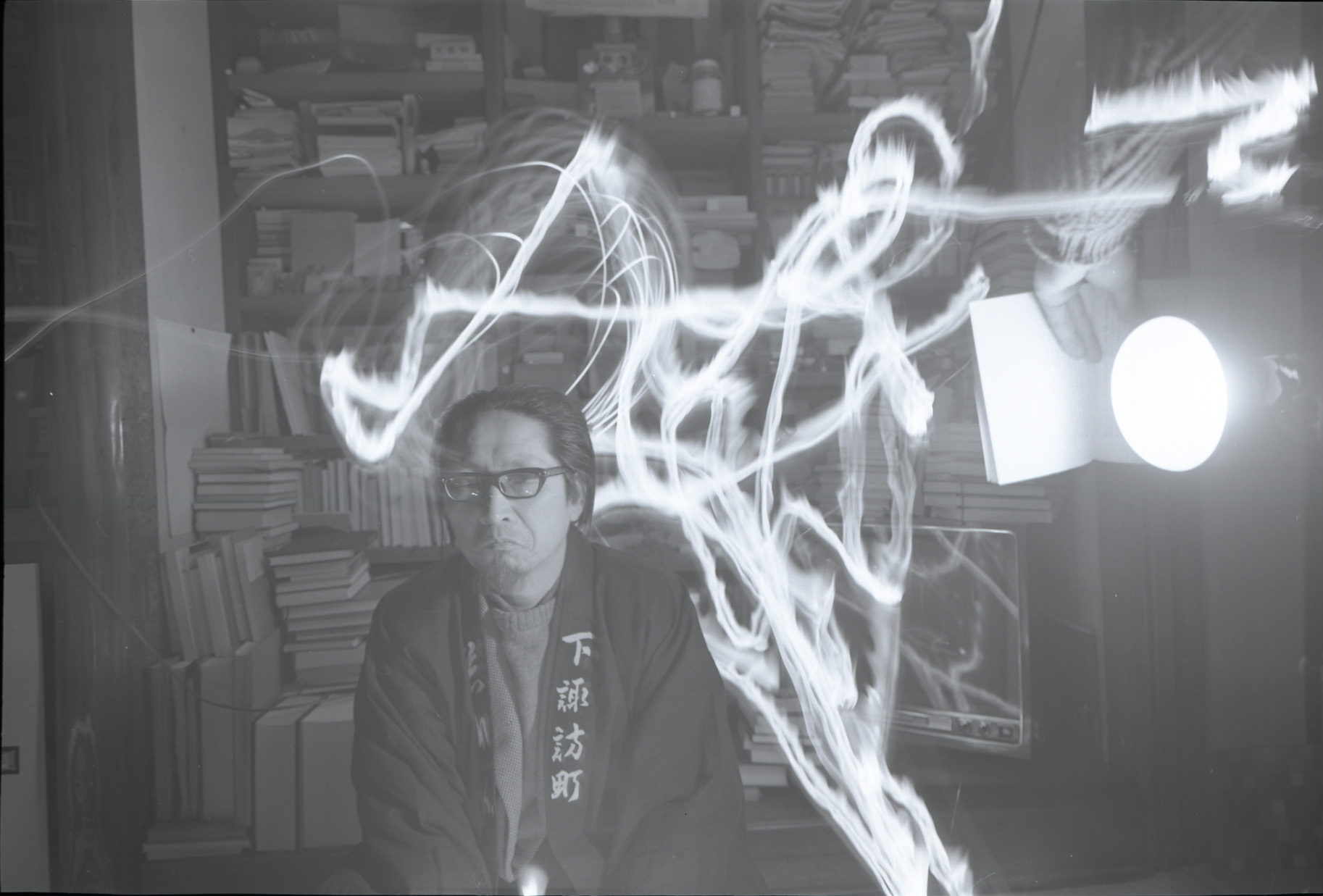 The “Matsuzawa Yutaka: The 100th Anniversary of Birth” exhibition opened at an art museum in Nagano on February 2, 2022—exactly 100 years after Yutaka Matsuzawa’s birth on February 2, 1922 in Shimosuwa, a town in the same prefecture. Matsuzawa, who spent most of his life on the shores of Lake Suwa, felt a special connection with the number 2, which is shaped like a swan floating on a lake. It was his birthplace that inspired themes such as swans, lakes (water), and numbers (mathematics) that make frequent appearances in his “anti-civilization” works, which serve as a rejection of anthropocentrism.

Placing Matsuzawa in the history of art is a difficult endeavor. Saying that he was a pioneer of Japanese conceptual art, or that he was ahead of Western conceptual artists, or that he aimed at dematerialization through the use of words ultimately fails to capture this artist’s versatility. Matsuzawa’s oeuvre draws on his diverse interests, including astrophysics, mathematics, Buddhist thought, and spirituality, but that does not make it esoteric. For example, anyone will understand the words “Humans, Let’s Vanish, Let’s Go, Let’s Go, Gate, Gate, Anti-Civilization Committee,” written on pink banners and paper in his best-known work. 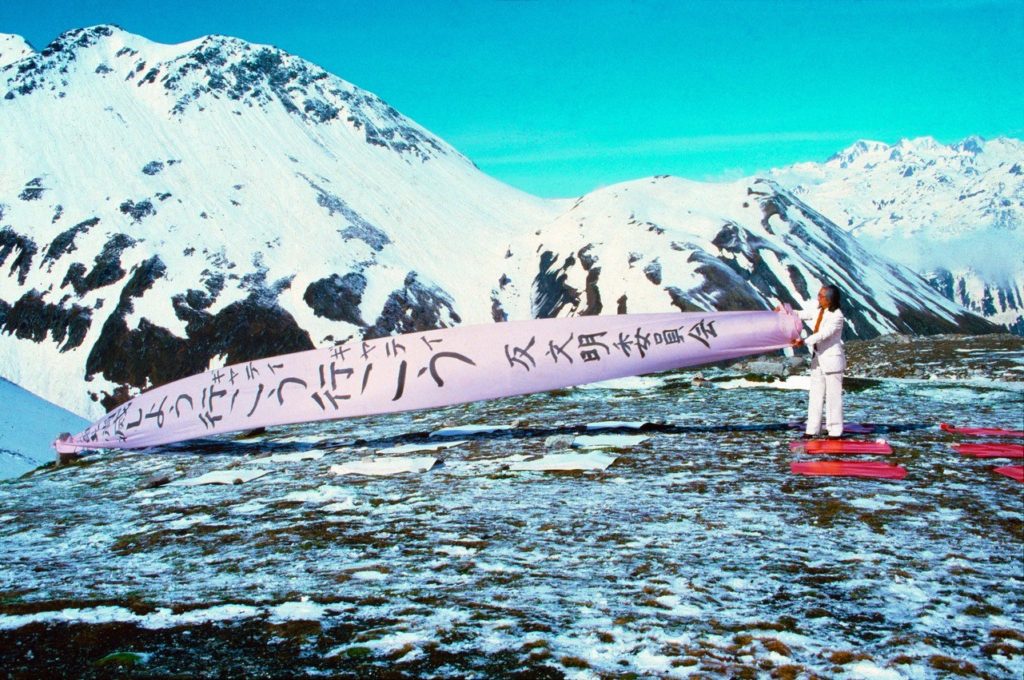 But it is unclear whether those words are a call for humanity to keep going as it is because it’s destined to perish, or a warning to break free from material civilization before it brings about our doom. Rather than the message being open to the viewer’s interpretation, it appears that both sides are true at the same time, because the future from this point forward is imbued with both possibilities. Matsuzawa’s words, which resemble a call to action, transcend rational judgment in the sense of being or not being understandable in a specific way. In this sense, it’s instrumental to consider how different his work is from that of Western analytical conceptual artists such as Joseph Kosuth, who argues that “art is the definition of art.” While Western conceptual art carries a strong connotation of institutional criticism directed toward art itself, Matsuzawa’s perspective is far broader, reaching out toward the wider world and the universe.

This exhibition featured not only works by words and recordings of performances by Matsuzawa, but also a vast collection of never-before-seen paintings, drawings, architectural plans from his student years, materials for public sculptures, and the artist’s own editions of poetry books. One well-known anecdote tells of how late at night on June 1, 1964, Matsuzawa suddenly heard a voice commanding him to “Vanish objects,” which inspired him to cast off the chains of the material world and create artworks solely from text. However, he is known to have pursued expression beyond material, form and meaning in his earlier activities, such as in the case of architecture, saying that he wanted to “create architecture of the soul, architecture that cannot be seen,” as well as in poetry, where he moved toward a form of expression composed entirely of symbols. Additionally, it is also clear that Matsuzawa did not in fact get rid of everything material after having his famous revelation, instead hiding his material artworks in the attic of his home, which he called the “Psi Room.” 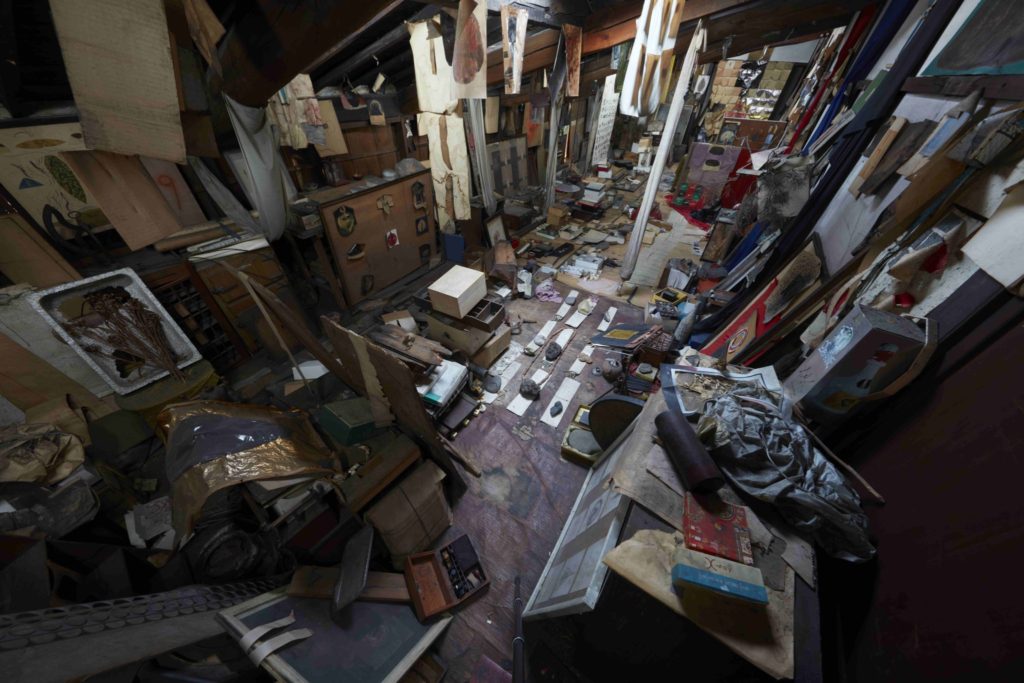 The exhibition features a partial reconstruction of this room at the very end, with its innumerable objects giving away Matsuzawa’s fetishism. His work springs from the space between the two extremes of transparent “concepts” (kannen) that consist purely of words, and the lust for the material that fills the Psi Room. Nevertheless, the essence of that desire is not associated with material civilization, being instead directed toward the raw sensuality of objects shaped and colored like female breasts and uteri. 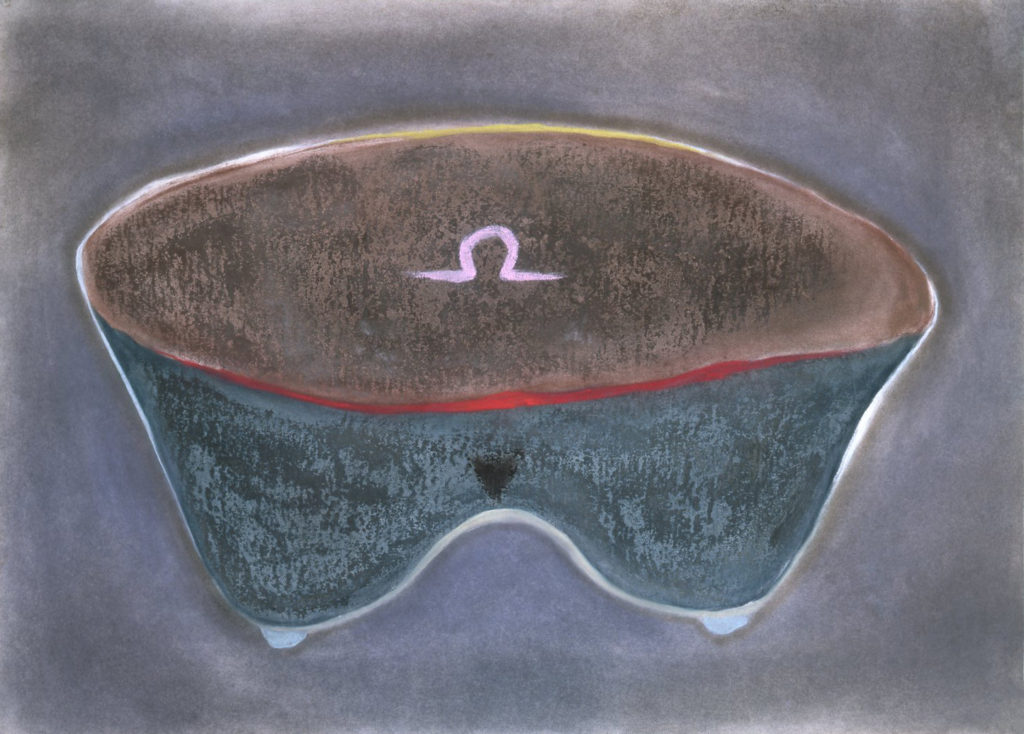 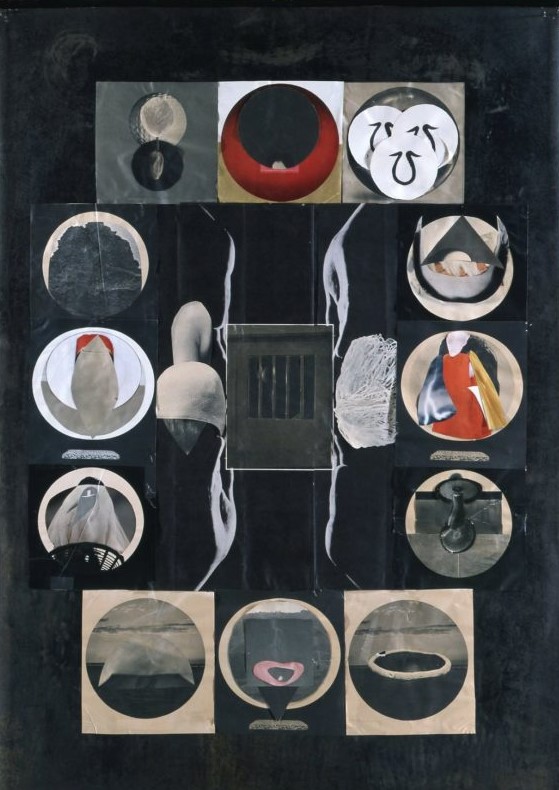 Matsuzawa’s works are thus imbued with the extremes of scientific inorganicism and earthy indigeneity, a hope for the unknown and a fascination with the gloomy and macabre, and symbolic life and death.

Rather than being completely separate from the secular world, they conjure up transparent concepts in a world filled with the material. It was only while faced with a vast number of Matsuzawa’s artworks and materials in the place that nurtured his work and philosophy that I came to this realization.  Contemporary art as an intellectual endeavor has often failed to properly engage with Matsuzawa’s words, which seem to either be possessed by the divine or to veer toward eccentricity. This exhibition neither dismisses the artist’s peculiar spirituality nor reveres himexcessively, encompassing instead all the various elements that derived from Matsuzawa’s entire life.

In addition, a museum, coffeeshops, sundry stores, and a wide variety of other venues in the town of Shimosuwa, where Matsuzawa was born and raised, are celebrating the “100th Anniversary of Matsuzawa Yutaka.” Larger collections of paintings and other materials are being displayed at a museum, while the coffeeshops and stores are exhibiting a handful of prints and drawings each, inviting visitors to explore the town while viewing Matsuzawa’s works. 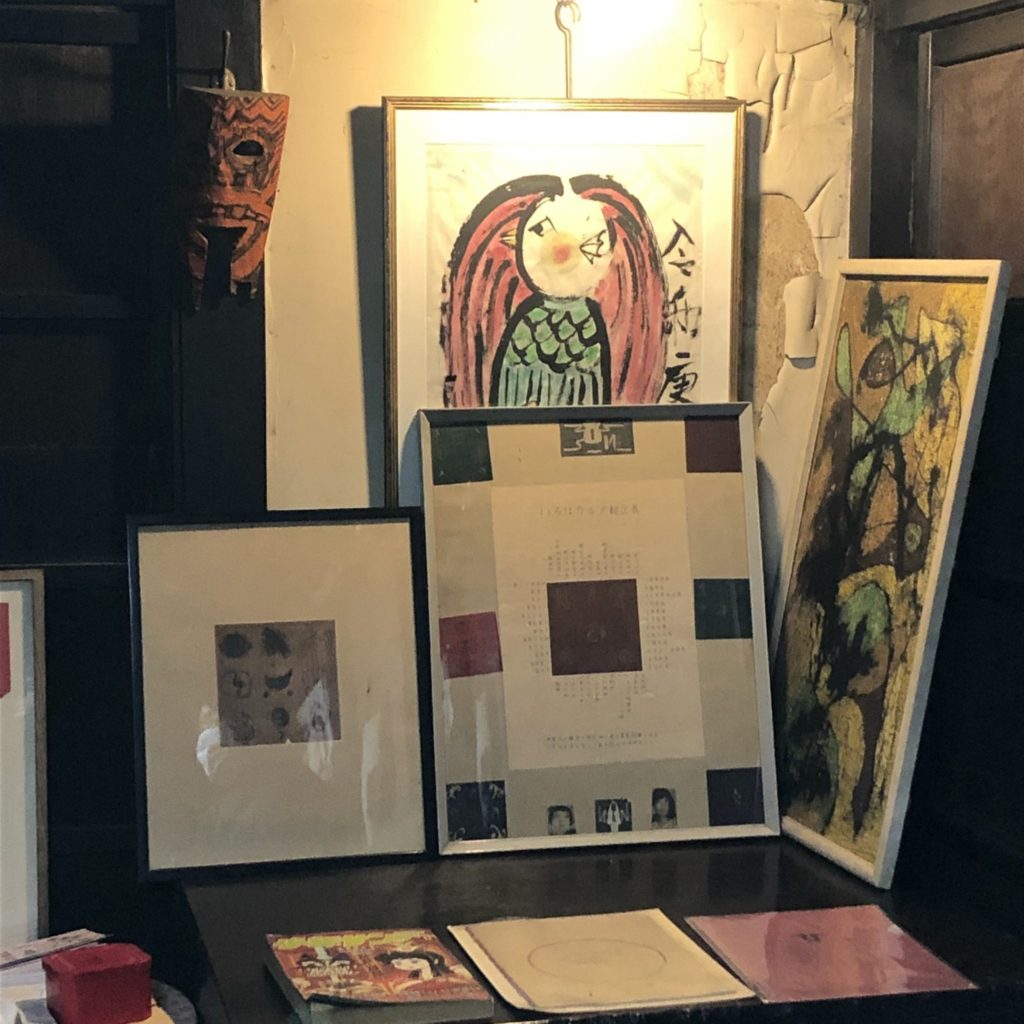 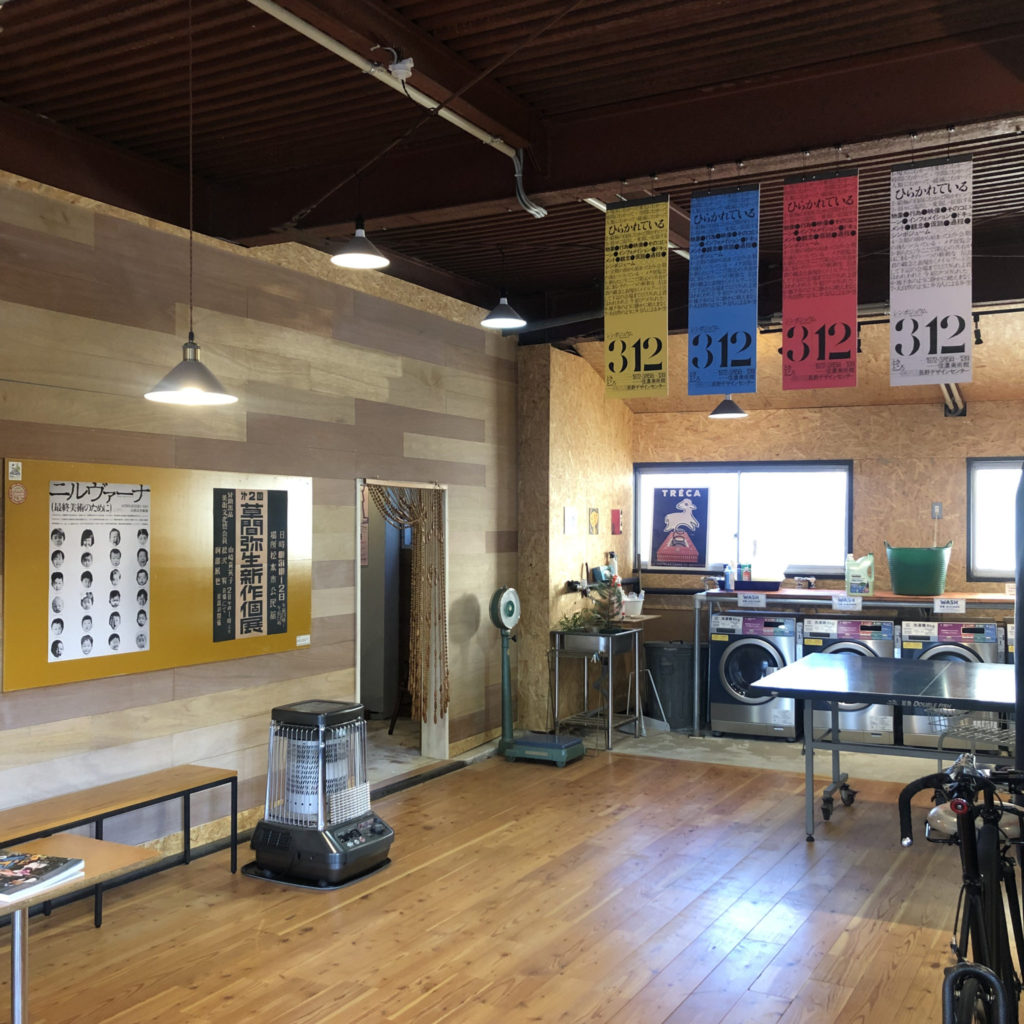 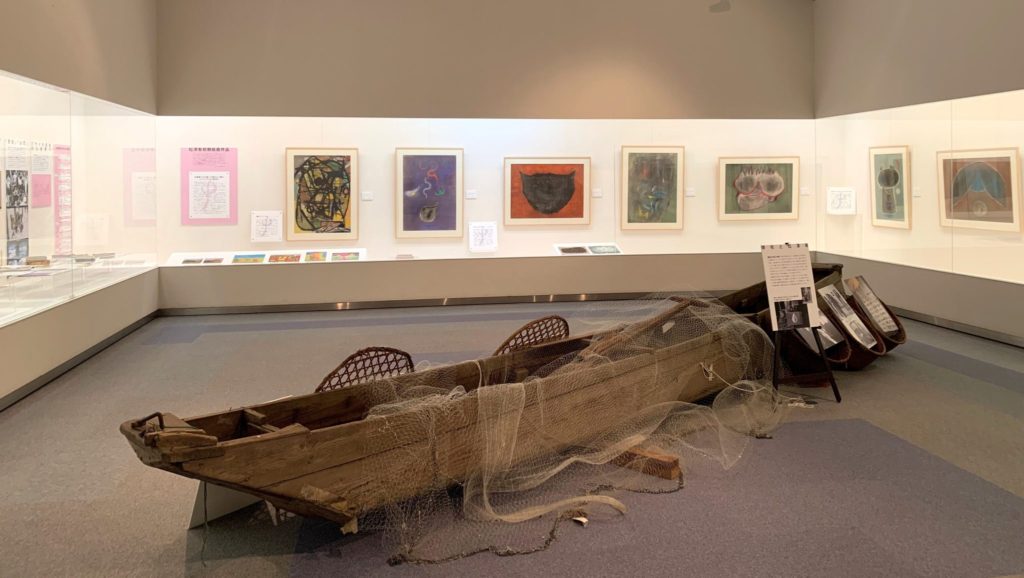 Suwa is famous for the Onbashira Festival, but it also keeps an indigenous culture older even than the Shinto formulated by the Yamato court. Matsuzawa’s work was clearly influenced by ancient religion and its rich symbolism of life and sexuality. In addition to his creative activities, the artist worked as a mathematics teacher for evening classes at a local high school from 1949 to 1984, and in 1973 opened the Suwa branch of the Bigakko art school. The way in which he published one radical artwork after the other while sticking to being an ordinary member of the local community in Suwa brings to mind the saying “The great sage walks among the people.” The imperative pronouncements in Matsuzawa’s works, which he created collaboratively from early in his career, were above all about communication. Matsuzawa is likely to have viewed his art and his own body as media of such communication, and attempted to relay his concepts directly. The objects of his communication were not only humans but animals, plants, the lake itself, and the- space.

I show it not only to humans, but to the rocks and trees, to heaven, to the birds and beasts, to music, to self-propagating machines

Behold, there it is, nothing but a white circle

Yutaka Matsuzawa, postcard painting “A Blank Painting for All Living and Non-Living Beings,” 1967

Direct communication of “concepts” that cannot be seen or touched is a practice far more uncertain than appealing to the senses with color and form. However, there is no need to dwell too much on this. We need only conjure up a white circle in our mind—just like the birds, trees, and lakes would.