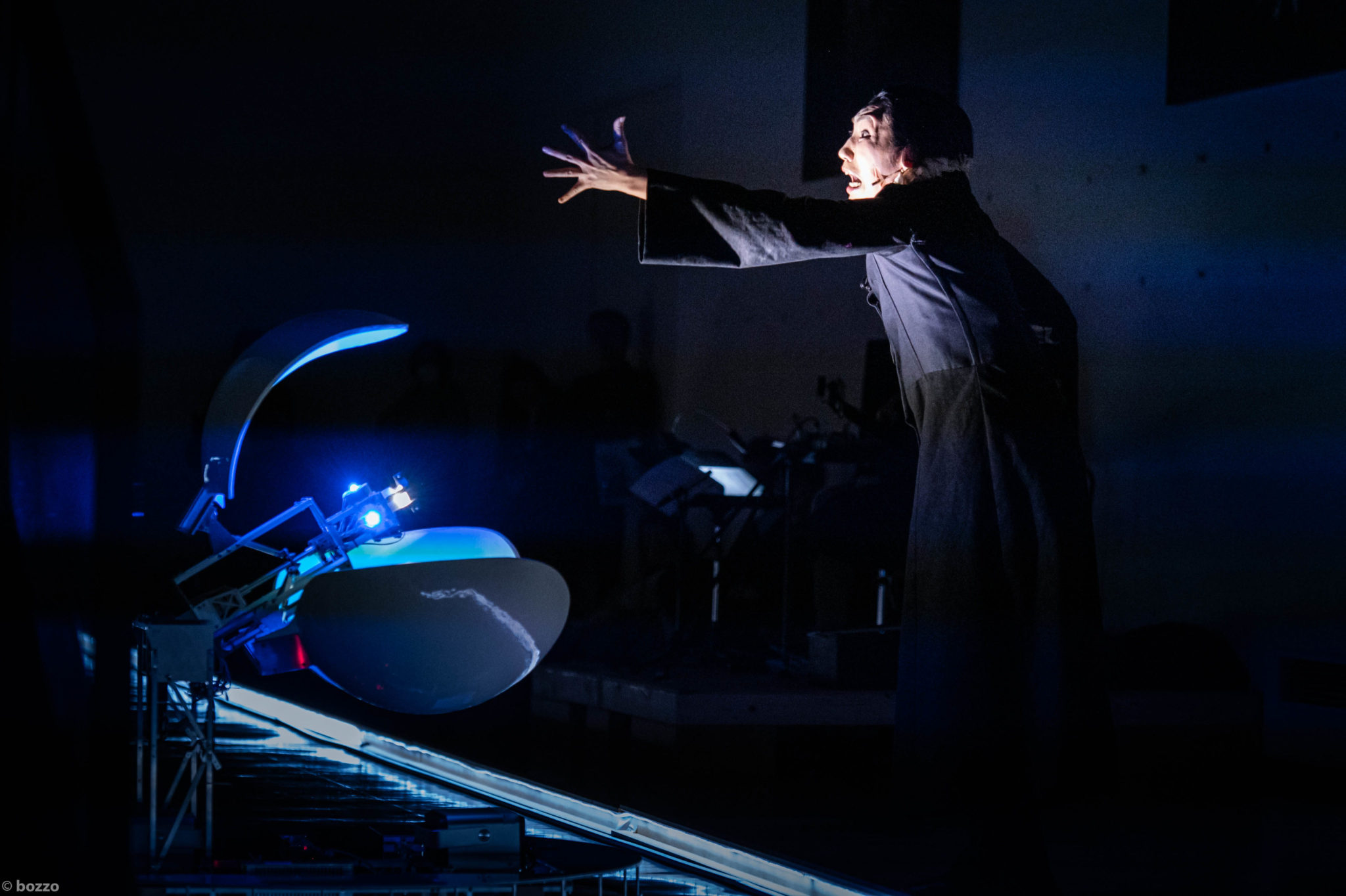 “MIWA YANAGI: Myth Machines,” the artist’s first solo exhibition in 10 years, has toured five cities between February 2019 and now. In addition to notable past work, it features the new photographic series “The Goddess and the God separate under the Peach Tree,” which draws on the story of the god Izanagi throwing peaches at his pursuers (as recounted in the Kojiki). As part of the exhibition, Yanagi also launched the “Mobile Theater Project” together with universities and other institutions from Kyoto, Takamatsu, Maebashi, and Fukushima, creating four machines that automatically perform scenes from plays by the likes of William Shakespeare and Heiner Müller without human involvement.

Furthermore, the exhibition spaces have all played host to “MM,” a live performance staged and directed by Yanagi, in which the four machines are joined on stage by the transgender actor Noemi Takayama. Here, Mneme, the first machine, apathetically picks up skulls from a conveyor belt and throws them at a wall. Terpsichore (which resembles the Marcel Duchamp sculpture “Bottle Rack”) reacts to that sound, vibrating like the reflexive applause of an audience, while Melpomene wriggles and flaps its limbs, which have been tied together with a rope. The main “myth machine,” Thalia, moves around flashing its LED lights, illuminating things, playing music, and speaking lines. Yanagi describes this as “an attempt to establish tragedy and comedy in wastelands and frozen landscapes, where neither stories nor song have ever existed,” but the machines’ precise replaying of the same lines, as in perpetual motion, also makes them resemble “teleprompters” that serve up words to be idly repeated by humans who have given up on thinking, or secretly programmed “terror machines” intended to facilitate reckless politics.

Takayama, the only human in the performance, exhibits a boundless androgynous charm in playing multiple roles with impressive vigor. “MM” quotes from Hamlet but also from Hamletmachine, a reinterpretation of Shakespeare’s classic by the German dramatist Heiner Müller, whose career spanned his country’s period of division into East and West, as well as from Müller’s Media Material, which is based on Greek myths. The monologue is filled with mournful words, torn into thousands of pieces to form a sad collage, but the on-stage exchange of a flesh-and-blood voice and inorganic noise is reminiscent of the world in sci-fi movies such as 2001: A Space Odyssey and Passengers, adding a hint of dry humor to the boundless dystopian despair.

Having first appeared in the art scene in the 1990s with “Elevator Girl,” a series in which she focused on young women in a specific service profession, Yanagi questioned stereotypes of female identity in the 2000s with “My Grandmothers,” in which young women played themselves half a century later. Her insights on femininity have come to exceed gender theory, moving toward an understanding of the female as a being that transcends the border between the sacred and the secular. In the 2010s Yanagi turned her focus to performing arts, a domain she has been interested in ever since her mother and grandmother took young Miwa to see Takarazuka shows. She has taken on bold projects, such as bringing avantgarde art from the pre-Pacific War years to the stage and putting on open-air plays on a stage-bearing trailer made in Taiwan. In these initiatives, through which she has borne the considerable burden involved in putting living beings on stage, Yanagi’s unwavering focus has been on spotlighting, in a hotly critical manner and by reflecting on recent history, the issues faced by contemporary Japanese society.

Elevator Girl “Looking for the Next Story I” (part), 1996 Collection of Takamatsu Art Museum

Now, as her current exhibition? one that spans two imperial eras, Heisei and Reiwa? is coming to a close, we may ask how Yanagi will leverage the power of her creative world, one that straddles the two genres of fine art and theatre and is distinguished by its unimpeded manipulation of time, truth, and fiction. The creative impulse does not yet hit any clearly defined aim in her latest work, but Yanagi’s focus appears ever more fixed on the universality of history and the essence of what it is to be human. 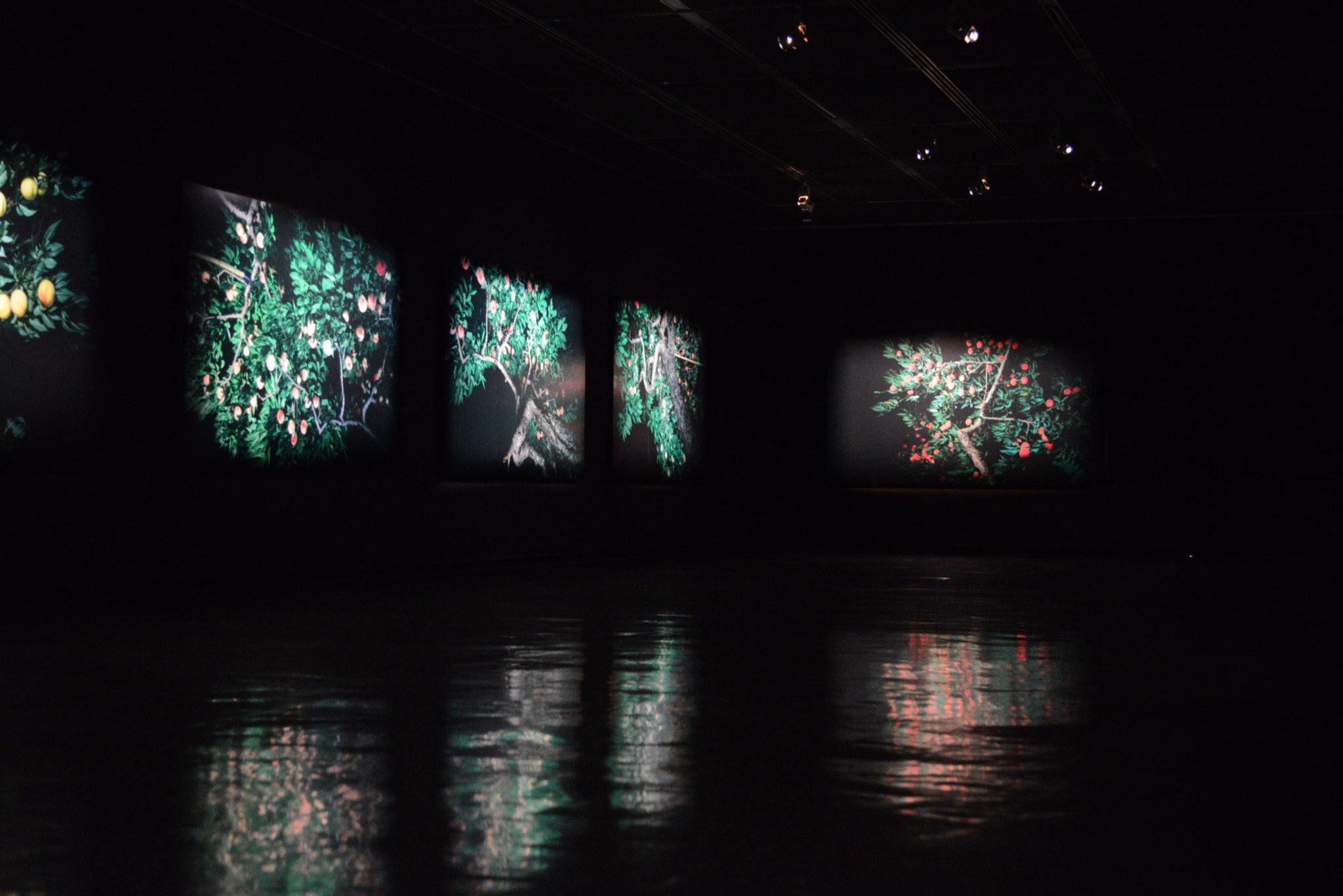 “The Goddess and the God separate under the Peach Tree,” Installation view

“The Goddess and the God separate under the Peach Tree,” in which Yanagi’s camera has captured peaches in a Fukushima orchard at night, takes the mythical knockabout comedy surrounding the two deities’ farewell and uses it to express fruit-bearing, androgynous vitality, represented by a single tree’s male and female flowers. In the machine-led performance, the myths and plays repeatedly reveal antonyms such as life and death, man and woman, and nature and civilization; Yanagi’s way of uncovering these structures of eternal opposition. Together, the two artworks reveal a truly mythical and representational landscape, one that cannot be defined in terms of time and space. In it stands absently the “angel of history*”; battered not by rubble but rather by skulls and peaches, thrown by one “myth machine” while another taunts their opponent by endlessly reciting comedies and tragedies; powerless to do anything but gaze at the catastrophe that’s been left to unfold.

*See Walter Benjamin: “On The Concept of History.”