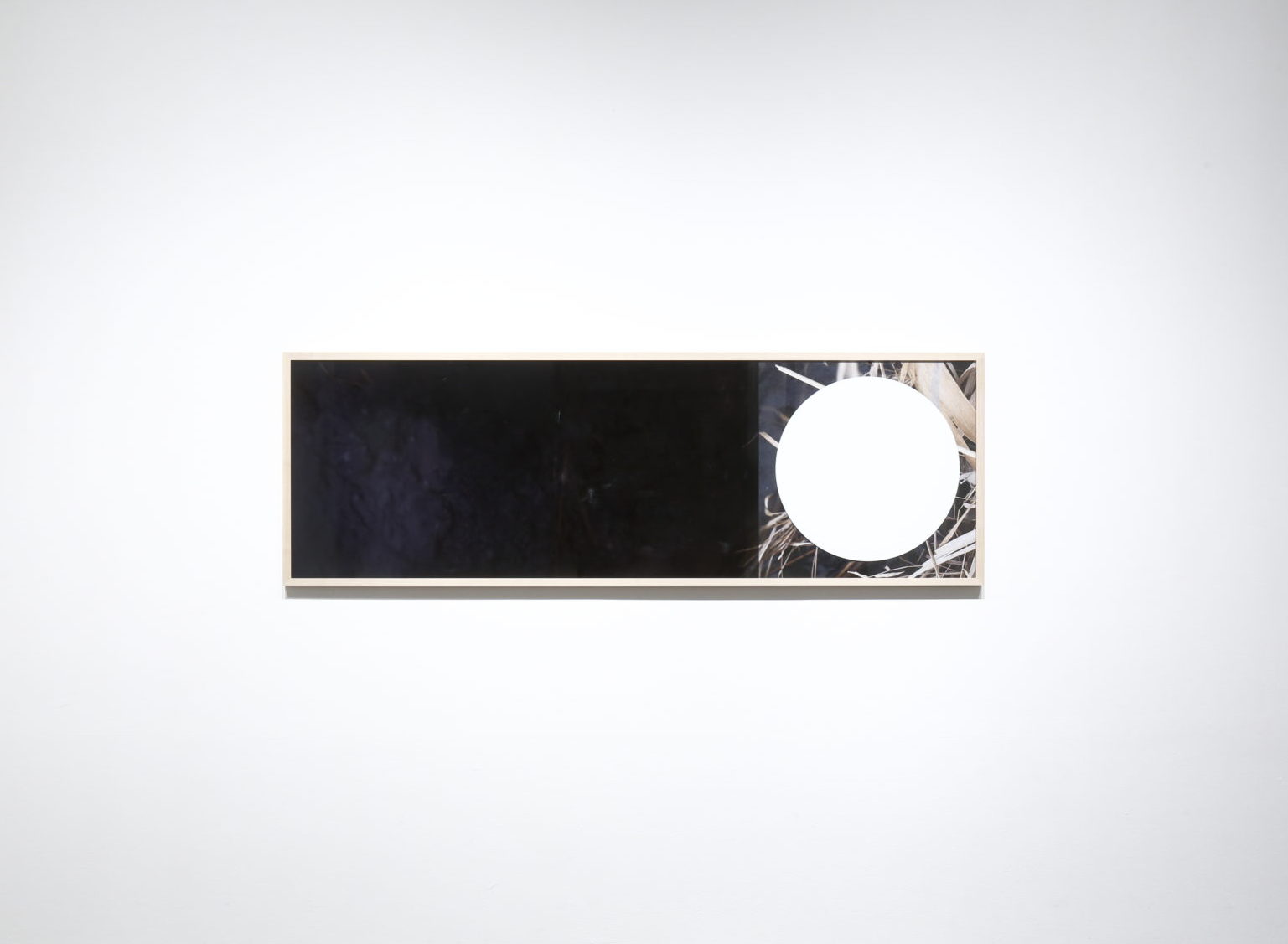 Painting and…, a series of five solo exhibitions featuring five painters, curated for Gallery αm by Mika Kuraya, senior curator at the National Museum of Modern Art, Tokyo, explores the painters’ specific motives for adopting their individual styles, and the special relationships their works establish with elements external to painting. Teppei Soutome’s solo show, first in the series, examined the artist’s unique method of layering color planes to repress other colors, and attempted unification of the painterly and reflective processes through integration into the painterly process of his hitherto repressed reflections on important events in modern and contemporary history.

The exhibition’s conceptual framework also gave Soutome the opportunity to contemplate the significance of the painterly method he has consistently pursued since 2012. Soutome’s painting is characterized by its departure from the first meaning of painterly illusion—i.e., social or cultural context referenced by the imitation of reality—toward realization of the second meaning: the sensory effects of pure visual experience, induced by color, shape, thickness and shallowness of the painted plane, brightness and luminosity. 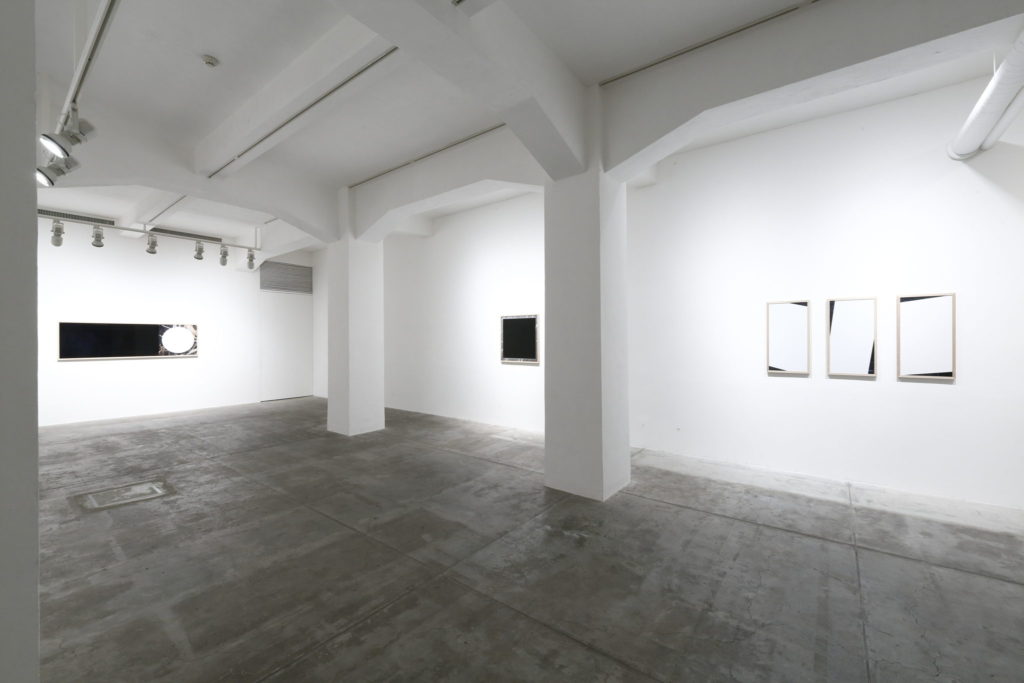 Soutome has explored the materiality of his painting through the use of simple geometrical forms and a method of painting in monochrome over previously painted color planes, since his 2012 painting He, She, You, and Me, which replaced his former trademark style of using bright color fields to contain the basic structure and impressions of such organic objects as cats, women, and trees, with interlocking shapes painted in black, white, and gray. This method has strengthened the materiality of his painting, making the spectator focus on subtle visual effects. The limited visual vocabulary has allowed spectators to enjoy the “illusion” of movement and multi-dimensionality all the more, effected by such simple arrangements as the combination of black and white triangles, or contrast between thin bright lines and monochrome planes.

According to Kuraya, the commissioning of Soutome for the first show of Painting and… was inspired by a conversation with him in 2017, in which he confessed that his method of repressing colors was triggered by the psychological effects of the 2011 Great East Japan Earthquake. With his initial questioning of painting’s inability to intervene in historical crises in mind, he sought, in his familiar area, visual experience that embodied his direct contact with modern history and frustration with its opaque meaning, while searching for the proper method to present this conceptual process in “painterly” ways. For the exhibition here he created five photo-mediated tableaux, based on photographs he took one winter day of the Watarase Yusuichi retarding basin, located in Tochigi Prefecture where he lives, and produced by the layering of six mediums: 1) wooden frame, 2) wooden board, 3) photographed images, 4) acrylic plate, 5) glass plate, and 6) silk-screened images. These were installed along with one piece of straight photography.

On the opposing walls close to the show’s entrance, three photo-mediated works were hung; each featured either a black circle, a white rectangle or a black rectangle silkscreened on the outermost layer, blocking the photographic image, with the opaque gray veils created by the layering of different mediums making the images even more indiscernible. At the same time, the black circle silk-screened onto the glass plate created a mirror surface that reflected spectators’ faces and details of the gallery space, breaking down the distance to ponder the painting’s fictive autonomy, while forcing the spectator to confront the superfluousness of their own presence as an actor endowing the painting with meaning.

Shifting their gaze to a work with the surface covered in solid white color planes, and further to the work displayed on the farthest wall, which showed distinct images of the landscape peering from beneath a white circle, juxtaposed by a dark gray rectangular area resembling standing water, the spectator would realize that the installation traces, in the painterly method of layering colors, the physical and psychological effects of the photographic vision of a landscape with snow on the ground, muddy earth, and dead grass. The techniques of hiding and revealing images also form an ironic analogy with the complex layering of historical facts in the Watarase Yusuichi basin, which was created in 1906–1918, forcefully evicting all the villagers, to reduce the poisonous effects of the notorious Ashio copper mine, yet now is a site of biodiversity and communal sports and recreational events. 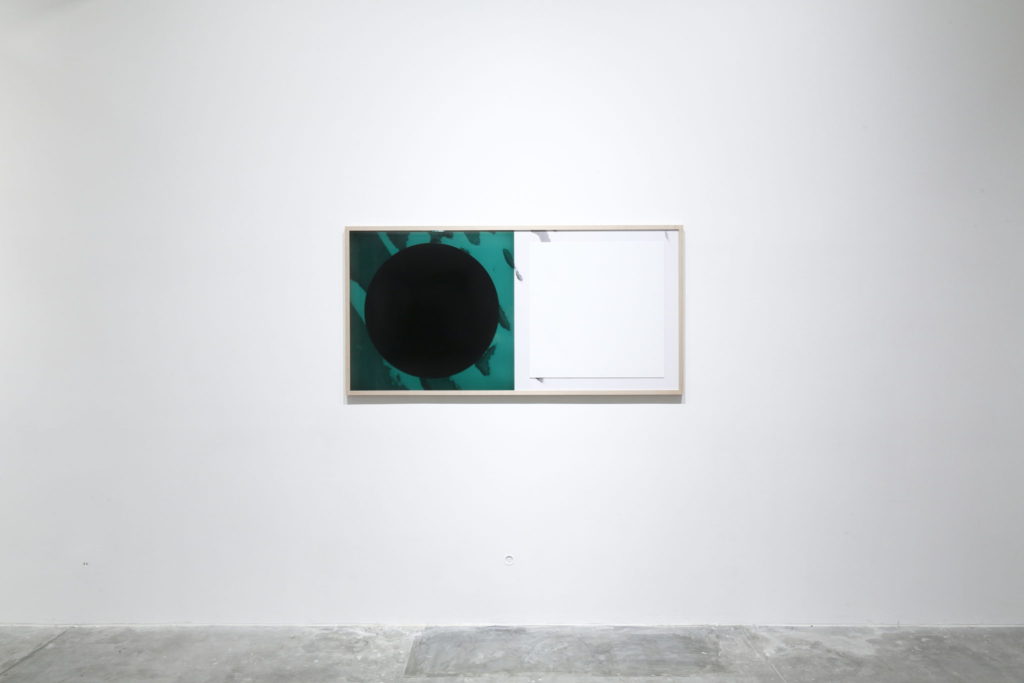 Subtle “painterly” differences could even be identified in the first three tableaux. Such visual phenomena as the blue tones of the black circle, or traces of the fragmented images of grass streaming beneath the deep gray sheen, are “illusions” created by such delicate technical adjustments as inserting a green color area into the gray background, or coloring the acrylic plate. They give the spectator the visual experience of a phenomenon that does not actually exist in the painting, but is produced on their retina by the carefully selected painterly conditions.

Soutome’s installation thus demonstrated how the essence of his painting can be communicated through a medium other than painting, by paradoxically giving up the act of “painting,” which is essential to the production of a picture, and commissioning the layering of the photographic planes, as if to abandon authorial control. It indicated that the materiality of his painting is ultimately supported by the complexity of effects that occur across the boundaries of the visible and invisible, as well as the actuality of such visual experience.

Written and translated by Midori Matsui

Midori Matsui, a Tokyo-based art critic, has extensively published on contemporary Japanese art in many books and exhibition catalogues including Super Rat: Chim↑Pom(Tokyo, Parco. Co. Ltd, 2012); Ice Cream (London: Phaidon, 2007), Little Boy: the Art of Japan’s Exploding Subculture (Japan Society and Yale University Press, 2005). Her books include: Art in the New World (Tokyo: Asahi Press, 2002); The Door into Summer: The Age of Micropop(, for Art Center Mito, Japan, and Winter Garden: The Exploration of the Micropop Imagination in Contemporary Japanese Art in 2009.