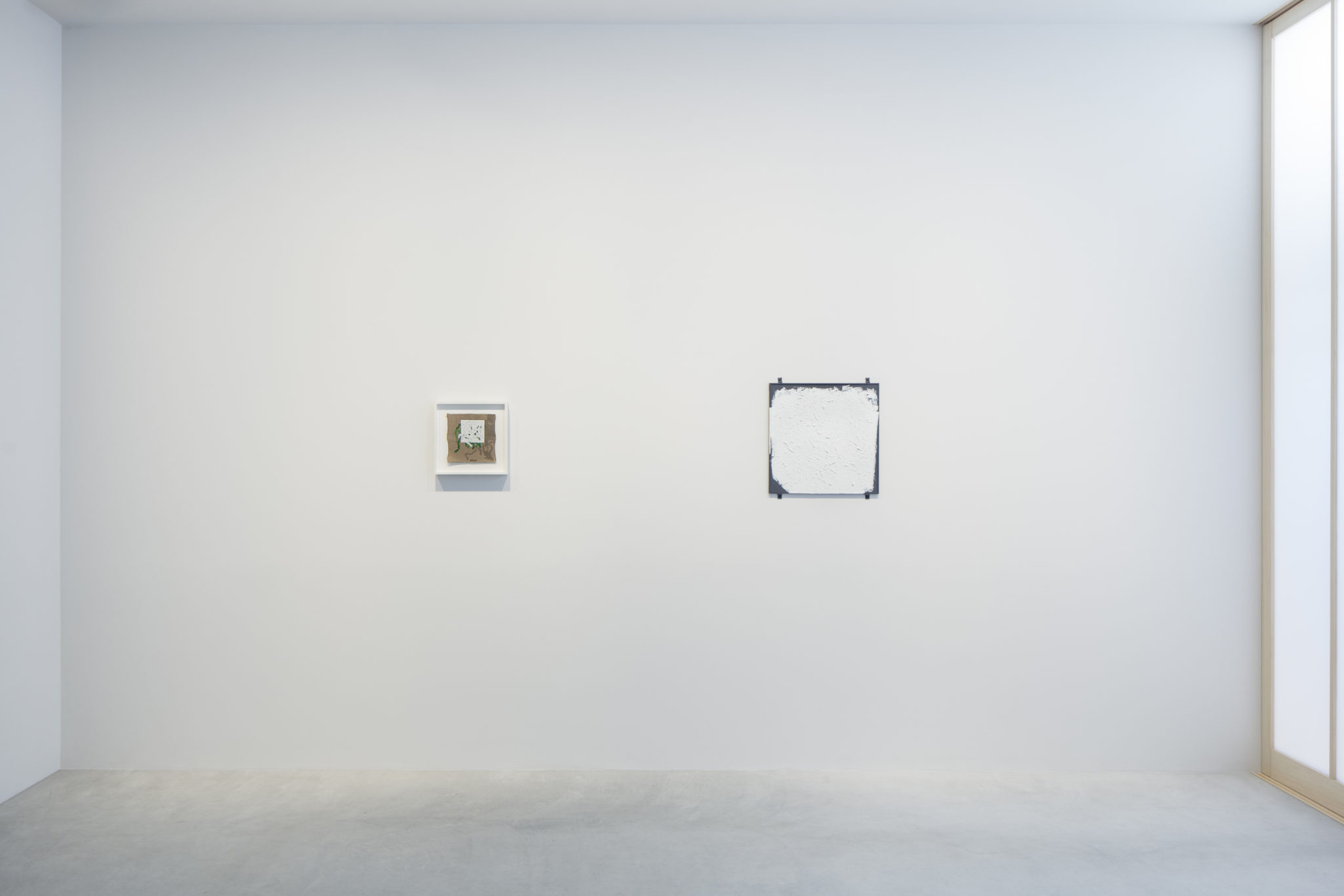 “There is never a question of what to paint, but only how to paint it.”

Robert Ryman is an artist who has been creating works based around the color white for about sixty years since the mid-1950s. An exhibition of eleven works that Ryman, who built himself a reputation as a unique figure in American contemporary art of the postwar era, made between 1961 and 2003 (and each of which is of such high quality that it wouldn’t look out of place in any museum collection) is currently showing at Fergus McCaffrey Tokyo, a new gallery that opened this March.

Robert Ryman was born in 1930 in Memphis, Tennessee. When he moved to New York at the age of 22, his motivation was not to become a painter, but to become a jazz musician. A day job as a security guard at the Museum of Modern Art gave him the opportunity to encounter the most cutting-edge abstract paintings of the day, by the likes of Mark Rothko, Barnett Newman or Willem de Kooning. In addition to that, he made friends with Sol LeWitt and Dan Flavin, two fellow same positions at the museum, who both went on to become key players in the realm of minimalist art. Regardless of his non-existent experience with painting, Ryman gave up his dream of becoming a musician, and in 1955, began to create works in his own unique style – limited to the attributes “white” and “square” – that he continued to pursue up to this day.

I seem to remember seeing a photo in an American art magazine quite some time ago, which showed photographs and postcards of Ryman’s works methodically lined up in chronological order in his studio. I suppose looking at these on a daily basis helped him avoid repeating the same thing, and at once get inspiration and ideas for his next work. But also the fact that he had been studying the displays at MoMA for several years before commencing work on his first own painting is certainly an outstanding feature in Ryman’s career. That’s because for him, the main theme of art is not “what to paint,” but his focus has been on the question “how to paint it,” so his observations of his own and other people’s works must have had a profound effect on his activities.

Back when Ryman was still relatively unknown, he was reportedly told that his art was “his art is about nothing and that his white-on-white works are nihilistic.” Needless to say, this deprecating comment about using white paint and painting no images was far off the mark. The limitation of color and shape must have been something that rather gave Ryman more creative freedom from the beginning. The creative act itself, with variations of such elements as traces of paint, the way it is applied, and materials used, along with the emphasis on material aspects, is what ultimately shaped a form of art that is absolutely unique to Robert Ryman. 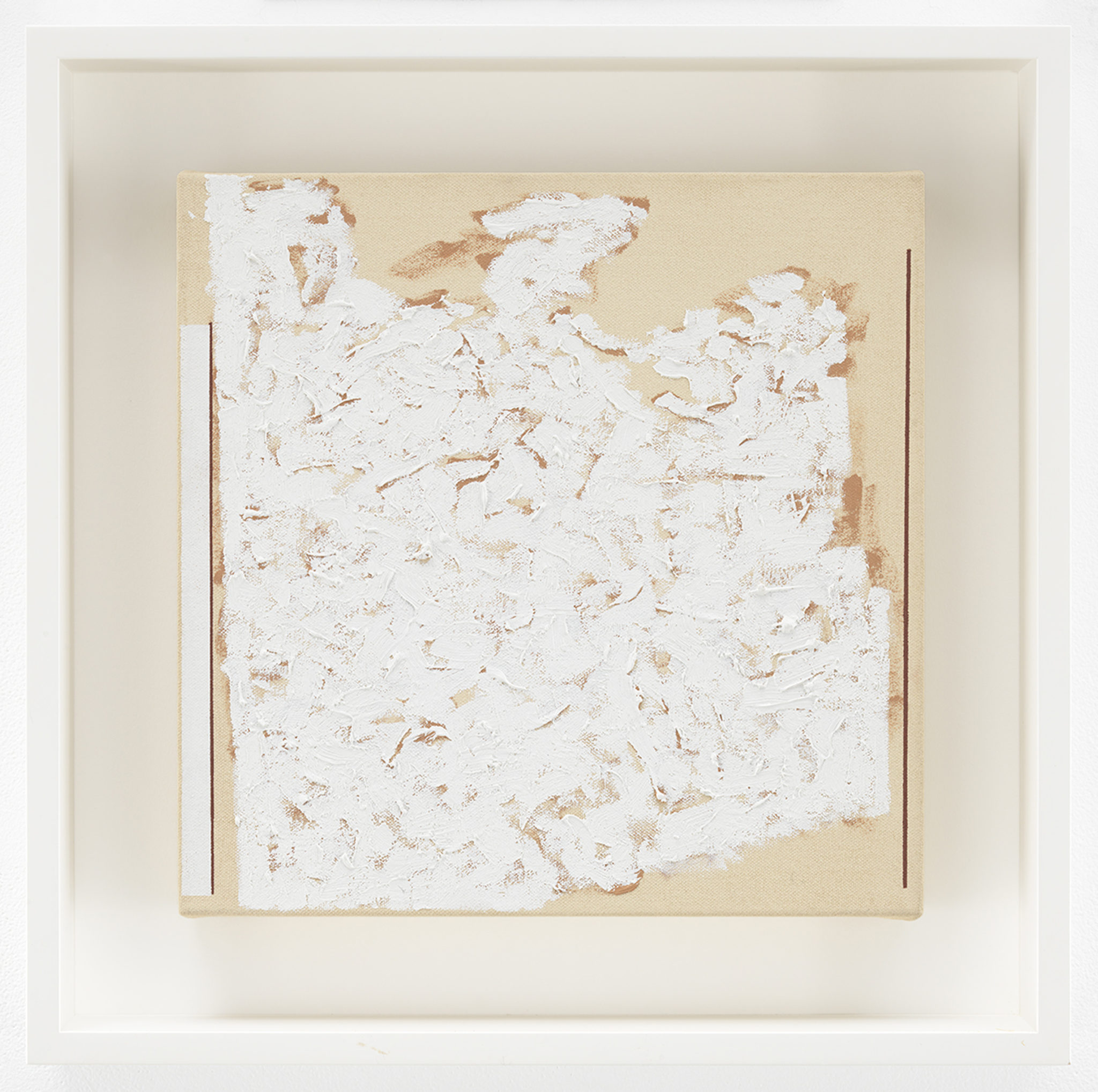 The works on display this time, such as ”Untitled, 1969,” painted with acrylic paint onto polyester; ”Stamp, 2002,” which is reminiscent of Yayoi Kusama’s white infinity nets painting; and ”Concert 1, 1986,” the largest item at this exhibition; and ”Untitled, 1980/2003,” where the clasps that hold the painting to the steel plate are part of the work, are results of various experimentation with thick or layered application of paint, all revolving around the central theme of white color. In the end, when comparing the various materials, application methods and exhibition styles, there is not a single piece that is purely white, whereas parts that are intentionally left unpainted so that the materials underneath – canvas, cardboard or linen – are visible through the gaps are additional elements that demonstrate Ryman’s awareness of processes and materials.

One aspect that I personally consider as possibly the most elemental regarding Ryman’s works is the amount of color in the space they are exhibited in. Considering the fact that these are white items displayed on white walls, the impression they give is completely different depending on the conditions of artificial and/or natural light. To everyone who has the time, I recommend going to see the exhibition on a sunny day, on a cloudy day, early in the morning and late in the afternoon, to take a look at the works under different lighting conditions. The gallery, established by Bill Katz, a famous American designer in collaboration with an architectural office in Tokyo and a Kyoto-based craftsman, is a space illuminated by soft light through Japanese paper screens that makes an exquisite stage for Ryman’s works, in which you will find yourself invited to a session of ”meditating by watching.”

An exhibition of works by the American contemporary artist Robert Ryman is currently open at Fergus McCaffrey Tokyo. To give a concise overview of his creative work spanning several decades, Ryman shows eleven paintings made between 1961 and 2003, from March 24 until May 19.