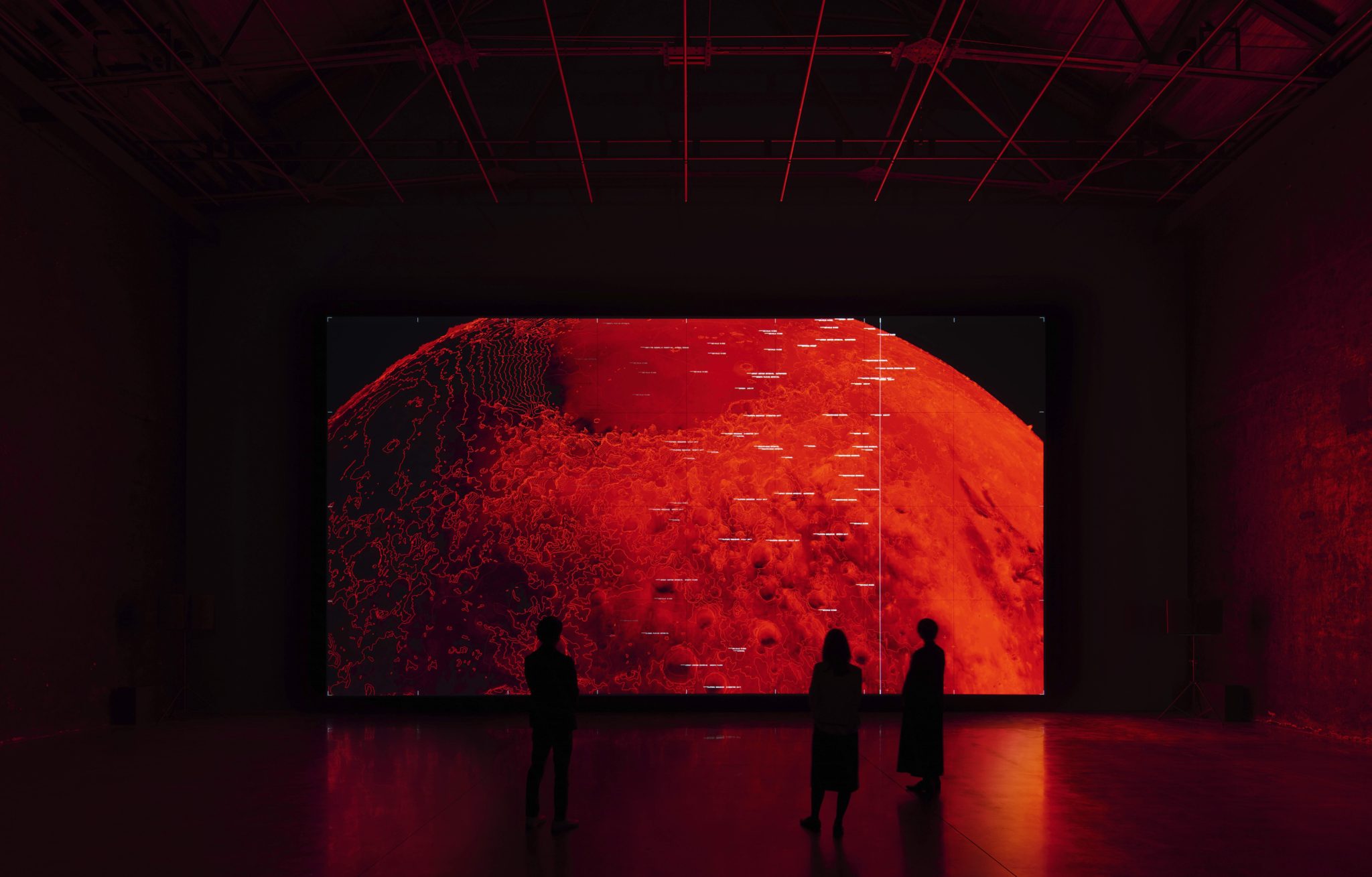 Paris- and Kyoto-based artist and composer Ryoji Ikeda is currently holding his first major exhibition in Japan in 13 years at the Hirosaki Museum of Contemporary Art in Aomori. Opened in 2020, the Hirosaki MOCA occupies a brick warehouse more than 100 years old, renovated under the concept of “continuation of memories” and “rebirth of landscape” and turned into a museum that mainly exhibits contemporary art. The architect behind the renovation is Tsuyoshi Tane, who like Ikeda is based in Paris and has given new life to many historic structures in Europe. Though he did use titanium for the roof to give the building a modern look, Tane did his best to preserve the original materials inside, such as leaving in place the walls painted with black coal tar that date to the time the facility was used as a warehouse. The result is a space that clearly differs in quality from the usual “white cube” style, and succeeds in making the museum a distinctive one.

Ikeda explains that he decided on the content of the exhibition the moment he arrived at the Hirosaki MOCA after receiving an offer to exhibit there. “I had seen pictures and drawings of the museum beforehand, but when I actually visited it for a preliminary inspection, I made up my mind within two or three minutes,” he says. “Of course, you think about a lot of things after that too, but I generally make decisions based on first impressions. Tane’s renovations don’t involve the ego of an architect who fills in spaces with concrete…he doesn’t do anything unnecessary. So I’m responding to that, in a way. For me, this is the optimal solution.”

Ikeda often refers to himself as a “composer.” As opposed to its obvious meaning in the world of music, in the art world the word refers to “one who creates compositions.” For Ikeda, who often combines sound and video in his works, the composition of these two elements is key – though perhaps even more important is how to arrange sound and video in a given space.

“When exhibiting my pre-existing works, I make sure to always optimize each space for maximum effect,” he continues. Indeed, at his solo exhibition at the Museum of Contemporary Art Tokyo in 2009, Ikeda used the space as it was, eschewing modifications to the walls almost entirely. The space comes before the decision on which works to install there and in what form. 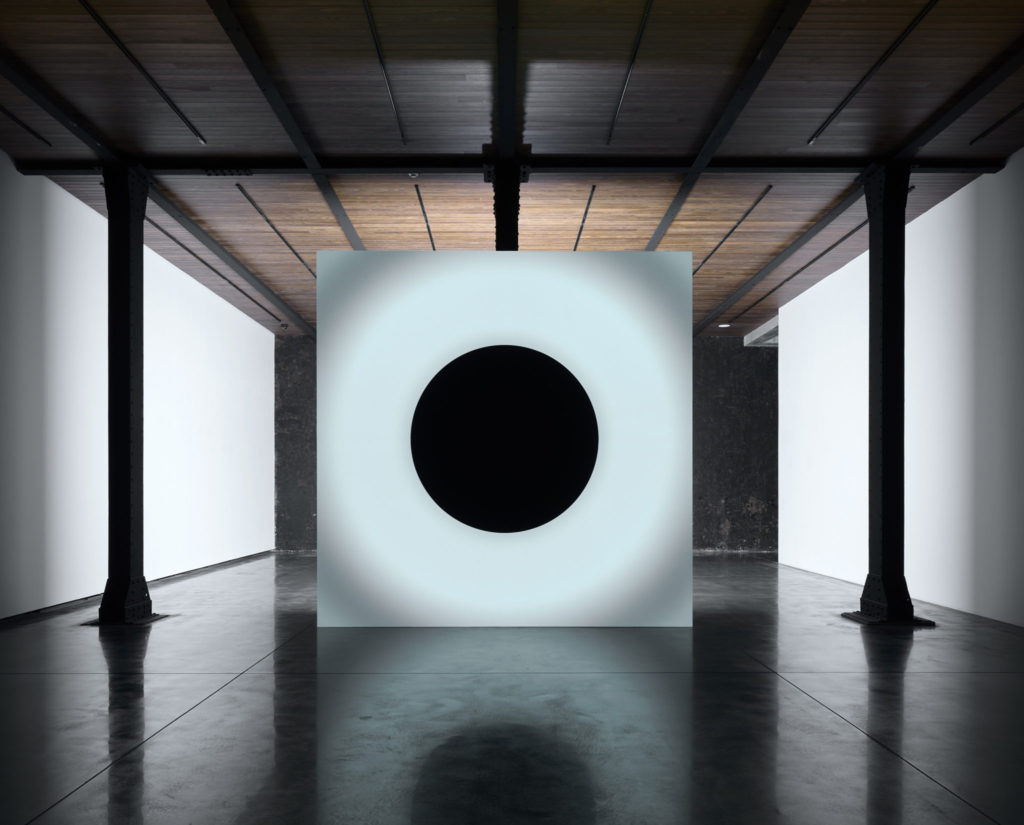 Passing through the foyer and entering Gallery 1, one is confronted with a towering square object in the center that resembles a thick wall, onto which an eye-catching jet-black circle is projected via DLP projector. This is point of no return, first exhibited in 2018 at the Eye Filmmuseum in Amsterdam. The black circle possesses an absorbing depth, reminiscent of a black hole. It appears to emit a white light around it, sometimes rippling and producing a variety of colors. However, you can’t be confident that you’re perceiving these colors correctly. Later on, when I looked at the video I took of the work with my smartphone, I noticed colors that I couldn’t perceive with the naked eye, and I’m not sure if it’s elements in the footage causing false colors or if something beyond the capacity of my optic nerve is being emitted.

Turning to the other side of the square object, a floodlight fitted with an HMI lamp is drawing a white circle with a tremendously strong light—like a “white hole” to contrast with the black hole. In the jet-black space coated with coal tar, the two circles appear to be the entrance and exit to a different universe or dimension.

While taking some photos, I noticed there were reflections coming off the floor. This is unusual because Ikeda often uses carpets in his exhibitions to reduce sound bouncing off hard surfaces. The floor, left bare here at the expense of acoustics, accentuates the presence of the black walls and frames that remain from the original construction, creating a resonance between the space and the artwork.

Guided by a familiar pulsing sound, visitors proceed down a narrow passageway leading to the next gallery containing data.flux [n°1], which was unveiled at 180 Studios in London in 2020. In Japan, a giant version of this work called data.flux [LED version] was exhibited in Kyoto’s Amanohashidate last year. Here, like in the London version, organic LED panels are connected to form a long, 84.8 x 1312.2cm screen that is suspended from the ceiling. In a claustrophobic, tunnel-like space, images with high-contrast black and white lines flow overhead. White, scan-like lines occasionally run through, seemingly scanning the viewer. 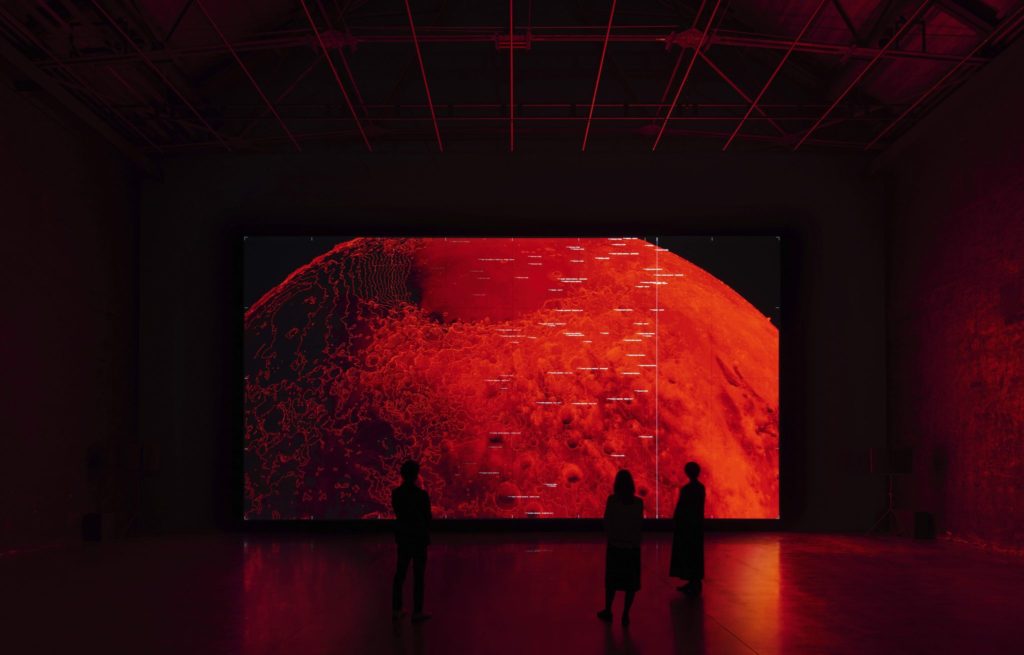 As one moves back and forth along the passageway to listen in on the delicate sounds coming from the many speakers installed on the left and right walls, a thunderous roar that breaks through the hums is heard from the space beyond. This is data-verse 3, which occupies the entirety of the atrium-like Gallery 3. Said work is the final part of a trilogy that also includes data-verse 1, unveiled at the Venice Biennale in 2019, and data-verse 2, exhibited at a temporary Audemars Piguet event site in Roppongi Midtown in the same year. A gigantic video work projected across a wide open space reaching 15 meters in height that at times divides the vast canvas in a logical manner, it invites the viewer on a journey from the atomic level to the universe, thereby evoking—unusually for Ikeda’s art—a narrative element. This is why many viewers stay for long periods of time, watching the film from beginning to end over and over again. 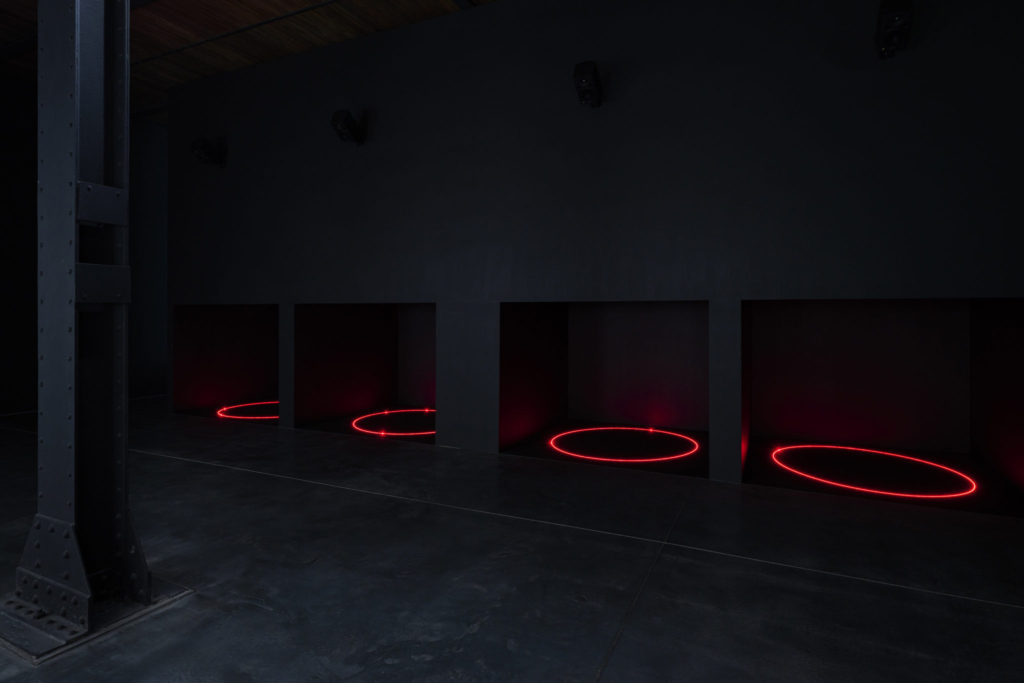 After viewing this huge artwork in the vast space, one moves to Gallery 2, which contains exp #1-#4, a work featuring red laser lights tracing circles and lines in a cubic space ordered near the floor, and on the opposite wall grid system [n°2-a]-[n°2-d], graphic works on which coarseness and density are printed with lines. Ikeda’s art tends to attract attention for its flamboyant aspects, but his aesthetic sense really shines through more strongly in neat works such as these. 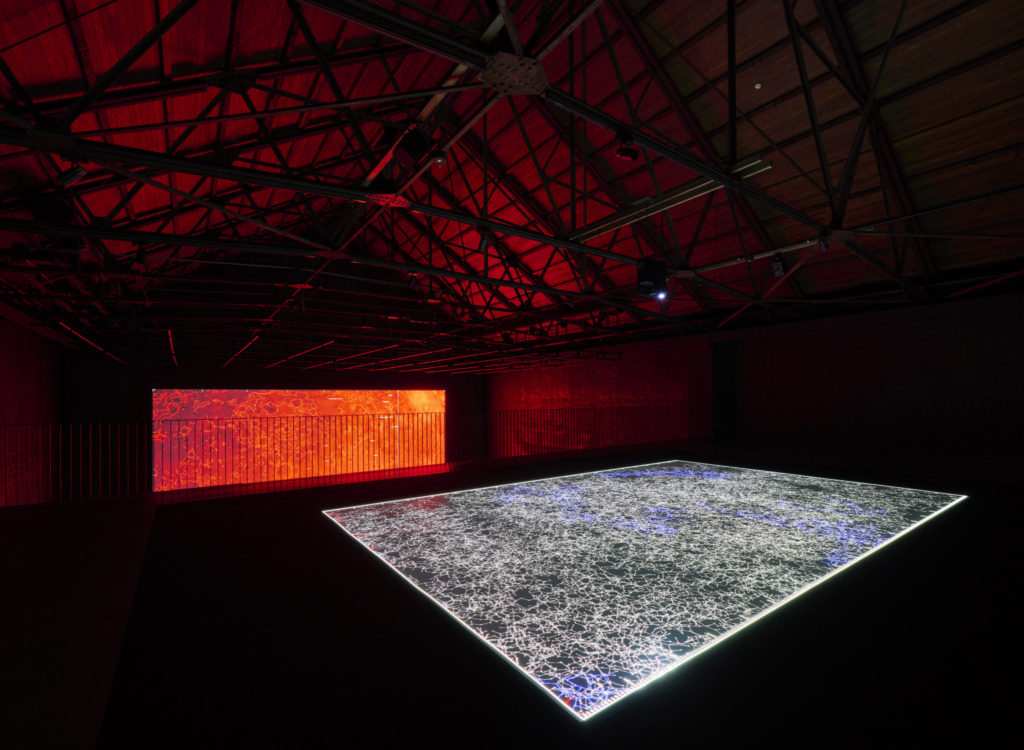 Following the venue’s directions, one ascend to the second floor and Gallery 5, located directly above Gallery 2. This is where data.tecture [n°1], with its screen on the floor, is set up. While footage created from various data flows beneath one’s feet, the lights and sounds of data-verse 3 intrude relentlessly from the atrium. For an artist working with sound, interference between works is a major problem, and at previous solo exhibitions Ikeda has always sought to control this element, e.g. by synchronizing his works with each other. Here, however, he has decided to relinquish that control. Instead, each work is played back on a loop independently of the others. The differing lengths of the works causes interference unintended by the artist. Perhaps not controlling is a form of composition. And in fact, watching data-verse 3 while feeling data.tecture [n°1] under my feet was the most blissful experience I had at this exhibition. 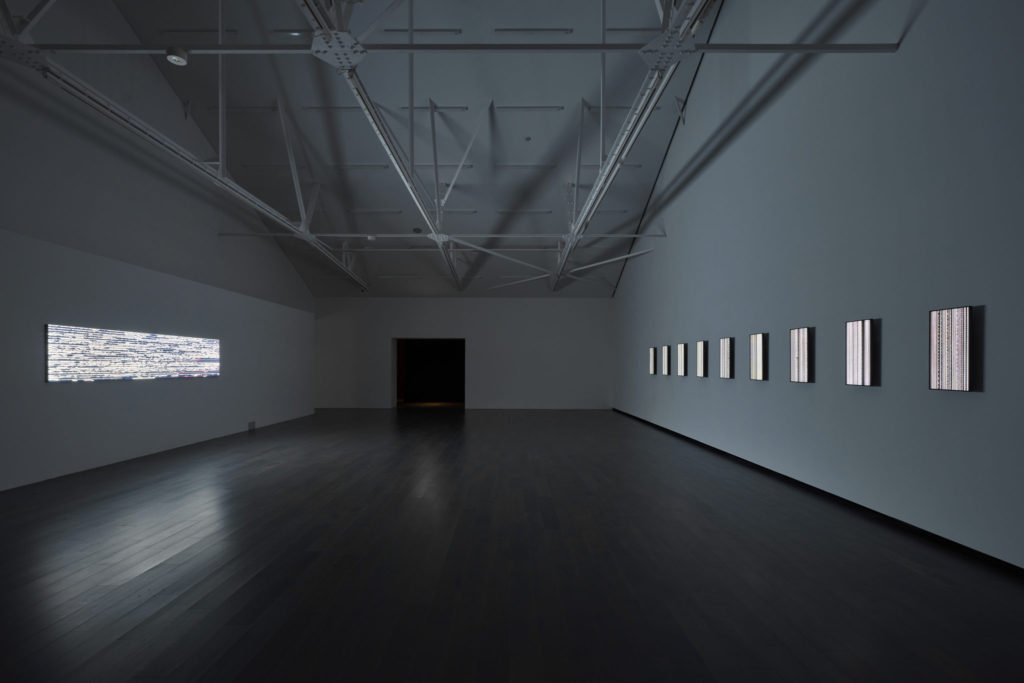 Turning to the last room, Gallery 4, one finds data.scape [DNA], a work from the museum’s own collection, and data.scan [n°1b]-[n°9b], set opposite each other in a space with white walls—something unusual for this museum. The act of looking closely at both works, which resemble archives of motifs that appear frequently in Ikeda’s art, and examining how elaborate a process has been employed to create each part, made for a wonderful coda to the exhibition.

At the exhibition’s press conference, Ikeda said he hoped that “people view this exhibition as if they were going to hear a concert.” I had seen many of the works on display in photographs or videos before, but actually visiting the exhibition space made for an experience that could never be conveyed through reproductions. Ikeda is famous for rarely appearing in public or giving interviews, but on the occasion of the opening of this exhibition, he both gave a press conference at the preview and, on the first day of the exhibition, participated in a panel discussion with Tane and Fumio Nanjo, Senior Advisor of the Hirosaki MOCA. The statements from Ikeda quoted in this review were made on these occasions. The media exposure is probably due to him wanting to invite as many viewers as possible. Ikeda’s compositions consist of installing sound and images in a space. When in the midst of the vibrations between the arranged objects, the viewer feels as if they are resonating with them as well. Ikeda’s compositions become complete only when the viewer is present, and the experience they bring about is different for each and every one of us.

國崎晋 Susumu Kunisaki
Born in 1963, Kunisaki is a director at Rittor Base. He has also been editor-in-chief of Sound & Recording Magazine, a specialist magazine for sound creators, for 20 years, and since 2010 has organized Premium Studio Live, a live recording event, all while operating a label for sharing these event recordings in a high-res format. He established the multi-use studio Rittor Base in 2018, actively engaging in innovative undertakings including “Touch that Sound!,” a sound installation exhibition that featured Sony’s Sonic Surf VR spatial acoustics technology, and a livestreaming event for binaural sound. Since 2021, he also serves as a non-executive director on the board of InterFM897 Co. Ltd.
View all articles by this contributor