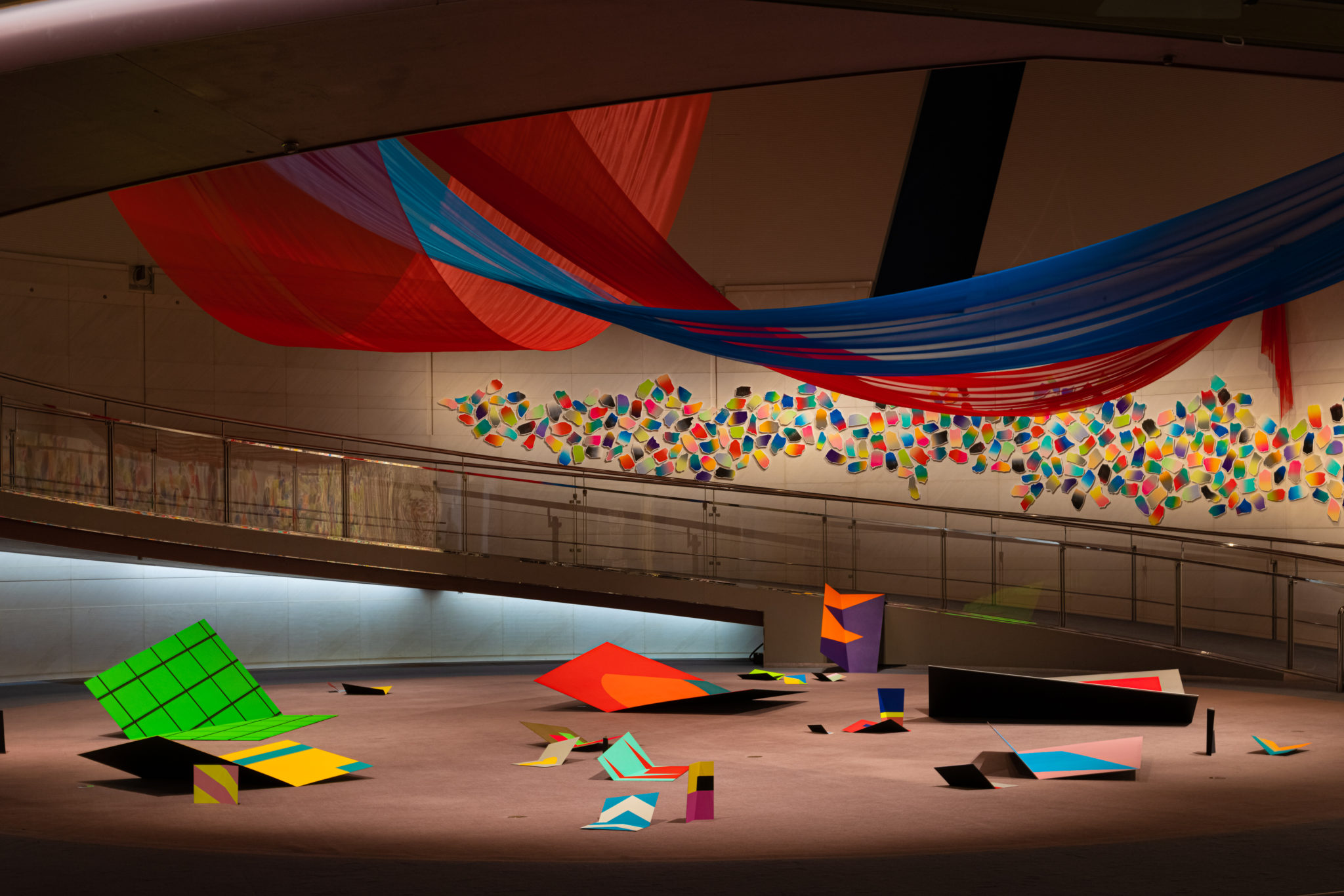 Held at Spiral in Omotesando, “SPREAD by SPREAD: What colors for tomorrow?” was an exhibition by the creative unit SPREAD, who use color as a medium to design entire environments through the use of graphical visuals and a landscape-like perspective. The exhibition’s concept was “Color is Joy!”; a theme that may sound simple but is in truth rather challenging.

Most exhibitions readily allow the viewer to put their opinions and impressions of the works on display into words, as in “This is a superb exhibit” or “That was nice.” But when it comes to joy, things change. It’s easy to spot someone else being joyful, but finding out whether oneself is really feeling joy, I think, requires confronting one’s own, surprisingly subliminal, body. 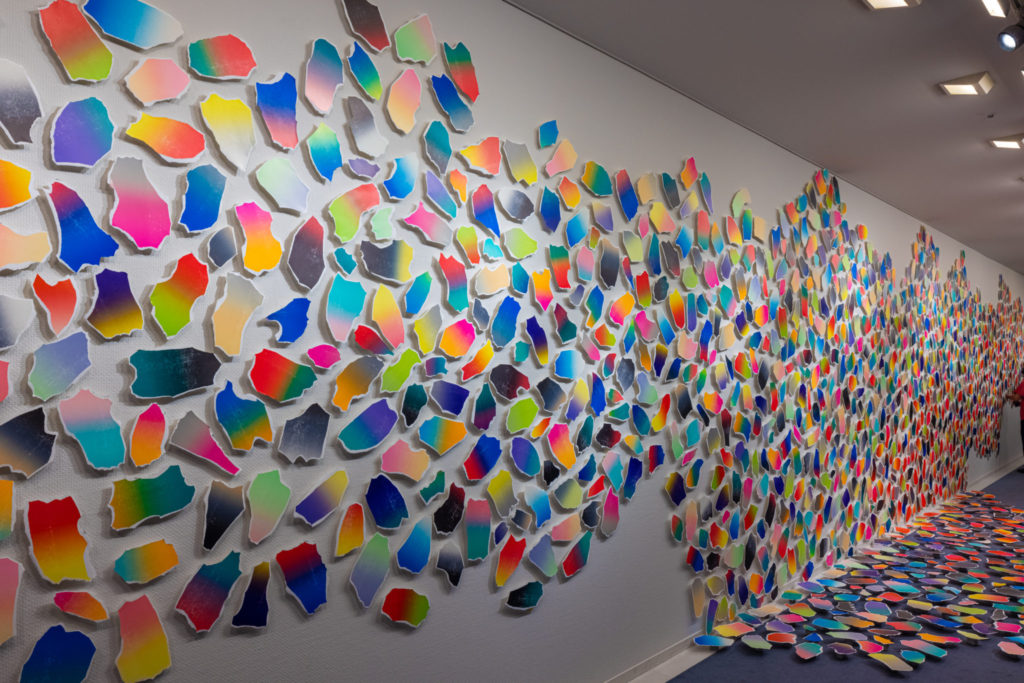 SPREAD Much Peace, Love and Joy

With Much Peace, Love and Joy, the largest artwork at the exhibition and one that extended throughout the gallery, the artists’ commitment to high-grade printing and materials paid off in the form of a piece that made the space sparkle with highly vivid gradations of color. This radiantly colorful environment was best enjoyed by pursuing a sensation of physically basking in the colors, rather than simply looking at them. Instead of viewing the colors as artworks outside of yourself, you feel them as they make up the surrounding environment and envelop your body. Giving in to that sort of sensation allows you to bathe in the colors and feel your body delighting in them. To me, joy is a state in which the body responds to comfort and pleasure in an extremely subjective manner. Color is recognized as something exceptionally visual, but when its vividness and scale exceed a certain range, you get the sudden feeling of your entire body being bathed in color and feeling joy. I think Much Peace, Love and Joy is an artwork capable of bringing about such physical delight.

I’ve related my impressions of the concept of colors and bodily joy, but this exhibition did not limit its treatment of colors to environments in which the body delights. Some of the artworks on display stimulated enjoyment of the pleasures of color inside the viewer’s brain, as I’ll discuss below. 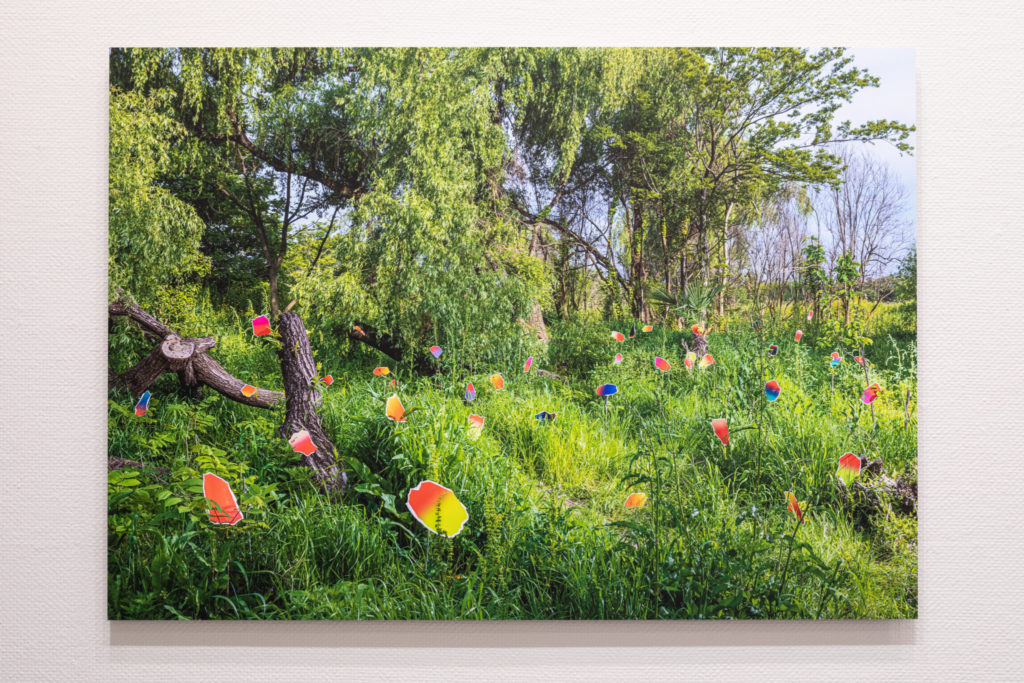 The exhibition included a certain landscape photograph. It depicted a field of thick grass and thriving weeds, over which bits from Much Peace, Love and Joy had been collaged. It looked like the photo had been digitally manipulated to make the vivid strips of color stand out from the background of green grass, but this piece had in fact not been edited: I was later made aware of how the slivers had been physically placed in the sunny field before taking the photo. (I did not notice this myself, but the artist enlightened me.)

I had a “Huh?” moment, or that feeling when your brain doubts what your eyes are seeing. Vivid colors coming straight at me, escaping the photograph despite being trapped on a flat surface. What’s this, analog 3D in my head? Those bits of vivid gradations sure pack a punch! 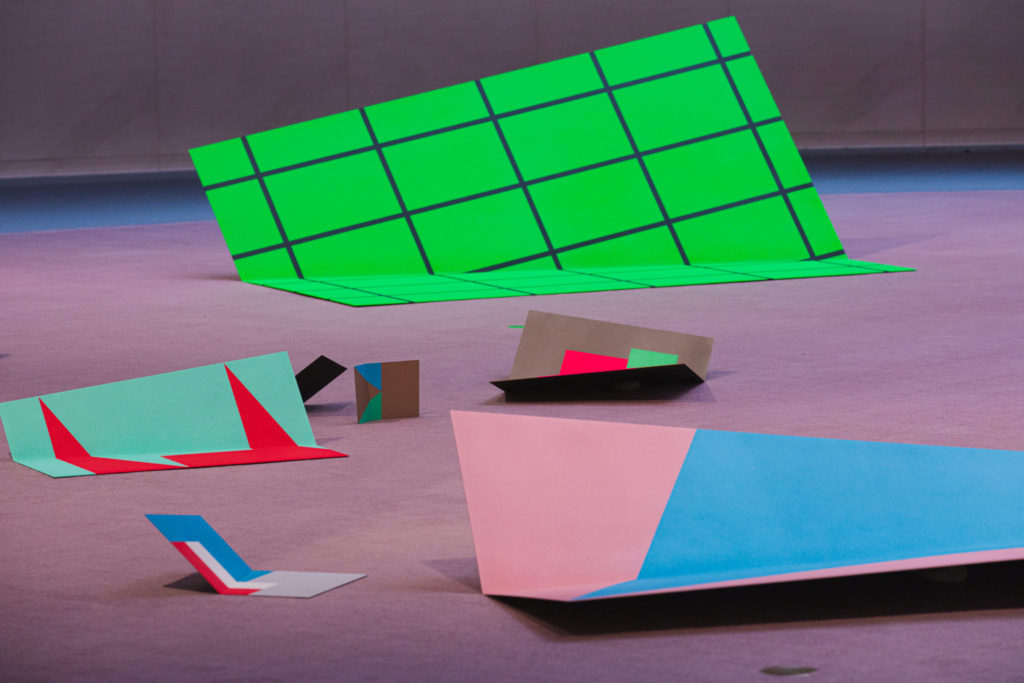 The artwork entitled Ornamental Contrast went beyond errors of spatial cognition enclosed in photographs, causing the same sort of errors in the real world. In this piece, very thin metal sheets are bent once to achieve an effect that makes them appear to exist in between the three-dimensional and two-dimensional worlds. Vivid colors are painted all the way to the flat edges of the sheets, from where they seem to jump out into the surrounding space. This creates a distortion of the spatial sense of depth, as if the colors were floating before the metal elements. I keep using this formulation, but it appears that intense colors that exceed a certain range possess the ability to overcome one’s sense of perspective, jumping out in front of one’s eyes. 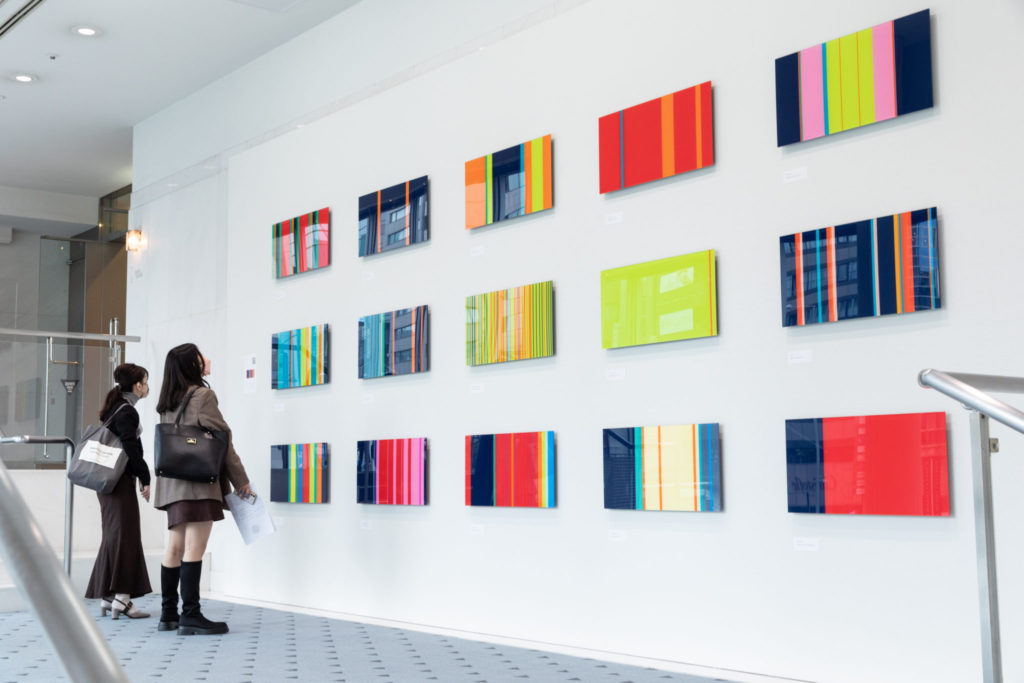 The excitement-filled journey through the gallery space at Spiral eventually led to the final artwork of the exhibition: Life Stripe, which is SPREAD’s life work. This piece uses vivid colors (classified into 21 categories according to human patterns of behavior) to express people’s memories and to describe their world. 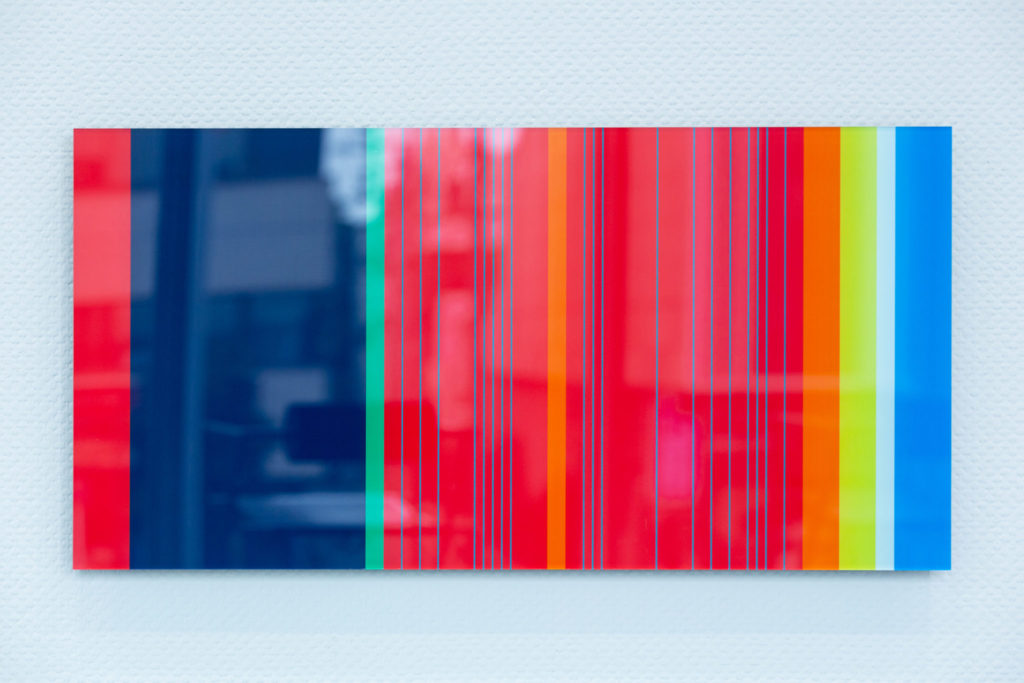 The artwork consists of panels with beautiful, seemingly random stripe patterns. It challenges the viewer to mentally convert its colors, each one corresponding to a certain behavior, into a description of one day in the life of someone else. Reading these signifiers properly takes a little getting used to, but it’s addictive once you get a hang of it. Life Stripe employs the day (a concept likely shared by all living things on our planet, not only humans) as its temporal yardstick, so the viewer can compare the patterns of behavior described with their own while living vicariously through someone else. The fact that checking the 21 colors of the striped patterns against their respective behavioral patterns takes time and effort also makes the exercise seem like a ritual necessary for immersing oneself into the world of the artwork (meaning someone else’s daily life). 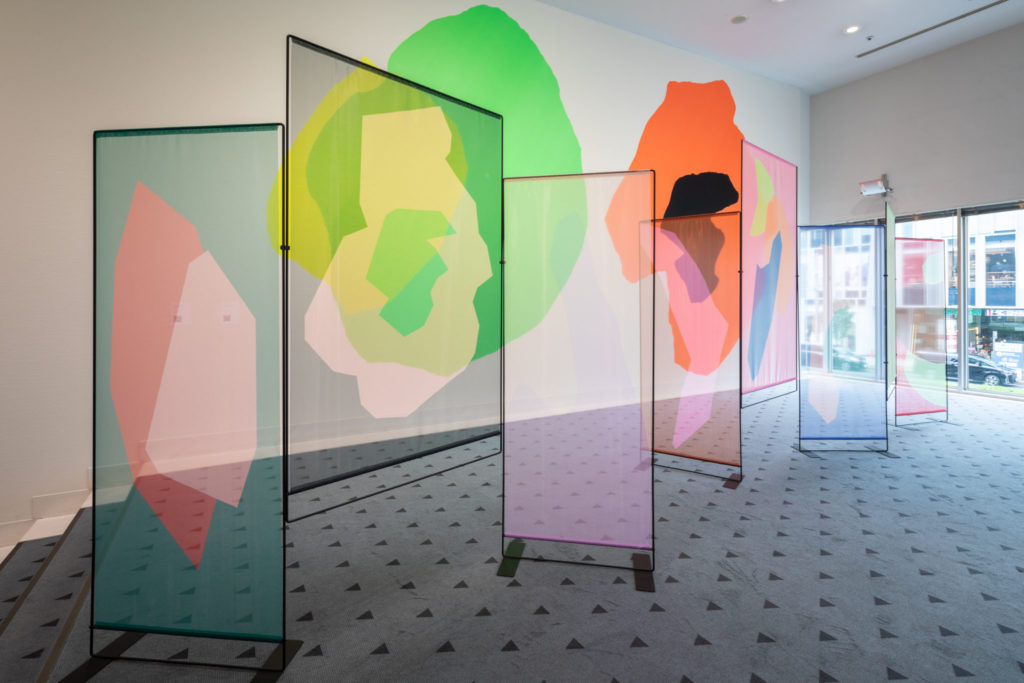 SPREAD’s exhibition employed vivid color as its overarching method, and successfully led the viewer to experience the ambiguous but intense feeling of joy. And by traveling back and forth between physical comfort and conversions of mental cognition, that joy served to expand the limits of the world we sense and feel.

Born in Tokyo in 1970, Ben Nagaoka earned his Master’s in Media and Governance from Keio University. After working for the architectural firm Yamashita Sekkei, he established POINT in 1999. In addition to designing structures and objects, his activities include being a co-founder of Co-lab, a coworking space for creatives. He has also been part of VUILD since April 2020, and holds part-time lecturer positions at Keio University and Musashino Art University.