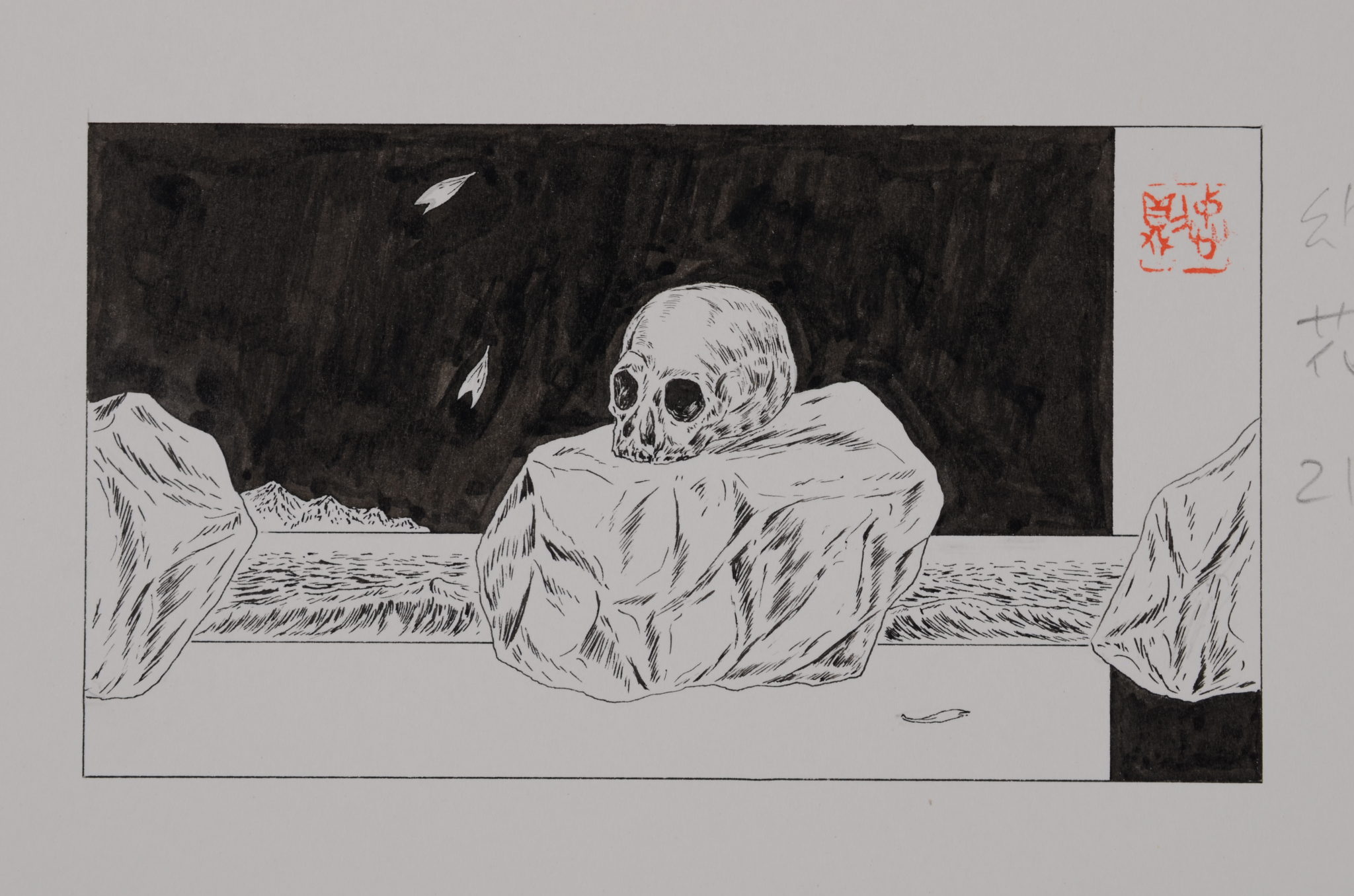 Copying the universe itself

TheTadanori Yokoo Exhibition reportedly attracted more than 12,000 visitors. While this number alone is already quite intimidating, the exhibition itself was an even more marvelous affair.

Jakucho Setouchi’s novel Genga that was serially published in the Tokyo Shimbun newspaper tells the story of the Ashikaga family and related individuals in the Muromachi period. While based on historical facts, the story unfolds in a fantasy world that is entirely the product of Setouchi’s own imagination. Presented in this exhibition were original illustrations that Yokoo made for this series over a period of more than a year. 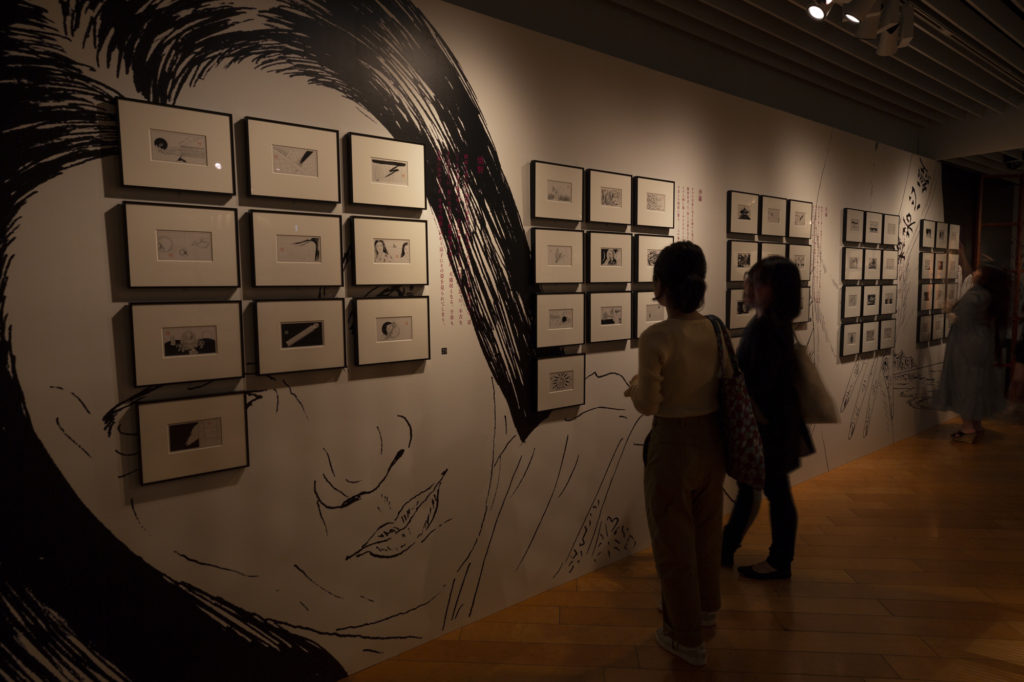 The exhibition spaces on the two floors of the ggg gallery were arranged like mazes, in which a total of 371 small, 8x14cm sized drawings were arranged in 3-5 rows in the style of secret documents, illuminated by little spotlights. The works were surrounded by mats that kept the individual pictures from being interfered, allowing the visitor to fix on every single item undisturbed and from close range. Many of the drawings feature typical Muromachi era motifs from the realms of aristocratic culture and Buddhism, but there was in fact much more than that. Here the drawing vocabulary of Yokoo’s world explodes in a kaleidoscopic fashion. 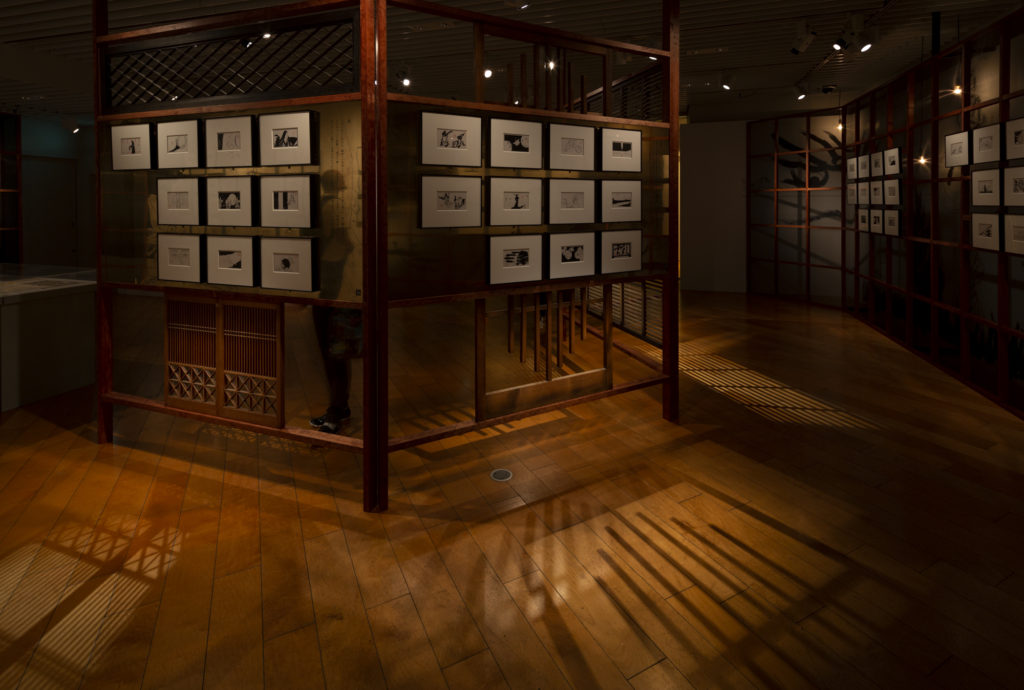 There were a variety of highlights in this exhibition. In the 1970s, Yokoo had already developed a strong interest in the spiritual world, and began to travel to India on a regular basis, which he also continued during the time he made these serial illustrations. Before leaving, he even finished illustrations for the as-yet unfinished novel, which, as Setouchi recalls, contained everything from UFOs to sceneries and events seen in a state of meditation. Yokoo’s drawing vocabulary further expanded to incorporate outer space, minerals, animals and plants, and views of life and death.

Yu Hayashi, curator at the Yokoo Tadanori Museum of Contemporary Art, identifies in the exhibition catalogue the habit of “copying” from anything ranging from old Japanese books and picture scrolls to movie stills and global art history as the origin of Yokoo’s artistic work, and Midori Wakakuwa, whose essay was included in the catalogue of the “TADANORI YOKOO: All Things in the Universe” exhibition at the Museum of Contemporary Art Tokyo in 2002, refers to ”intertextuality” as the fundamental principle behind Yokoo’s creative style. While these are indeed valuable theories for a satisfying interpretation of his work as a painter, even before the time of his so-called ”painter declaration” it was the act of “copying” from the universe, natural phenomena, biology and ecology, to various art historical occurrences that formed the basis of Yokoo’s art. His manifestation of the “visible world” is in a way a practice of drawing a cosmography, and all of this he applied in his illustrations for this period novel. 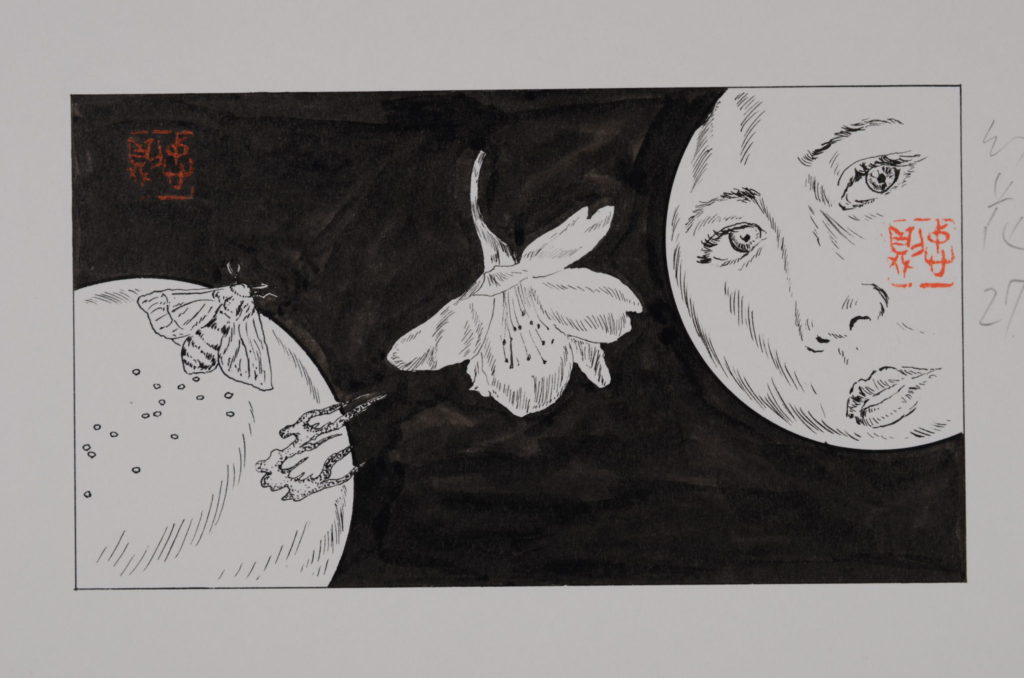 The question that remains is how he acquired all those objects to be “copied” in an age 40 years prior to today’s network society. When looking at the enormous amounts of books and pictures piled up in Yokoo’s atelier, it is easy to imagine the artist amidst a treasury of printed information. The depiction of the ”Duel at Ganryujima” that he drew at the age of five, is another work that he copied from a picture book in which it was originally printed.

Born 1947 in Tokyo. Graduated from Musashino Art University, College of Art and Design. Creative director and producer. Director of Atamatote International, visiting professor at the Graduate School of the Kyoto University of Art & Design, and director/secretary of the Japan inter-design forum. Publications include Art Virus, Urbanart Memorial, Super Calligraphy by Ryoichi Enomoto, and Tokyo Monsterland. Enomoto has been producing the ”Nippon Graphic,” “Objet TOKYO” and “URBANART” exhibitions between 1980 and 1999. He was a member of the emblems selection committee for the Tokyo 2020 Olympic and Paralympic Games. The exhibition “Enomoto Ryoichi Kokaiki” was held at Ginza Graphic Gallery in 2016.