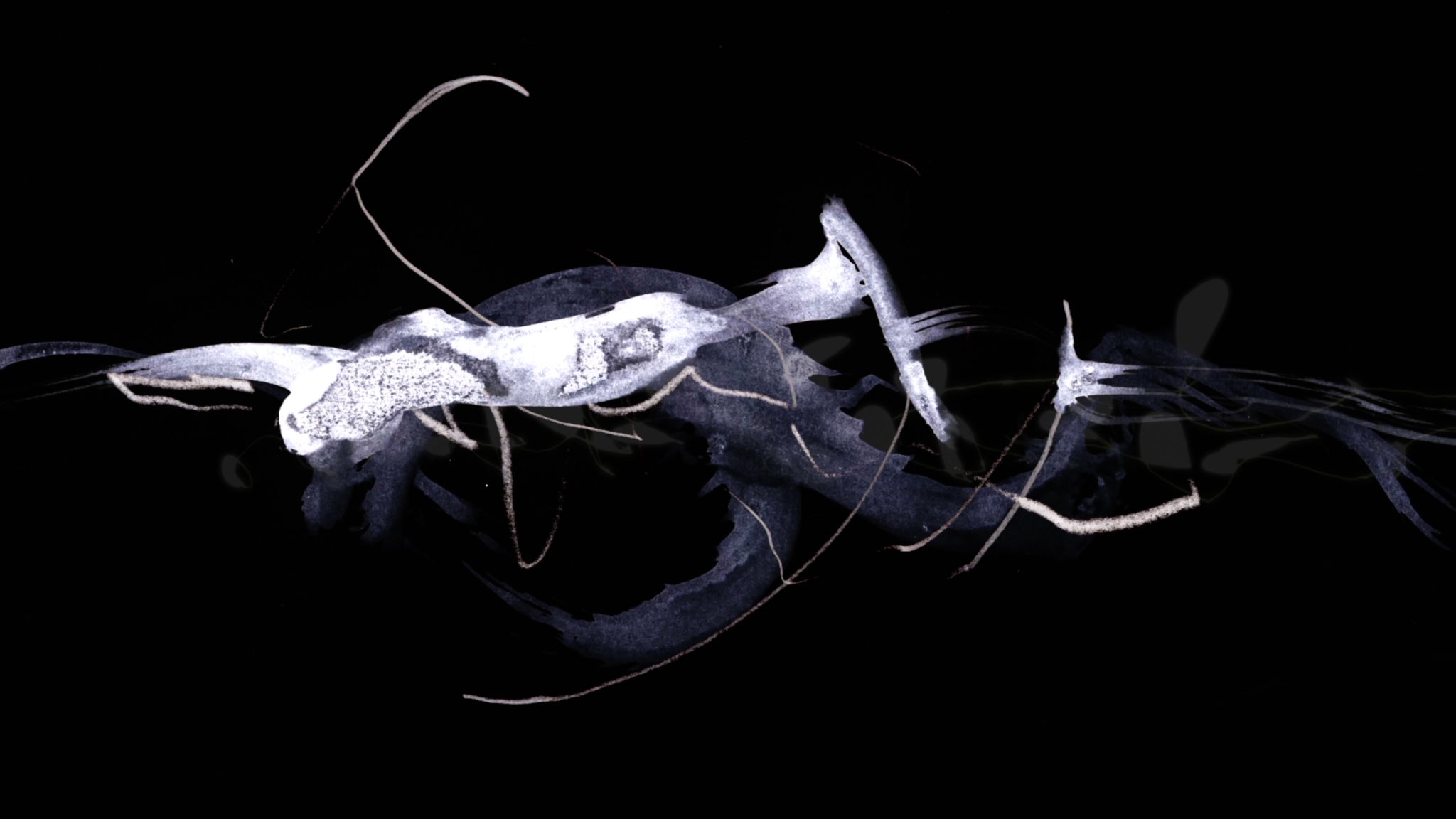 Held at MEM as part of a local program in connection with the Yebisu International Festival for Art & Alternative Visions 2019, Tatsuhiro Ariyoshi’s exhibition “to elephant time” revolved around a new animation work with the same title.

The most noteworthy quality of Ariyoshi’s animations is that particular feeling I would call “coldness” that wells up from the drawn lines. They make the viewer sense the presence of something on a scale that exceeds that of human (warm-hearted) intent. The screening of “to elephant time” as part of the exhibition was an occasion that embodied this very potential of Ariyoshi’s lines in an ideal way.

Looking back at the artist’s work up to date, it seems that Ariyoshi has undergone some transformation from the “storytelling” animations from his Musashino Art University days, via the “metamorphosing” works made while studying at the Tokyo University of the Arts’ graduate school, to his recent works involving “rupture and destruction.” The general direction of these works can be described as very “animation-like” in a way – depicting movements charged with a sense of vitality, projecting the inner workings of individual human beings, or being otherwise based on “human” and “organic” qualities (regardless of that superficial coldness that is always there).

What the viewer gets to see in ”to elephant time” are inorganic lines. There is no such thing as “illusory life” in the lines that continuously appear on the screen. They just keep moving around unrelated to each other, but never connect to form something like a specific organic body.The disconnected images that appear one after another without ever representing anything concrete, are reminiscent of works involving drawn elements in the realm of experimental film – ”Love Songs” and other “paintings on film” by Stan Brakhage, for example – much rather than animation. In such works, there is no assumed connection whatsoever between the drawings/paintings on each frame to those on the respective preceding or subsequent ones. As a result, even though there is movement, it doesn’t produce any receivable meaning.

It’s almost like a secret private language that only the speaking person understands, or some ancient or alien language that we have no way of deciphering; like a murmur, words that are uttered and left alone. Manifested on the screen are sceneries somewhere between life and non-life, that seem to be coincidentally discovered by those watching. It’s such unfathomable something that is depicted also in ”to elephant time.”

While the first half of the work unfurls in images that one can only describe as “a bunch of lines moving around,” things take a different turn in the latter part. The initially fine lines gradually grow thicker, and transform into increasingly concrete shapes. Now there are blue elements in what was all black and white up to that point, and the hand-drawn lines show a morphing kind of behavior that one associates with motion graphics. And then, the work suddenly ends…

About that ending that seems all too abrupt, the artist explained in a talk session during the exhibition period that he “suddenly felt as if something had turned around.” Now what could that “something” be? The lines in this work move in ways that suggests a “space exploration” kind of action, and the “elephant” in the title probably refers to some kind of connection to something large and far away from us. “To elephant time” is a work that functions like some kind of tool for entering as yet uncharted territory beyond the realm of (organic) human life, and capturing traces of something we have never seen before, in images for us to look at.

Nobuaki Doi (1981, Tokyo) has worked as a curator, researcher, and critic in the field of animation. Since 2015, he has been working as Festival Director for New Chitose Airport International Animation Festival, the only animation festival held inside a terminal building of an airport. He founded a distribution company New Deer and published two books on animation: Personal Harmony: Yuri Norstein and the Aesthetic of Contemporary Animation (Film Art Sha, 2016) and Introduction to the Animation in the 21st Century. (Film Art Sha, 2017).