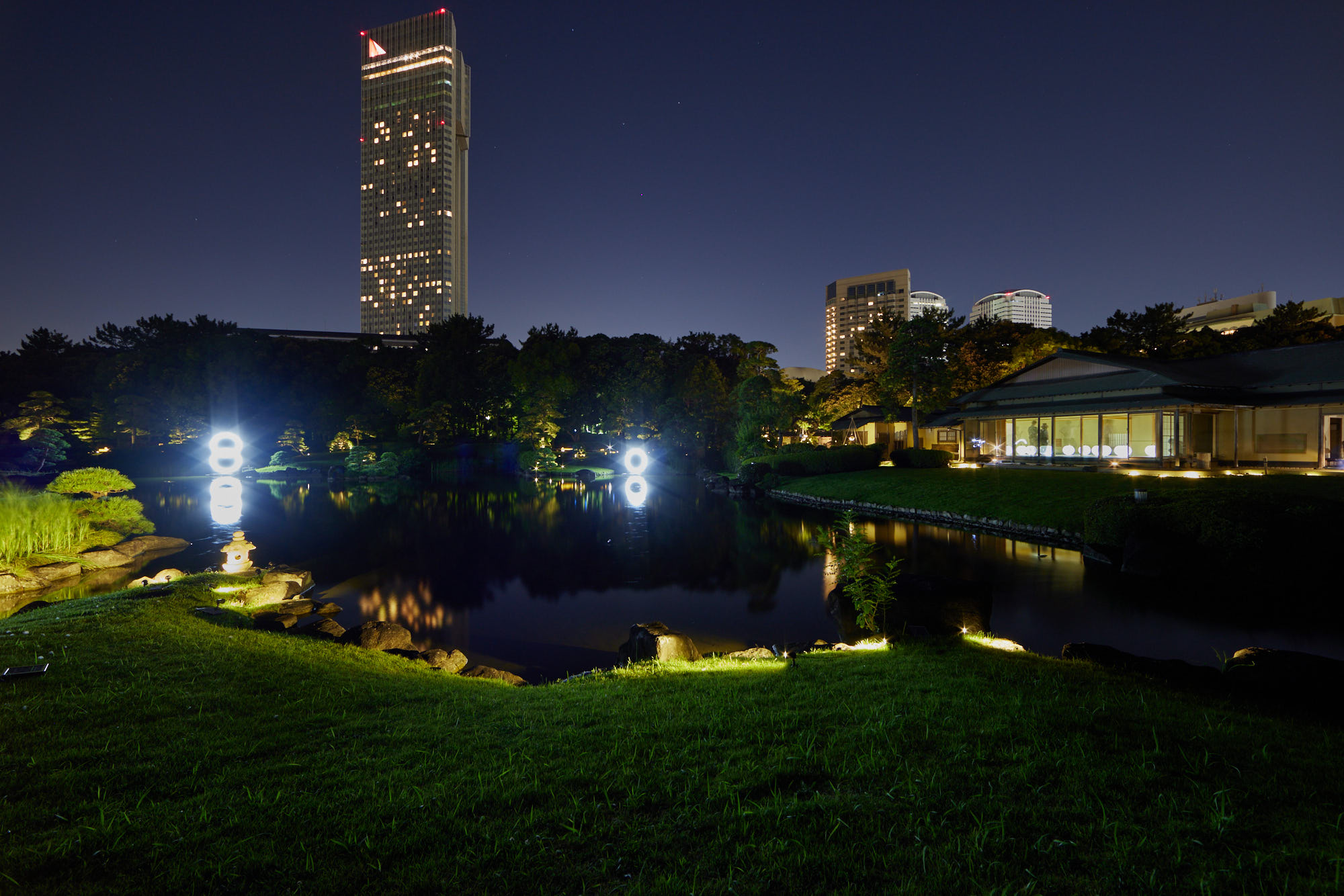 “Jack into the Noösphere,” a showcase of contemporary art that starts at dusk, is on until August 8 at Mihama-en, a Japanese garden in Makuhari, Chiba. The 16 artworks on display, created by a diverse lineup of participants that includes not only artists but researchers, a sci-fi writers’ collective, filmmakers, and architects, are themed on society, nature, technology, and other aspects of our everyday environment.

A single path connecting the entrance and exit of the 1.6-hectare garden is lined with artworks that can be enjoyed one by one while strolling through the greenery. The placement of the works emulates the process of the tea ceremony, progressing from an outer garden (sotoroji) to an inner garden (uchiroji), on into a teahouse, and toward the exit.

In the outer garden, intended to cleanse visitors of the taint of the outside world, the first artwork is “Sotoroji #1” by The TEA-ROOM. This two-dimensional portrayal of a gate is themed on the distortions of capitalism; approaching it, one notices that the image consists of countless QR codes, which when scanned connect to depictions of people victimized by capitalism and information on how to alleviate their plight. 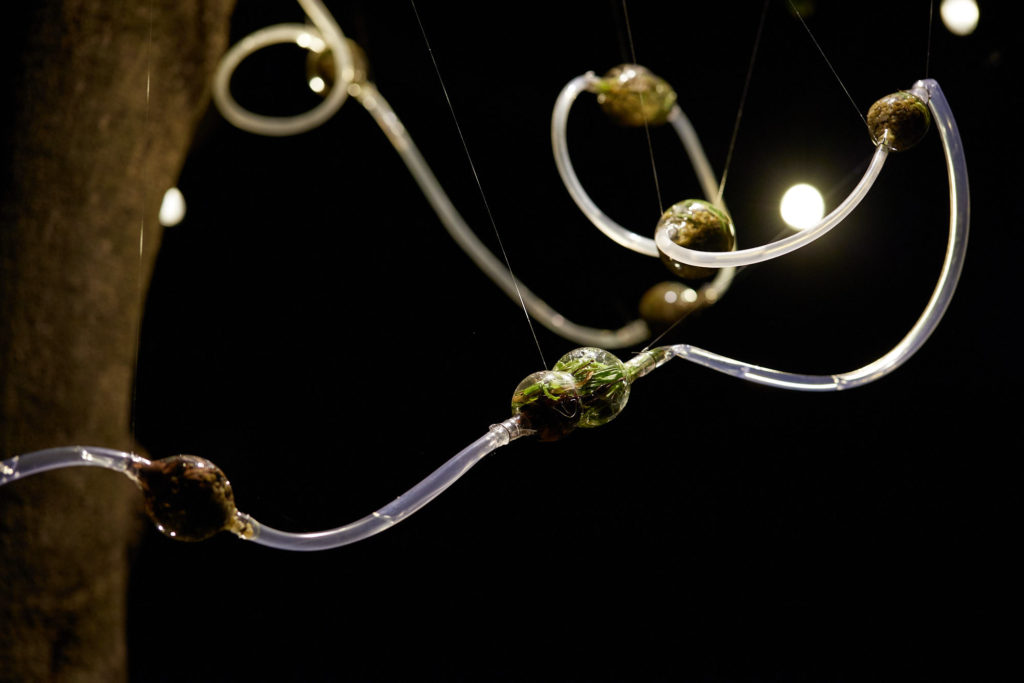 The next three pieces touch on the relationship between humanity and nature, with a new work by Hanna Saito particularly representative of the exhibition as a whole. Water from a stream in the garden is drawn into a glass tube stuffed with pebbles, sand, and dead leaves collected nearby. As the water passes through the tube on its way back into the steam, it may be purified and become clearer, or perhaps it picks up bacteria and impurities instead. While the end result is unknown, this piece brings to light how humans inevitably impact nature.

Next up are an “anthropocene” sculpture made from natural materials such as akadama clay and rice hulls and created with a specialized 3D printer by the Hiroya Tanaka Lab and METACITY, and three platns by Dorita Takido equipped with artificial muscles and robotics technology that appears to move of its own volition. 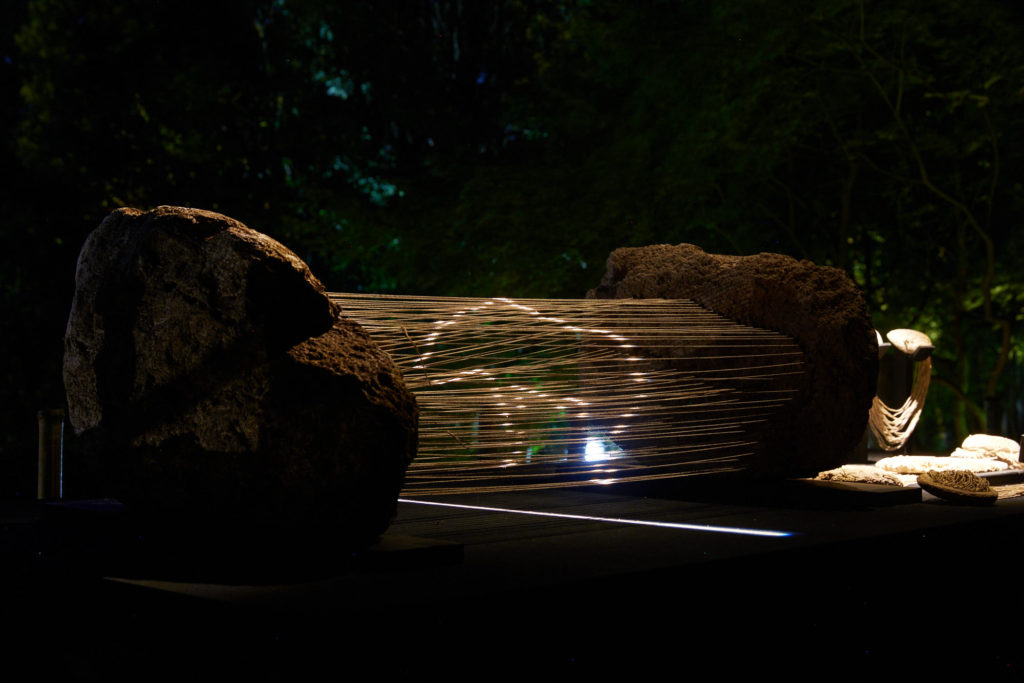 The middle part of the outer garden features works themed on techniques of expression developed by humanity ever since distant antiquity. A form of animation that could have been invented in the Old Stone Age is realized here with cutting-edge technology by Akinori Goto, while another work by Masaya Ishikawa showcases a brand-new optics-based form of expression that is currently being patented.

An artwork by Katsuki Nogami features fleeting digital photos of the artist himself projected onto stones placed in the pond, while Dead Channel JP contribute a fictional account of the imaginary city of Makuhari (the name of an area stretching across Hanamigawa and Mihama wards in the city of Chiba, but not a city in itself), written on material that preserves the text even if buried in the ground for a thousand years. 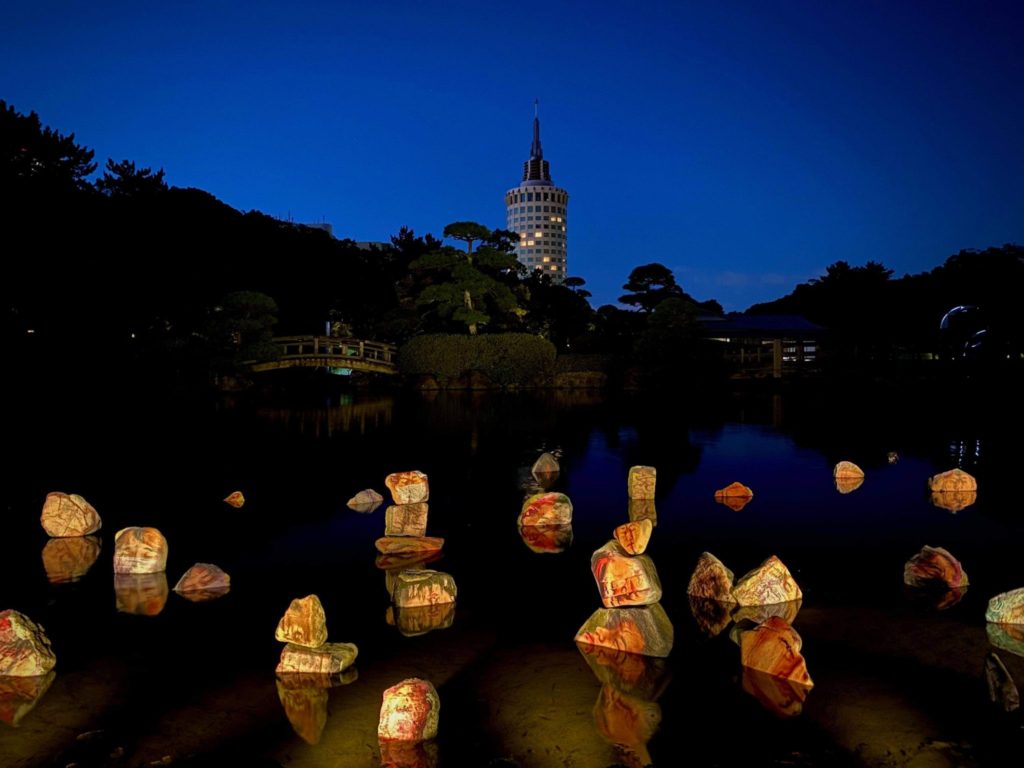 Masahide Matsuda’s artwork, floating in the garden’s central pond and emitting a mysterious glow, is rich in irony. Themed on sounds evoked by the landscape, it consists of three LED sculptures in which two and a half rings are reflected on the water’s surface, making it appear as if five rings were sinking. Meanwhile, cemetery architect Ran Sekino uses a ritualistic process to give shape to a new form of funeral. The final artwork in the outer garden is a sonic one. In the garden, you hear birdsong, the buzzing of insects, and the fluttering of leaves. ALTERNATIVE MACHINE has analyzed these ambient sounds and added artificial sounds to the vacant frequency bands. Listen to the artwork for a while and you will notice how the synthetic sounds, paired with light, start interacting with the ambient sounds of nature. 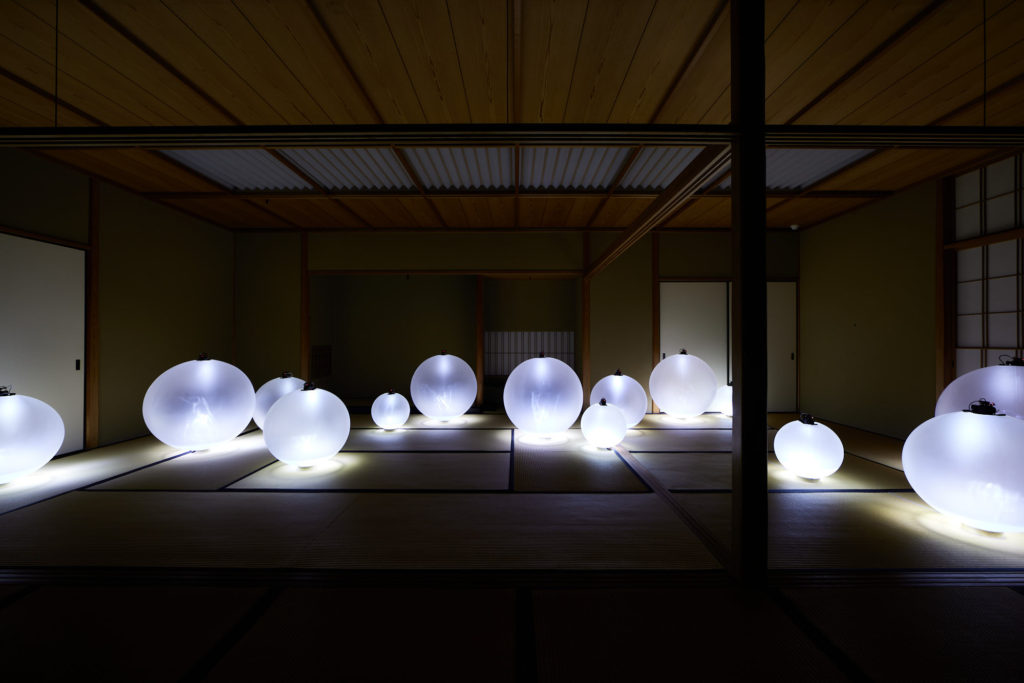 The exhibition comes to a climax at the Shorai-tei teahouse, the pride of the garden, built in the sukiya-zukuri style. The artworks displayed in its vicinity appear to encourage reincarnation and a cleansing of the spirit, and upon stepping foot into the teahouse itself, visitors come across a work of sound and light by Ray Kunimoto as beautiful and peaceful as paradise itself. But something different entirely awaits in the next room, where Kenta Tanaka has let an artificial intelligence create an artwork with landscapes and sounds that do not exist anywhere on Earth. While utopian, it also gives off a hellishly eerie vibe.

The exhibition fuses the graceful with the ominous, the calm and harmonious with the chaotic, and ends with a work that leaves the most lasting impression of them all. 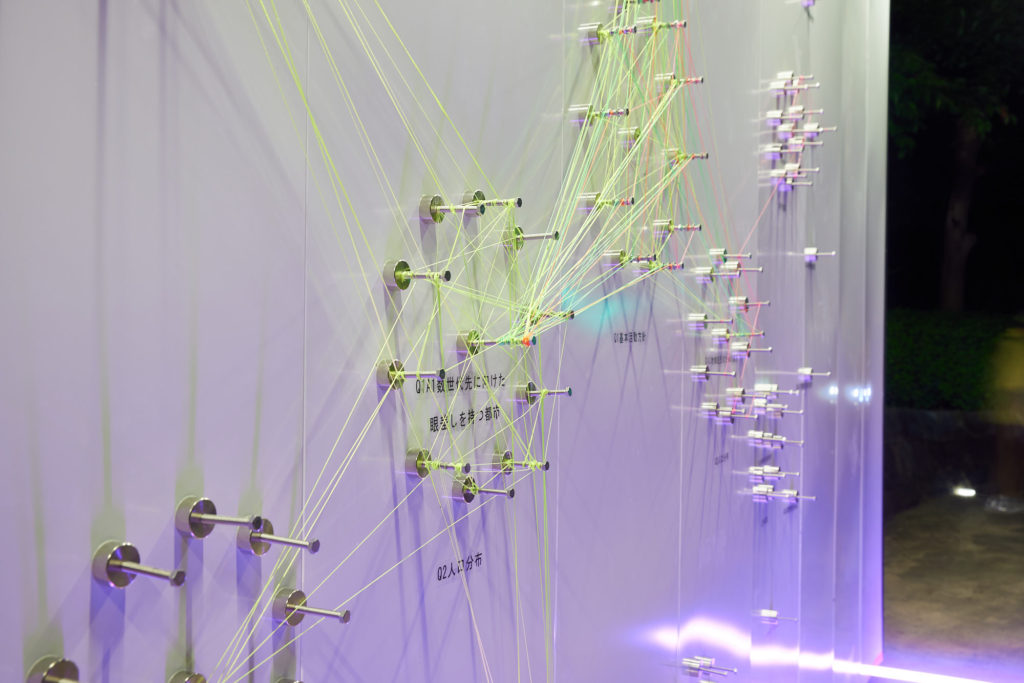 That piece, “New Rousseau Machine” by METACITY, raises questions about the nature of democracy. There are many different systems for expressing the will of the people, including direct and representative democracy. The artwork uses chains of threads to express how the same decision taken by a people can lead to completely different urban development outcomes depending on the type of democratic system employed. The artwork’s concept was developed and its system designed by Yasushi Sakai, a city science researcher at the MIT Media Lab whose areas of study include consensus-building in groups, and his fellow residents and architects of METACITY. Upon realizing that only a fine line separates even the most fundamental frameworks of our society from fiction, since these frameworks can be altered dramatically by changing only a single rule, the visitor is thrown out from the garden into the darkness of Makuhari with its rows of manmade buildings.

The term “Jack in” in the exhibition’s title refers to the act of connecting one’s mind into cyberspace, as described in American author William Gibson’s legendary sci-fi novel Neuromancer, which starts with a scene where a character gazes into the sky above Chiba. The exhibition captures how what people create shape their environment, and is particularly interesting when viewed as a whole. Mihama ward, where the venue is located, occupies artificial land reclaimed by human hands. The Japanese garden built on this land is a synthetic reconstruction of nature. Human-made art is displayed within it along conceptual lines provided by the tea ceremony, and all this is topped with a Neuromancer metaphor. This interplay of artificial layer on top of artificial layer makes the exhibition itself somewhat akin to a piece of conceptual art.

While many local art festivals seek to uncover the history of their place, the artificial and ahistorical character of Makuhari is precisely what makes “Jack into the Noösphere” special.

Consultant and journalist Nobi Hayashi has been reporting on the latest in digital technology since 1990, covering the popularization of computers and the internet and how digitalization has altered the way we work and live. Having come to the realization that technology alone cannot bring about abundance, Hayashi’s reporting, writing, consulting, event planning, and business development work now crisscrosses disciplines including technology, design, art, fashion, and education, with a focus on the values that ought to be preserved into the 22nd century. He has written several books and is a visiting professor at the Kanazawa College of Art. Hayashi also holds a directorship at the James Dyson Foundation and is an outside director at Revolver Inc and a member of the Good Design Award jury.