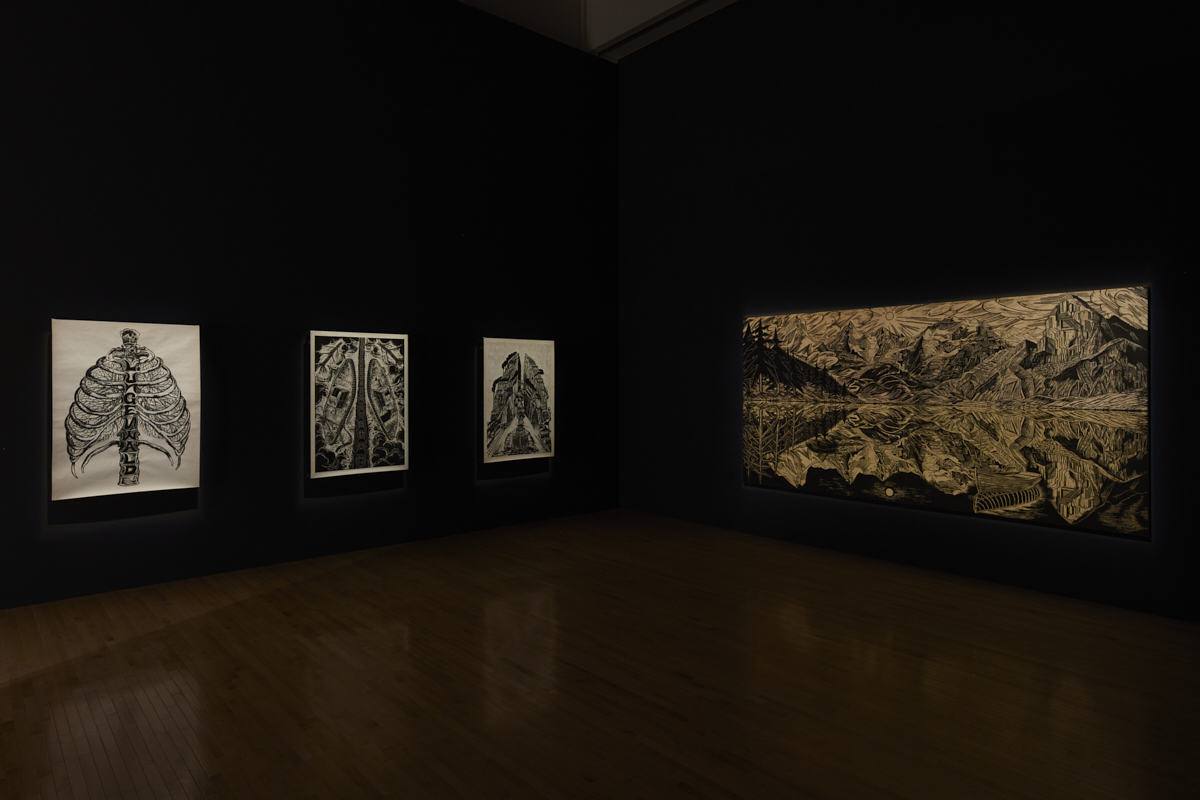 Their respective modes of travel – Sachiko Kazama and Motoyuki Shitamichi

In the world of contemporary art, it’s easy for newcomers to attract attention. Words like “young” and “up-and-coming” are catchy, and new names tend to get picked up by the media and critics as well as by curators. Rookies tend to explode onto the scene, and it’s only natural that people are attracted to completely new forms of expression. But I’m not sure how many of these artists are able to go on to have consistent careers.

Mid-career artists, on the other hand, have it hard. They don’t attract as much attention as newcomers, and even if they are able to make a name for themselves through participation in topical exhibitions and international events such as biennales, this does not always translate to higher prices for their works. When it comes to conceptual forms of expression and video art, just being able to sell your work can be a challenge. Considering that Japan does not have the kind of European-style safety net that offers perks such as affordable housing to artists, many of them are put in a difficult situation when faced with the financial demands of having a family and children, in the form of issues such as lack of time and funding for their creative activities.

As the mechanisms for supporting artists in the long term are on the whole insufficient in Japanese society, the Tokyo Contemporary Art Award (TCAA) is an extremely valuable initiative. Open to mid-career artists, this groundbreaking program offers not only ¥3 million in prize money but also backing for undertaking artistic activities overseas, an opportunity to exhibit one’s work, and support for monograph production over several years. Selected as its first winners when the TCAA was established in 2018, Sachiko Kazama and Motoyuki Shitamichi were beneficiaries of the grant from 2019 to 2021, and an exhibition featuring their work was held at the Museum of Contemporary Art Tokyo. In his winner’s interview, Shitamichi, who creates his works through a variety of interactions over periods of three to five years, says that “mid-career artists get fewer opportunities than up-and-comers,” and relates how reassuring it has been to receive long-term support(*1) . I hope the award will continue to provide backing for outstanding mid-career artists from here on.

The winners’ exhibition is notable for how differently it presents Shitamichi’s and Kazama’s art. The first half, consisting of Shitamichi’s works, features bookshelves, display cases, and tables lined up neatly in an expansive space, with frames and monitors set up on the walls in an orderly manner. Kazama’s space, on the other hand, is distinguished by a dense atmosphere brought about by the artist’s woodblock prints, each one packed with vast amounts of information. These two spaces – one in which visitors can relive Shitamichi’s encounters and discoveries, another that draws them into Kazama’s world of imagination (or fantasies?) – bring about an appetizing contrast. 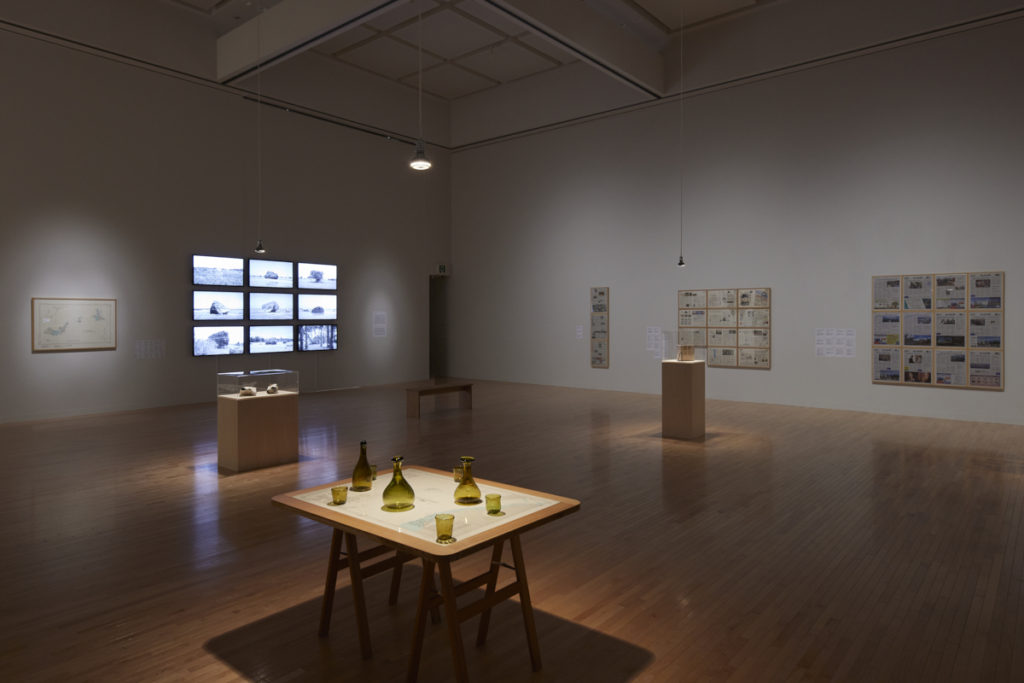 Some of Shitamichi’s most famous works include “Remnants” (2001-2005), which features photos of abandoned wartime hangars and gun batteries across Japan, and “torii” (2006-2012, 2017-), composed of contemporary images of torii gates built in China, Taiwan, and other countries in East Asia that were part of Japan’s colonial empire. This exhibition, however, does not include those works in the main exhibition space (though 10 photos from the “Remnants” series are displayed in the last room, where they represent Shitamichi’s early career); instead, it’s impressive in its focus on works created by the artist together with other people. For example, displayed near the entrance is “Setouchi “                ” Archive” (2019-), an ongoing project by Shitamichi at Benesse Art Site Naoshima that involves collecting, surveying, and exhibiting, together with the people of Naoshima, materials related to the landscape and history of the Setouchi region. For this exhibition, Shitamichi brought materials and equipment over from Naoshima to recreate his archive within a museum. The work is far from flashy, conveying a spirit of amateurism through items such as photo books by a photographer whose subject is the Setouchi landscape, the handwritten menu of a lunchbox shop, and an islander’s scrapbook with newspaper articles on Naoshima. Rooted in the present, the place that is Naoshima, and its very people, the work is representative of Shitamichi’s efforts to employ several eyes and hands in order to pull the past closer to the present. 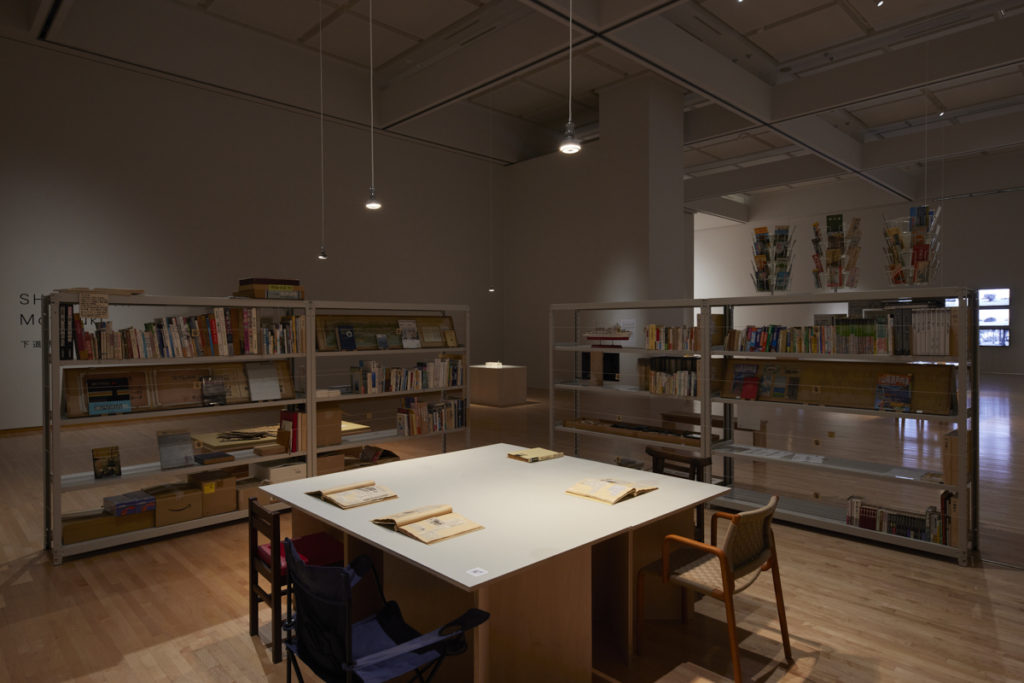 The most interesting series here is “14 years old & the world & border” (2013-) – the result of Shitamichi visiting schools in various countries and giving a special class to 14-year-olds, or second-graders in junior high school, who he asks to think about “borderlines” they come across in everyday life. The project involves publishing the students’ writing on their own borderlines in local newspapers. A Japanese child talks about how a TV screen separates the viewers from those being viewed, a child from Hong Kong mentions a cactus that’s dangerous to touch, and a Korean child focuses on how mirrors make you aware of your appearance. Their words then appear casually, in corners, on the pages of the Sanyo Shimbun, Ming Pao, and Kwangju Ilbo. It feels like these students and Shitamichi have co-conspired to stage mini-hijackings of the newspapers – a thrilling and fun endeavor. It works as a record of these 14-year-olds, no longer children but not quite adults, as well as a statement to the world. 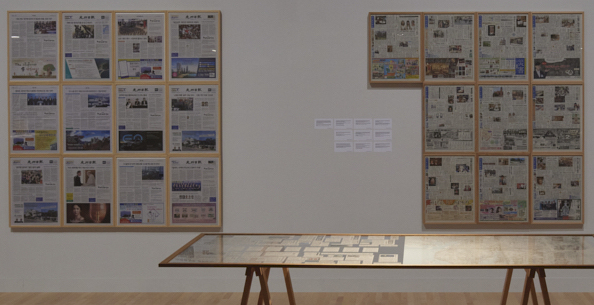 While Shitamichi collaborates with the people of Naoshima and an international bunch of 14-year-olds, Sachiko Kazama focuses entirely on digging deep into herself, unleashing a magma-like energy from within. Before the coronavirus pandemic hit and she had to cancel her travel plans, Kazama had intended to research Nazi ruins and monuments in Germany. Unable to make the trip, she instead (?) decided to read the entirety of Thomas Mann’s The Magic Mountain.

“And since I can’t travel to the outside world for research, I’ll climb The Magic Mountain remotely from the confines of my own room! I’ll travel (by brain) to explore the ‘abyss’ on high!”(*2) 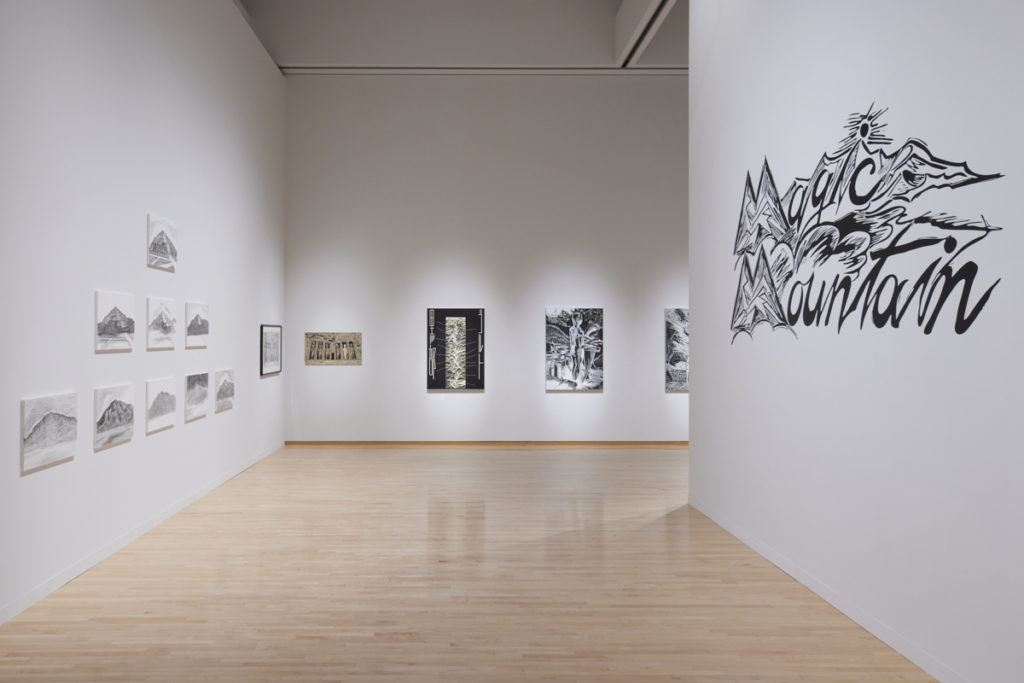 In Mann’s novel, the protagonist Hans Castorp ends up staying at a sanatorium in the Swiss Alps for seven years, during which he comes in contact with a variety of unique patients from different countries. Kazama calls Castorp’s experience a “moratorium” and projects herself into it. Since her third year in elementary school, she had to take breaks from regular school due to her asthma, instead entering a special school for “sickly children.” She was happy to do so, as it gave her the opportunity to distance herself from the group of healthy kids. She says that time for deep thinking and introspection away from everyday life remains essential for her creative process(*3) . Her “Magic Mountain” series, displayed on black walls, evokes the madness lurking in a mountain that once entered cannot be escaped. “Der Lungenwald – LUNGENWALD” (2021) combines shapes of trees with those of a tuberculosis patient’s lungs, relaying how nature is a metaphor for the body and how stories play out inside the brain. For Kazama, perhaps the mountain is not a source of fear, but, however temporarily, a place in which she feels safe. 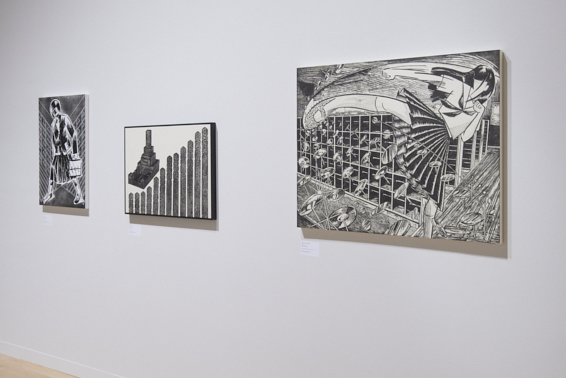 ”Go / Leave” (2016) and “A target dreams of becoming a hunter” (2016) are both impactful pieces that evoke Kazama’s own experiences. The girl in a school uniform, portrayed in a hallway lined with shoe boxes, aptly expresses the pain of going to school and the insidiousness of bullying. But like a superhero, she stands resolutely, facing the countless drawing pins that fly toward her. Kazama’s anger within, her battles, and skeptical outlook on society are eloquently caricatured through the imagery of superhero stories and science fiction, and released in a storm of irony and humor.

Viewing the work of two artists as different from each other as Shitamichi and Kazama side by side was interesting, because it made me appreciate more clearly the motivations that underpin their creativity, their ways of interacting with others, and their ways of seeing the world. What the two have in common, however, is that they are both artists determined to keep traveling. I hope to keep following their respective journeys in the future.