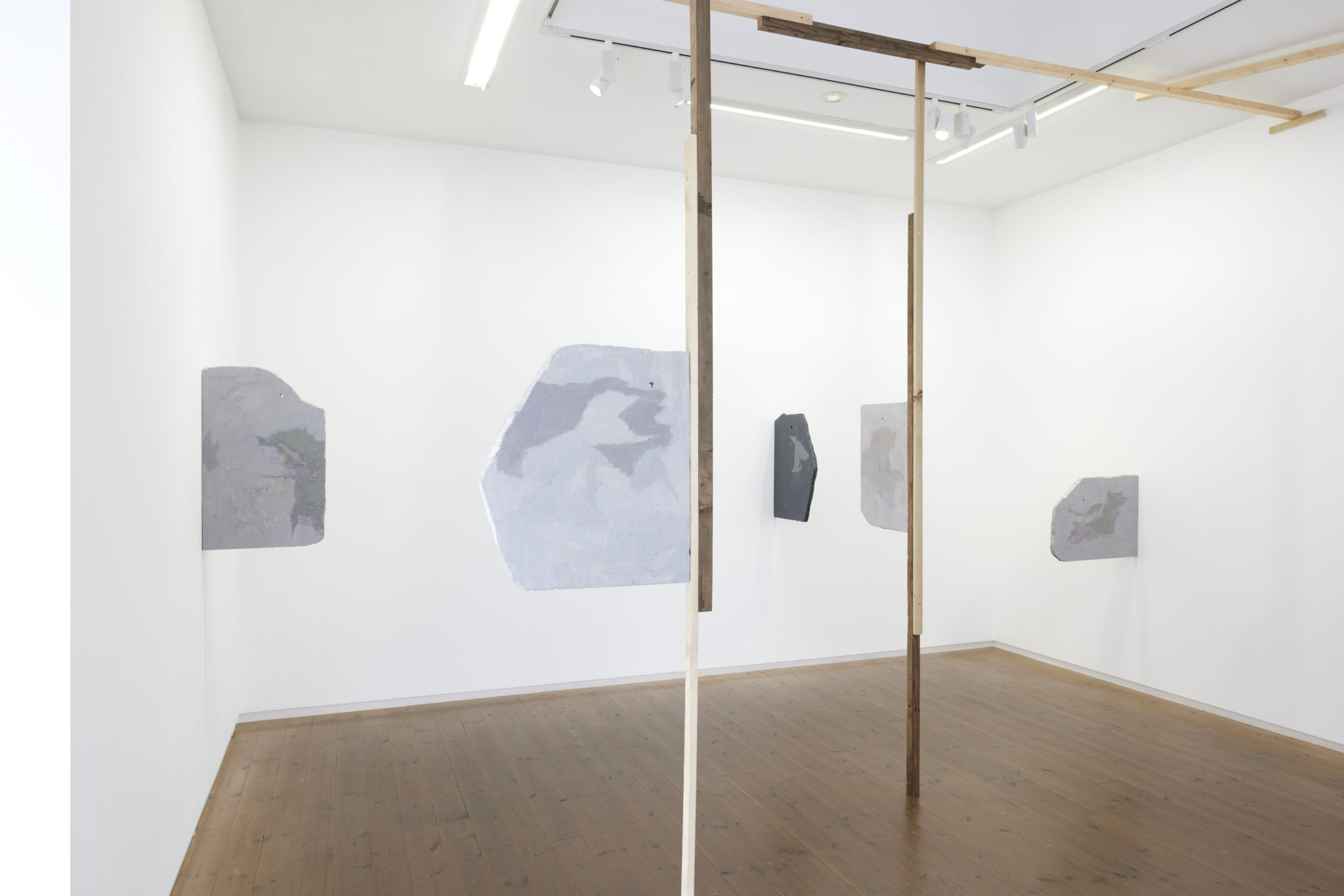 Heihachi Hashimoto collected stones himself and picked out ones that particularly evoked the idea of sen, or “the sense of the sacred hidden in nature, beyond human knowledge.” He then carved likenesses of his stones out of wood – a receptacle of a different sense of the sacred – exquisitely moving their shapes onto another medium while simultaneously seeking to transfer the very power of forming shapes.

In order to actualize and show the sculpting power that accompanies the time of “becoming” and “being,” Giuseppe Penone molded the shapes of stones formed by the flow of a river onto other stones. Alternatively, remember how the artist lies in a stream flowing through a forest in one photo of the performance-like work “Maritime Alps.” (Further of note are the frame-like pieces of wood around him.) And Vija Celmins carefully colored pieces of bronze shaped like stones, making them virtually indistinguishable from actual stones. In the artist’s own words, her 11 creations urge the viewer to “look closely” while representing a return to the roots of the act of sculpting.

Perhaps tracing the shapes of stones and transferring/reproducing their appearances contains some fundamental truth of shaping things or perhaps of art itself. 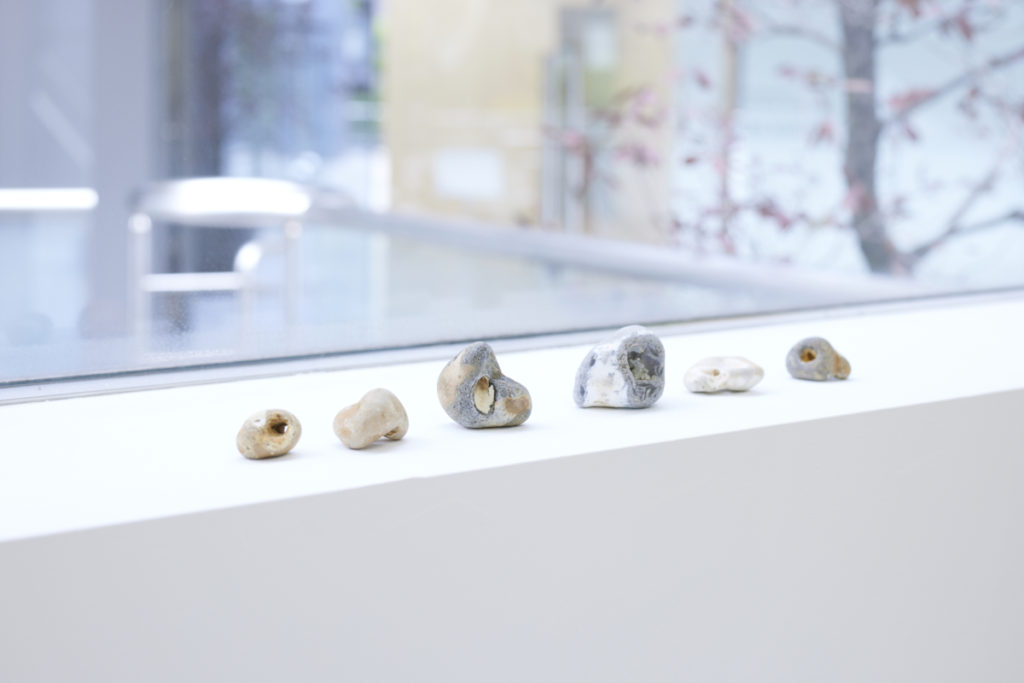 Two kinds of “stones” occupy the small space of a gallery in Roppongi. One is a collection of six pebbles lined up modestly by the gallery’s window. Each pebble has a hole; they were collected by the artist on a beach in the UK. Apparently pebbles with holes like these are common on the beaches of St. Ives in Cornwall. Mention St. Ives and names like Ben Nicholson and Barbara Hepworth immediately spring to mind, and the holed stones are fully sufficient to evoke a sense of affinity with the work of these artists.

The other “stone” might not quite fit the moniker. These stone tablet-like items number six in total – just like the pebbles. Three are attached to the gallery walls and the other three to temporary wooden posts. Each tablet has a hole, too. 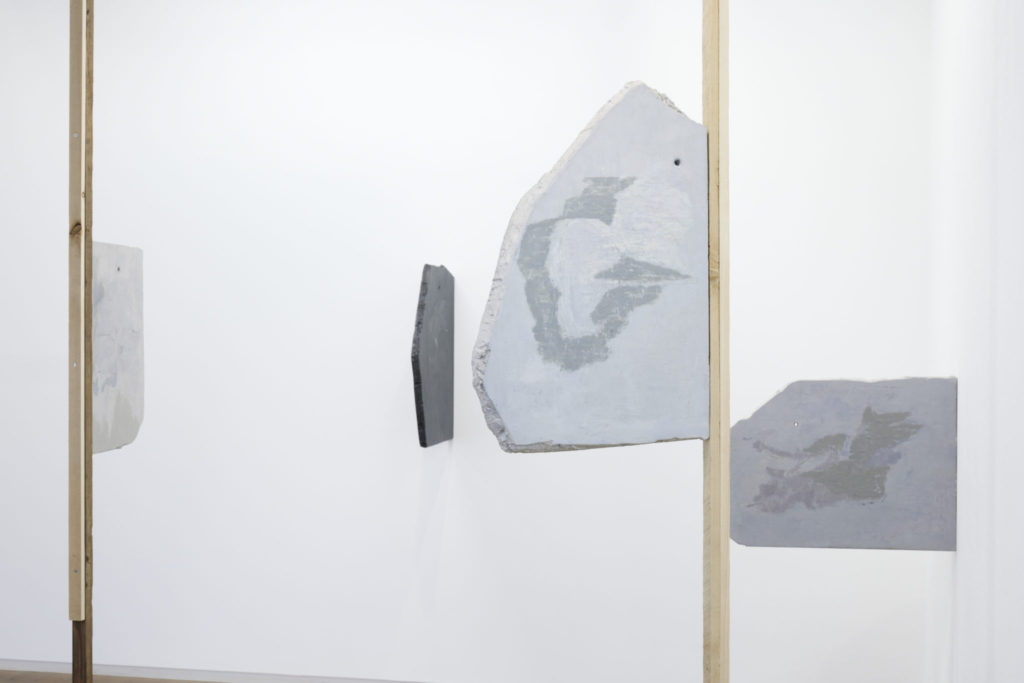 But the tablets are not actually made of stone but of jesmonite, a waterborne resin-based composite material invented in the UK in 1984. They hang vertically with both sides visible – with no inside or outside but with a back, as it were. Both sides are colored with paint, the patterns seemingly imitating those of stone or appearing as if they emerged naturally through the growth of moss. Combined with the holes, they bring to mind landscapes, like the skies and seas of some unnamed island nation. One is reminded of the East Asian tradition of using stones to express scenery. Whatever the case, this use of paint makes the holed tablets something more than mere tablets. 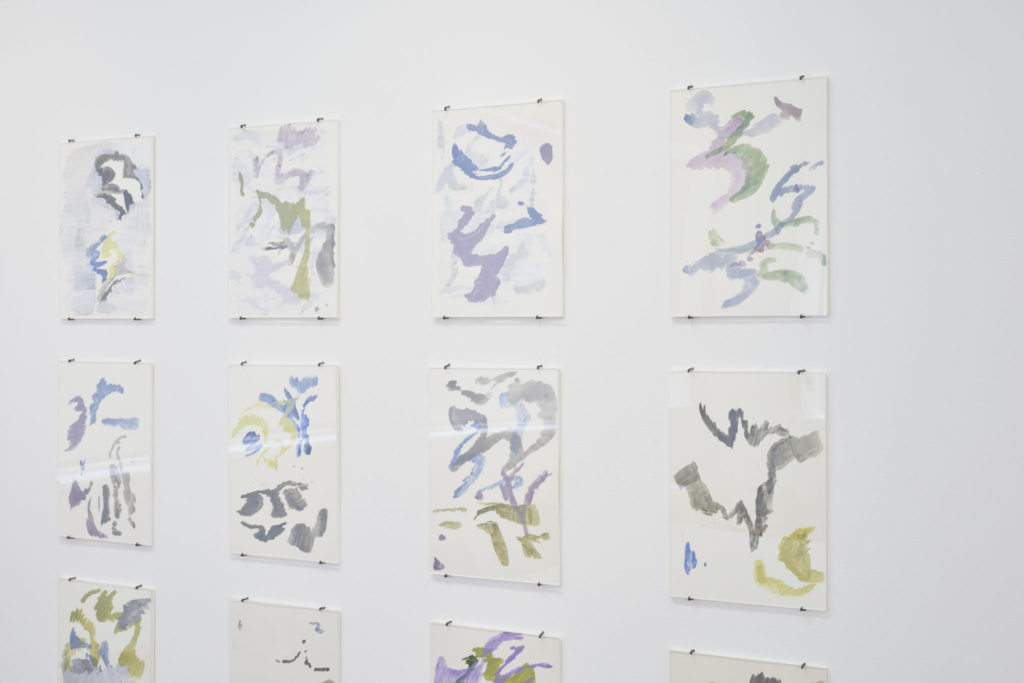 Between the two “stones” is a selection of drawings on the wall. The shapes they express are similar to those painted onto the stone tablets, but the resemblance is not clear. Still, some parts look like written characters (perhaps hiragana?). They seem to be on the move from one “stone” to the other – from symbol to impression.

The beach pebbles from the UK, where the artist has been based for a long time, have holes due to having been washed by the waves for countless years. The colored tablets, on the other hand, also have holes but are flat, irregular, and with backs and bases. This approach is clearly different from that of the three aforementioned artists working with two stones, who seek to make the one resemble the other. Still, there’s a topological connection between the shapes, between the beaches of Britain and Tokyo’s Roppongi – one brought into view by the tunnel-like holes that reveal glimpses of these two extremes. While some of the tablets are attached to walls, others hang on rather flimsy-looking wooden poles. In comparison to the weight of the artwork, these supports are undeniably unstable in a way that evokes grafting. Extending this into a general argument about, say, the shaky foundation from which Japanese people engage with fine art would be far too simplistic. Instead, you could argue that the tablets represent the burl that appears by the joint when grafting two different species of plants together. And if that’s the case, the tablets hanging on the neutral walls of this white cube are, like so many credited works throughout the history of art, understood by their creator as such burl-like entities. That’s likely to be the place the artist is coming from when mentioning names such as Roger Hilton, Prunella Crough, and Hubert Dalwood – hardly well-known artists even in their native UK. These painters have, again, perhaps in distorted ways but with an air of inevitability, produced burls at various nodes. 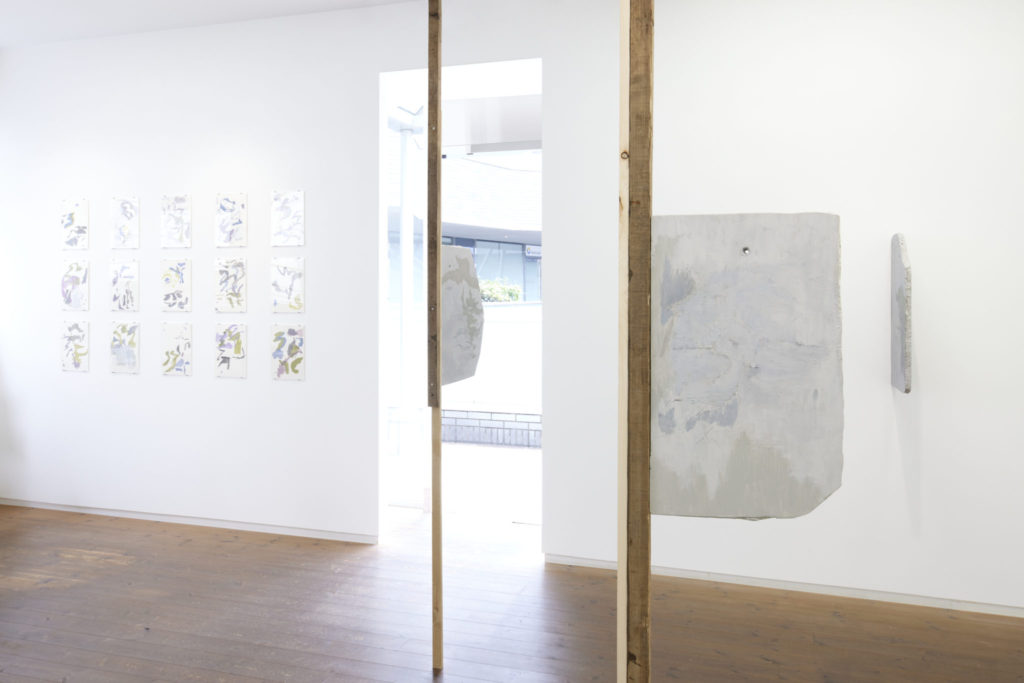 Elements like soil and natural features have a considerable impact on how things are shaped. But at the same time, like a pebble washed up on shore by chance just in time for someone to pick it up – its appearance both the product of a long period of formation and coincidental choice – some things are born and emerge by accident. Exploring how the power of shaping things produces forms – like burls that are byproducts of grafting – in our time of unquestioned mass movement and mass reception, that is regardless whether we’re talking before or after the Covid-19 pandemic, feels like the intentional pursuit of what choices we make and what we take on while building a backbone, to exist, without deciding which side is the front and which the back.