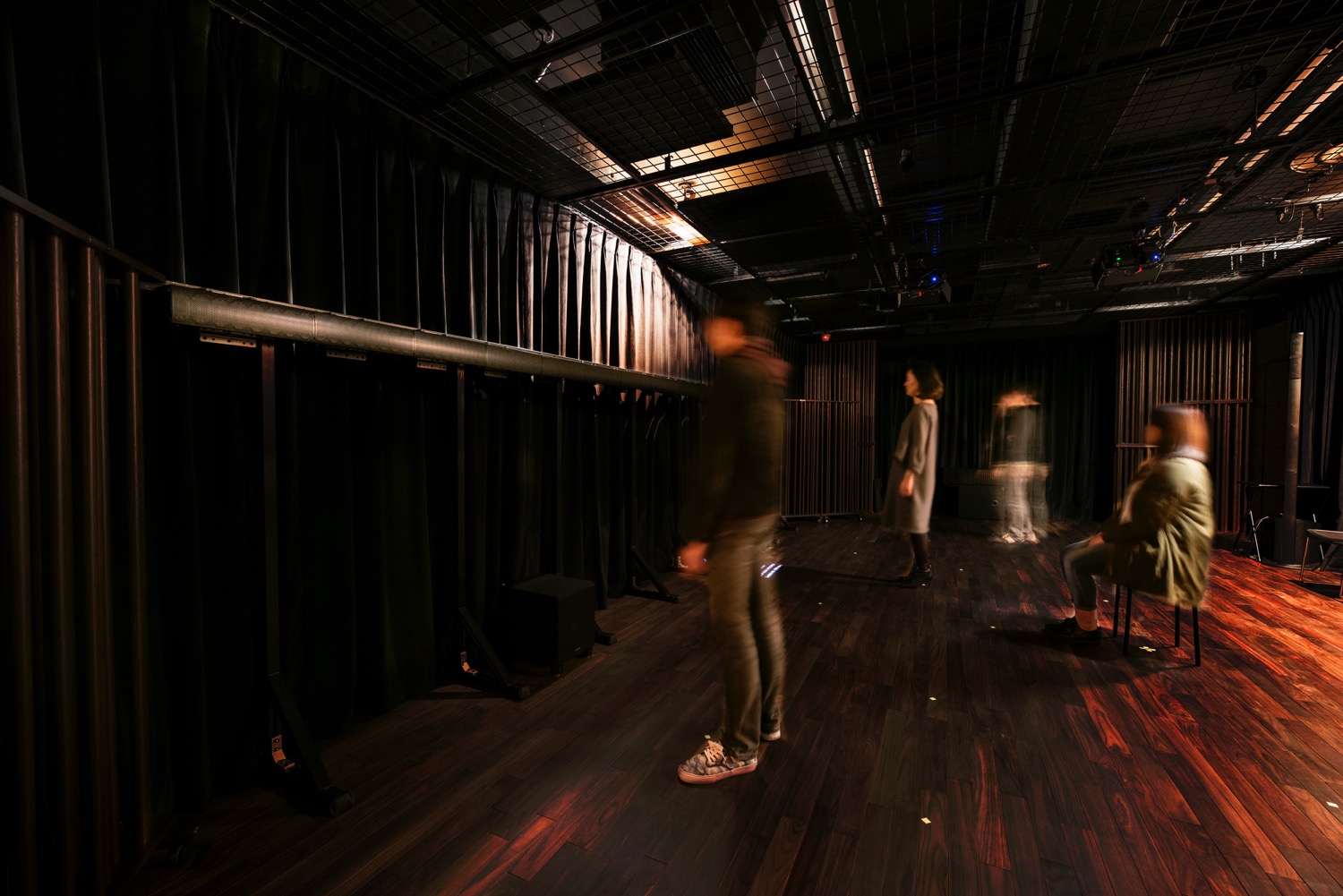 “Touch that Sound!”, a sound installation at the newly opened Rittor Base in Ochanomizu, featured the Sonic Surf VR spatial audio technology playing music by five well-known artists: Masayuki Nakano of Boom Boom Satellites; Cornelius; evala; Hello, Wendy! + zAK; and Yasuaki Shimizu. Developed by Sony, Sonic Surf VR is entirely unlike usual stereophonic sound and multi-channel playback systems. Producing soundscapes by using speakers positioned in a straight horizontal line across a plane surface to achieve sound field synthesis, it is capable of creating an impression of sound coming from behind the listener despite a lack of any rear speakers. While the sounds you hear change depending on where you stand in a room equipped with the system, the soundscape itself remains the same. The feeling is difficult to put into words, but let’s just say that multiple “sweet spots” for listening appear within the same space.

All the featured tracks made good use of these technical characteristics, resulting in an interesting listening experience. The day of my visit also saw a talk by Yasuaki Shimizu, who explained the process behind his contribution. Entitled “Contrapunctus I – SSVR mix –“, its origin is in J. S. Bach’s “The Art of Fugue”, but the piece is built around Shimizu’s saxophone – which, on the artist’s own suggestion, was recorded in the elevator hall of Sony’s headquarters. I’ve only seen it in a photo, but this spacious room and its high ceiling struck a chord with Shimizu, who always pays particular attention to the acoustics of the spaces he performs in. Also incorporating a Una Corda piano and other instruments, Shimizu’s track is not only fascinatingly mixed; it appears to utilize the Sonic Surf VR as an instrument in its own right.

Last year saw the release of an SACD multi-hybrid edition of Miles Davis’s “Bitches Brew”. This quadraphonic-compatible SACD is derived from the original masters of the quadraphonic vinyl edition, and being in charge of the liner notes for this release gave me a chance to listen to the quadraphonic master mix at Sony’s studios. It was an extraordinary listening experience, considering that the technology involved died out long ago, having suffered from software inadequacies and an oversupply of incompatible formats caused by intense developer competition in the 1970s. While 5.1 surround sound in home theatre systems has made immersive soundscapes ordinary these days, the quadraphonic mix of “Bitches Brew” was something different. That’s because it seemed to release the multilayered grooves and sounds into space as they were, in a fuller and more authentic state than in the stereo mix.

While its concept is completely different from that of Sonic Surf VR in that it only offers a single, very specific “sweet spot”, quadraphonic mixing – and the aforementioned version of “Bitches Brew” – disassembled familiar stereo mixing for me and challenged me to reconstruct music in my head once again. What Shimizu’s Sonic Surf VR track, which sounds different depending on where you stand listening to it, shares with quadraphonic sound is that it makes the listener feel involved with how music takes form in unison with the space it is played in. Hearing it convinced me that spatial audio technology in its current form offers ample opportunities for enriching the kinds of listening experiences unlocked by ambient music.

Music critic, producer for the rings label, and director and DJ at dublab.jp, the Japan branch of the LA-based nonprofit online radio station. Interested in matching cities and music in new ways. Author of “Jazz Thing”, a book on “Something called jazz – the sound that jazz has pursued”.