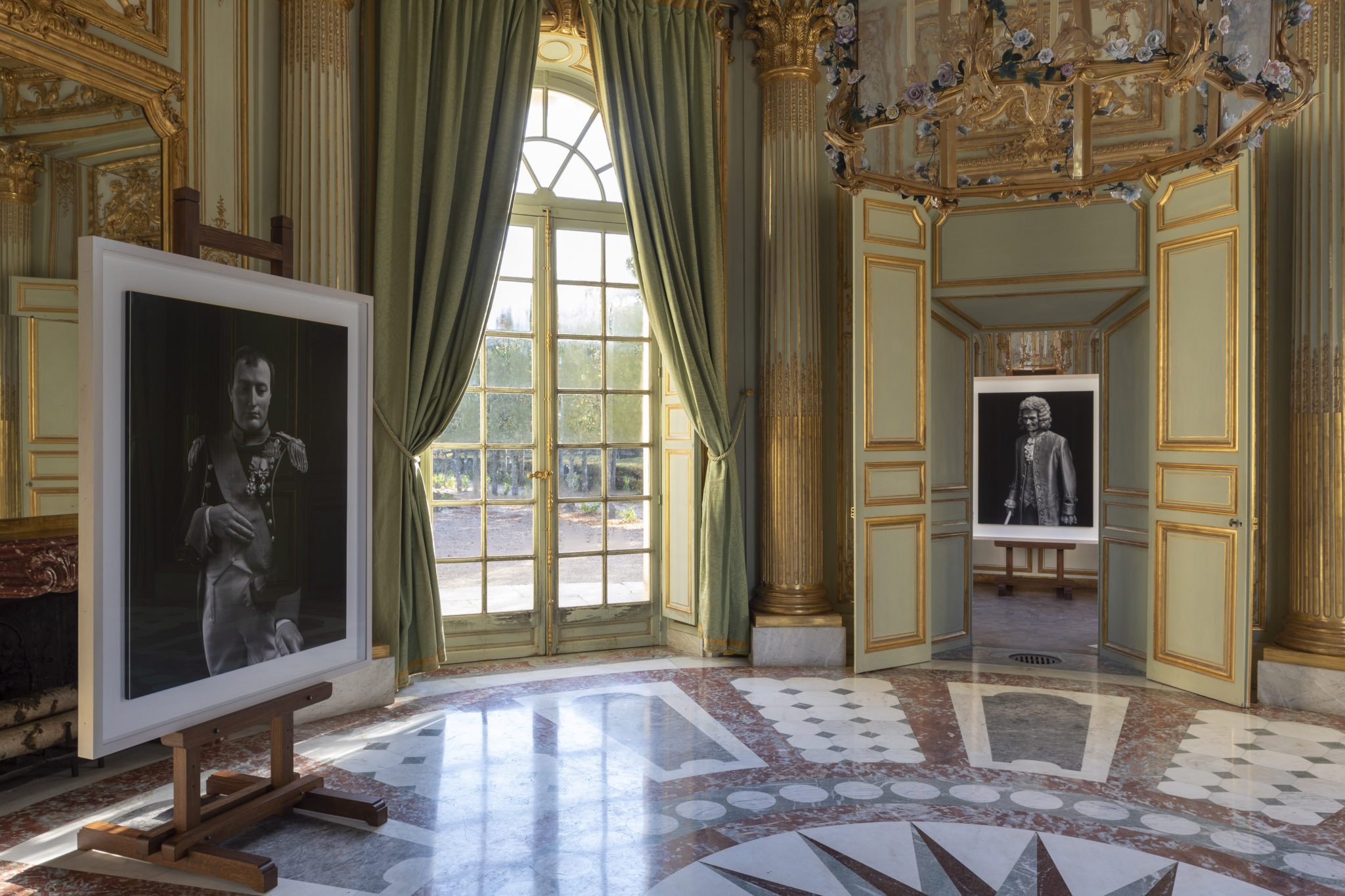 Once every year, the Palace of Versailles in France invites a contemporary artist to exhibit his or her work. The artist chosen this year for the 11th installment of this exhibition series was Hiroshi Sugimoto. On a fresh and sunny autumn day in October, I had the opportunity to ask Sugimoto some questions during a press conference.

Sugimoto did not choose the main palace of Versailles, but he dropped his handkerchief to the estate of Trianon, which was originally commissioned by Louis XIV as a retreat for his mistress, and still retains its small and simple flavor today. When Louis XVI gifted it to Marie Antoinette, an English-style garden was added, and Marie Antoinette eventually used the place for her relaxation in a rustic environment. Considering that “coexistence with nature” has been a central theme in Sugimoto’s work, the Sugimoto-Trianon combination seems to make perfect sense. Sugimoto himself explains his choice as follows.
“As a matter of fact, the idea to focus on the Trianon, which was renovated in recent years, initially came from the organizers. The main palace is indeed so splendid that there is little to add (laughs). Above that, it would probably be hard to see if I did something there, so I didn’t hesitate to go for the Trianon. The idea was to confront something big not with some other big thing, but respond with something small. I wanted to show that small things are good things. (laughs)”

Sugimoto used the Petit Trianon for the display of what he impishly called a “phantom exhibition” of a series of portraits of wax figures.
“The idea stems from my discovery of a certain relationship between Versailles and portraits of wax figures that I’d been making since about 25 years. Madame Tussauds, famous for her wax museum, was a French wax modeler who served at the Palace of Versailles. Just like in the realm of Noh, where the spirits of the dead are summoned on stage to perform a piece, I decided to gather the spirits of all those departed individuals that had once passed through Versailles, in the form of wax figures.”
However in this exhibition, coincidence is another factor that plays an important role. Just when Sugimoto had settled on a concept and began his preparations, he learned from the people at Versailles about the existence of Louis XIV’s life mask that was made in his lifetime. This inspired the creation of a new portrait of Louis XIV as a symbol of Versailles, which was eventually exhibited alongside Sugimoto’s previous portraits of the likes of Queen Elizabeth II, Princess Diana, Emperor Hirohito, Fidel Castro and Salvador Dali. 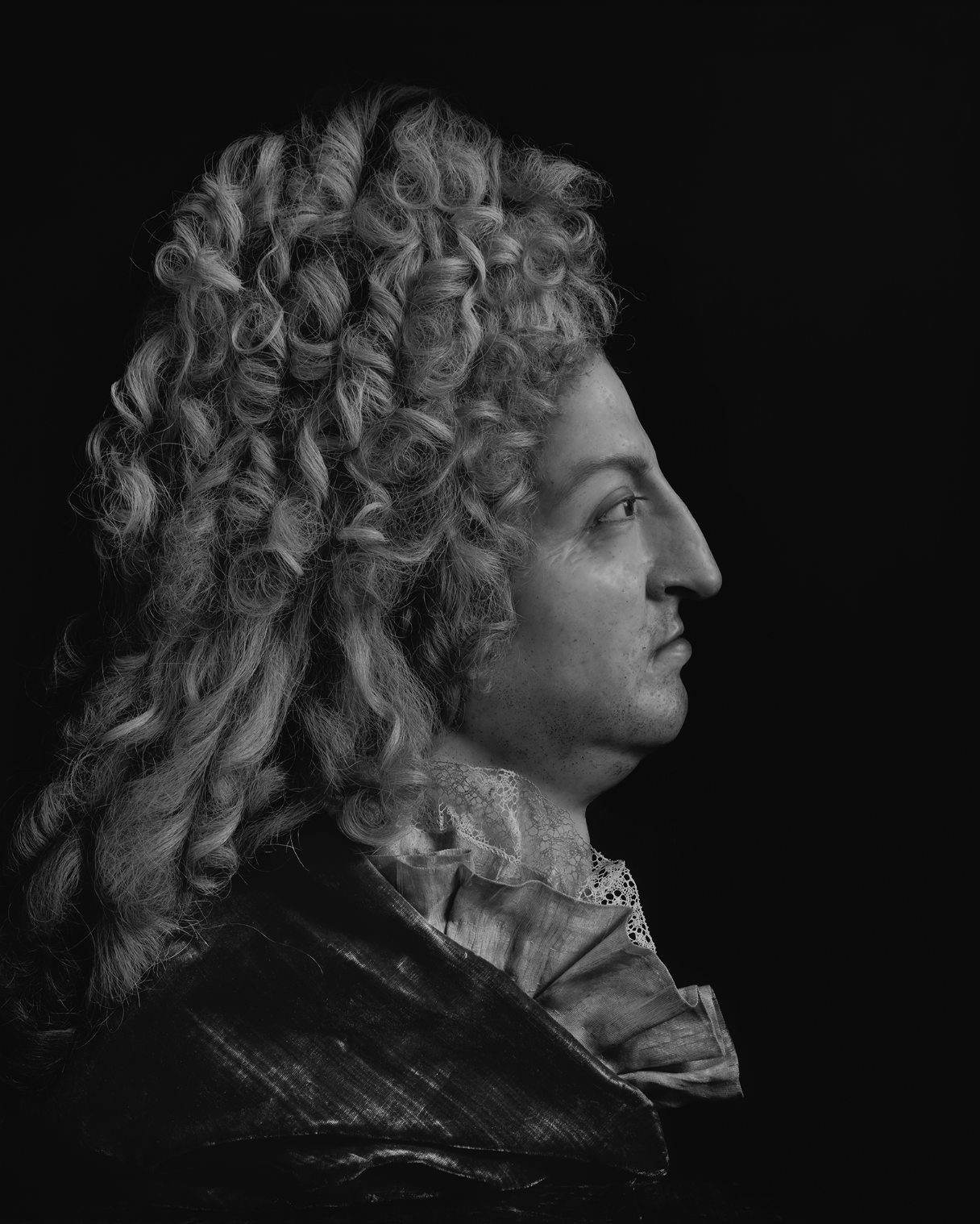 These are all people who have actually visited Versailles. His choice of Fidel Castro certainly reflects Sugimoto’s unique critical mindset with an ironic twist. The way Castro, revolutionist and personification of state socialism, is now enshrined at Versailles evokes images of the members of the imperial family that were guillotined in the French Revolution.
“Castro was a revolutionist, and in the long run, he was also a child of the French Revolution. However France, where the first revolution took place, underwent repeated changes, as the country first became a republic, before the monarchical system was restored. The aristocracy is still strong in France today, and in this respect I think it’s a very strange country.”

Sugimoto’s own outspoken nature also expressed itself in the exhibition at the Pavillon Francais. Facing one another here were the “three most significant characters” according to Sugimoto – Napoleon, Voltaire and Benjamin Franklin. Napoleon, formerly the hero of the revolution, acceded to the throne and built his autocratic regime; Voltaire preached the Enlightenment that ultimately triggered the revolution; and Franklin, inspired by that Enlightenment, became a leading figure in the American Revolution. Separated by several centuries, this “evocation” ceremony gathers the three of them together, and it would be interesting to know how Voltaire and Franklin feel next to Napoleon, the dictator to whom they are connected through the ideas of revolution and independence, but are positioned at the opposite end of the political scale.

Sugimoto also created a new Theater series photograph for the exhibition. He screened Sofia Coppola’s movie “Marie Antoinette” (2006) in Marie Antoinette’s “Théâtre de la Reine,” and he took a photograph of the theater for the entire length of the film. The resulting long-exposure photograph is exhibited in the entrance to the theater. 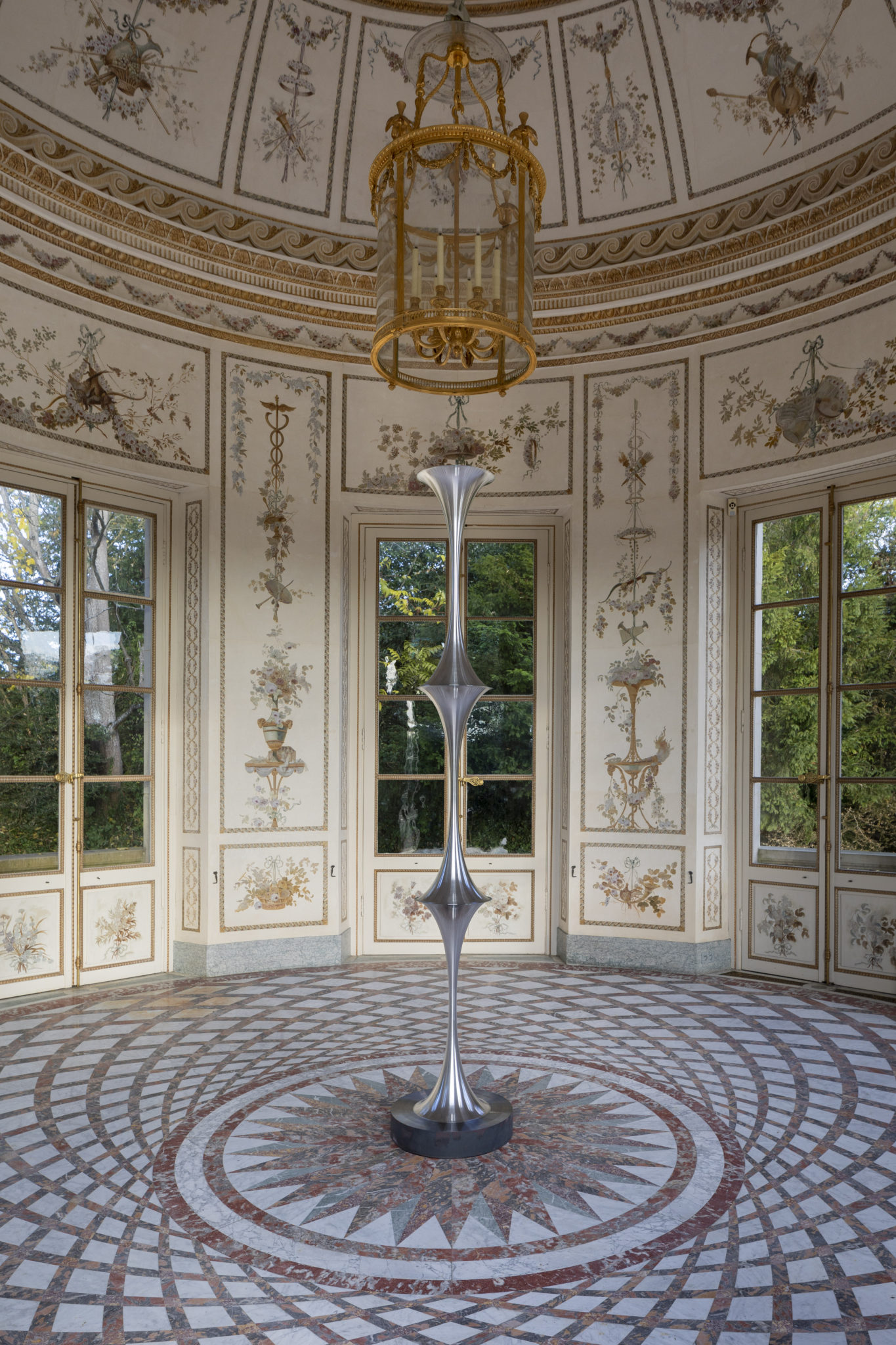 There weren’t only photographs on display. Sugimoto, who continues to operate beyond the boundaries of genres and formats, installed ”Surface of Revolution,” the sculpture from which the exhibition borrows its title, in the Belvedere of the Petit Trianon. Set up in the octagonal salon with its geometrically patterned tiled floor, the object made from solid aluminium is a three-dimensional model visualizing mathematical hyperbolic functions in non-Euclidean geometry. So what is the work’s mysterious title all about?
“The term ‘revolution’ originally means to rotate or turn around, and in that sense, it came to be used to refer to ‘political systems that are turned around.’ So here I played with the word meaning at once ‘rotation’ and ‘revolution’.” 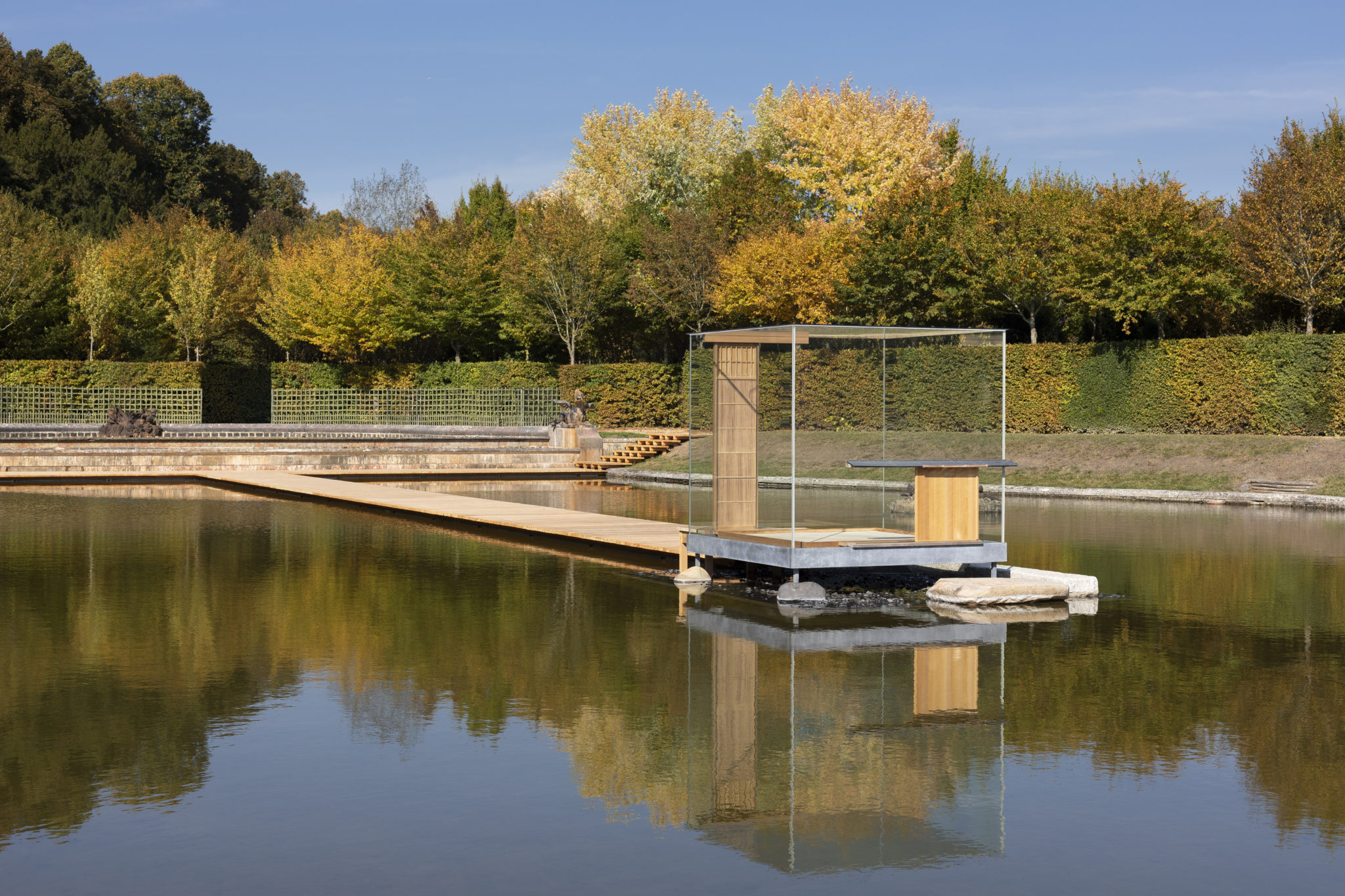 Somewhat the climax of this exhibition was the ”Glass Tea House Mondrian,” a glass tea house that was originally made in Venice, and re-erected at a reflecting pool on the grounds of the Grand Trianon. This tiny, 2-mat-sized space that Sugimoto constructed while drawing from Sen no Rikyu’s own wabi-sabi sensitivity, sits there with a dignified air as it is beautifully reflected in the water surface. Again reminiscent of a Noh stage, it emits a very Japanese form of minimalist beaut.
“By installing this minimalist tea house in a plain kind of environment where Marie Antoinette used to find peace of mind, I wanted to facilitate a conversation between the two spirits of Sen no Rikyu and Marie Antoinette.
The symbiotic relationship with nature is something that has been ingrained in the Japanese people’s sensibility since the Jomon period. Especially in times like today, when the planet is facing all kinds of problems, I think it’s the Japanese people’s duty to promote this.”

In a corner of Versailles, a symbol of the great prosperity of the French royal dynasty, Sugimoto’s voice seems to echo as he argues passionately, in a humble stance yet with zealous eyes. 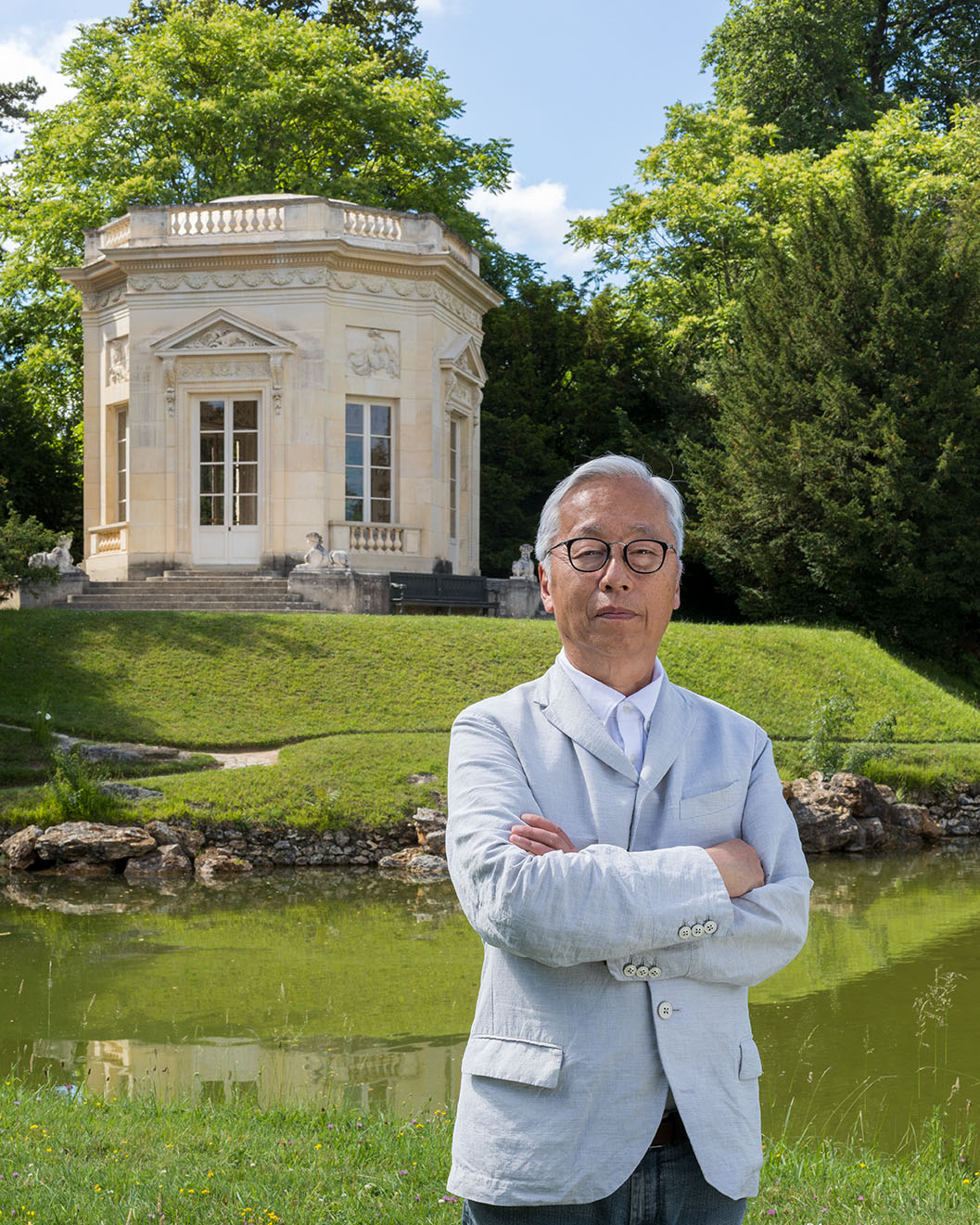