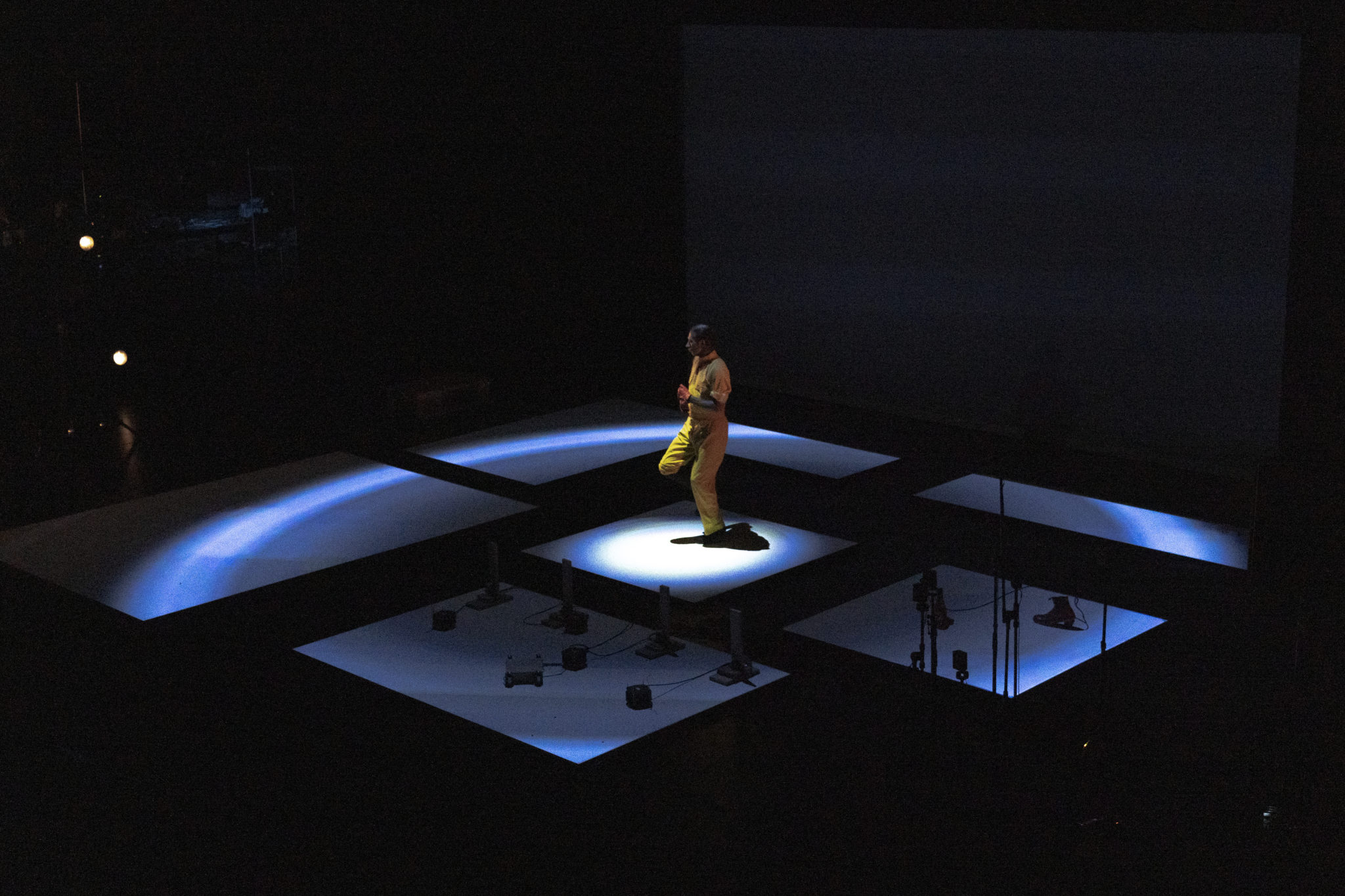 Variously sized square and rectangular boards are arranged on the stage, quite in the mathematical style of a Japanese rock garden. Sitting on a board in the foreground are small devices shaped like a (Buddhist) memorial tablet, while the square boards are covered with gravel. Now what kind of performance are we to expect from this setup? Barefoot and without any musical accompaniment, Israel Galvan appears from the stage wing. He stands on the gravel, and as if testing the ground underneath, slowly begins to move his feet forward while looking straight ahead. He picks up some pebbles with both hands, and scatters them around like unpredictable fragments of time. Before we knew it, the audience was pulled up to the stage, and found ourselves mingling with these fragments. While this is the kind of magic that we’ve come to expect from this artist, I hadn’t imagined this to be the beginning of a new Flamenco piece performed by a human and AI. The setting the genius dancer appeared in was neither a Flamenco nor a computer stage, but some place far beyond these realms. 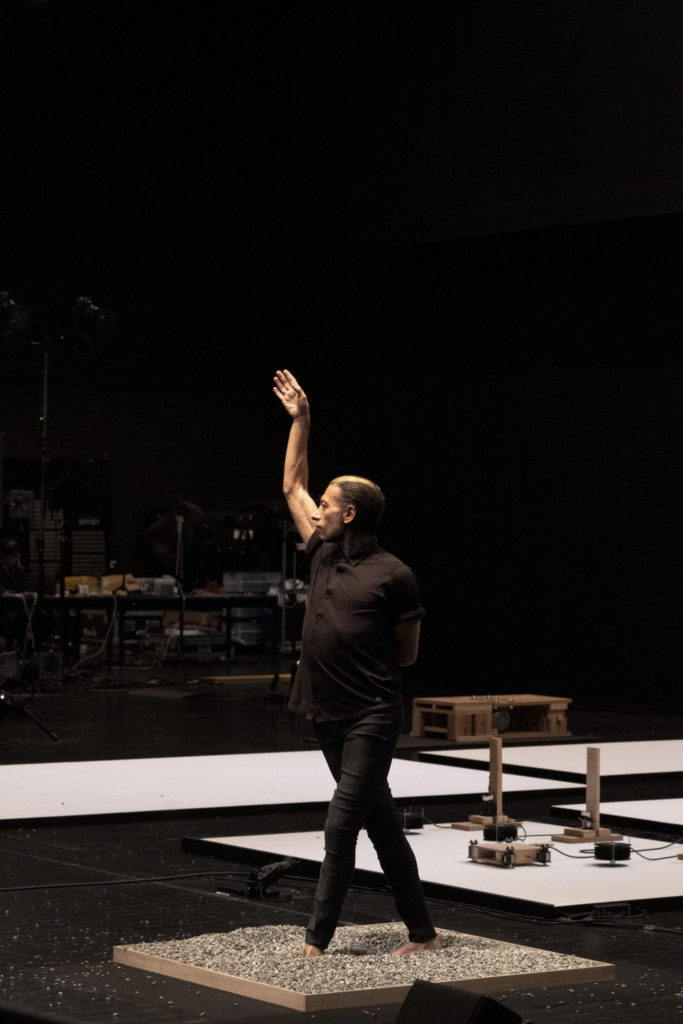 Galvan himself suggested “Israel & Israel” as a title for the new piece. Known in Japan especially since his performance at the Aichi Triennale 2016, this time he teamed up with the Yamaguchi Center for Arts and Media [YCAM], and together they created an “AI Israel made in Japan.” The project revolves around AI technology as a core element, but the piece is not so much about showing the result. It’s more like a detailed presentation of the creative process – an experiment with the relationship between man and AI reset to zero, in order to explore ways of letting both perform together rather than battling each other “Hollywood style.” The key here was the question what kinds of things AI could learn from Israel Galvan, for which the people at YCAM chose to focus on the dancer’s trademark “zapateado” Flamenco step.

AI scientist Nao Tokui first took video footage of Galvan’s dance, extracted his steps, and taught them to AI. Based on the results, he created a trial piece, and even though the imperfect AI performance was obviously a far cry from the real thing, Galvan was intrigued when he heard about it. Objectively seen, it perfectly exposed the dancing AI’s fatuity, but this is exactly where Galvan sensed the piece’s appeal. He called the AI dancer “Betty,” and began to engage in serious collaborative work. The specialized technicians at YCAM made special shoes fitted with piezo-electric pressure sensors, and had Israel perform in them in order to record his steps, but the pressure was greater than expected and caused a data scale-out, so it turned out to be quite a struggle. With such types of sensors, and also including the “solenoid” devices (converting electric energy into mechanical movement) on the AI’s shoes that tap on the floor, the piece does not only revolve around AI, but it functions at once as a laboratory for experiments with totally new kinds of physical computing. 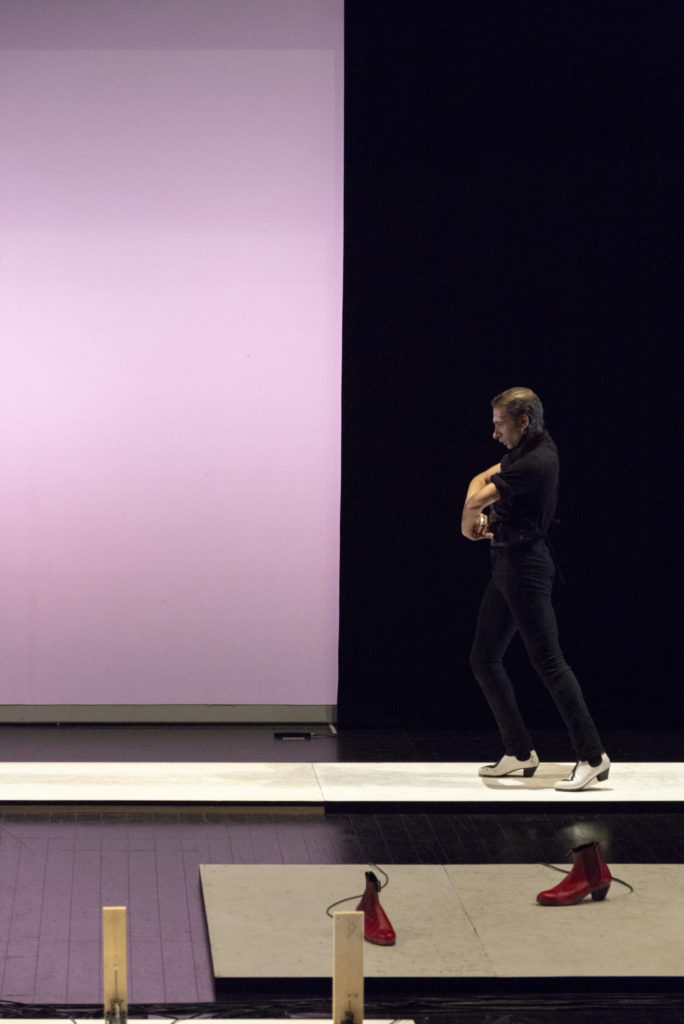 The marvels of tactile communication

The first half of the piece was a showcase of the essence of Israel Galvan’s dance, in which the dancer stunned the audience with his superhuman performance. At some point he changed into a yellow worker style overall, and the boards that originally looked like elements of a Japanese style landscape garden began to blink in primary colors. All of a sudden, the scenery had transformed into a computer game kind of environment, and in a couple of funny scenes Galvan looked a lot like Super Mario, whereas the main attraction here was the “Techtile,” a tool that was co-developed by YCAM and Keio University. People in the audience could hold this tool with both hands and feel directly Galvan’s zapateado as vibration. This was an entirely new experience in which the Flamenco movements were not only perceived with the eyes and ears, but directly with the whole body via the sense of touch – and even one-on-one! 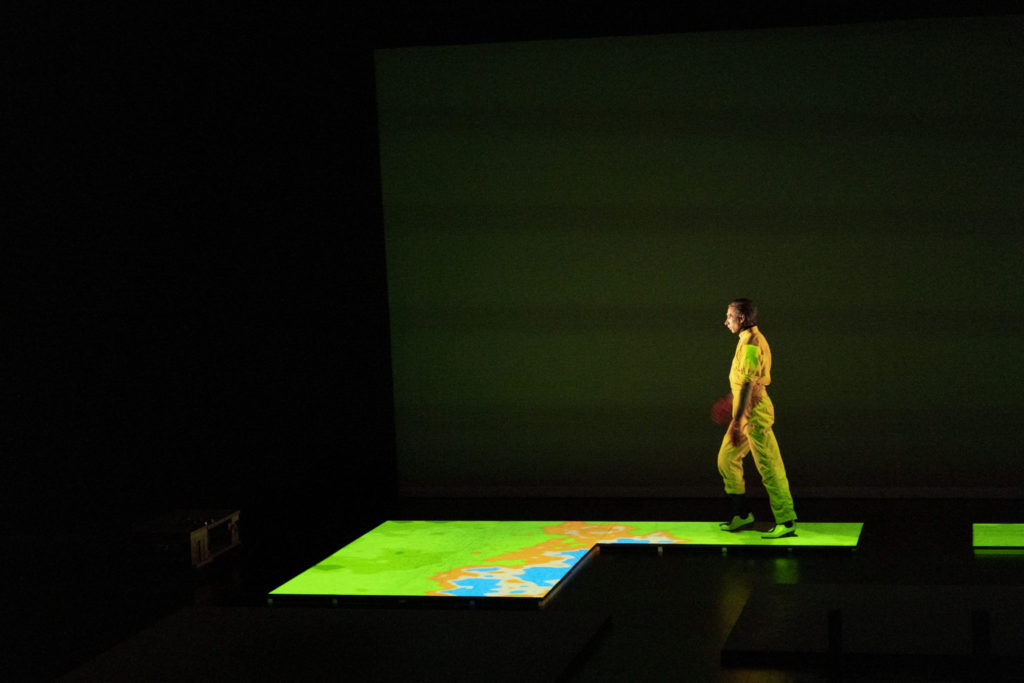 For Israel Galvan, both vibration and sound are central components of his art, and he has in fact tried out a variety of things with them in his previous works. In Flamenco, the dancing body is at once also a musical instrument, and Galvan adds to this even such objects as floors, walls, chairs, and anything else that he can turn into a vibrating body. In this case one can certainly day that the introduction of an experimental machine has taken the method of using the space he shares with his audience as a vibrating body to a whole new level. Under the guise of traditional Flamenco, Galvan has created his own unique style, and also in this respect he surely stands out as a remarkably challenging artist. This latest project raises the question what his feelings are as he faces his own “apprentice” in the form of a machine that has learned his own dance moves. 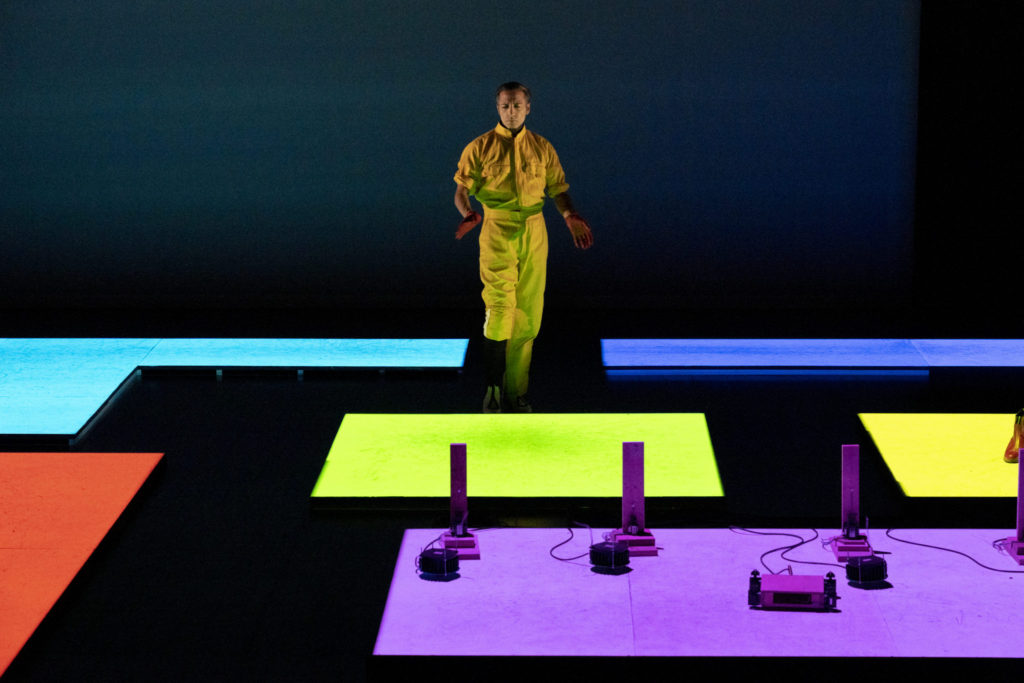 This is what the second half is all about. The AI Israel that has learned the real Israel’s steps in real-time performs controlled via the “solenoid” devices on the stage and those installed in the audience, to which Galvan himself responds with his own performance. As this back-to-back dialogue unfurls in multiple layers, the entire space is gradually wrapped up in furious vibration, almost as if being a large dancing “shoe” itself. There are a few “wow” moments, culminating in the AI dancer’s performance of steps that no human dancer would ever perform. Israel Galvan must have done the zapateado a million times, and in contrast with these uncountably large numbers of human steps, the AI dancer – right because of its imperfection – does something completely new, and thereby creates situations that won’t come about when humans dance with humans. In these situations, we see Galvan perform scintillating zapateado steps, but what actually dances here seems to be neither a man nor a machine, but something else. 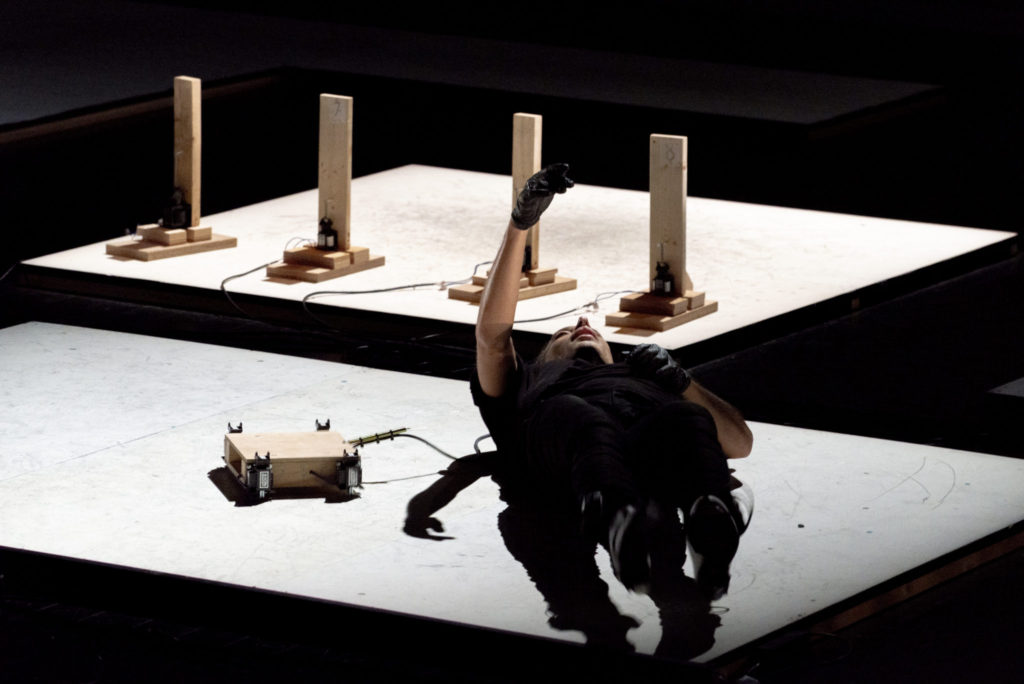 Once the human dancer has left the stage, only the AI one remains and closes the performance with its own unique zapateado. This is a scene that must be sending shivers down the spines of everyone in the audience. There are some glorious moments in the AI Israel’s imperfect dance – moments like those of discovering crystals among the gravel.
“Calculus” is the Latin word for “a pebble or stone used as reckoning counter in abacus,” and is therefore the origin of such words as “calculator.” The pebbles that Galvan picked up and scattered in the beginning of the performance represent the basics of calculation. He used his machine “apprentice” to demonstrate how imperfection and unpredictability are exactly where independence is rooted. Unpredictable is also how Israel and AI Israel are going to transform in the future, but what is clear is that they will continue to venture into the as-yet unknown.