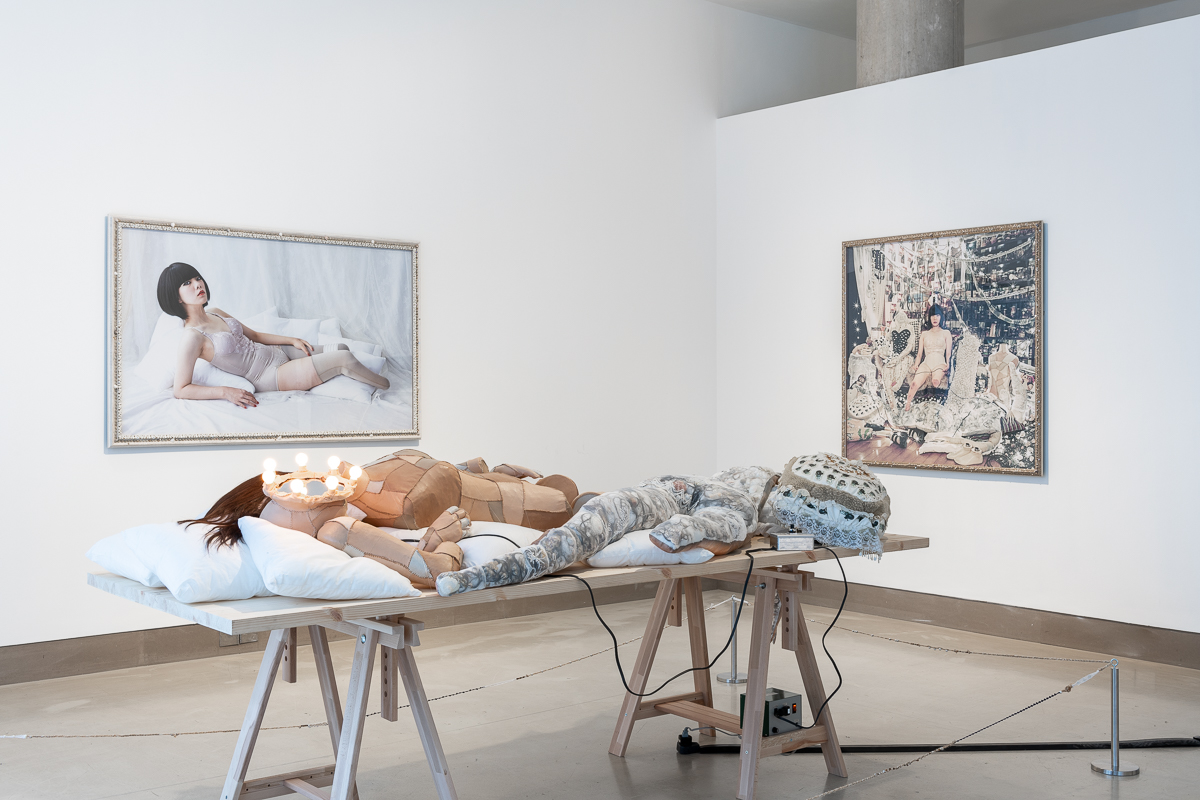 Contemporary artist Mari Katayama’s exhibition “Broken Heart” is showing at London’s White Rainbow gallery until March 2nd. Somewhat a retrospective exhibition showcasing the artist’s work to date, this first solo show in Europe featuressuch early representative works as ”I’m wearing little high heels” and “I have child’s feet” (both 2011), as well as “cannot turn the clock back“ (2017) and “Dolls” (2018), an installation including a human-shaped doll with a mirror instead of a face. Concurrently with the exhibition opening, her book GIFT was published as well. On January 24, one day after the press preview, Katayama appeared in a talk session that the gallery and The Japan Foundation co-hosted at The Royal Society of Arts. Simon Baker, formerly a curator at Tate Modern, and since last year director of the Maison Européenne de la Photographie in Paris, contributed an essay to the aforementioned book, and now took the opportunity to ask Katayama some questions that would give the audience a better understanding of the way she composes her images.

The event started with a short speech in which Mana Takatori, Director General of The Japan Foundation London, praised Katayama’s artistic work to date, stressing how the objects and self-portrait photographs that Katayama creates based on the unique sensitivity nurtured through her own physical experience are increasingly drawing the interest of curators around the world.

The word was then passed to Simon Baker, who encouraged Katayama to introduce her work in a presentation for which she had prepared several photographs. 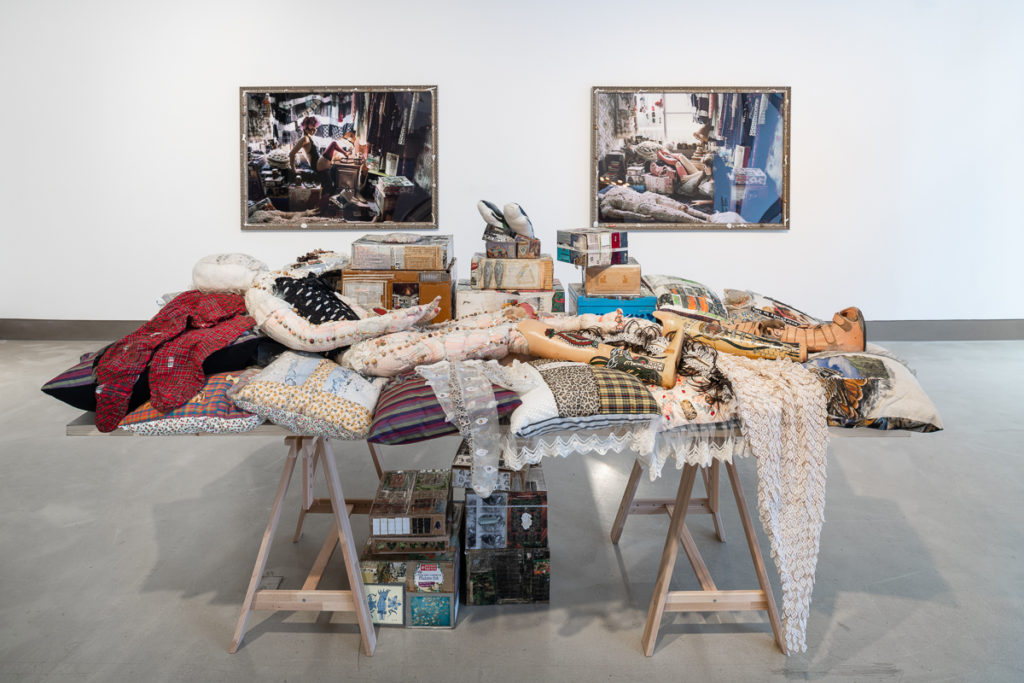 Mari Katayama (born 1987) familiarized with needlework in her childhood, and has always liked to draw pictures. Suffering from congenital tibial hemimelia, she had both legs amputated at the age of nine. Katayama began to connect to other people by sharing photographs of objects and drawings she made, utilizing the social media that had just begun to spread at the time. Through these activities, she eventually became an accepted member of the Japanese art world. Having studied art history at a university in Gunma where she grew up, and photography at Tokyo University of the Arts, she began to create portrait photographs of herself with her own hand-sewn items and decorated artificial legs. Launched in 2011 was the “High Heel Project” for which the artist had high-heeled shoes made for her to stand on the stage in the manner of a singer or a model.

Simon Baker: “I would like to ask you first about this photograph, ‘I’m wearing little high heels.’ Did you have a general idea of what the work was going to look like before you started composing this scene?”

Mari Katayama: “I started off with sketches, based on which I made all kinds of objects. I arranged those objects, and finally dressed up and added myself to the scenery. All this happened in the six-mat room where I was living at the time, and I went back and forth between my position and the camera to check the composition a hundred times before releasing the shutter myself. The final result came out a bit different from my sketches.”

SB: “Let me ask you about your style of placing yourself within your works. Rather than calling them self-portraits, to me they seem more like performances in which you play a character of your own design.”

MK: “This particular photograph does indeed have a story. It’s about the way little children like to put on lipstick, slip into the high-heeled shoes in the entrance, and walk around in them imitating their admired mother… At the time, I was making money by singing songs at night. One day a customer complained that a woman who can’t wear high heels wasn’t a woman, so I thought I’d give him high heels on artificial legs, and eventually started off with making such legs. That was when I realized that the Japanese welfare and healthcare system had been inhibiting people from doing such luxurious fashionable things as wearing high heels. For myself, high heels are at once a symbol for struggle and an image that expresses admiration. On the other hand, I don’t really like to show the picture and give a long explanation like I’m doing it right now. That’s also because this was a photograph that I made for my graduation (from graduate school) in the first place.” (laughs)

SB: “So your graduation work was quite a success, wasn’t it!”

MK: “Well I somehow managed to graduate with it…”(laughs) 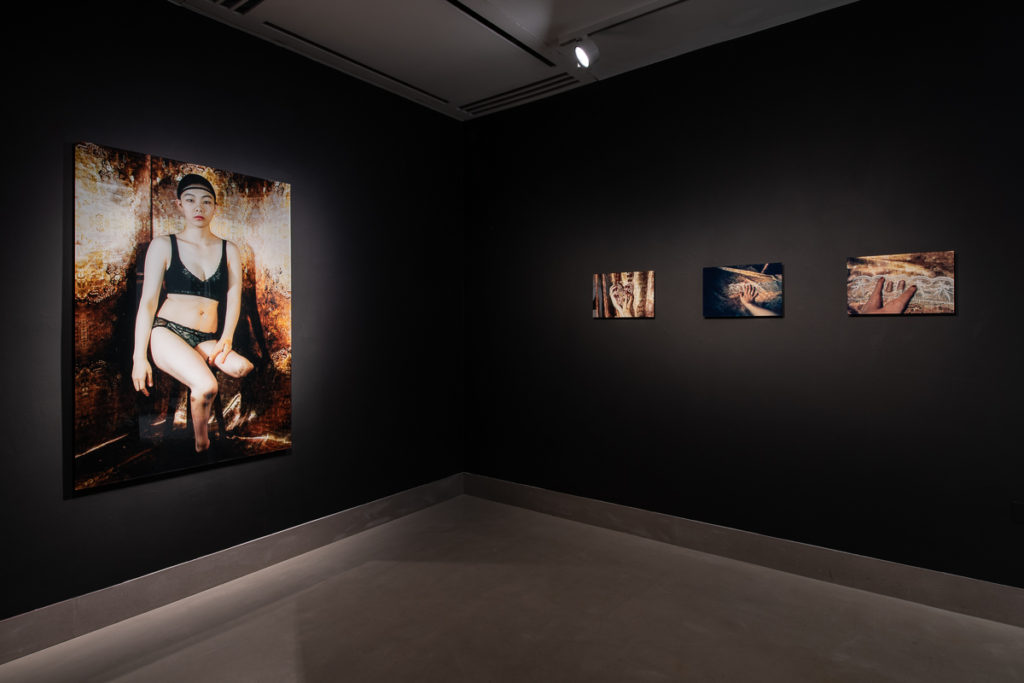 Asked by Baker about her working method, Katayama explained how she established her own style by photographing her room in natural light, and releasing the shutter by herself. She also added that there were no particular photographers or artists that had a direct influence on her work. The images that she creates through trial and error represent Katayama herself and her personal living environment, and the results possess the creative ability to take the viewer away to a totally different kind of world. Katayama concluded that, through the presentation of herself, she wishes to reach down to the feelings of admiration that also exist in the depth of the viewer’s mind.

Katayama then looked back on how she expanded the stage of her activity, and how this brought along changes in her working methods over the past few years. She illustrated this on the examples of the works ”shadow puppet” and “bystander” (both 2016). In the former, she made her deformed left hand (the silhouette of which she usually draws when asked for her signature) the protagonist of a shadow play, added a narrative, and let that incarnation of her hand step out and walk into the world outside. The latter work Katayama originally made for the Setouchi Triennale. As she sensed certain physical limitations while commuting to the Setouchi region from her home in Gunma, she literally needed helpers to “give a hand,” resulting in an object made of cloth printed with photographs of the hands of people on Naoshima, and photographs of Katayama “wearing” those hands like a dress in front of her collaborators and the Naoshima seascape.

MK: “As I was at home making that object and photographing myself in connection with it, the feeling of my own body connecting at once to those of other people was an experience that literally changed my world.”

SB: “Do you think there is some kind of meaning in the photos that contain additional exterior landscapes?”

MK:“I’m not sure about the exact meaning yet, but as I went outside and turned my interest toward the world out there, it occurred to me that I might disappear and eventually stop making self-portraits one day.” 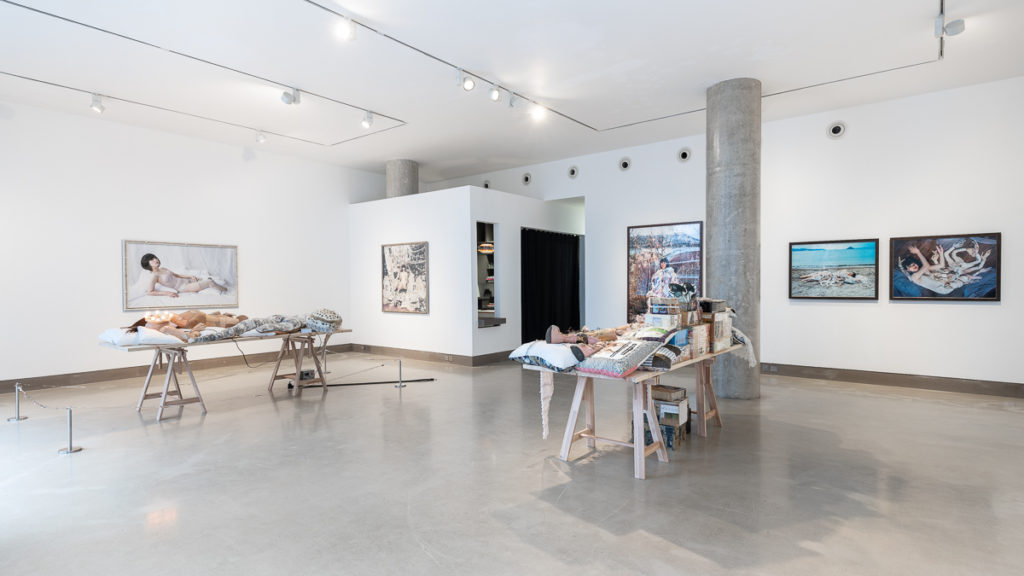 The event closed with a Q&A session in which both Katayama and Baker answered some interesting questions from the audience.

Question to Mari Katayama: “Now that you have opened your mind to the outside world, what kinds of works do you think you are going to make next?”

MK: “I have recently developed an interest in the people and the history of the area in Ota, Gunma Prefecture, where I currently live. There is a river that has been carrying mineral poison from the Ashio copper mine in the adjacent Tochigi Prefecture, and thereby polluting the fields in the area.

I felt like climbing a mountainand seeing how the people there have overcome that part of history, and how they live in the region today. The birth of my daughter is another aspect that will probably inspire me to take different photographs in the future.”

Question to Simon Baker: “Why do you think Mari Katayama’s works are so popular in the UK right now?”

SB: “I have just become a Frenchman so it’s difficult for me to answer this question…“ After the laughter in the audience had calmed down, he continued to explain his views. “I first saw Mari Katayama’s photos at the Unseen Amsterdam photo festival. I was there with some of my colleagues at Tate that are here with us today as well, and to me Mari’s works looked just different from any other photographs that I had seen before. That’s not because she is Japanese. It’s on a completely different level. I think I felt that way because the photographic worlds she creates are so unique. And as we have all witnessed today, Mari’s photographs have a rare kind of communicative ability. With the “voice” of photography that she has made her own, I guess she will easily surmount the differences between Eastern and Western cultures.” 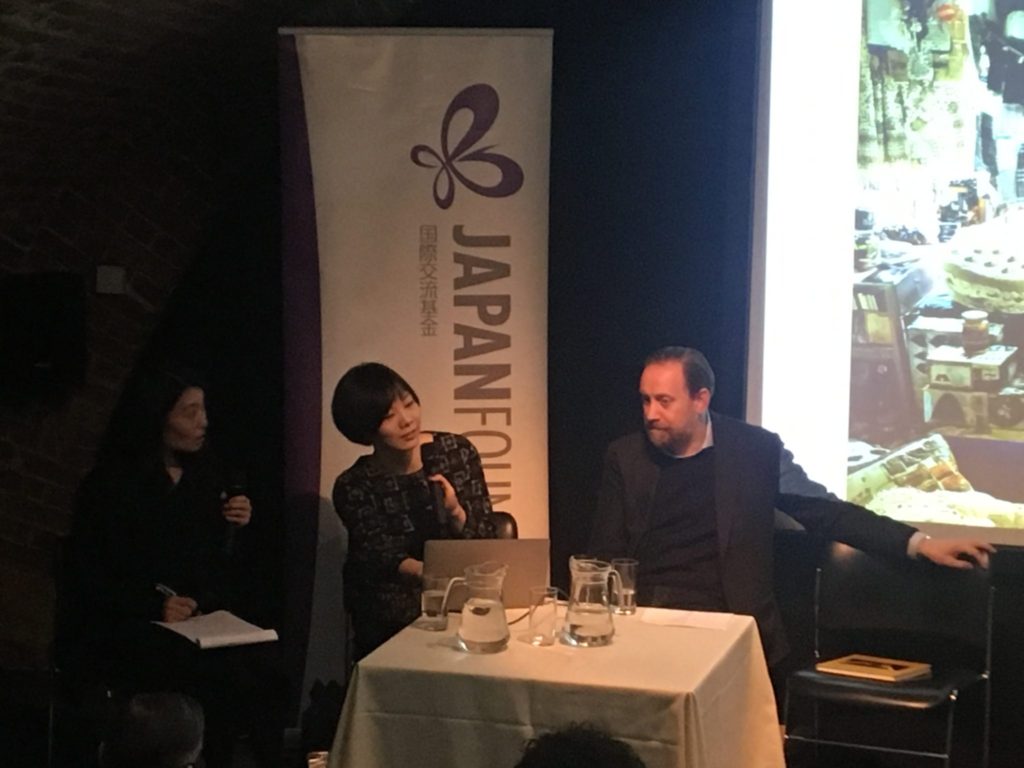 As the talk session ended here because time had run out, I’d like to add some quotes from Simon Baker’s essay on Mari Katayama in the book GIFT. Baker describes the artist’s subjectivity as “a process of representation which is also a process of self-discovery, self-definition and self-construction,” or in other words, “a constant process of self-reconstruction.”Furthermore, responding to an article on Katayama that The Guardian published in 2017, and in connection with such keywords as “identity” and “performance,” Baker mentions Katayama in the same breath with contemporary artists like Cindy Sherman or Jeff Wall, while leaving at once room for discussion about her unique and unprecedented style. Referring to the extremely private nature of the artist’s practice surrounding herself with her own paintings and objects, and to the multilayered creation processes that ultimately result in photographic works, he points out that her materials “take on the kind of symbolic value that are usually associated (in the work of artists like Bourgeois or Kusama at least) with more abstract anamorphic forms.”

For his cautious interpretation of the resulting artworks, Baker further quotes the dissident surrealist Georges Bataille, and a line from André Breton’s attempt at self-portraiture in his piece Nadja. As we learned also from Katayama’s own presentation, creating works of art is for her synonymous with being alive. Baker accordingly calls her “an artist who is engaged in a long-term process of re-thinking physical paradigms, and who, indeed, lives this process on a daily basis,” and suggests that Katayama “find meaning not in herself as such, but in the complex web of the things with which she surrounds herself.” While the images produced this way sometimes come out different from what Katayama initially imagined, she continues to frame the sceneries she creates by variously “founding, co-opting, producing or reproducing,” and eventually releasing the shutter by herself. The resulting “abstract anamorphic forms” represent not so much the artist herself, but they probably function more as a “voice” for her to express herself.

飯田真実 Mami Iida
Project Manager for Art Exhibitions. Graduate from Professional Master of Science and Technique of the Exhibition at the Université Paris 1 Panthéon-Sorbonne. She has gained several working experiences between France, Canada and Japan, particularly in the operation of a wide range of international contemporary art projects and festivals such as Montreal Biennale (2011), The Japan Media Arts Festival (2012), Aichi Triennale (2013), etc. She was in charge of exhibitions on behalf of ‘Maison de la culture du Japon’, The Japan Foundation’s platform in Paris (2014-2017). Working freelance since 2017, she is currently also active as an art journalist, contributing articles on exhibitions in France to such publications as The Asahi Shimbun (since 2011) and Bijutsu Techo (since 2017) among others.
View all articles by this contributor