HOME > REVIEWS > OUT AND ABOUT
> AIT ARTIST TALK #76 “Greenware”
Artist Talk by Florence Dwyer from Glasgow, Scotland
OLD HAUS, March 20, 2019
OUT AND ABOUT 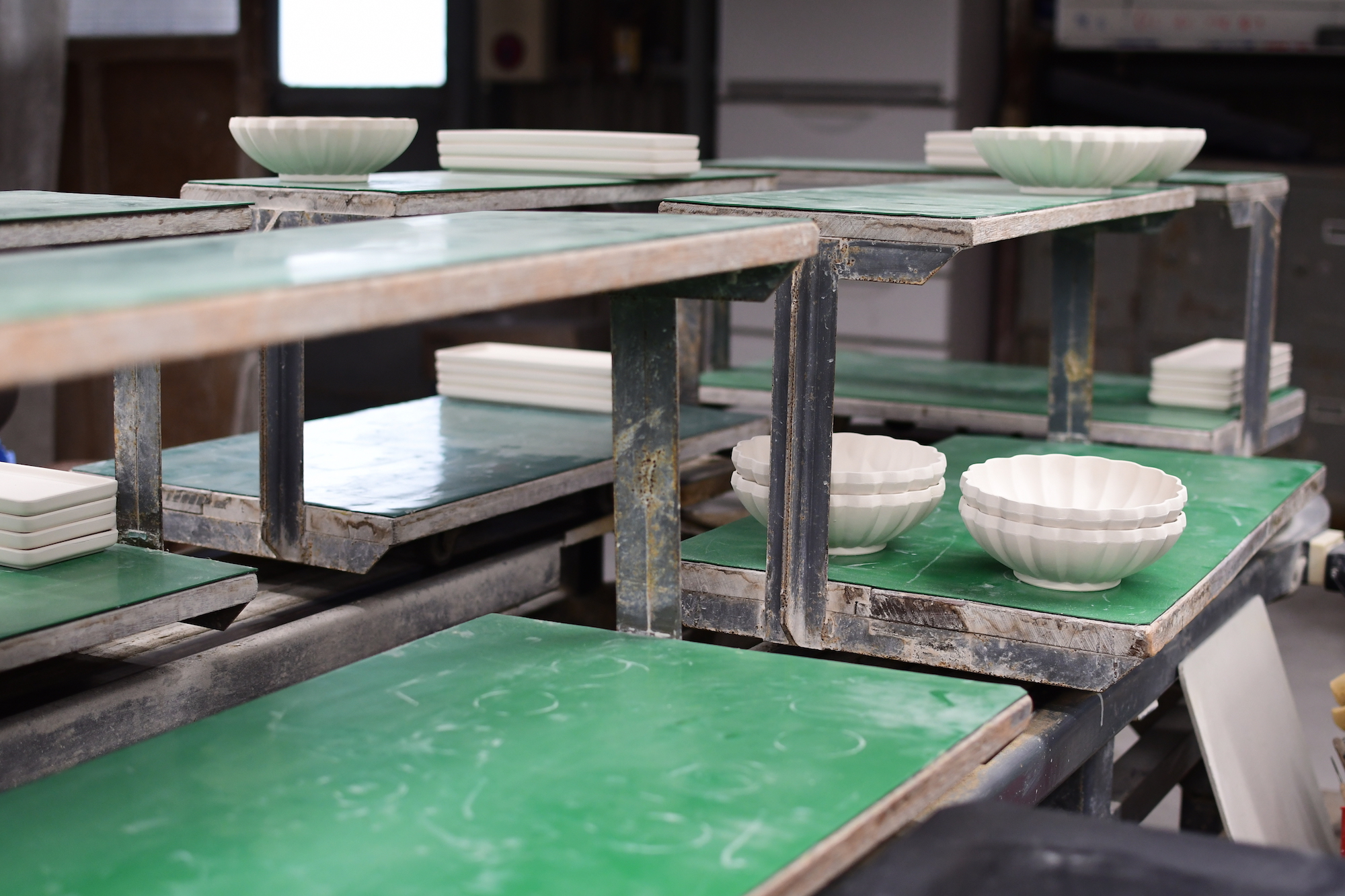 Known primarily as a production area of the so-called Arita ware, Arita in Saga Prefecture is a pottery town with a 400-year-old tradition, and a population of 20,000, most of which are involved with this industry in one way or another. The most characteristic feature of Arita ware is that, even though it is mass-produced, there are always hand-made parts. It is produced by a traditional division-of-labor method, involving first-class craftsmen in every single step of the process from clay production and molding to glazing, ornamentation and firing, all of which are based in Arita. Creative Residency Arita (CRA) is an organization that was launched here in 2016 as a Japanese-Dutch cooperative project at the occasion of the celebrations of 400 years of Arita ware. Next to providing ateliers for practical creative work, CRA creates and coordinates connections between invited artists and local artisans, based on research at the Saga Ceramics Research Laboratory.

CRA and AIT, Arts Initiative Tokyo, a contemporary art NPO based in Daikanyama, Tokyo, are both organizations that host artist residencies, and for this project they teamed up for an entirely new residency program. While there exist numerous exchange residency programs between different regions, cases in which one program is co-hosted by two different organizations/venues are rather rare. A briefing session of this particular project was held together with an exhibition for one day only at OLDHAUS, a refurbished space in an old private house in Namikibashi, Shibuya.

The project was initially inspired by the reaction of artists who were invited by AIT two years ago, and pointed out the scarceness of casually usable kilns in Tokyo. The artist and members of the AIT staff then visited CRA, which had just been launched earlier that year, and upon seeing their well-equipped facilities, suggested establishing a link that would connect Tokyo with the advanced techniques of Arita ware. At the same time, CRA was eager to show the fruits of their residency programs also to people/places outside Arita, so the project that was worked out as a result focuses on that area where the needs of both sides overlap. After issuing an open call for entries in cooperation with Cove Park, an artist residency institution in Argyll and Bute, Scotland, artist Florence Dwyer and design curator Stacey Hunter were chosen to participate, and eventually stayed and worked for two to three months in Tokyo and Arita. 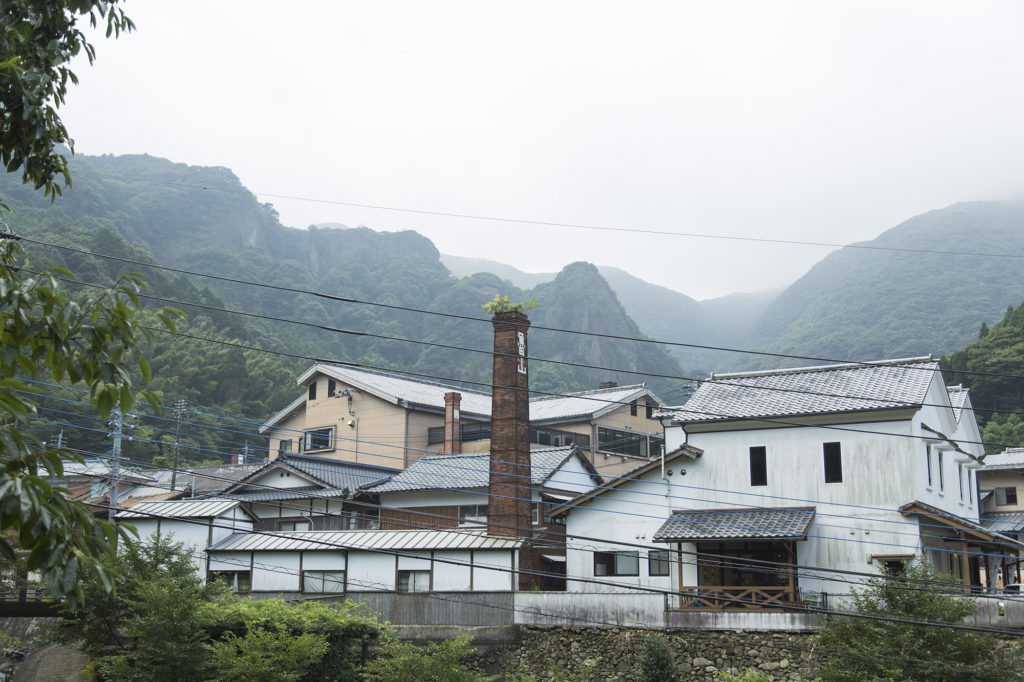 According to Yoriko Ishizawa, who is in charge of residency programs at CRA, the biggest advantage for artists who visit CRA is that they have access via CRA to the advanced Arita ware techniques. In reverse, Arita benefits from the unique ideas and views of artists, and how they inspire the craftsmen at the workshops. By accepting not only ceramic artists and designers, but also curators, and artists from other fields than ceramics, the idea is to cause chemical reactions of sorts among the artisans that help do away with preconceived ideas about Arita ware. Even though the development of products that stimulate a revitalization of the local industry is not the primary goal, it does happen that truly magnificent works are created in the process. “Made by Rain” by the Dutch designer Aliki van der Kruijs, the resident artist in 2017, is a work in which the artist and Arita craftsmen together developed a method of capturing raindrops at the glazing stage. Each item contains detailed information regarding the place, latitude/longitude, date and time of the rain it encloses. 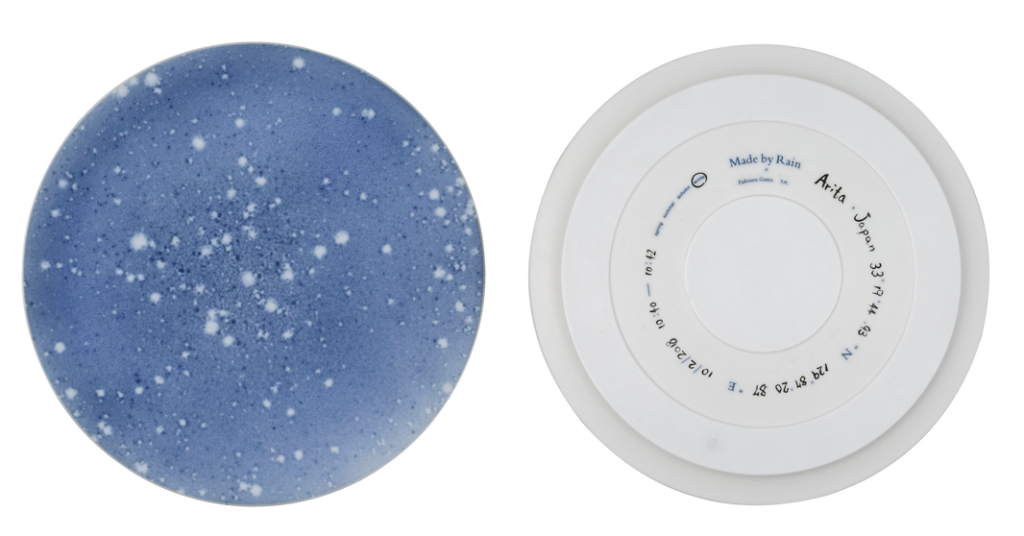 In the second part of the talk event, resident artist Florence Dwyer gave a report of her activity. Based in Glasgow, Dwyer conducts research into the stories embedded within objects of daily use, translating the results into installations which combine elements of pottery, textiles and furniture among others. In her work created in-residence at the Tenement House, a public museum in Glasgow which was formerly the apartment of a single Scottish woman, who lived there until 1965. The traditional tenement apartment was acquired after her death and conserved with everything it once contained. Dwyer was granted access to the archive which included an extensive collection of the former residents belongings; from used pieces of soap to worn pieces of clothing, all shaped to their last use. She conducted interviews with local residents and collected their disused daily necessities as a way of building on to the museums archive to explore the personal (hi)stories such objects contain. Dwyer also plunges right into the manufacture of such things as carpets, creating rugs incorporating images of her own recollections of personal living spaces during a one-year internship at a local rug factory. 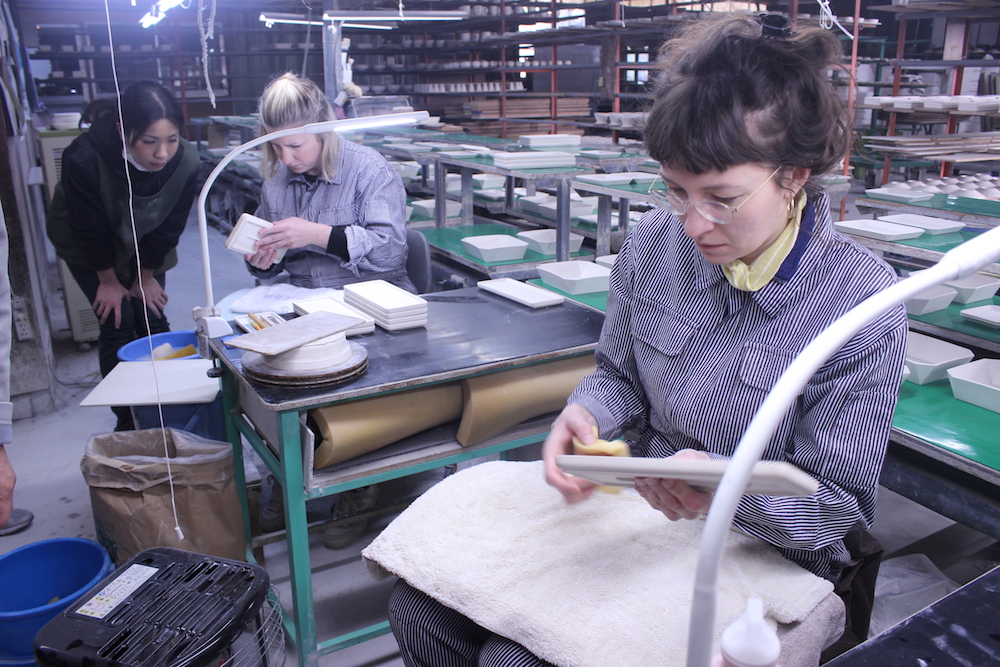 After engaging with all sorts of daily commodities at an antique market at the Tokyo City Keiba racetrack, Dwyer relocated to Arita, where she spent eight of the ten weeks of her residency. Here again she started off with an internship at a local factory, where she spent a week helping out with various tasks and mainly spending time in the cleaning section which involved wiping dust off the ceramic objects prior to their first firing. Her understanding of how integral even such trivial operations are to the process of porcelain production eventually helped her conceive her own work.
During her residency in Arita, Dwyer made a series of small perfume bottles, which reference the shapes of scent flasks used in ancient Rome, the culture vessel for storing Penicillin designed by Norman Heatley, and bottles from the early Shiseido archive which shed a bit of light on Japan’s connection to the west through cosmetics.
Perfume flasks are containers for liquids and fragrances, while Penicillin bottles allow for sterilization and incubation according to their vertical/horizontal position. It is this aspect of design and functionality coalescing in small objects, which in either case are made to improve our living and physical conditions, that Dwyer found interest in. She commissioned a molding craftsman in Arita to create four different molds, from which she created a total of 40 little vessels with differently coloured and textured glaze. Their geometric designs were defined by the rhythm of the rotating plaster wheel through which she used as a tool to hand carve the original designs. 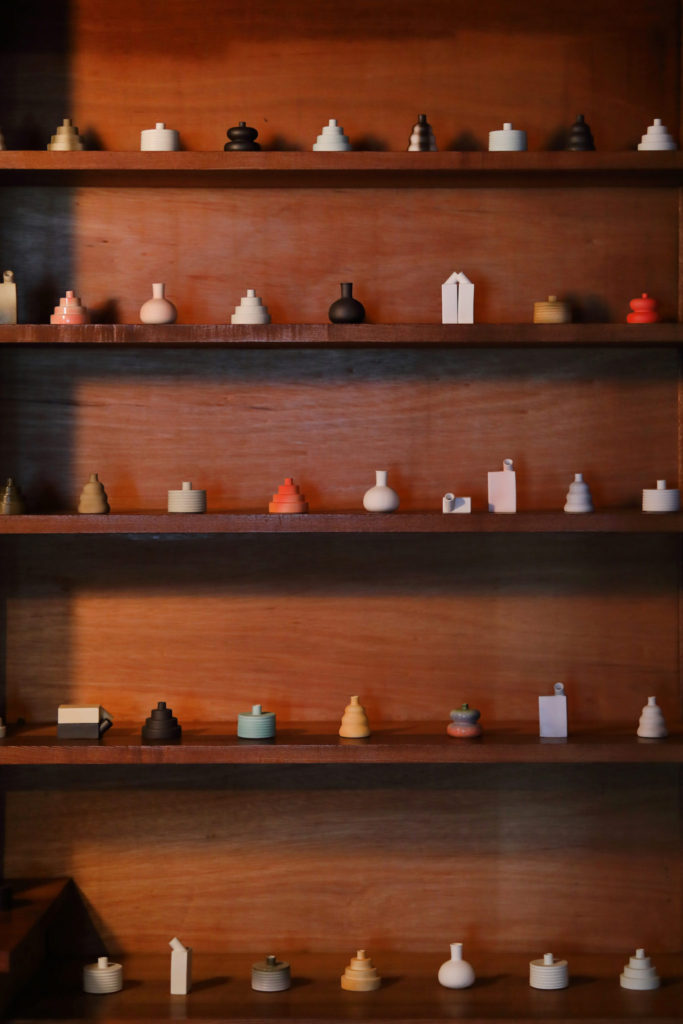 The title “Greenware” is a term that refers to ceramics prior to firing, when they are at their most malleable and vulnerable stage, and at the same time, it reflects the green of the fields and mountains of Arita, of the factory workers’ uniforms, and of their machines and workbenches. Dwyer tried to reflect these observations through her glazing choices, also particularly paying attention to the matte textures and colours of the faded galvanized-iron roofs. The memories of things she has seen with her own eyes, touched with her own hands, and experienced with her own body during her stay in Arita are condensed within these tiny objects she created. “The chance to partake in the long history of artisanship in Arita was for me a significant experience. I think that it’s especially the Arita craftsmen’s approach paying great attention to detail that will have a major effect on my own future work,” Dwyer looks back on her time in Arita. She also announced that she is going to develop the series further once she is back home in Glasgow. 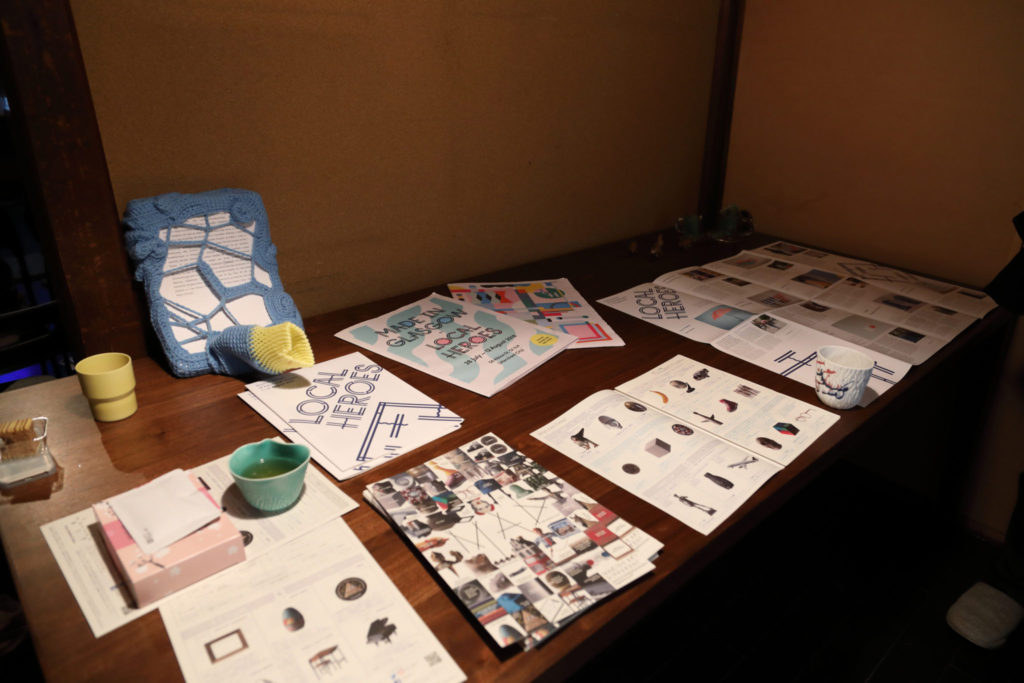 Also on display were materials related to the “LOCAL HEROES” project by design curator Stacey Hunter, whose residency coincided with that of Florence Dwyer, the artwork created by the previous AIT resident artist along with brochures from the AIT’s latest educational program (MAD).  Photo by Yukiko Koshima

Residency programs in which artists stay and work at different places are special opportunities for them to spend time entirely as artists. The extraordinary perspectives of artists on ordinary matters of daily life function as triggers for us to renew our own ways of living and understanding the world around us. This program based on a collaboration between professionally skilled craftsmen, researchers and residents of Arita, and AIT with its communicative functions as an international hub, was a unique and flexible endeavor in which both sides made use of each other’s strengths, and which inspired various thoughts on the program’s further cooperative and developmental potential. In a nutshell, it is the quality of the works created during a residency that ultimately defines the value of the program at large.