HOME > REVIEWS > OUT AND ABOUT
> Bourse de Commerce Pinault Collection Paris, France2021.5.19
OUT AND ABOUT 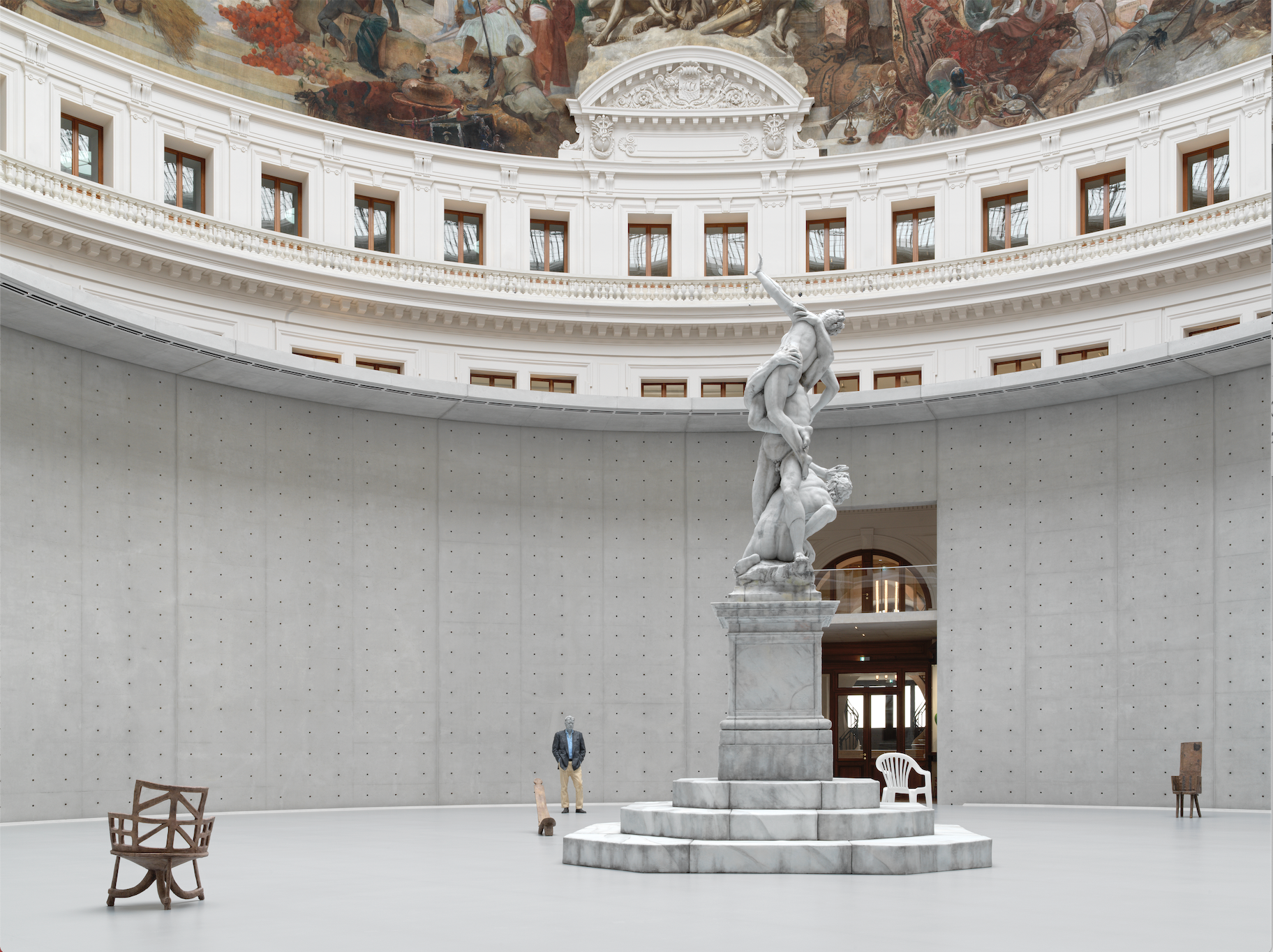 An arousing encounter between tradition and modernity. On the opening of the Bourse de Commerce Pinault Collection.

Having opened on May 19, the day that marked the long-awaited relaunch of cultural facilities in France that had to remain closed due to the pandemic, the Bourse de Commerce Pinault Collection is one major new attraction in Paris. The private museum is centered around a collection of approximately ten thousand items that the famed businessman and art collector, François Pinault has amassed from the 1960s up to today. On a total of five levels, the building houses ten exhibition rooms, a theater style multi-purpose hall, and in addition, a restaurant run by 3-star chefs Michel and Sebastien Bras – in fact their first own place in Paris.

The relationship between Paris and Pinault has been an intense love-hate kind of affair. Pinault had been talking about his “eternal dream of opening a musuem in Paris” for quite some time, and in 1999 he eventually took the first step toward realizing it. However when his suggestion to build a museum with architect Tadao Ando, on the site of the former Renault plant on the redeveloped Ile Seguin island, was delayed by six years by the city administration of Paris, he finally threw in the towel. After abandoning his plans for Paris, he and Ando went on to establish two museums, the Palazzo Grassi and the Punta Della Dogana, in Venice. But Pinault’s affection toward Paris obviously didn’t disappear. When city mayor Anne Hidalgo approached him in 2015 with a proposal to refurbish the former Stock Exchange, he readily agreed.

For Tadao Ando, being entrusted with this monumental landmark of 19th century architecture by Henri Blondel, was without a doubt a difficult project that involved considerable limitations. The plan he came up with in order to revive the building as a museum for contemporary art, yet without corrupting its original architecture, was to build a second wall within the existing exterior wall.

“While paying tribute to the memory that is stored in the original wall, the idea was to build a nested structure and thereby generate a dynamic that inspires a dialogue with time,” Ando explains. By erecting a concrete cylinder, nine meters high and 29 meters in diameter, he eventually created a new, separate space detached from the building’s antique original interior wall. 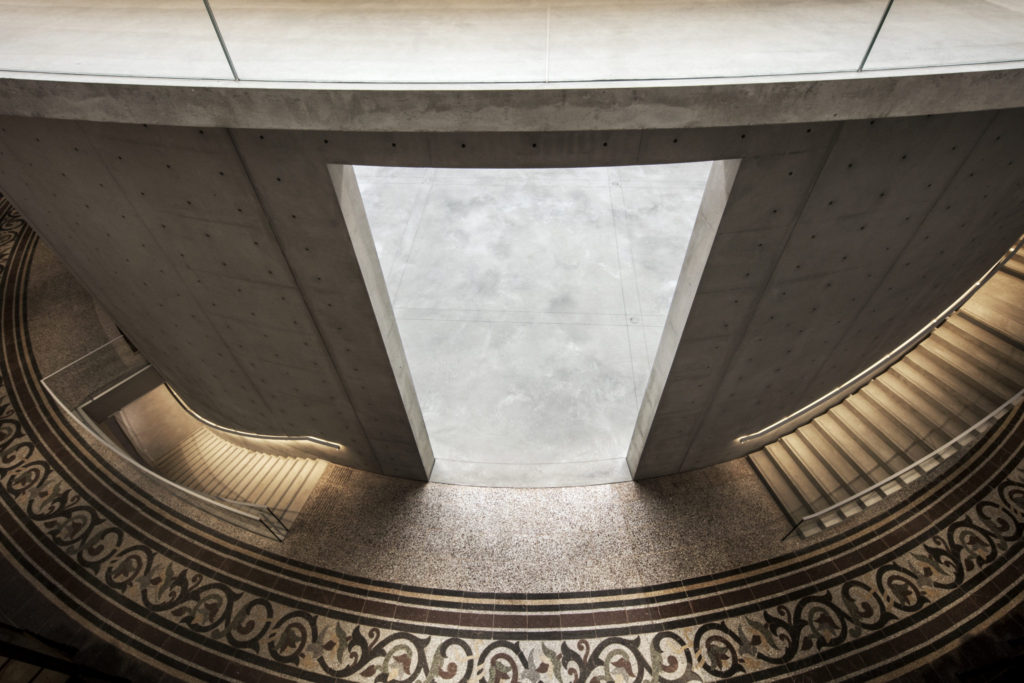 The dialogue here takes place on a number of different levels: between past and present, tradition and modernity, time and form, organic wood and concrete, light and shadow.

Upon entering the museum, the visitor first walks into a corridor called Passage. This space, fitted with lamps that reproduce the original 19th century interior design, engenders a peculiar atmosphere that mixes good old Parisian flair and the modern textural simplicity of concrete.

Displayed in showcases along the corridor are works for which Bertrand Lavier humorously modified all kinds of industrial products into ironically suggestive objects, including a transformed Peugeot bike. Next to the aforementioned dialogue between tradition and modernity, the transformation of value is an additional theme in these works. 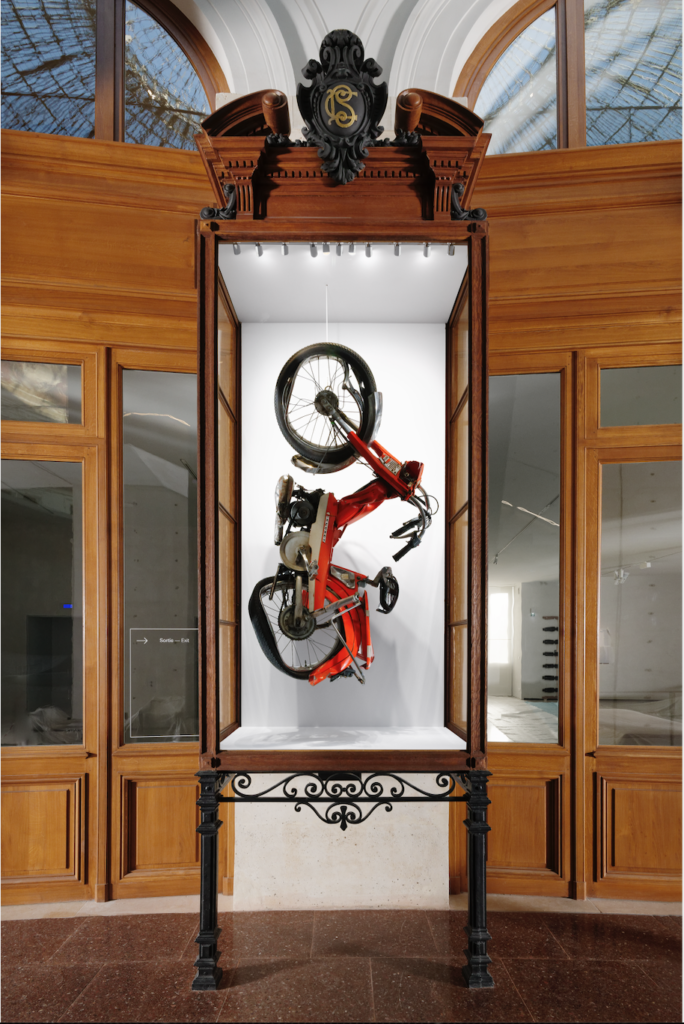 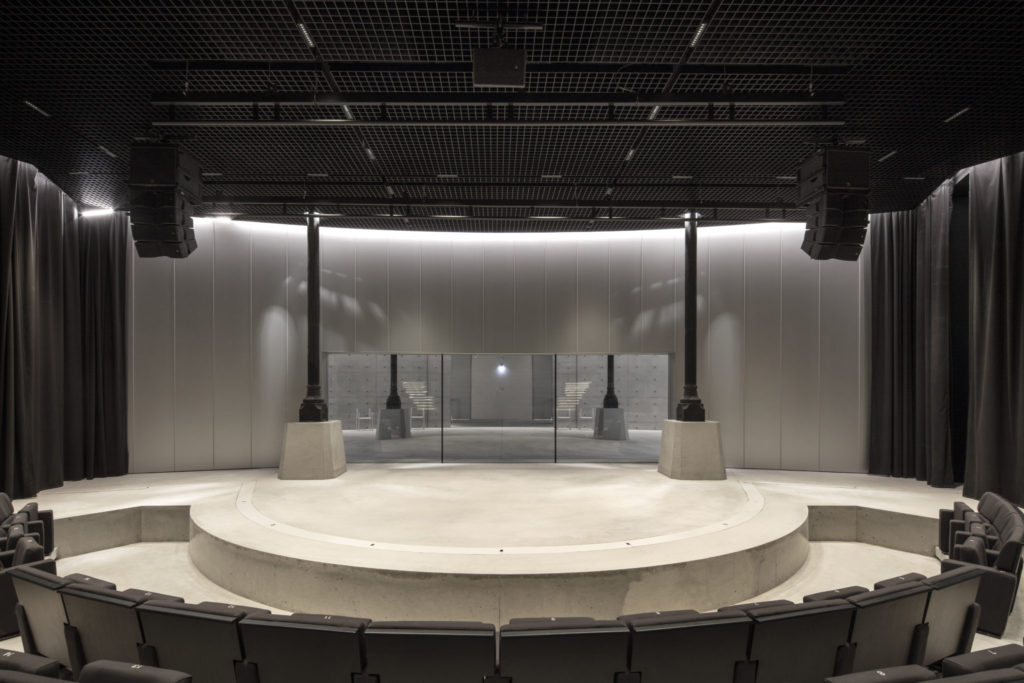 Stepping into the concrete structure from the surrounding corridor, visitors find themselves in a space charged with the almost sacred air of an ancient theater. Ando states that he “wanted to achieve an experience comparable to that of visiting the Pantheon on Rome.” Light falling through the magnificent glass cupola into the minimalist kind of space, seems to be purifying the interior by clearing away all superfluities, while the gradually changing light conditions make the visitor actually feel the passage of time, from the past to the present, and into the future.

The objects that are distributed rather sparsely across the luxurious interior, as well as the sculpture in the center, are works that Urs Fischer exclusively created for this occasion. What looks at a glance like marble sculptures, is in fact all made of wax. Along with the evanescence of things that cannot escape transformation due to heat and humidity, these works once again remind the viewer of how time passes.

Shown in the exhibition rooms, to be reached via a staircase that spirals around the cylinder, are a variety of works by famous artists and young creators alike, including paintings, sculptures and photographs by the likes of David Hammons, Luc Tuymans and Cindy Sherman among others. At the bottom of the 19th century wall paintings that surround the cupola, an array of little objects by Maurizio Cattelan underline the fact that visitors should pay attention even to the smallest details in this museum.

This title of the opening exhibition, “Ouverture” not only refers to the opening of the museum itself, but it also encompassed the notion of openness to society, toward all things and people. At the same time, it supposedly also refers to the new viewpoints that are opened up here, in accordance with Pinault’s own remark about art itself as being “the quickest means for grasping the world around.”

All of his passion and conviction converge in the facility that now rises above the Les Halles district in central Paris, aiming to be an open place that brings more people together with contemporary art, and thereby play a central role in the future of Paris as a capital of the arts.