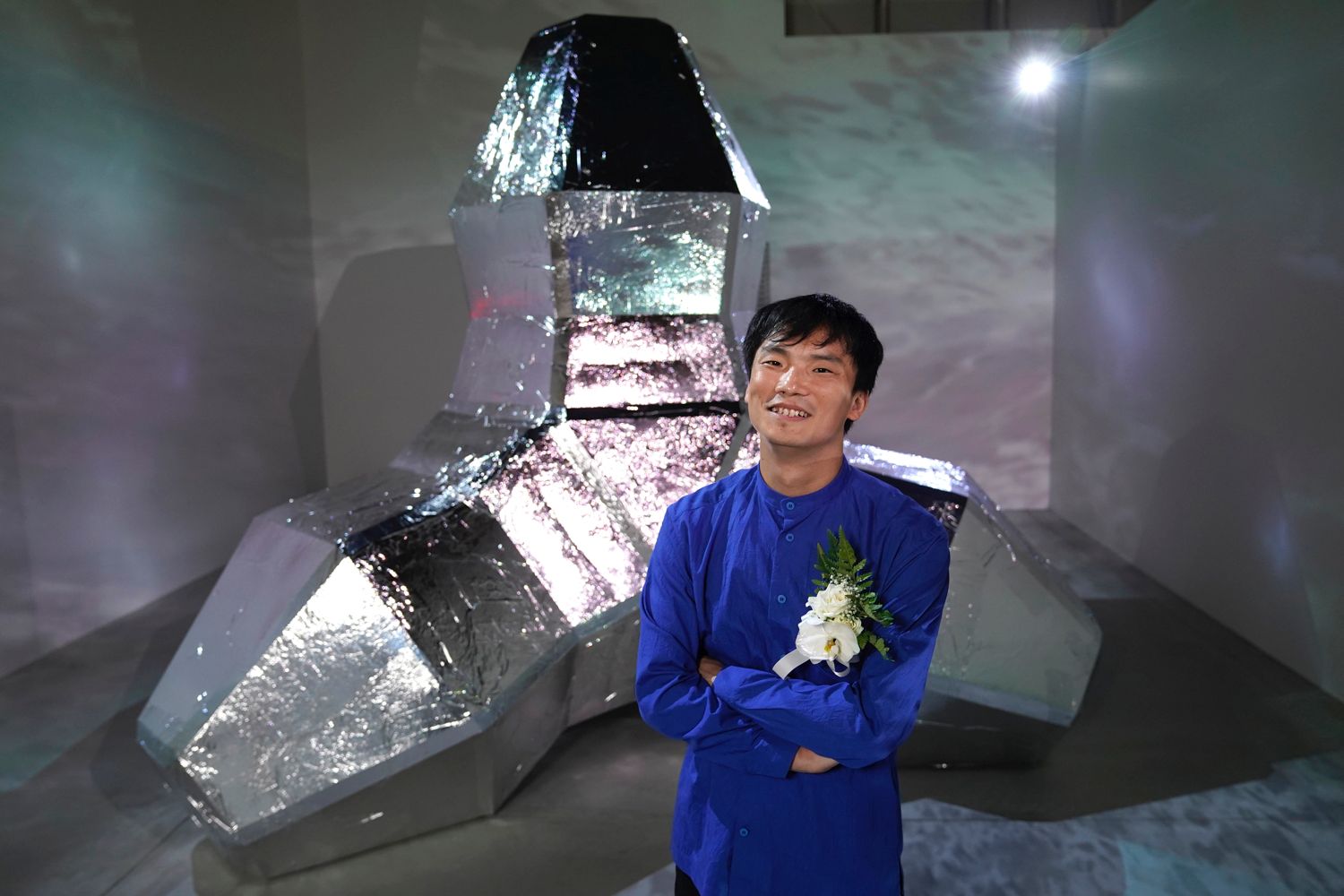 When jury chair Fumio Nanjo made his announcement, a screen showed Han raising his face to the sky and breathing out deeply, as if letting out all the emotions that were swirling inside him. The final round of judging for the 2020 edition of the Nissan Art Award, which took place online due to the coronavirus crisis, was an extremely close contest between five finalists – all of whom could well have taken home the Grand Prix.

The global pandemic and the many problems it has brought to the surface have disrupted systems all over the world. How did the Finalists Exhibition, which took place in the midst of this crisis, reflect the atmosphere of our uncertain age, and what message did it send? Let us reflect on the purpose of this summer’s Nissan Art Award by taking a look at the finalists’ artworks and comments from the international jury. (An exhibition featuring the five finalists’ work is on at the NISSAN PAVILION in Yokohama until September 22.)

The Nissan Art Award was established in 2013 on the occasion of the 80th anniversary of Nissan Motor Co., Ltd. It is open to contemporary artists based in Japan, and aims to further the careers of artists able to make their mark on the international art scene. Finalists are chosen among Japan-based artists who have been particularly successful in the past two years, and the Grand Prix winner is determined by a final round of judging in the form of an exhibition. The jury consists of leading curators and directors from the international art world. The past three Grand Prix winners – Aiko Miyanaga, Yuko Mohri, and Hikaru Fujii – have all built successful careers both in Japan and internationally, and the award appears to reach ever greater qualitative heights every year. (Guessing the Grand Prix winner at the final exhibition has become something of a sport for art enthusiasts, too.) Since 2015, the award has also teamed up with a number of major residency programs abroad, providing an opportunity for the Grand Prix winner to participate in such a program. These global aims are in line with the global strategy of Nissan Motor, which organizes and presents the award.

The coronavirus crisis, however, has restricted foreign travel and upended the accepted picture of artistic success, which usually involves an artist winning international renown and putting on exhibitions in one country after the other. Questions are being raised, not only about when we will be able to travel freely again, but also about whether things should go back to normal without us reflecting on whether globalization has gone too far. With our system of values in flux, the exhibition had to step back and, while reflecting the particular concerns of our age, face the fundamental issues of human life – as expressed by Fumio Nanjo: “Art and culture are extremely important for us, no matter how difficult the circumstances of our time. It helps us think about questions such as what the conditions or proof of being human are.”

Lawrence Rinder, the former director and chief curator of the Berkeley Art Museum and Pacific Film Archive, strongly emphasized that art, which has always been a reflection of its time, is a powerful means for humanity to grasp its fate, and an essential contribution to our global culture and society.

“This edition of the Nissan Art Award was a very special one. The finalists’ work revealed the current global situation, vital themes, and the importance of artists in the context of the present crisis. But above all, this edition of the award conveyed more acutely than ever a sense of the things that make us human.” (from the Statement by the International Jury) 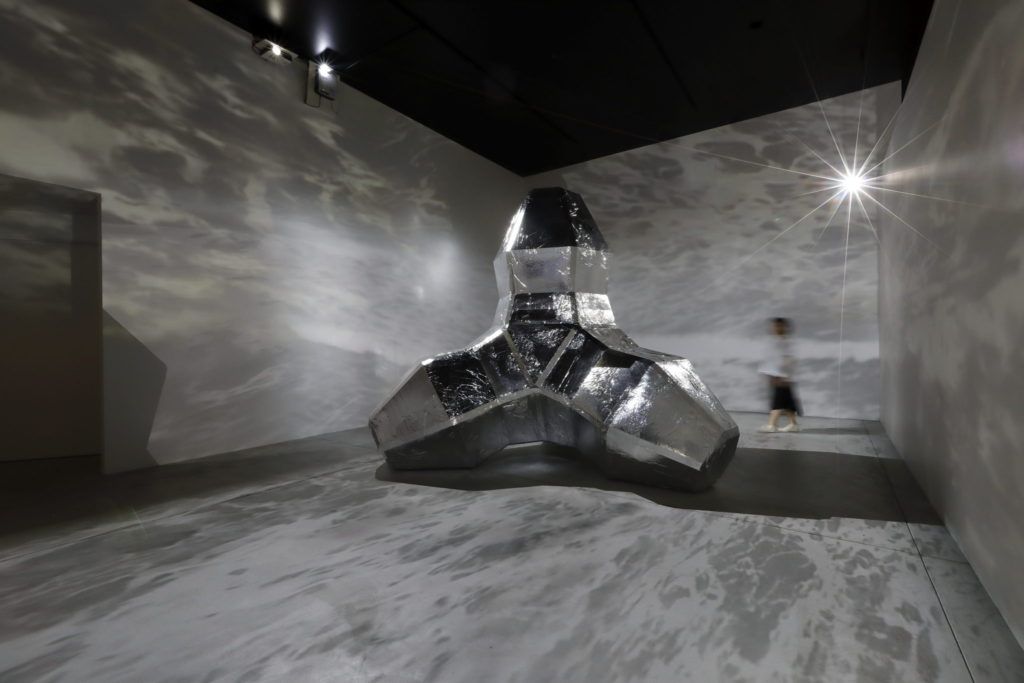 Let us now look at the actual art displayed at the exhibition.

“where are you now” by the Grand Prix winner Ishu Han is an immersive installation set in a space where shadows of waves move about around a sculpture in the shape of a huge tetrapod, which is accompanied by two video pieces. The tetrapod, positioned as if to close off the space, is covered with the kind of emergency sheet used in disasters and evacuation situations. Video of a lone tetrapod drifting in the dark sea is played on a screen on the wall, while a clip on another monitor in the back corner depicts Han, dressed as a security guard, struggling against raging waves in a scene of confusion. Having moved to Japan from Shanghai with his family at the age of nine, Han’s past works have often been themed on his own identity. The feelings of solitude and conflict he feels when pursuing personal issues seem to sync directly with our mood as we live out the coronavirus pandemic. As the jury notes, Han’s work “succinctly yet vividly visualizes the feelings of confusion and solitude rampant in current society, transforming a personal experience into a universal and poetic statement. It very successfully interweaves a rich sensibility into an incredibly minimal form of expression, inspiring the viewer to reflect deeply and widely on problems.”

In a heartwarming moment at the awards ceremony, Han apologized for having made his family endure him creating giant sculptures in their small home – a suggestion that art is not a privileged endeavor, but something intimately connected to daily life. That attitude is part of what makes this artist’s pieces so strong. According to Nanjo, “Han’s way, and feelings, of life are imbued into his work, from which they seem to rise to the surface.” The jury’s decision to present Han with the Grand Prix appears to encourage us to accept the uncertainty of our current position and the fact that we’re all in the same boat, and as such feels very honest.

The five 2020 finalists were selected at a first, materials-based round of judging in May 2019 from among 28 candidate artists, who had been chosen by a panel of nominators with varying backgrounds. While nobody could have been able to foresee the situation we now find ourselves in, it is probably not a coincidence that only artists pursuing themes that in one way or the other relate to our current state of affairs were chosen. Jean de Loisy, director of the École Nationale Supérieure des Beaux-Arts, puts it as follows: “Regarding the importance of the subjects that have been raised by the artists, regarding the importance of poets in today’s crisis, I think that the meaning of this prize is stronger than ever [when expressing] what it is to be a human being. Not in front of nature, not in front of history, but among nature and among history, among all lives.” All of the finalists’ efforts expressed a dedication to the creative process. Their efforts crisscross the world in both micro and macro ways, each with their own unique methods. 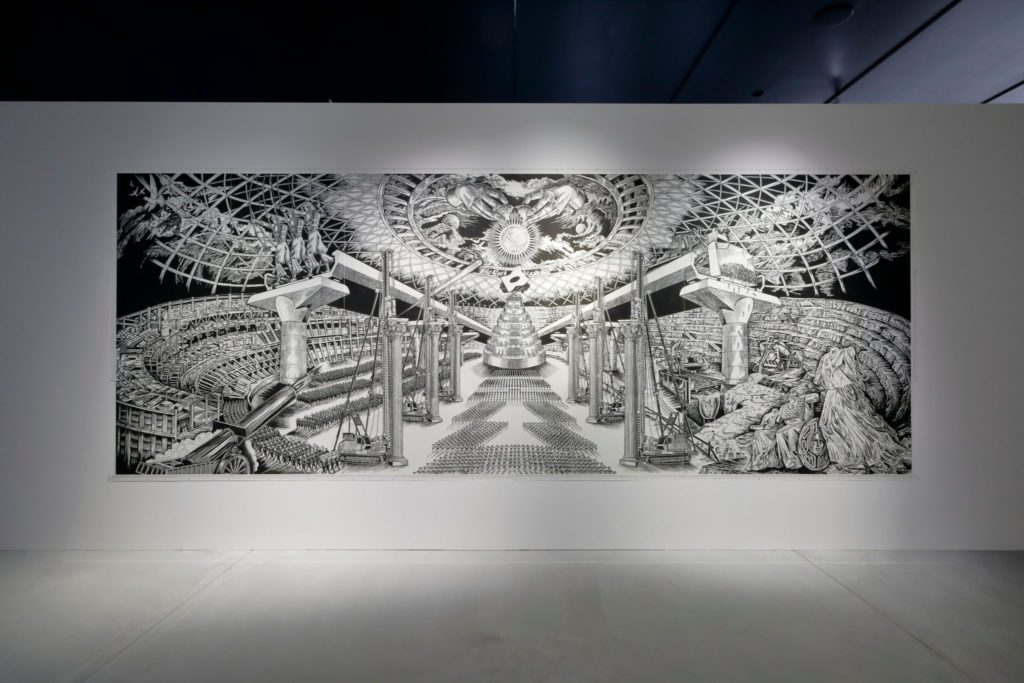 Sachiko Kazama uses the technique of woodblock printing to explore the roots of present-day phenomena, creating satirical works in which reality and fiction intersect. At this exhibition she displayed a giant woodblock print entitled “Dyslympics 2680” – a play on the 2020 Tokyo Olympics. Its overwhelming amount of hand-crafted detail strikes the viewer with force, and was highly rated for demonstrating the relevance of woodblock printing as a contemporary means of expression. According to Rinder, “The dynamic woodblock print weaves together history, psychology, fantasy, and a contemporary event, revealing the artist’s astute insight.” Meanwhile, Kazama’s “COUNT ZERO” – a page-a-day calendar that starts from zero – expresses the void left by the loss of the 2020 Olympics. 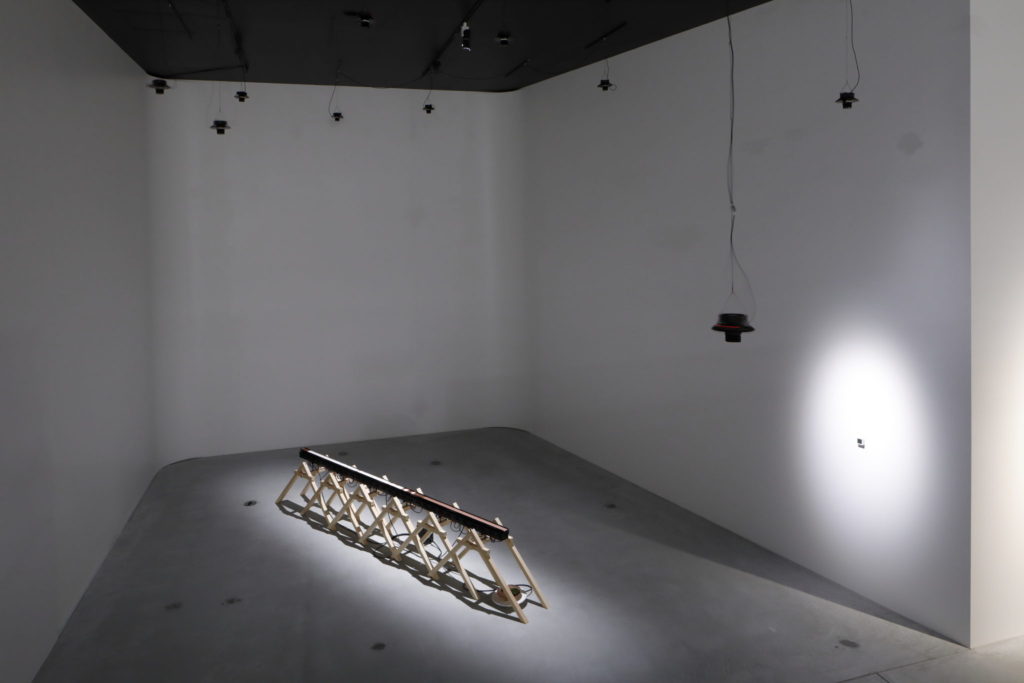 Taking materials as diverse as radiation, rainbows, wind, microorganisms, and air currents as his motifs, Soichiro Mihara’s practice combines natural phenomena with media technology. This time he created and exhibited a system that makes visible the three states of water – solid, liquid, and gas – that exist within the exhibition space. “Res nullius,” the title of the artwork, is a legal term that refers to rivers, wild animals, and other natural things that are not owned by anyone. Small in size but large in meaning, it touches on issues such as global climate change and environmental destruction. For Rinder, Mihara’s piece was “like a 20th-century Zen garden, which fuses a high level of scientific sensitivity and technology with poetic and spiritual elements.” 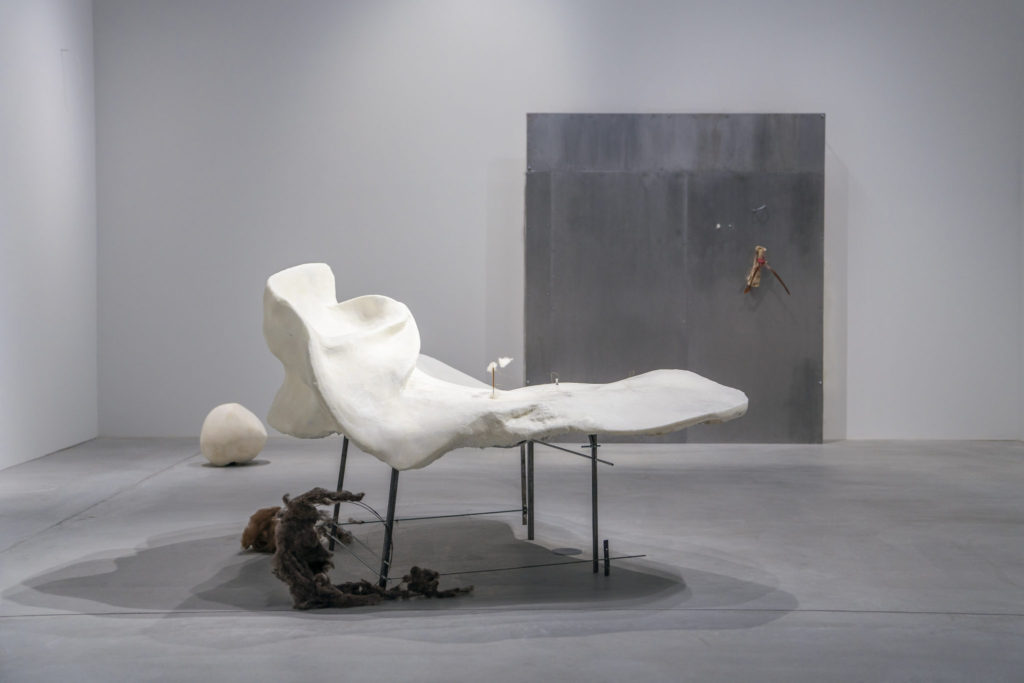 Rated as the most mature of the finalists and the artist who created the highest-quality overall display at the exhibition, Nobuko Tsuchiya makes use of everyday objects and scrap wood as well as industrial materials such as fiberglass and metal plates in her art, “pruning them like a gardener” (Loisy). The poetic installation she created was like the landscape of a distant civilization, something straight out of science fiction. Tsuchiya’s form of expression, which stimulates the viewer’s imagination, was described by Nanjo as “an expressive language of her own, with an extremely rich vocabulary.” He added that “creating new languages is important when it comes to contemporary art.” This meditative piece, in which nature and civilization coexist peacefully, captures the universal value of seeing. 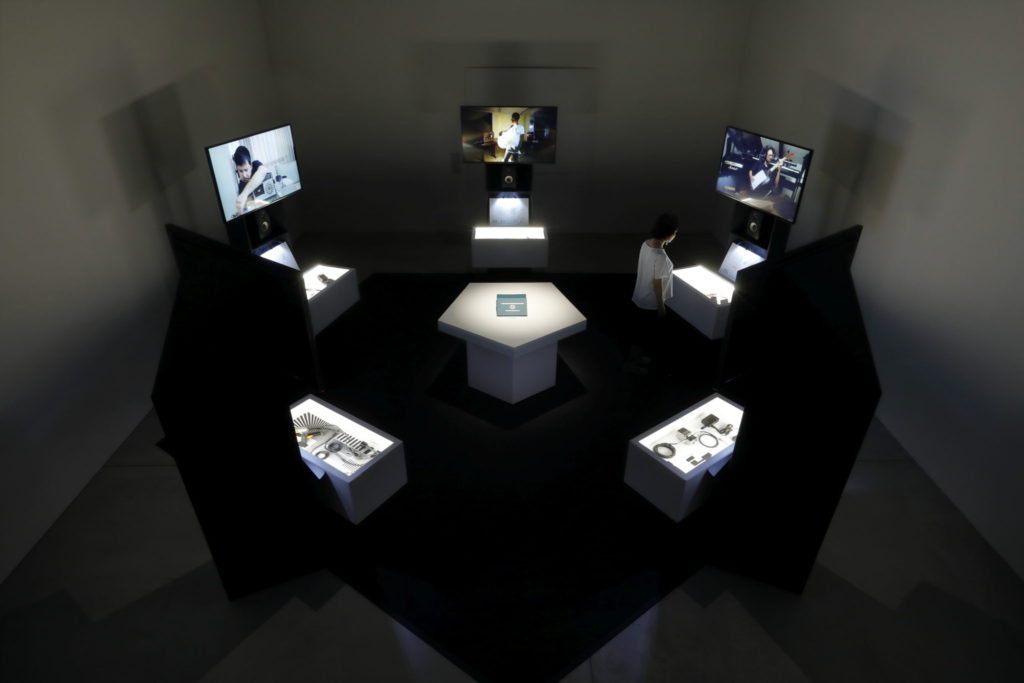 Ei Wada turns old electronic devices into new musical instruments and invents new ways of playing them, carving out a space in between music and art. His submission, a documentary called “ELECTROMAGNETIC ORCHESTRA WITHOUT BORDERS : pre-era,” was played on multiple screens at the exhibition. It documented the process of sending parts and a manual he had written himself and titled “Guidebook to Electromagnetic Instruments” to five of his virtual friends and collaborators, all in different countries, who would then procure secondhand electronic devices locally and go to work making instruments and playing them. The piece stood out for its interdisciplinary nature and fresh, cooperative approach. Its focus on watching people attempt to play instruments on screen feels prophetic now that live streaming has taken the world by storm. Ute Meta Bauer, the founding director of the Nanyang Technological University (NTU) Centre for Contemporary Art Singapore and a professor at the NTU School of Art, Design and Media, praised Wada for his “playful stance full of originality and ingenuity, which draws on a universal artistic spirit reminiscent of Nam June Paik, Atsuko Tanaka and the rest of Fluxus – the performance of which takes art into a wider public sphere,” and smilingly invited him to perform in Singapore too.

Lastly, Suhanya Raffel, museum director at M+ Hong Kong, described the online judging process as “difficult, because not being there and trying to understand the works in the exhibition space is very difficult, as it was so hard to ‘feel’ the sense that artworks emanate when you are looking at them in person.” However, she also emphasized the importance of persevering: “This affirmation is important and vital to ensuring the purpose and value of art and artists’ work, which are central to our communities.”

The judging process itself appears to have been challenging, and creating the art and preparing an exhibition for it while constantly planning for the unexpected must have been tough. In that sense, the fact that this year’s Finalists Exhibition was held at all merits unreserved praise. The artists were also reportedly grateful for and relieved to get the opportunity to work toward something concrete during such a difficult time. And for the audience, each one of the pieces displayed provided the courage to keep going toward the unknown. While other exhibitions and events were being cancelled or postponed, the Nissan Art Award 2020 was held as planned – a strong indication of the trust placed in art.

In a time when intolerance is on the rise, I hope that this exhibition will continue to function as a platform for diverse values and viewpoints. As for the Nissan Art Award itself, rather than becoming an exercise in authority, I hope the process will remain a flexible one that takes on new challenges and grows together with the participating artists, continuing to play a significant part in the contemporary art scene.