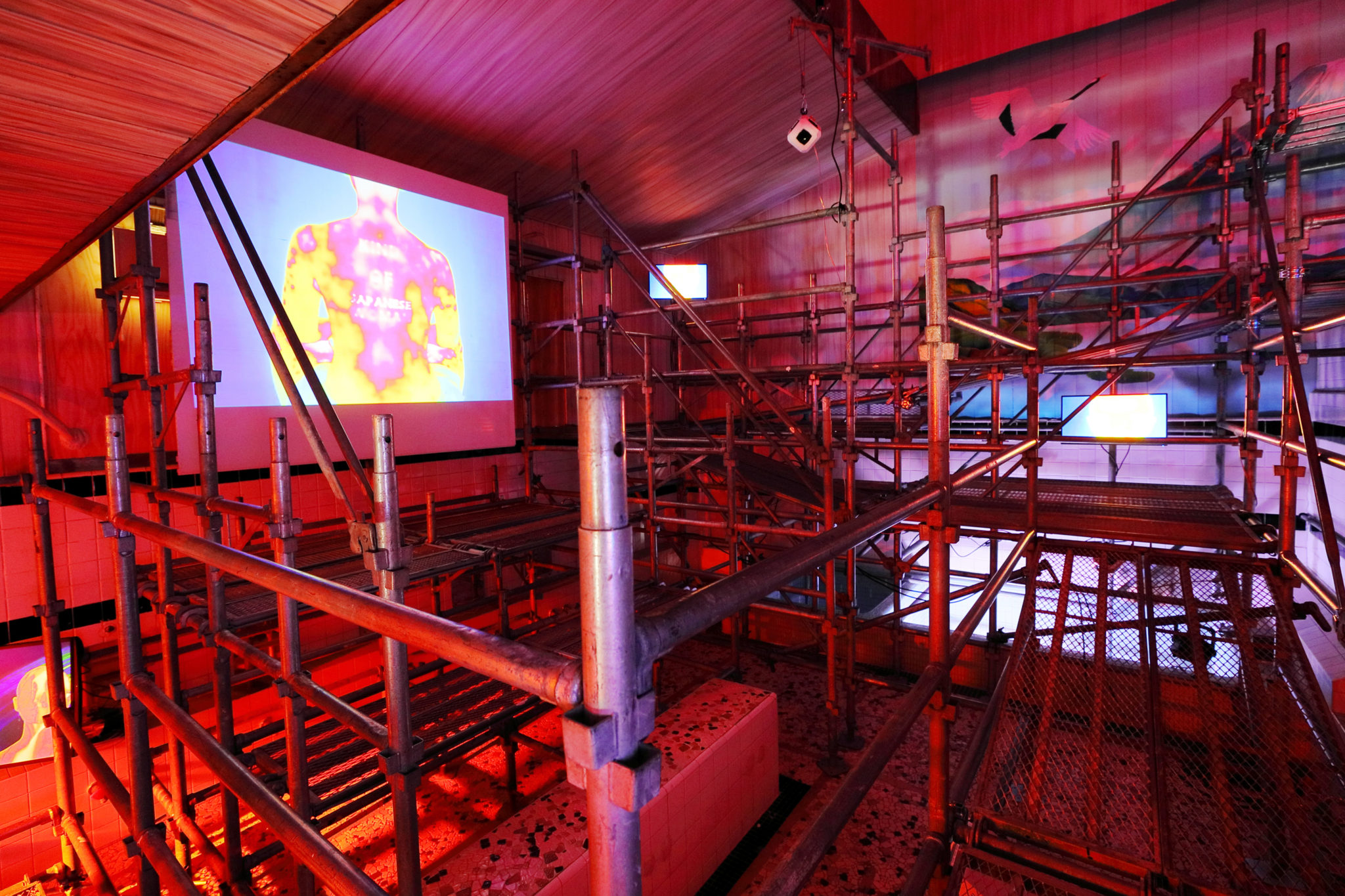 The third edition of the Reborn-Art Festival, a comprehensive celebration of art, music, and food held in and around Ishinomaki – a city that suffered significant damage from the Great East Japan Earthquake and Tsunami – is taking place in this tenth-anniversary year of the disaster. The festival is held across two seasons, Summer 2021 (August 11 to September 26) and Spring 2022, with the former program curated by Kenji Kubota. Across its run, the festival’s theme is “Altruism and Fluidity”. 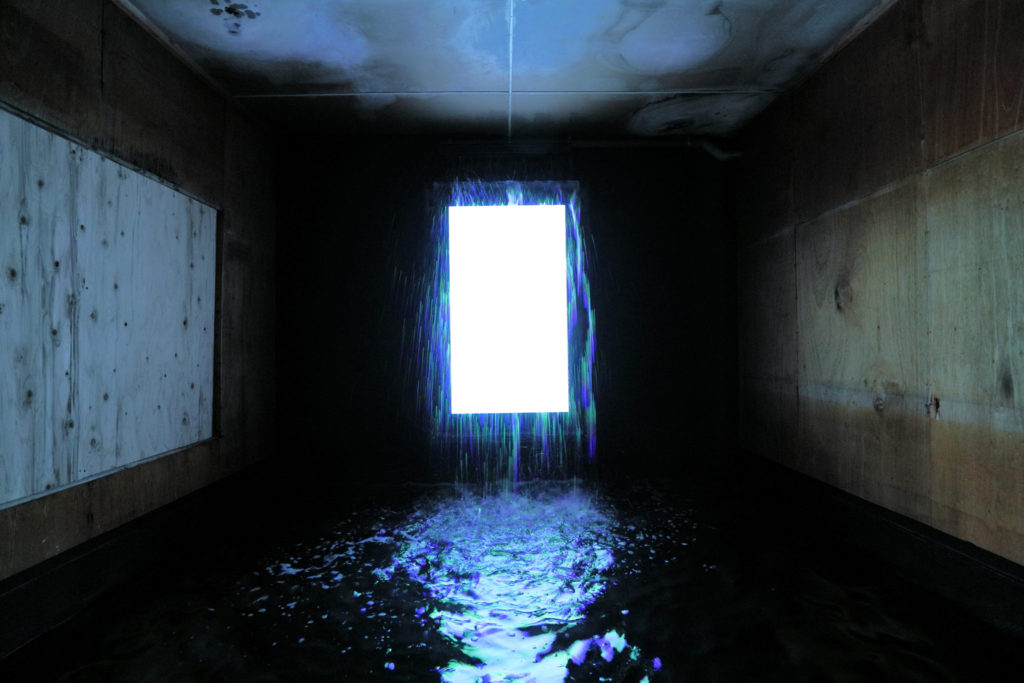 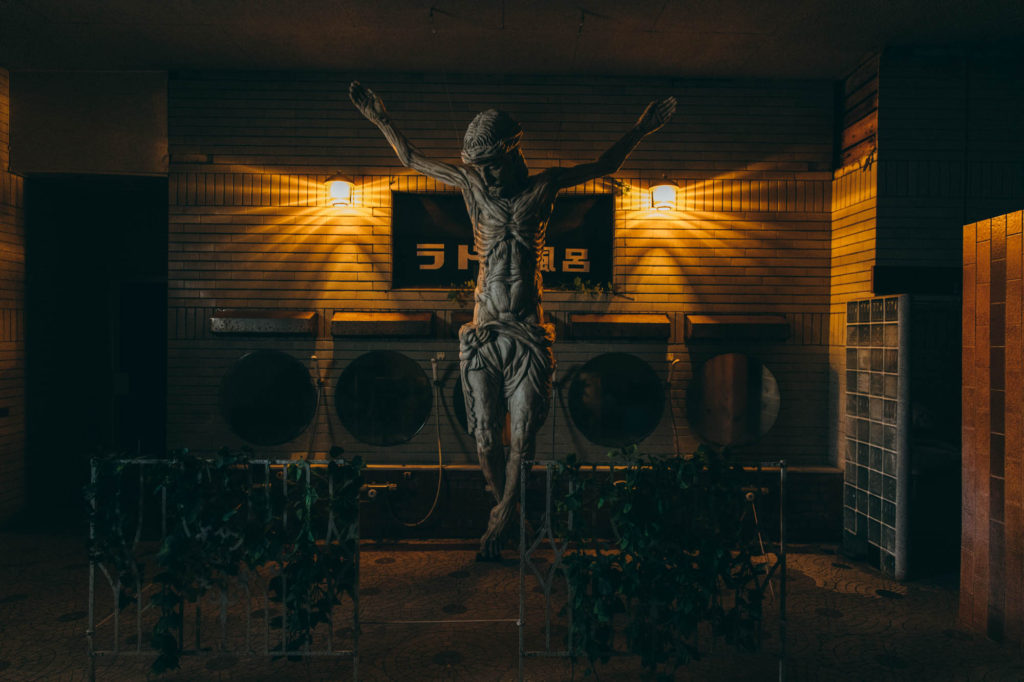 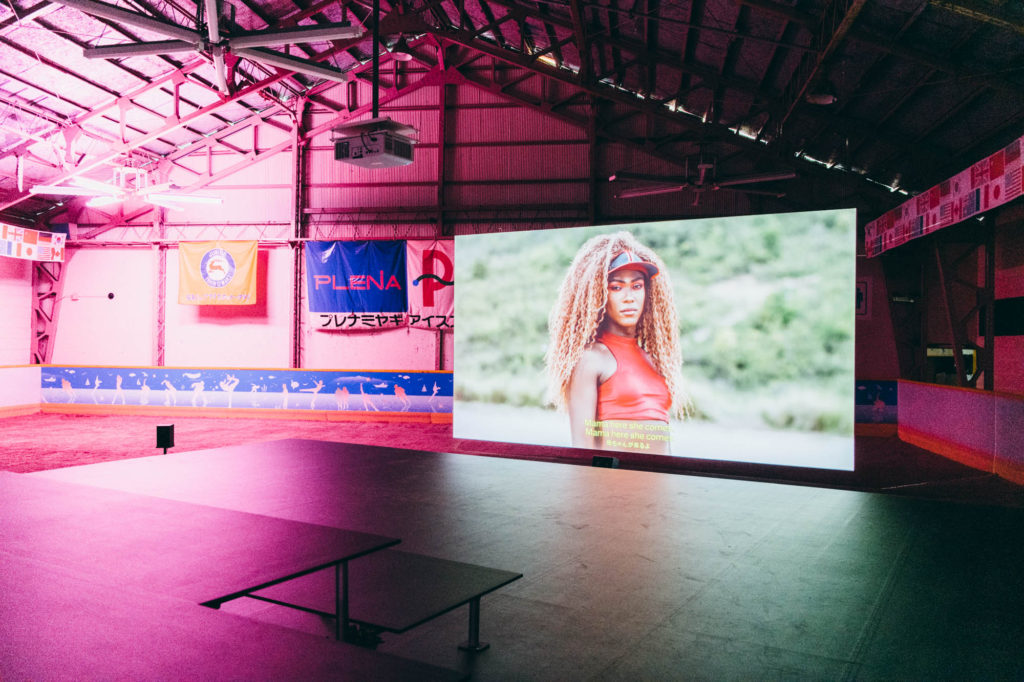 Art is exhibited across five zones, from central Ishinomaki to Onagawa, a new addition for this year, as well as on the Oshika Peninsula. In the Ishinomaki area, several locations with a close connection to the local community are being used as festival venues.

HouxoQue, inspired by Jean-Auguste-Dominique Ingres’s “The Source,” employs the circulatory medium of water to evoke both innocence and the cruel memories that water brings up in this very place. An artwork by MES makes visible the difference in temperature between warm water and circulating blood, capturing sighs that trickle forth in three-dimensional form. The Sapporo-based Ainu and Japanese artist Mayunkiki contributes a piece called “SIKNU” – meaning “to live, not to die, to save a life, or to come back to life” in the Ainu language – in which she engages in dialogue with her mother, thereby resuscitating the life of her Ainu mother and ancestors in her own body.

Furthermore, the series of self-portraits by Mari Katayama, who had both legs amputated at the age of 9, not only lays bare the artist’s distinctive body but, through interaction with prosthetic legs and Katayama’s own objets d’art, speak to the curiosity us humans all feel toward our body, while touching on themes such as objectification, play, and narrative.

Yasuyuki Nishio’s “Crucifixion,” a giant Christ-like statue created with the artist’s signature inkoku chuzosculpting method that only involves pushing clay with his fingers, expresses human belief beyond any specific religious doctrine and overwhelms the viewer both with the enormous amount of time and manual labor required to produce it and with the way the artwork resonates in its distinctive location: a dim sauna that one enters naked.

And despite how difficult the pandemic made it for overseas artists to participate in the festival, Brazil’s Bárbara Wagner and Benjamin de Burca have managed to contribute “Swinguerra,” an ensemble film themed on racial, sexual, and economic inequality, which is being displayed in installation form at an ice skating rink closed for the summer. The depiction of immigrants, foreign laborers, and youths with new identities hanging out around facilities much like this one in regional cities is a common sight. 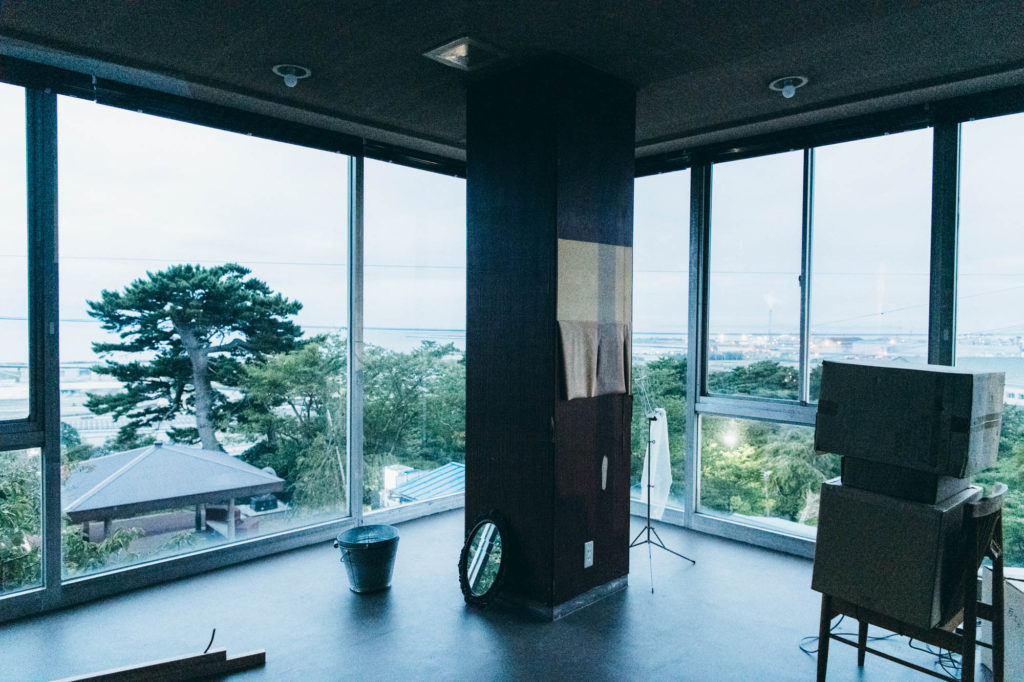 In topographic terms, the artwork making the greatest use of Ishinomaki’s distinctive local characteristics is Yosuke Amemiya’s “Ishinomaki Thirteen Minutes.” A theatrical installation set against the scenery inside and outside the former Restaurant Kashima within the hilltop Hiyoriyama Park, it consists of a film contrasting Amemiya’s current home city of Berlin with Ishinomaki, where his artwork is displayed; the time before the Great East Japan Earthquake with that after it; and reality and fiction before and after the Covid-19 pandemic, while also capturing how Amemiya tattoos the characters “Ishinomaki” – written in a self-made letter based on his mother’s handwriting – onto the palm of his hand. This gives rise to a unique perspective on time and memory, in which the act of marking an event by tattooing it onto one’s body functions as a paperweight for one’s memories. This in turn harmonizes with the summery view from Hiyoriyama, which reveals the construction done along the coast in Ishinomaki, resulting in a sentimental and brilliant artwork. 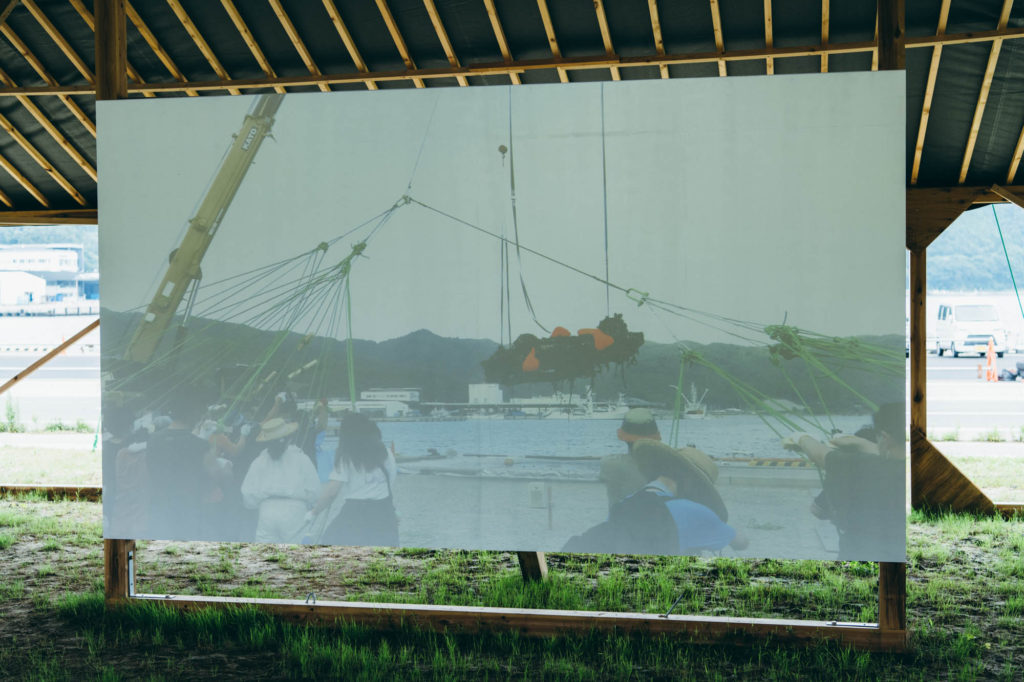 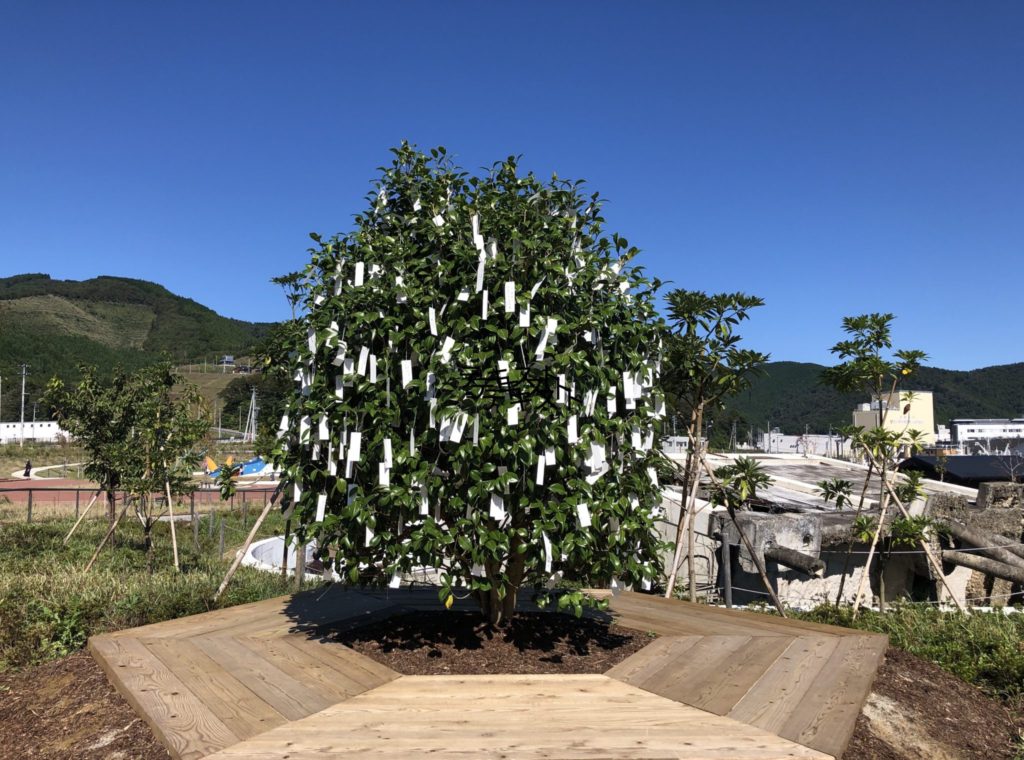 Elsewhere, the Onagawa area – noted for its new Shigeru Ban-designed station building and an approach to urban planning that does not include seawalls – features a sculpture “The Non-Thinker” by Makoto Aida in front of the station and another work “Wish Tree” by Yoko Ono on the oceanfront. Tsubasa Kato, whose work “Surface” focuses on the process of erecting and pulling down huge structures with large groups of people, contributes a piece in which some 100 local residents work together to salvage cars left in the sea after the tsunami from the ocean floor. His work appears like a metaphor for bringing up, once again, memories of the disaster in Onagawa, where the scars of 3.11 are disappearing. 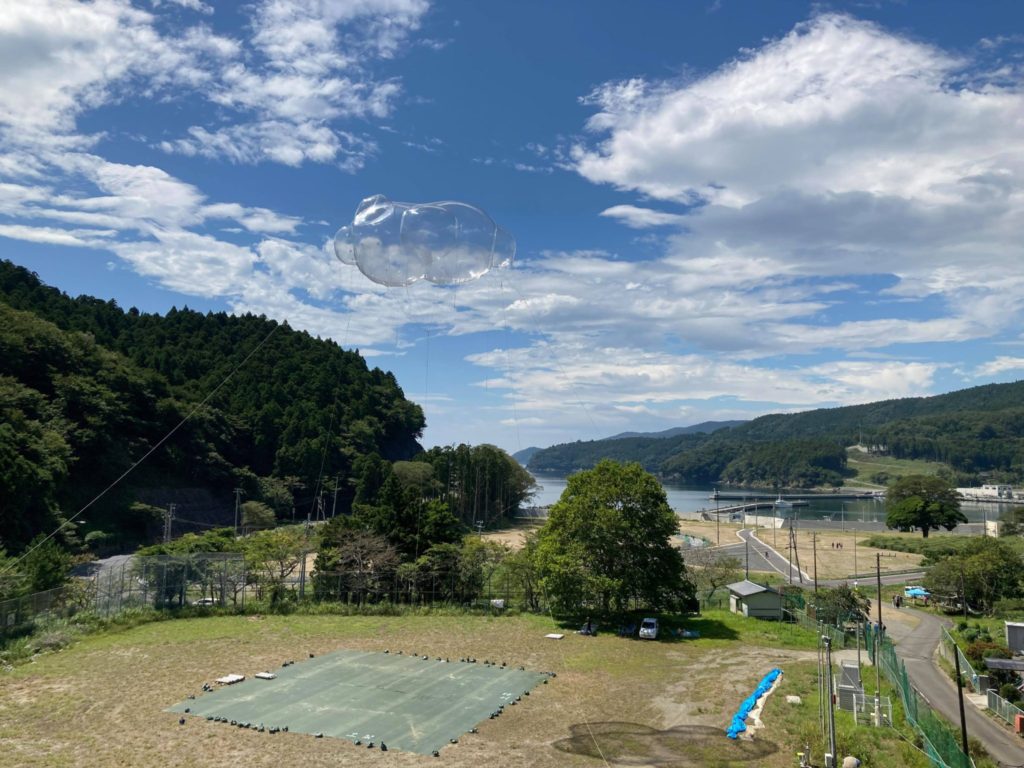 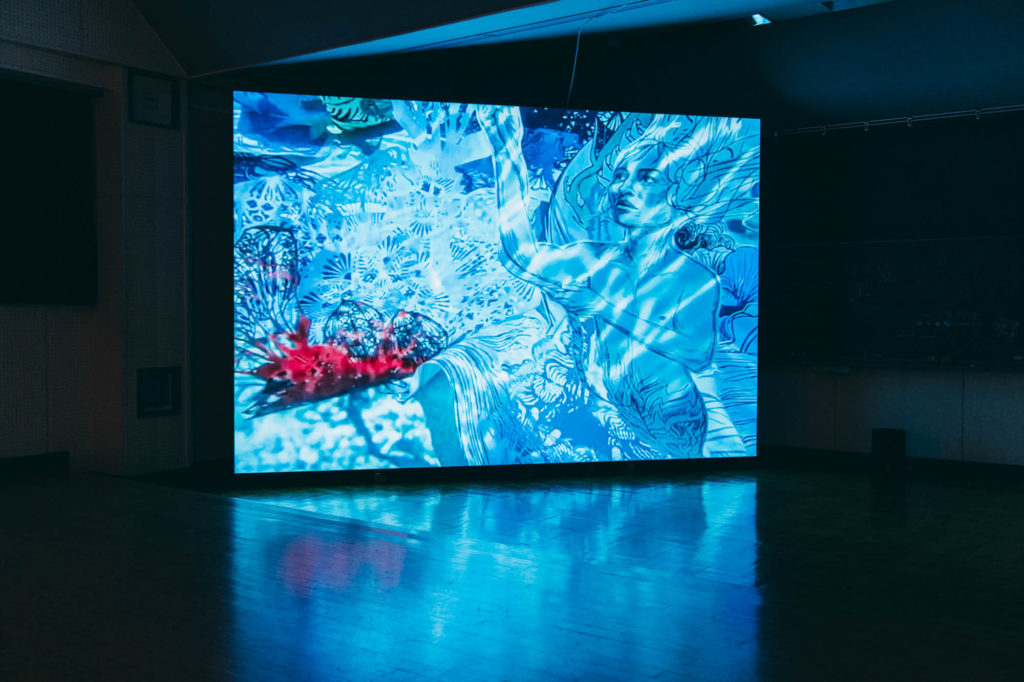 In the gymnasium of the former Oginohama Elementary School in the Momonoura area stands “forgive,” a giant installation by Chie Morimoto x WOW x Takeshi Kobayashi, which envelops the viewer with sound and light. In the school building, Ai Iwane’s “Coho Come Home” is an installation featuring a narrative film that goes into great detail in capturing the time-honored relationship between local people and coho salmon in two of the species’ native rivers: the Mattole River in North America and Onagawa. This artwork, for which the artist conducted folkloristic fieldwork, is presented in a multi-layered manner that evokes how the two rivers are connected by the ocean.

Also on display on the other building of the former school are “HISSS,” an installation centered on a fiery serpent made with rubber flickers, its creator Saeborg employing her distinctive “modern-primitive” approach to write a new mythology; Taro Shinoda’s “Childhood’s End,” a giant balloon artwork that takes its title from Arthur C. Clarke and looks at reconstruction critically from a bird’s-eye perspective; and Swoon’s “Cicada,” which employs a sorcerous feminist perspective in exploring myths and femininity through grotesque but beautiful film animation. Finally, Shun Natsui’s “Breathing Waves” captures the many faces of the sea off the Oshika Peninsula, highlighting how the waves breathe and pulsate, laying bare the ancient relationship of coexistence between land and sea. 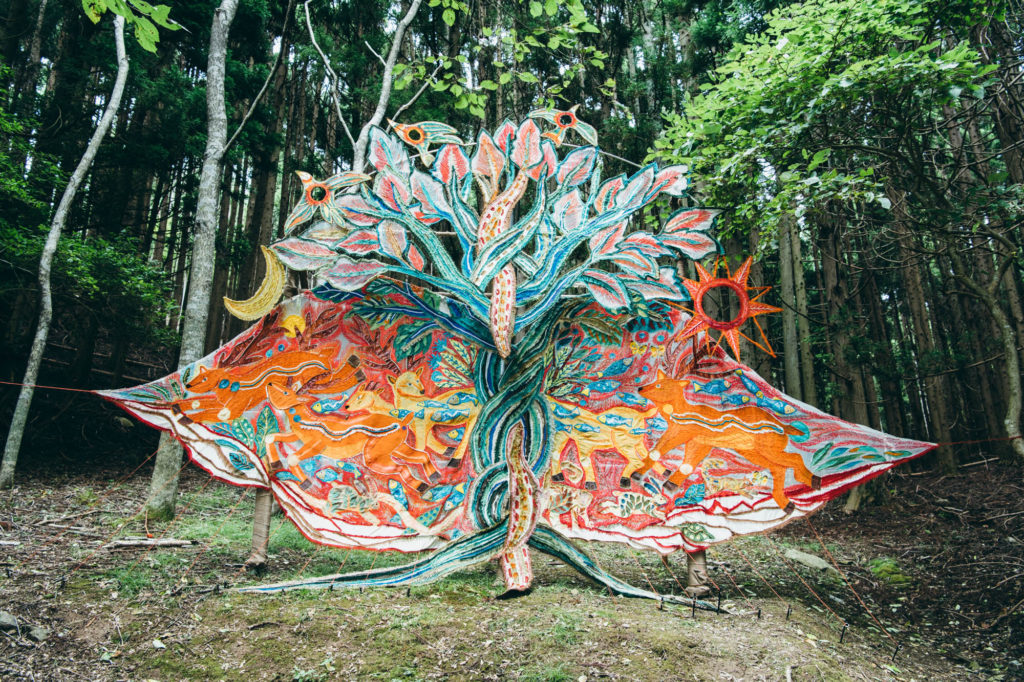 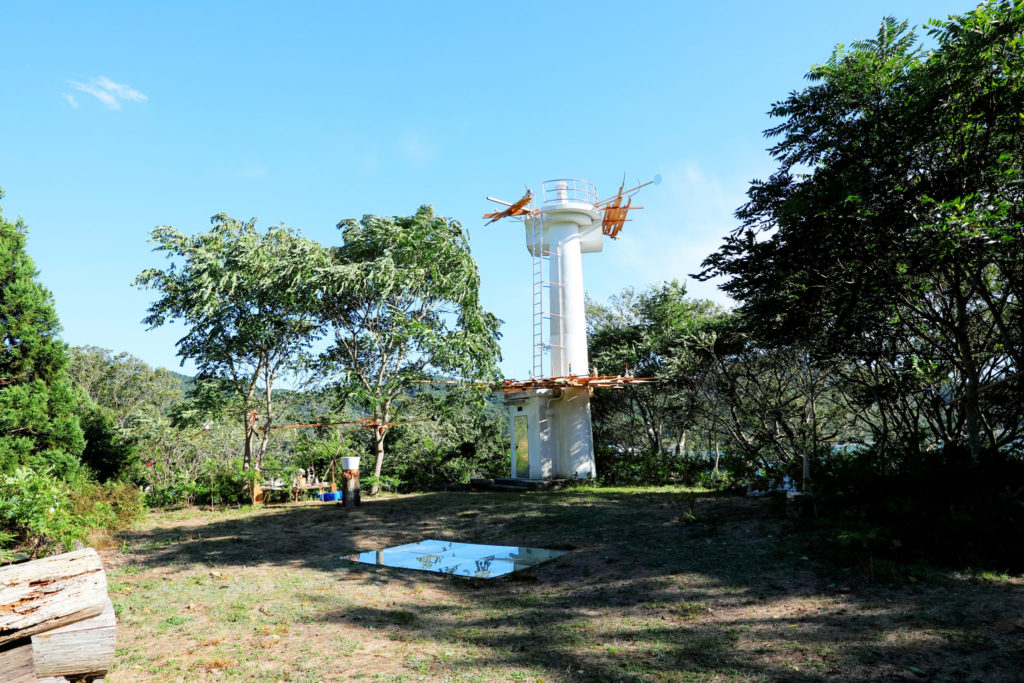 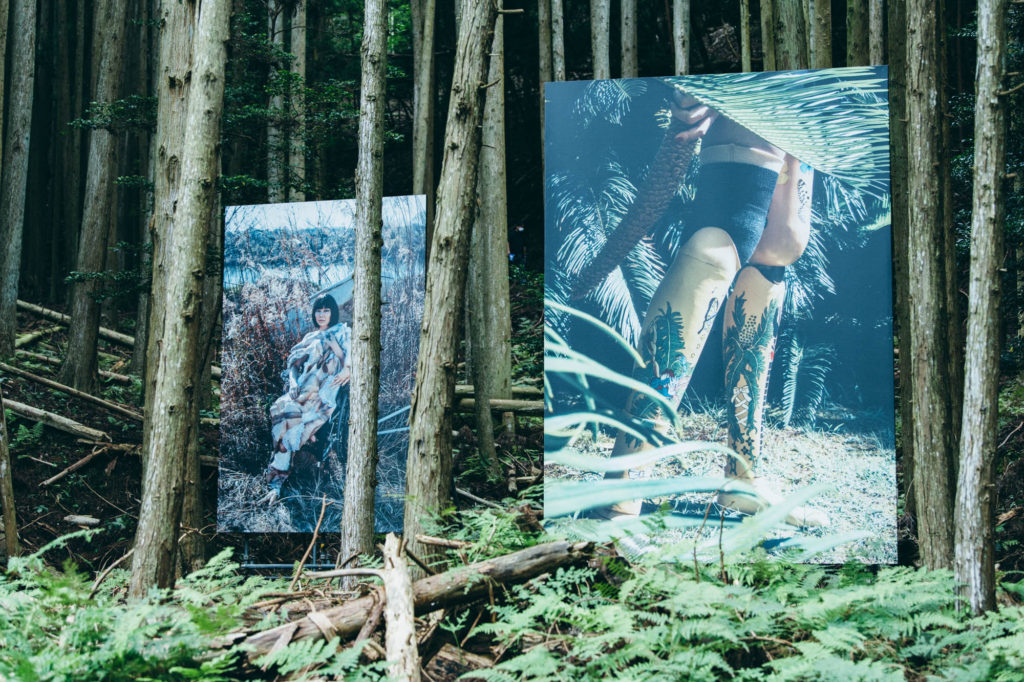 The day after the festival opened, a photograph from a series created by Mari Katayama on Naoshima, Kagawa back in 2016 and displayed in the Oginohama area was removed from the exhibition after discussion with the artist out of respect for the audience’s feelings, because for some local residents it “brought to mind the destruction wrought by the tsunami.” It’s clear that art festivals should not only be about appealing to the lowest common denominator by exhibiting artworks that make all viewers and local residents alike feel good. I hope this incident inspires discussion on the role of art displayed in public spaces using taxpayers’ money and on how artworks and artists should be respected. It’s a question of to what extent opinions and criticism from the public should be taken into account – something that also applies to the recent uproar surrounding resignations related to the opening ceremony of the Olympics – and it appears that we have seen the extent to which organizers and curators are able to protect artists. 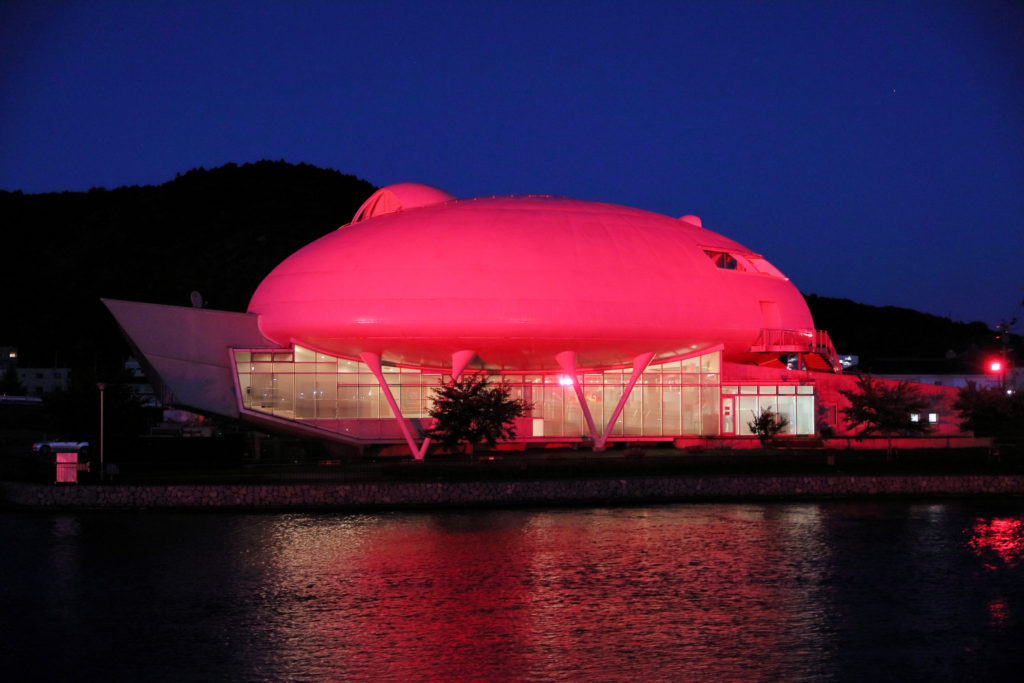 Kyota Takahashi《From me to you, I will send you this color light.》 Photo by Taichi Sato

Kenji Kubota is curating here for the first time, and his contribution makes this edition of the Reborn-Art Festival clearly different from its past incarnations. It gives off a fresh impression, pursues change without getting caught up in the usual art festival mannerisms, and aims to revitalize, all while revealing a glimpse of a unique sense of place that captures both the inherent dynamism of Ishinomaki, a trade and logistics hub, and the physical memories of everyday life in the city.

These aspects were made particularly salient by the choice of venues within the city. This selection goes beyond the mere securing of exhibition spaces such as vacant houses and former shop spaces, extending to sites like a community space where residents interacted with volunteers after the disaster (Sennin-buro), a former communal bathhouse, a former sauna facility, an ice skating rink, and what was once an observatory restaurant. These places, respectively, are facilities once intimately related to the day-to-day physicality of local residents; a sports venue that provides a space for a highly physical form of entertainment; and a former date spot and tourist attraction. They retain vivid traces of everyday physical activity, and the artworks displayed in them serve as media for reflecting the relationships between these spaces and the bodies of the past onto the relationships between those same spaces and us contemporary viewers of the artworks. It is as if the past and present realities come to mirror each other.

This drives home the fact that even us festival-goers, temporary visitors to Ishinomaki, are through our bodies connected to the city’s past and present realities. Even one-time travelers exist as factors influencing the city. This approach allows the viewer to feel a personal connection with Ishinomaki and its people, rather than peeking at them as “others.” And while the bodies of the past and present coexist in a structure of contrasts within the same space, the contemporary city keeps changing, breathing, through the efforts of its current residents and those otherwise connected to it. This linear and continuous timeline connects the past with the present, and suggests a sense of continuity into the future.