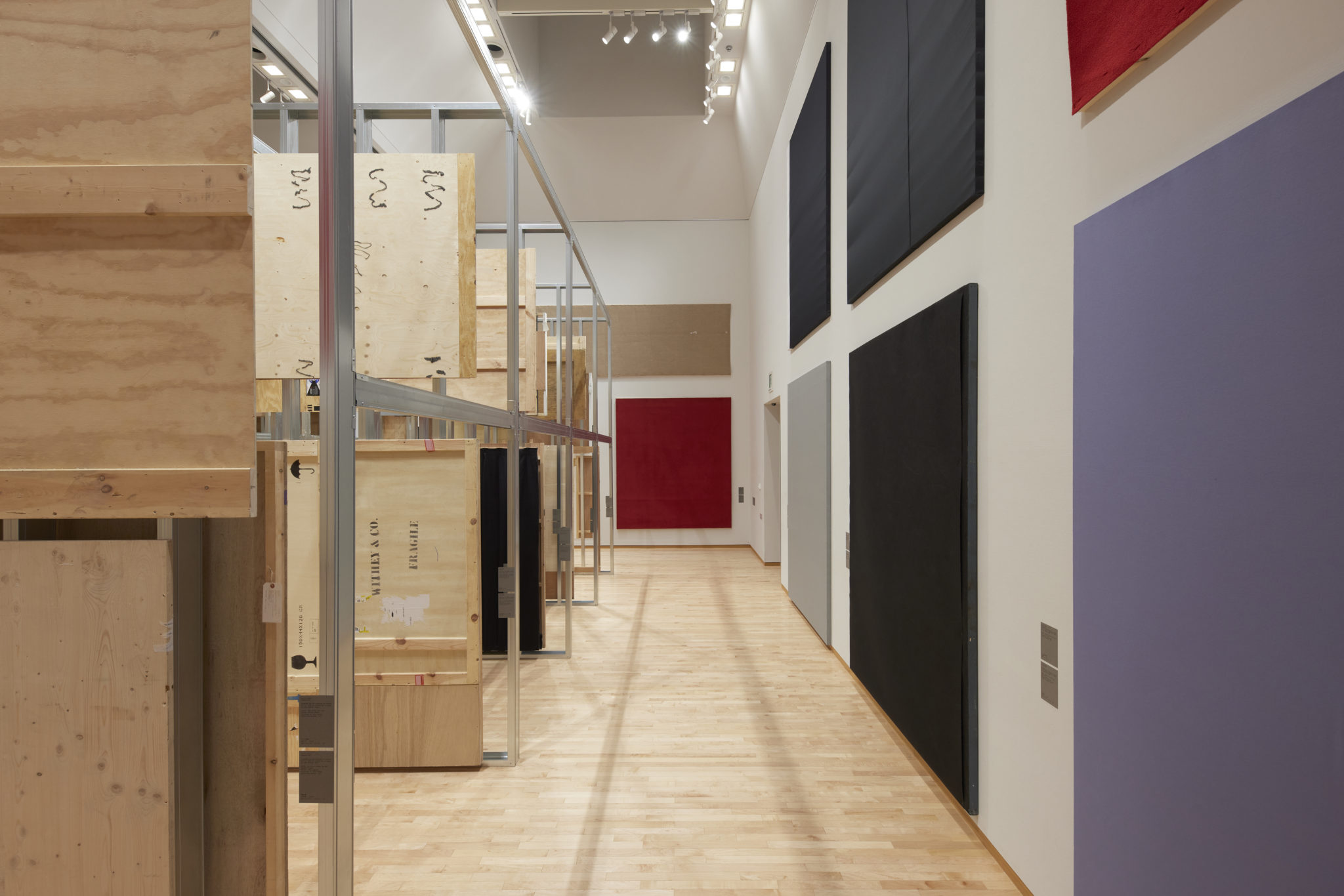 Organized by the Tokyo Metropolitan Government and Tokyo Arts and Space (TOKAS) at the Museum of Contemporary Art Tokyo, the Tokyo Contemporary Art Award 2020-2022 Exhibition features the work of Hikaru Fujii and Chikako Yamashiro, the winners of the second edition of the Tokyo Contemporary Art Award (TCAA). Established in 2018, the program is open to mid-career artists expected to make strides in the near future, including through activities aimed at audiences overseas. Having been in charge of interviewing the winners for the award’s official website, and having heard about their pandemic-induced difficulties in conducting research overseas and gathering large groups of people together, I was surprised and impressed by the results they had achieved with their creative activities, conducted under such challenging conditions, as presented at the exhibition. Also significant is the fact that two neatly bound monographs containing a record of each artist’s past and recent works, along with excellent articles critiquing these, have been published for the occasion. 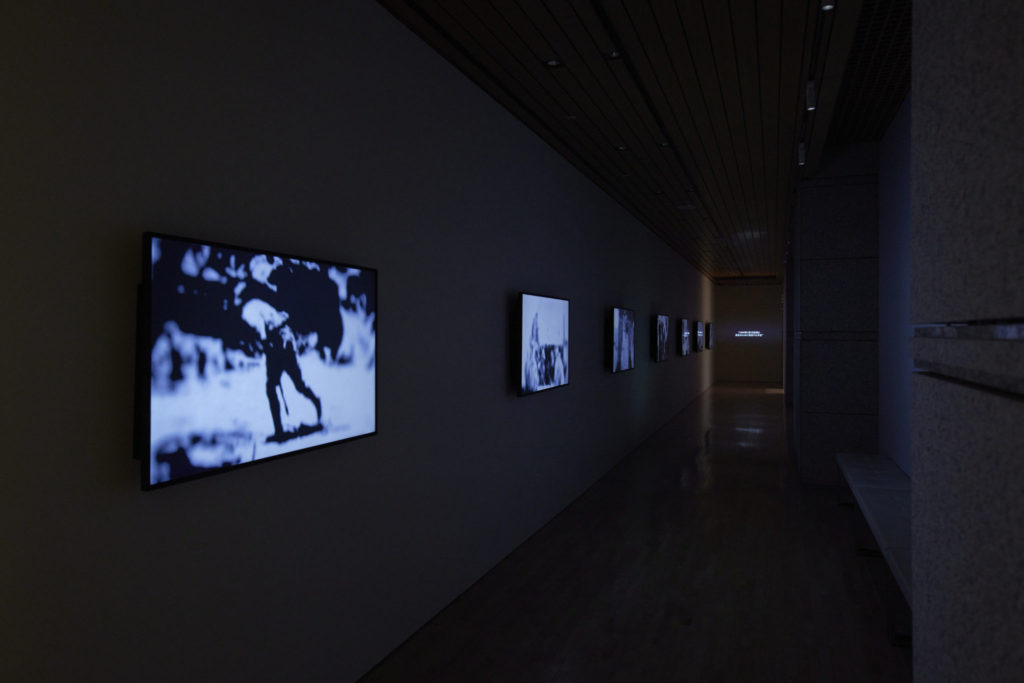 Hikaru Fujii’s new work is a study of paintings documenting the Japanese war effort that were created by some 100 artists who served in the military during World War II, and that were confiscated by the Occupation forces after the war. Fujii has conducted fieldwork in many parts of the world, but for this project spent his days in his studio, using an electronic microscope to pore over U.S. archival materials recorded on 1 cm-square microfilm.

In 1946, the documentary paintings were collected at the Tokyo Metropolitan Art Museum for the purpose of determining what to do with them, and displayed over 12 days for the Occupation’s military personnel. Were they to be preserved as cultural assets, shared with other Allied nations as trophies of war, or destroyed as malignant propaganda? The artistic value of the paintings was debated but no conclusion was reached, leading the works to be stowed away and left unattended for five years. 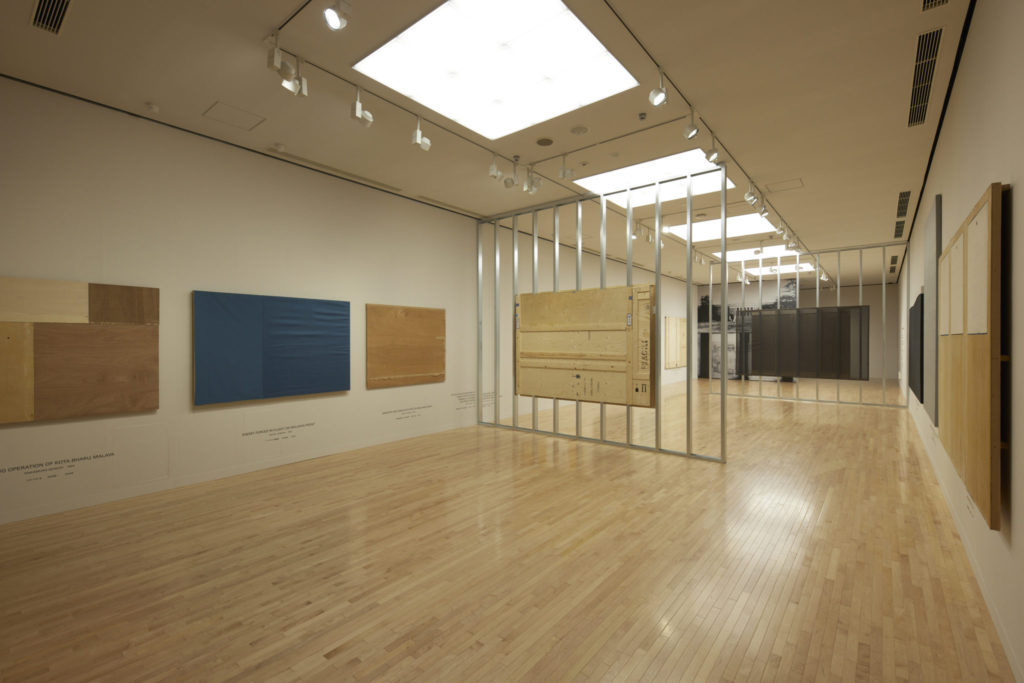 In a sense, Fujii’s exhibition is a faithful reenactment of that strange showing, whose value no one had been able to define. Upon entering the exhibition room, I was taken aback and felt flabbergasted for a while. Countless canvases filled the vast space, displayed both on the walls, and mounted on racks throughout the room. The surface of the canvases, however, was composed of various materials and packing supplies discarded by constructors and shipping companies. The captions included the names of artists and titles of works, such as Tsuguharu Fujita’s “Final Fighting on Attu,” but the “works” they described were flat, empty pages.

Of course, it was impossible to bring over the original war paintings, some of which are now on permanent display at the National Museum of Modern Art, Tokyo. Fujii’s intention was rather to “see the actual scale of the [1946] exhibition in full.” What this display of phantom paintings, faithfully reproduced only in terms of size and captions, reveals is the possibility of differing interpretations, such as subtle anti-war feelings and differences in interest and enthusiasm, stirred up through the artists’ names and the titles of their works. I interpreted Fujii’s challenging approach, which attempts to go beyond the “blank” exhibition method that so often ends up being clichéd, as both an original reflection on the ambiguous discussions surrounding the history of postwar Japanese painting and as an intervention into historical fact through artistic expression—a manifestation of his rebellious spirit.

Many contemporary artists to date have taken up the theme of wartime documentary painting in their work. Fujii’s contribution, seen against the backdrop of the “hybrid” war Russia is currently waging in Ukraine, where information warfare is having a significant impact on battlefield events, strongly draws the viewer’s attention to the complex and bizarre aspects of warfare in the 21st century. It urges us to employ the full force of our imagination to the urgent task of discerning and critiquing the invisible realities of war, which present themselves in the space between “eloquent and passionate forms of expression” and “deceptive propaganda.” 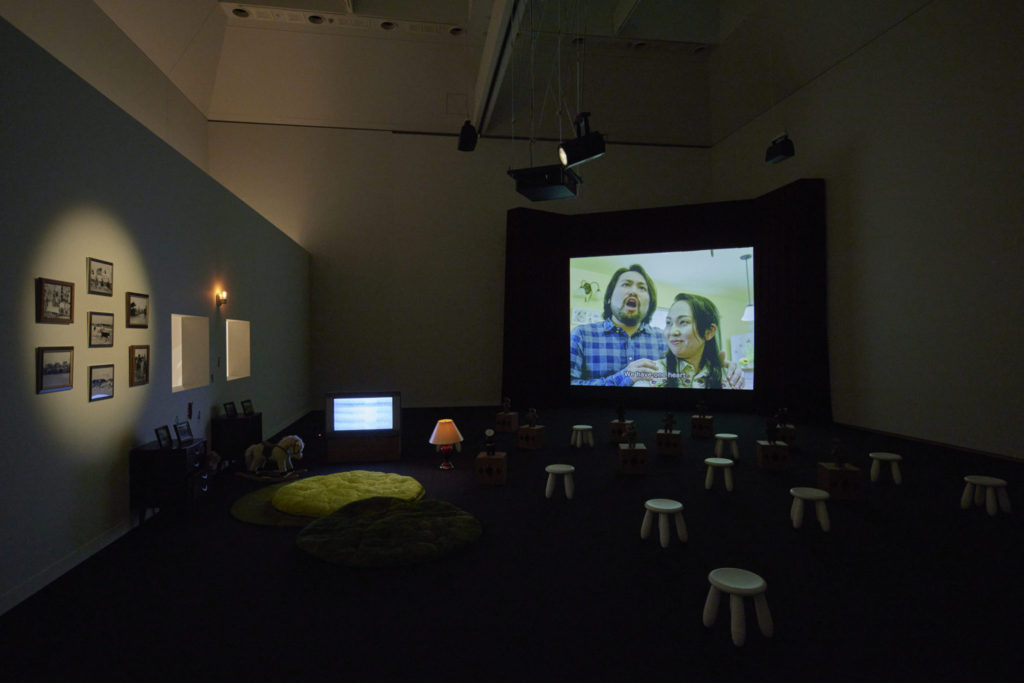 Despite not having been able to travel abroad for research, Chikako Yamashiro kept busy during the TCAA support period with a variety of tasks, including raising a newborn child, creating several new works, and putting on a solo exhibition at the Tokyo Photographic Art Museum last year. At the TCAA exhibition she presents four video works, including “A Woman of the Butcher Shop” (2012 version), shown across three interlinked screens for the first time in 10 years; “Chinbin Western : Representation of the Family” (2019), which incorporates the perspective of a baby witnessing foreign cultures through a television set up in its nursery; and “Anata” (2022), Yamashiro’s latest creation. 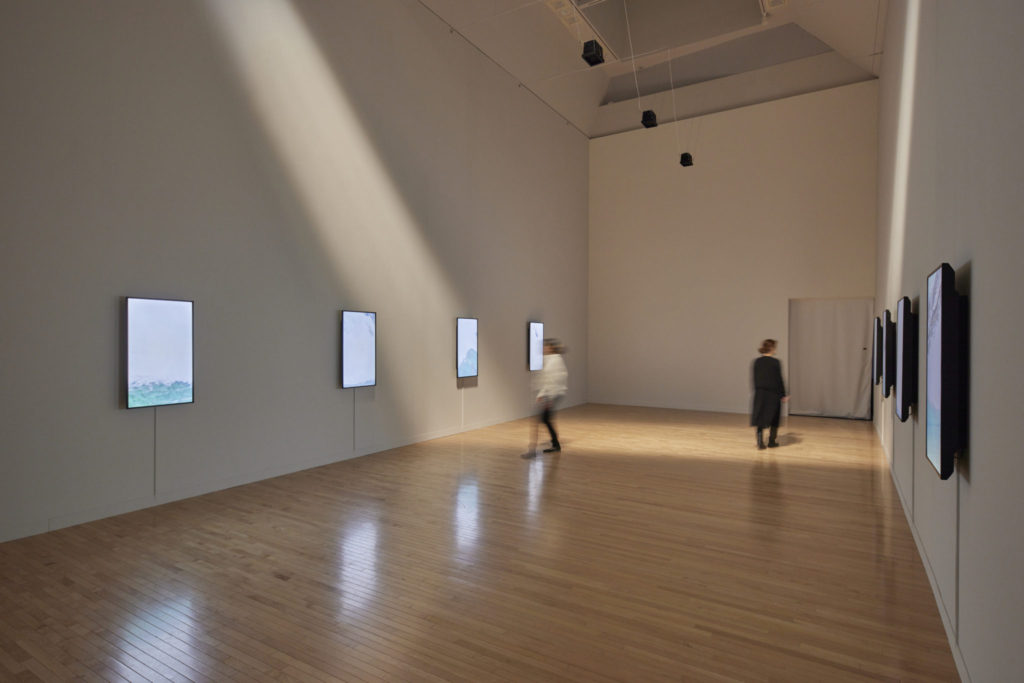 Her new video work comes in two versions, both of which capture the transformation and flow of a certain event from a fixed point of view in Okinawa, the artist’s birthplace and the origin of all her works. The eight-channel video installation was filmed on a tidal flat near Henoko in the city of Nago in 2021, after an underwater volcanic eruption in the Ogasawara Islands caused pumice stones to drift to shore across the archipelago. While crowds of people pass by on the beach in a blur, the artist’s elderly father strikes a solitary figure. According to Yamashiro, her father has recently become forgetful and tends to wander about aimlessly, and is finally starting to forget the memories that he, having experienced war, had tried to forget but couldn’t, the things he had tried to talk about but hadn’t been able to. She says that for the first time since the war, he appears to be seeing his home from a new point of view. 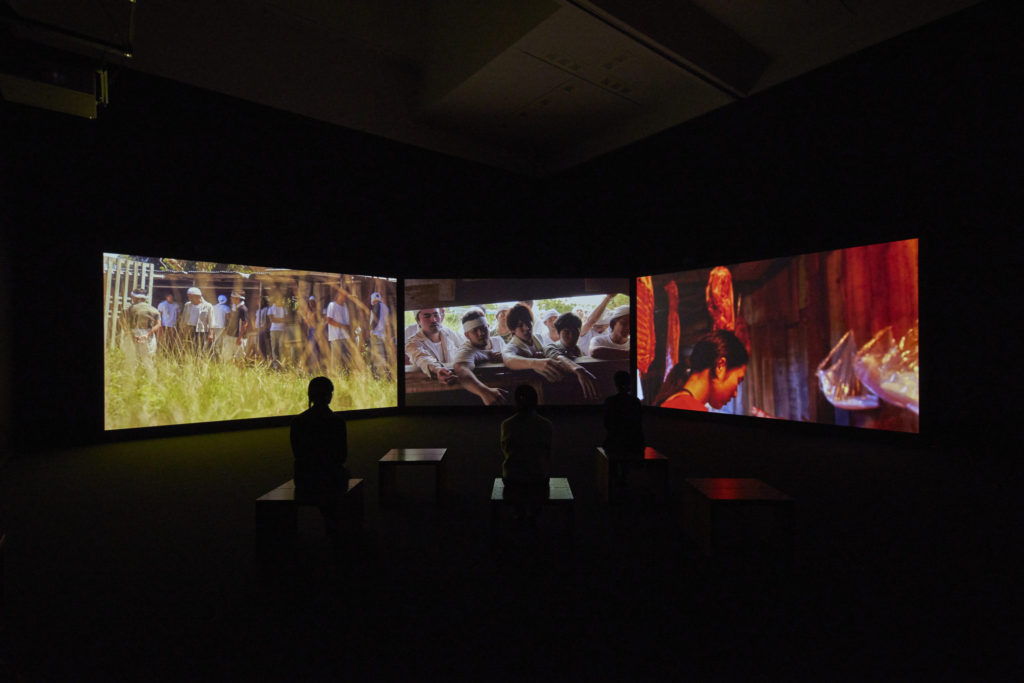 The other version, a single-channel work, is entirely fixated on detailed footage of the tiny pebbles that fill the waves. Reminiscent of the surface of a distant planet or a rising desert, the images evoke the fetal movement of the rugged earth and the beginning of a world about to be born anew. The worlds of the two “Anata” pieces, which resemble ambient music with an unprecedentedly high level of abstraction, suggest a power to quietly lift the spirits of those who have lived through harsh realities.

Meanwhile, “A Woman of the Butcher Shop” seemed even more striking to me now than back when I first saw it. I remember my initial viewing of the work as an intensely physical experience, but considering the way society has changed in the decade since, one notices what an incredibly earnest and robust piece of art it really is. Girls pass through a limestone cave to reach the sea. A hunk of meat washes ashore on a “tacitly approved” beach that was accidentally spared from development within a U.S. military base. The flesh is brought to a black-market butcher shop, where a woman cuts it up. Men engage in a wild scramble to get their hands on the pieces first, then grill and eat them. This work was inspired by Yamashiro’s childhood experience of being told tales of the fierce Battle of Okinawa while eating with her family, and the images that once haunted her (“flesh” sticking to the “voices” of others amplified within her stomach). There are those who take and those who are taken from, meat that’s eaten to survive and meat that’s digested to become flesh and blood, a voice that rises from deep within the body, and a body that inherits the experiences of others. The reality of life coexisting in such a relative manner now descends upon the viewer as ever more vivid red gravel.

In a world beset by a deadly and unpredictable disease and the scourge of hegemonic wars of aggression, the landscapes presented by Fujii and Yamashiro’s new works make us think of the unspoken wishes and emotions left behind by the wars of the past. There are things that art can help shake up in these times, and people do change—this exhibition made me want to whisper such a hopeful hypothesis.