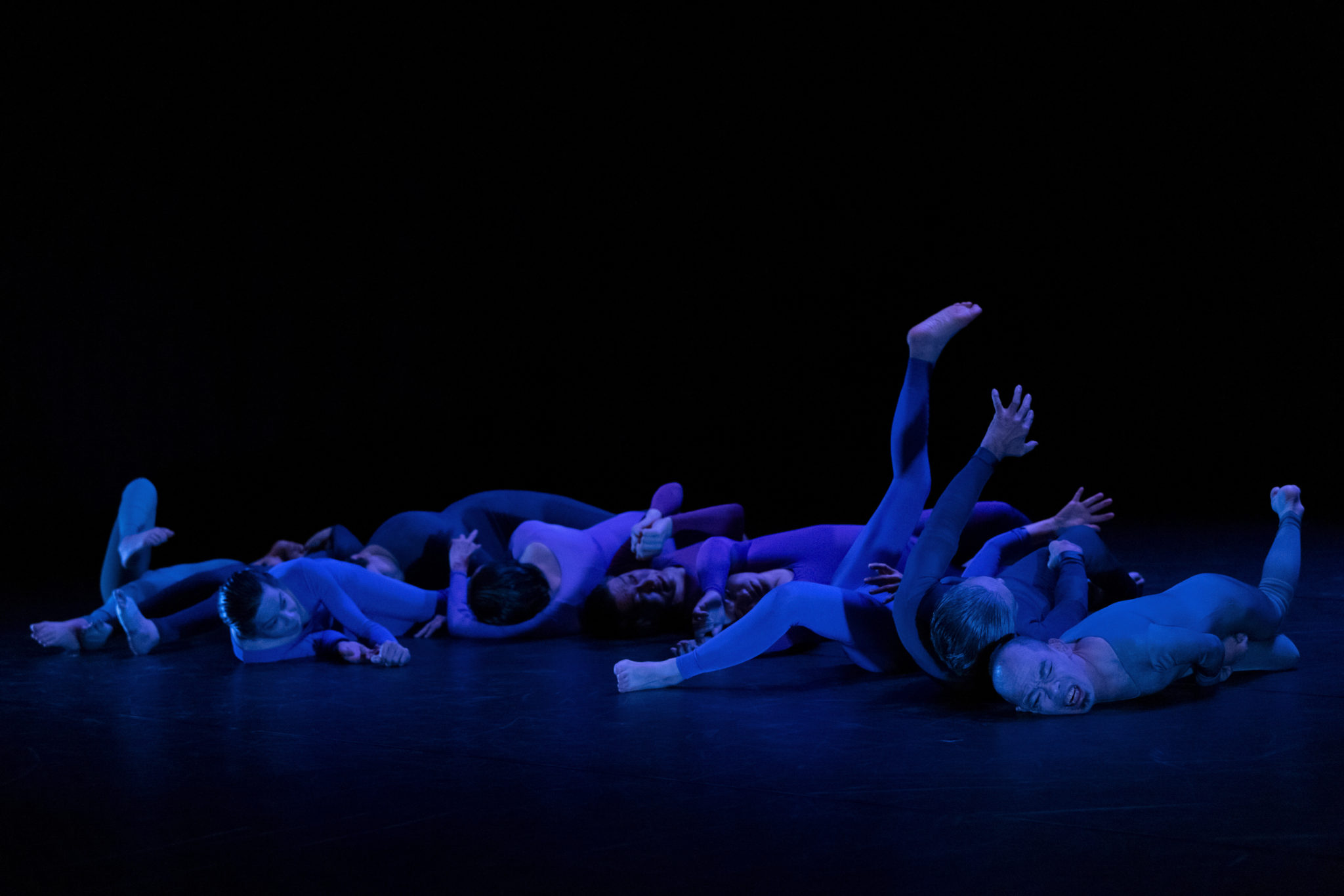 The event has changed quite a bit compared to when it sought to be a market or trade fair for the performing arts. On the other hand, the essence of its program, formed over a period of several years, remains the same despite the change from TPAM to YPAM. In a sense, the “market” has transformed into a meeting that now serves a steady function as a platform for interaction. Perhaps it should be said that the event program, which drives people to meet each other, has become established.

Among the main program categories are Direction, which consists of works selected by YPAM or co-created with commissioned artists, and Exchange, which makes good on the “arts meeting” part of the YPAM moniker, consisting of panels with presenters such as representatives of performing arts-related associations and grant organizations as well as artists, from both Japan and overseas. Finally, in the Fringe category, registered groups perform shows at a variety of theaters and other spaces.

Let’s take a look at a few of the performances given as part of the Fringe program. 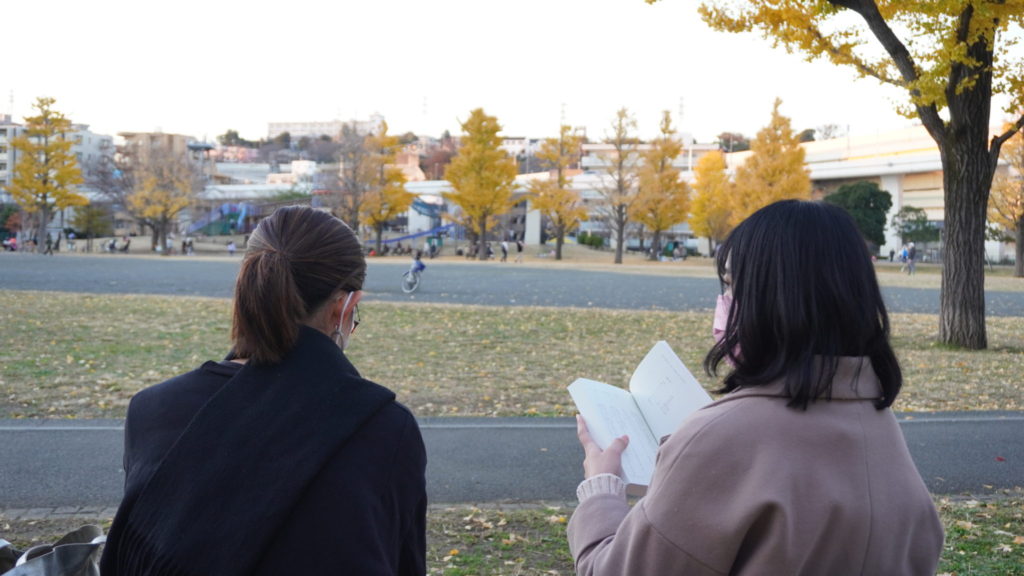 The Allergen Theatre’s “Fahrenheit Alliance” is a performance that sees the actors and participants get together on a bank of the Ooka River in Yokohama. Unless you live in the area, the location appears quite interesting. This is something different from the “strolling theater” style, which ended up being a short-lived fad.

While taking place in an epic, post-apocalyptic sci-fi setting in which people try to preserve the memory of the written word while books are being banned and burned, “Fahrenheit Alliance” intentionally keeps things small, employing the minimum unit of theater. Each participant brings with them one book they would like to preserve, and then engage in one-on-one sessions with the actors, who memorize the content. The performance is inspired by Ray Bradbury’s novel “Fahrenheit 451” and employs word of mouth as the method of memorization. As demonstrated by the tradition of oral literature, passing stories down by word of mouth—a most primitive way of going about it, unlike paper or digital data—is the oldest method of relaying information across time. Far older than letterpress printing, it has allowed stories to endure through rhyme and other mnemonic devices without reliance on paper. Records on paper and in books are more recent. One notices an inversion in the act of memorizing printed information through word of mouth. Texts such as the Vedas of ancient India were passed down through generations by being recited by the Brahmin. Though less than an hour long, “Fahrenheit Alliance” provides a lot of food for thought and contains many inspiring words. 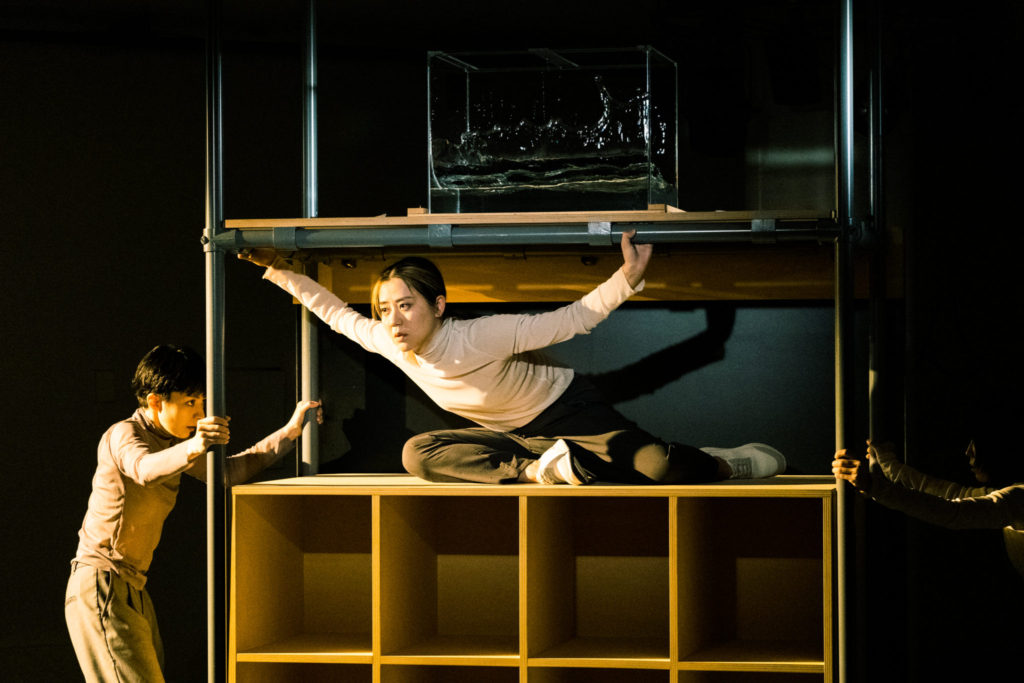 Dance Base Yokohama, a place that’s been gathering attention in the world of contemporary dance, served as the venue for Saori Hala’s “P Wave.” This one could be called a watertight work. Taken on their own, its physicality and specific movements may not seem novel. However, the movements of the three dancers, in which they assemble, support each other, sway, and appear to probe each other, capture the viewer’s gaze, making you wonder what they are doing. A scaffold is brought onto the stage and the dancers enter it. They sway and shake, causing the water tank placed at the top to flow over. One can’t help but to associate the shaking with an earthquake and the water with a tsunami. The very private swaying of an individual’s body eventually connects to a far larger context. “P Wave” differs in form from the kind of contemporary dance that was once popular and relied on peculiar physicality and movement to produce a certain outlandish charm. Instead, its strengths lie in the solidity of its concept and in the skillful way in which the passage of time is incorporated from start to finish. 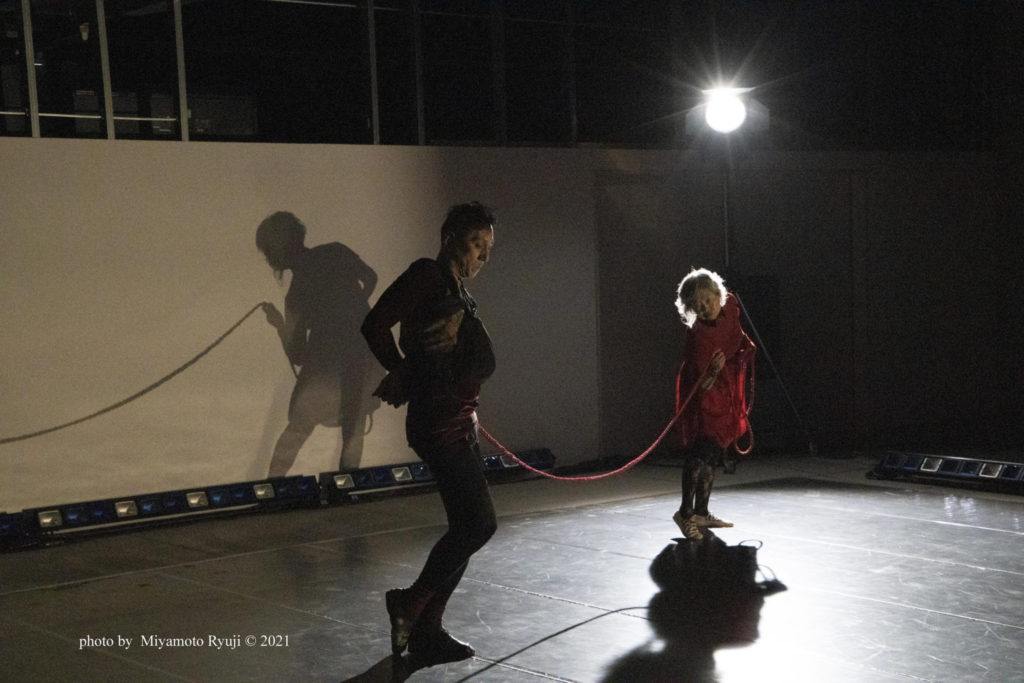 ARICA, who have quietly built a long career and recently celebrated their 20th anniversary, performed “Mimesis” at BankART Station, a space connected to Shin-Takashima Station. This performance features Takao Kawaguchi and Tomoko Ando, continuing the company’s practice of inviting guest dancers, who in the past have included Mika Kurosawa and Kota Yamazaki.

Takao Kawaguchi’s awkward, pigeon-footed stance makes it seem as if his body is restrained, either through his own will or by some outside force. Walking slowly, Tomoko Ando uses ropes to play a variety of games with the fettered Kawaguchi, as if toying with him. This, however, is not simply a one-sided, oppressive relationship – not like the one between a master and a slave or a sadist and a masochist. The interaction with the rope as an object involves taming and entangling, and at times the rope itself appears to have a mind of its own. ARICA have long explored the relationships that exist between objects and bodies and between objects and action, as is also evident from their early works such as “Parachute Woman” and “KIOSK.” Though their works and modes of operation have taken various forms, this singular focus has remained the same.

I’ve discussed a few arbitrarily chosen works above, but all the entries in YPAM Fringe share a certain tendency, beyond simply being examples of performing art. One could even say that the program naturally appears to attract certain kind of works, which have come to constitute its profile. Rather than so-called theatrical works, or over-theatrical ones for that matter, the contributions to Fringe are best described as works of contemporary dance, performance, and post-drama theater.

While Fringe encompasses a large number of small-scale works, its platform function makes that volume readily visible. That volume, in time, turns into depth. The fact that these works can be found in the crevices of the urban environment, rather than being buried in them, shows that the program is successfully fulfilling its function as a platform.

Fringe, of course, is not the only part of the event that hasn’t changed. The many Exchange programs speak to the current state of the performing arts scene. There are certainly both pros and cons to organizing most of the panels in the form of online discussions, but wasting words on that topic would surely only bore readers at this point. Online communities are flourishing in the age of the pandemic—that’s simply a fact.

It is currently difficult to enter Japan from abroad. At an event that once teemed with overseas presenters and artists, there are now relatively few seats for the audience and not many people can be seen hanging out around the venues. The Exchange program, however, has since before the pandemic been an opportunity for making new connections. Artists and producers would meet at the various panels, and then head out onto the streets and into cafes for chats, or perhaps hit up a bar and network until late at night.

I used to smile for myself while watching artists find new opportunities abroad through TPAM and others eagerly network during the event, all while dreaming of flows above and beyond the capitalist system and the state. If touring overseas brought some success with it, perhaps the break caused by the pandemic has laid bare ruptures in that community and provided a not entirely unwelcome breath of fresh air.

The performances in YPAM Direction are obviously complete works of art. Still, they too provided opportunities for connections. There were fewer performances in this category than before, so watching the entire lineup was not too much of a challenge. 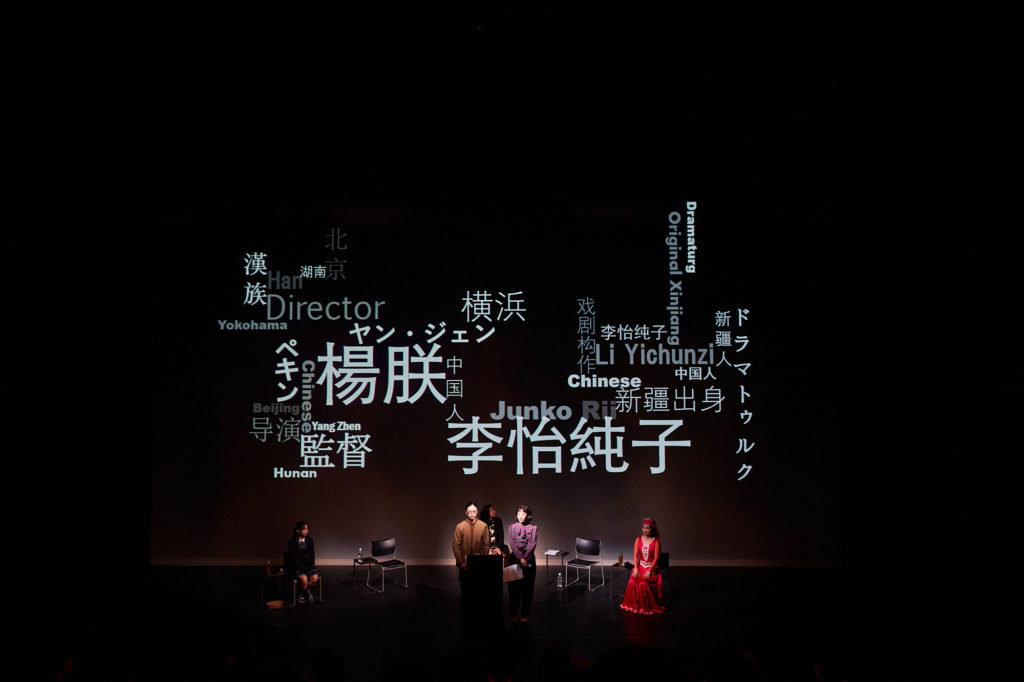 “Jasmine Town,” presented as a work in progress, may have demonstrated what hasn’t changed with TPAM becoming YPAM, all while pointing to one of the directions YPAM may go in the future.

Practically every sufficiently large city in the world has its own Chinatown. The one in Yokohama is a tourist destination, located close to the Kanagawa Arts Theatre, the venue of YPAM Direction. The shops and restaurants lining the streets of Chinatown are familiar to everyone in the touristic sense, but the inner workings of the local community are far less known. Who are the residents, where did they come from, and why? It’s easy enough to imagine a Chinese community overseas, but are they second-generation or third-generation immigrants? Or are some of them still on the move? Part of that topic is the focus of “Jasmine Town.”

The theme ties in with “International Exchange Seen from the Perspective of the Stateless,” the keynote lecture of the Exchange program. The speaker, Chen Tien-shi, also appears in the play, relating part of her story. In the lecture, she spoke about the history of Chinatown, her family history and experiences as a stateless person, and the state of the world from the perspective of nationality. Touching not only on ethnicity and sexuality, but the world of nationality-related minorities as well, her talk was as interesting as any play. How the final version of “Jasmine Town,” set to be finished next year, can improve on that may be something the creators will have to grapple with. 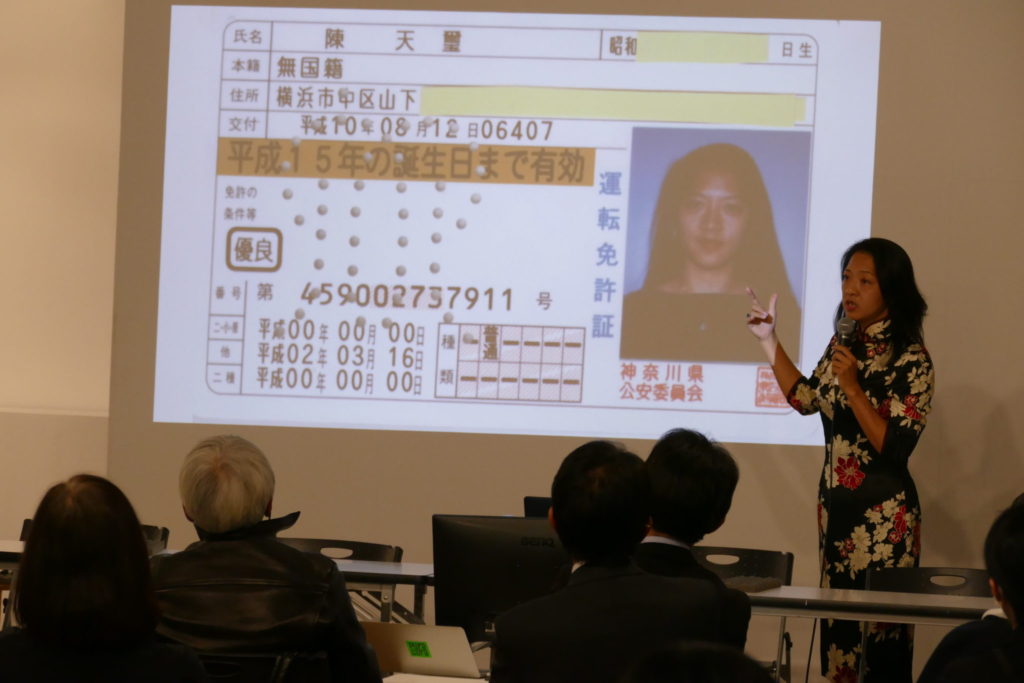 Keynote lecture: “International Exchange Seen from the Perspective of the Stateless” Photo by Hideto Maezawa

The Direction program also included a trilogy of plays by TAIHEN: “The Jade Castle—Wandering Love: Jo (Beginning),” “Sandbox Bento—Wandering Love: Ha (Break),” and “Heart and Earth — Wandering Love: Kyu (Rapid).” The second part of this series was once performed at TPAM, and with YPAM now featuring the entire trilogy, it’s clear that the two events are one and the same.

TAIHEN simply do not fit into today’s mold of seemingly sensible inclusiveness. Rather than accepting the paradigm of packaging disability in the form of art in order to subsume it into the public sphere, these performers take on the public sphere head on. This can be understood in the context of the experimental era, led by genres such as underground theater and Butoh. The artwork is a movement, and the movement is an artwork. Their bodies possess the sort of concentration and strength that doesn’t allow the audience to look away. 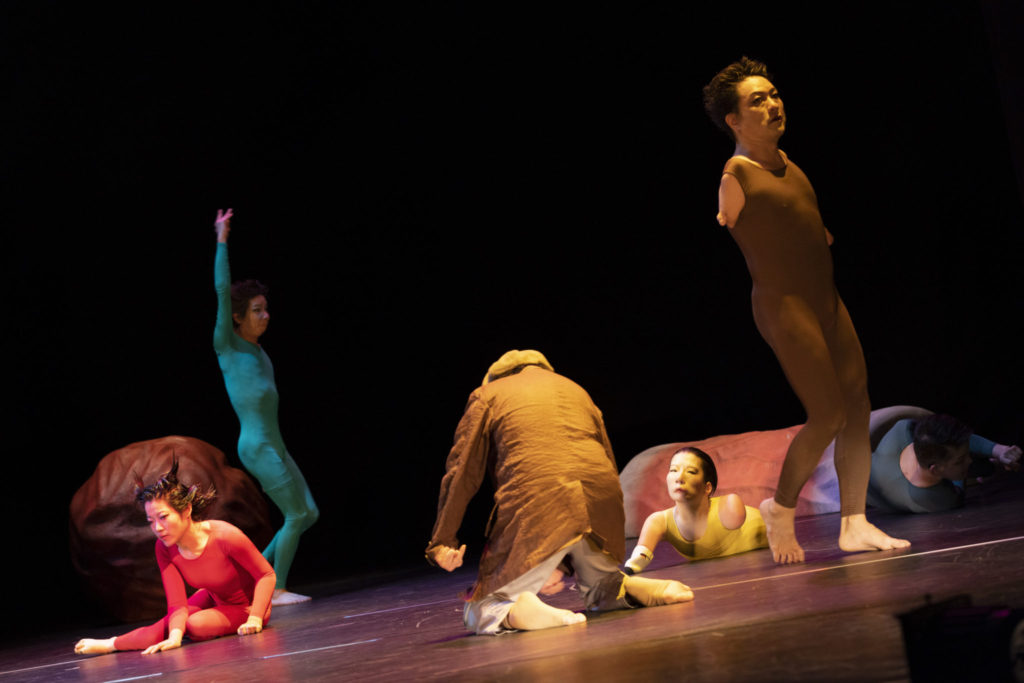 National minorities, ethnic minorities, and the disabled as minorities are some of the people who fall between the cracks in the union of capital, citizens, and the state. To be sure, artworks circulate within the framework of globalism. Nonetheless, the issues of state and borders loom large, despite the pandemic—or, more accurately, because of it. One begins to understand that nothing has changed.

Still, at this threshold of an age, the act of highlighting the people who move between those concepts, or the focus on people who possess that perspective, is something that hasn’t changed from TPAM to YPAM. Rather than seeking to provide a transparent, dry-as-dust platform, the organizers have proudly sought to imbue it with something. That something is the backbone crystalized over several years.

Though the pandemic may be complicating things right now, the networks laid out across East and Southeast Asia with this event as the inspiration and the hub will surely connect and bring people together somewhere once again. YPAM retaining its functions is likely to bring about the unexpected. And, as if by chance, some things will continue as a result of those connections.

Theater critic. Born in Gifu Prefecture in 1978, Takahashi is an associate professor in the Drama Course at Toho Gakuen College of Drama and Music and holds part-time lecturer positions at several institutions, including Japan Women’s University and Tama Art University. He serves as a lecturer in the Critique of Performing Arts series given at Setagaya Public Theatre and in the Za Koenji Creative Theatre Academy. He has regular columns in the Teatro and Tosho Shinbun (The Book Review Press) magazines, and has held fellowships with the Asian Cultural Council (in 2013) and the Shiba Ryotaro Memorial Foundation (6th).