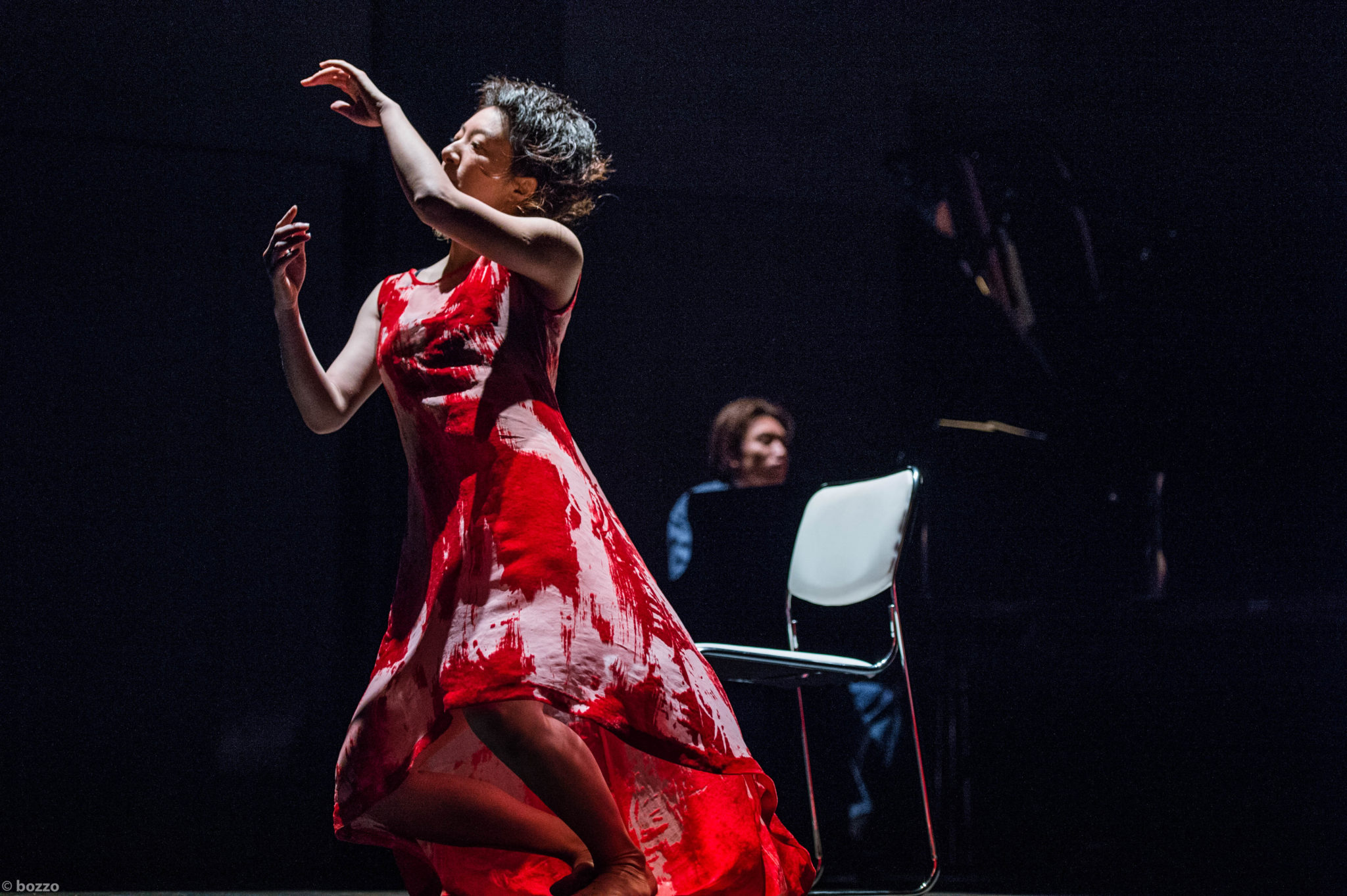 Maki Morishita continues to radiate a rather unique sense of presence in the Japanese dance scene. This time she shows an ambitious solo dance piece based on the four movements of Beethoven’s “Destiny Symphony,” each choreographed by a different person. Their styles are totally different, and one of them is actually a photographer. While the piece was first performed to an existing recording of the music last year at Morishita Studio, this time Maki Morishita dances to a live piano performance by Yasuhiko Imanishi. (I didn’t catch the premiere because I wasn’t in Japan at the time, so this was the first time I saw the piece, albeit only as a preview performance on which this review is based.)

In charge of the choreography for movement one was MIKIKO, who has been choreographing everything from pop concerts to Olympic ceremonies. Dressed in a black tank top and red short pants, Morishita puts on a long, red and white dress. The tone of Imanishi’s piano is dramatic and heavy as he seems to be hurrying the dancer with his high-pitched attacks. Under a spotlight divided into square areas, Morishita mimes an action of pushing the surrounding “walls,” but whenever she manages to slip out of one room, that only takes her to another one… The intention behind this is clear, but it comes across in a very explanatory kind of way. While there is some change in the repetitive action, I catch myself waiting for a moment that instantly changes the mood altogether. However I must say that the charming effect of making effective use of her fingertips goes very well with Morishita’s character.

Once she finishes dancing, Morishita moves over to a chair and table behind a large vinyl curtain. For movement two (choreographed by Mirai Moriyama), the piano performance slows down to a gentler pace. Morishita reads out a list of strong points about her own face and body, and steps up from behind the vinyl curtain to demonstrate those strengths. The exaggerated poses she strikes while doing so qualify as a form of dance that illustrates again Morishita’s distinctive character. 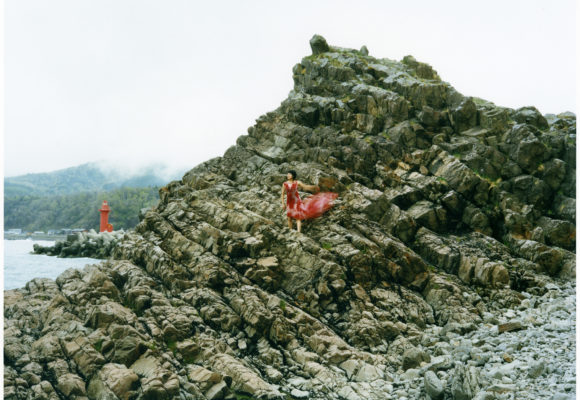 In charge of the choreography for movement three was photographer Naoki Ishikawa. He initially declined the offer, but when Morishita subsequently called him up, unaware that he had refused, Ishikawa reportedly took her on a tour up to Mt. Fuji. Footage of that climb paves the stage for the movement that Ishikawa eventually choreographed, giving Morishita room to dance with ease for some time, only to let her crawl up the mountain at the end. In the realm of contemporary dance, “making something move” is an act that is in itself choreography. In other words, asking someone to “climb a mountain,” and the person eventually does so with all kinds of body movements, it is an action that has as such been “choreographed.” In this sense, the piece at large can also be enjoyed as a “challenge to choreography.”

Movement four was choreographed by Butoh great Akira Kasai. Wearing a white, loosely fitted dress that shows only her feat, Morishita lowers her gaze, hunches her back, and occasionally walks across the stage while stomping her feet violently on the floor, in a manner as if fighting her destiny. What particularly attracts my attention are the palms of her hands. Throughout the performance, both hands are open, as an expression of what I would interpret as accepting, trying to grasp or imposing destiny, and cherishing herself. 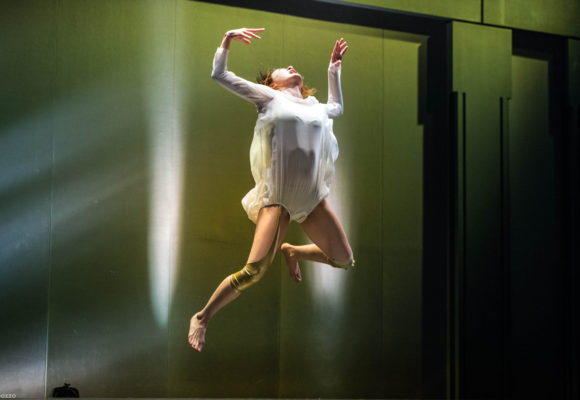 Toward the end, Morishita continues to dance alone even though the music has stopped. That’s probably to communicate the idea that, after all, it’s up to ourselves what we eventually do with our destinies. The performance ends with Morishita standing with both feet firmly planted on the ground, in a spotlight that hits her like the morning sun as it outlines the shapes of her limbs. It was a piece full of challenges, whereas the four choreographers’ very different styles ultimately highlighted the multi-faceted qualities of the artist Maki Morishita.

Let me also mention that, as if in response to this piece, Morishita proved her mettle in her own lengthy choreography based on the second movement of Beethoven’s “9th” at her company Morishita Stand’s performance last February.

Maki Morishita “Dancing all movements of Beethoven's ‘Destiny’ Symphony No. 5”