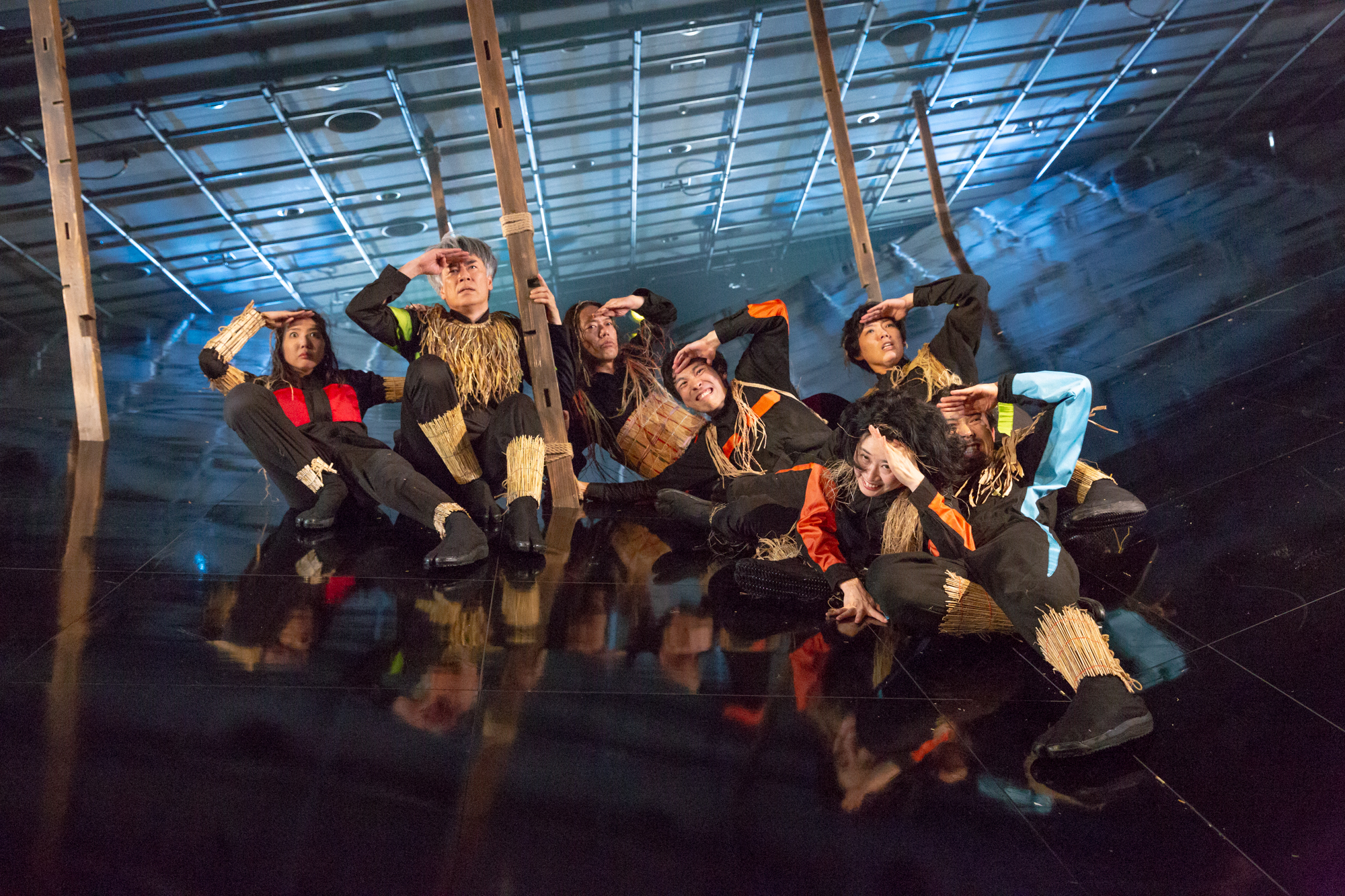 The stage, with a surface like black granite, measures about 10 x 10 meters. It is significantly slanted from the back down to the front, and has an additional lengthways fold in the center. It all looks like a laptop computer that was opened as wide as possible, turned around by 90 degrees, and propped against something. The actors wear Japanese-style work shoes and leggings made of straw-like material, and watching them as they seem to slip and fall with every move they make on the sharply sloped stage is quite a nerve-stretching affair. They only manage to get stable footing when they cling to one of the seven square timber bars that reach from the stage up to the ceiling, lie down, or fling themselves face down on the slanted floor. It’s just as shaky and uncertain a scenery as the “Site of Reversible Destiny” by Shusaku Arakawa and Madeline Gins. 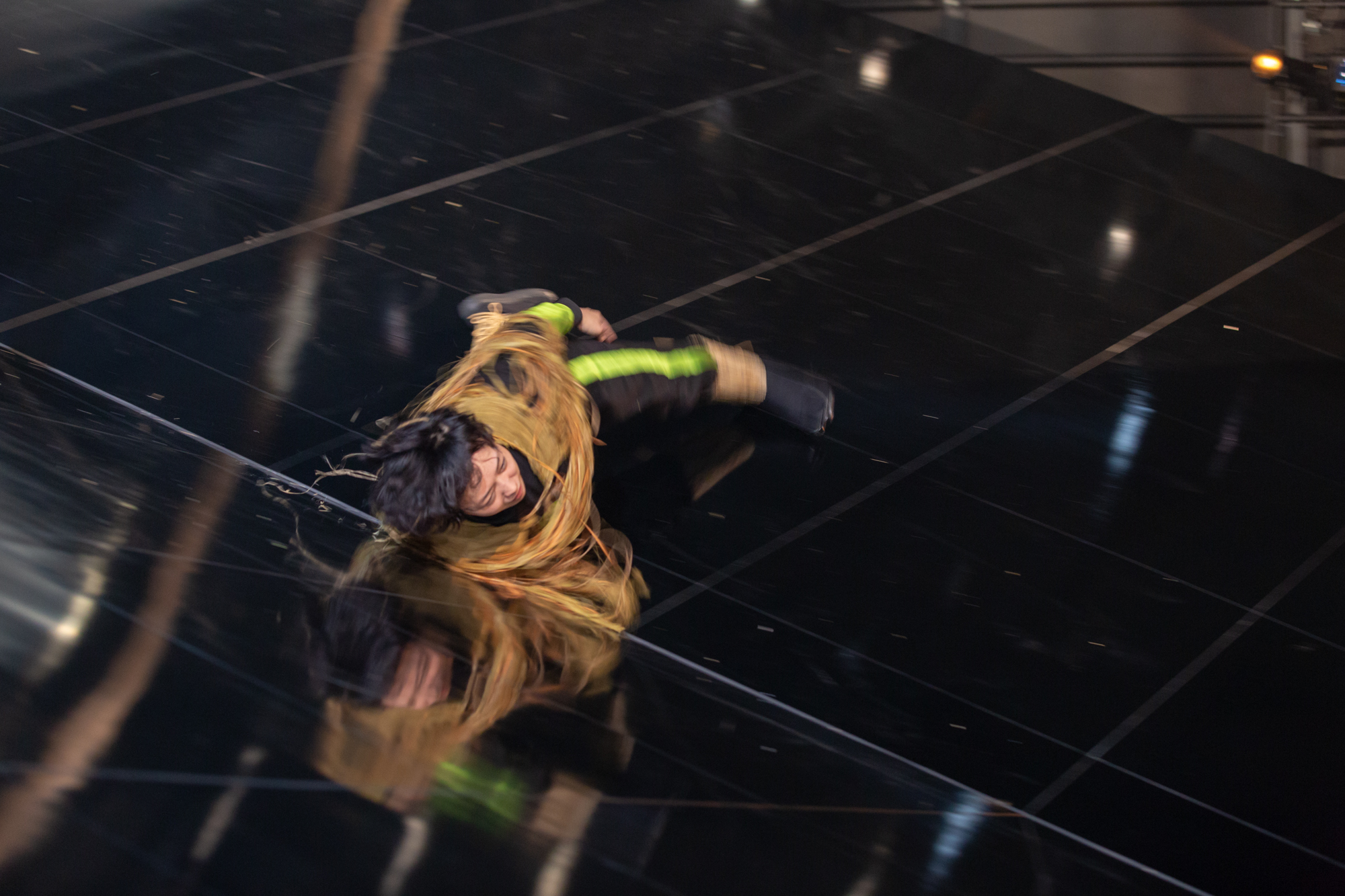 The seven characters that appear in the play are the ”Wife,” the “Husband,” the “Daughter” and the “Prodigal Son” ¬– the family whose peaceful life has been disrupted – as well as the ”Worker” in charge of decontamination with his robot “Bush,” and the “Employee” who gives instructions. The expression “ano hi (that day)” frequently appears in their dialogues, making the viewer involuntarily think of the disaster that happened in Japan seven years ago. The unstable blackish stage floor is reminiscent of the heavily shaking earth, the ocean that swallowed up countless lives, and the subsequent contamination with radioactive substances. The theme of this piece is, quite clearly, “Japan after that day.” 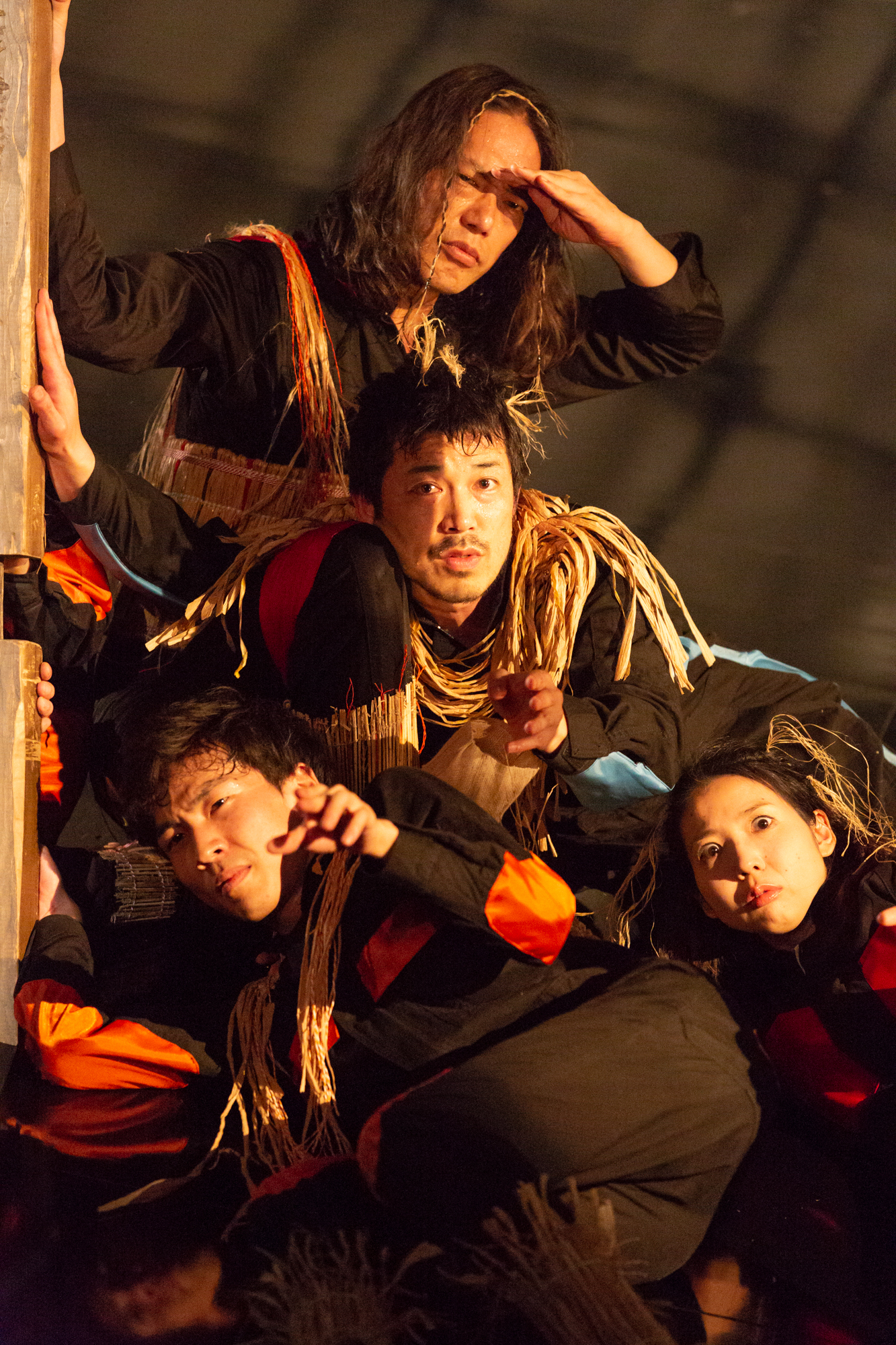 Discrimination, group behavior, smartphones, the seniority system, vested interests, total obedience and nationalism, social withdrawal, deflation, nursing care, work-until-late/play-tetris-on-the-train/shop-at-the-convenience-store/get-home-late-at-night/sleep-over-the-weekend… These are taken from Shuntaro Matsubara’s original script. While casually slipping in (the Japanese translation of) Marcel Duchamp’s wise saying, “It’s always the others who die,” the actors additionally read out names of ”official sponsors of the Olympic Games in Tokyo 2020,” which are not in the original. There are also expressions that sound to me like “Tokatonton” and “Kasa ga nai” (Osamu Dazai’s novel and a popular song by Yosui Inoue, both of which in a way embody the postwar Japanese society), but I might have misheard those. 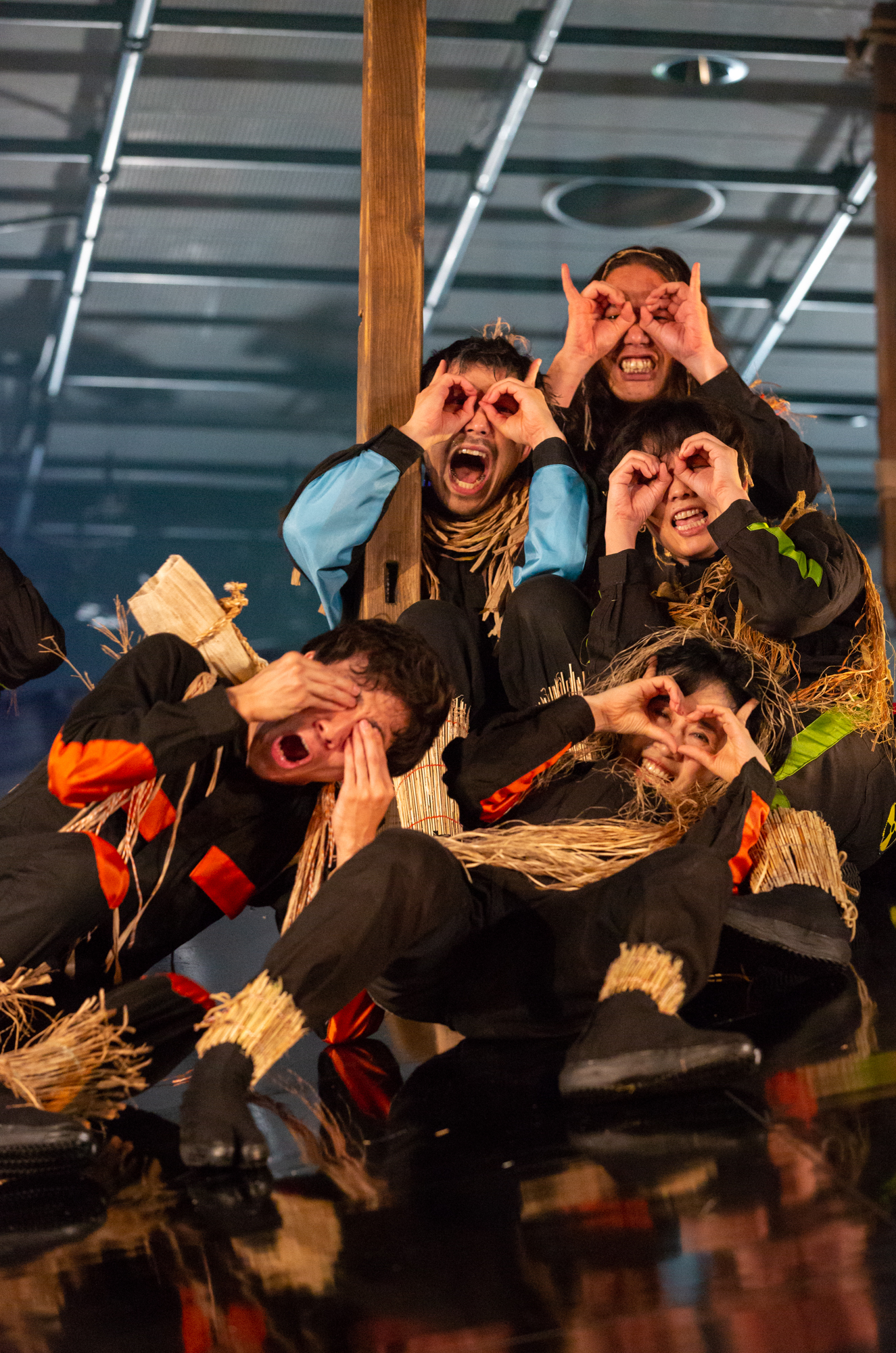 Dialogues are frequently interrupted by buzzer sounds and other harsh noises, as well as lights that rotate like searchlights or emergency lamps. The illumination – in the same yellow and magenta tones as Andy Warhol’s “Cow” – is at times so gaudy that it seems to be indicating local bubbles in our polarized society. Sounds, lighting, the slanted stage, the actors’ acrobatic movements, peculiarly intonated speech – it’s all plucking the viewer’s nerves from beginning to end.

What sticks in the viewer’s memory is not something like a linear narrative. If you allow me to apply again a metaphor that I previously used in my review of another one of their pieces, a Chiten play is usually more like stew rather than a multi-course meal. You forget what exactly you have eaten and in what order, and all that remains after the performance is a vague feeling of satiety and the fragmentary recollection of “having eaten stew.” This is one dish that was masterfully and realistically prepared out of the bitter ingredients of “Japan after that day.”

Chiten “Yamayama (I Would Prefer Not To)”