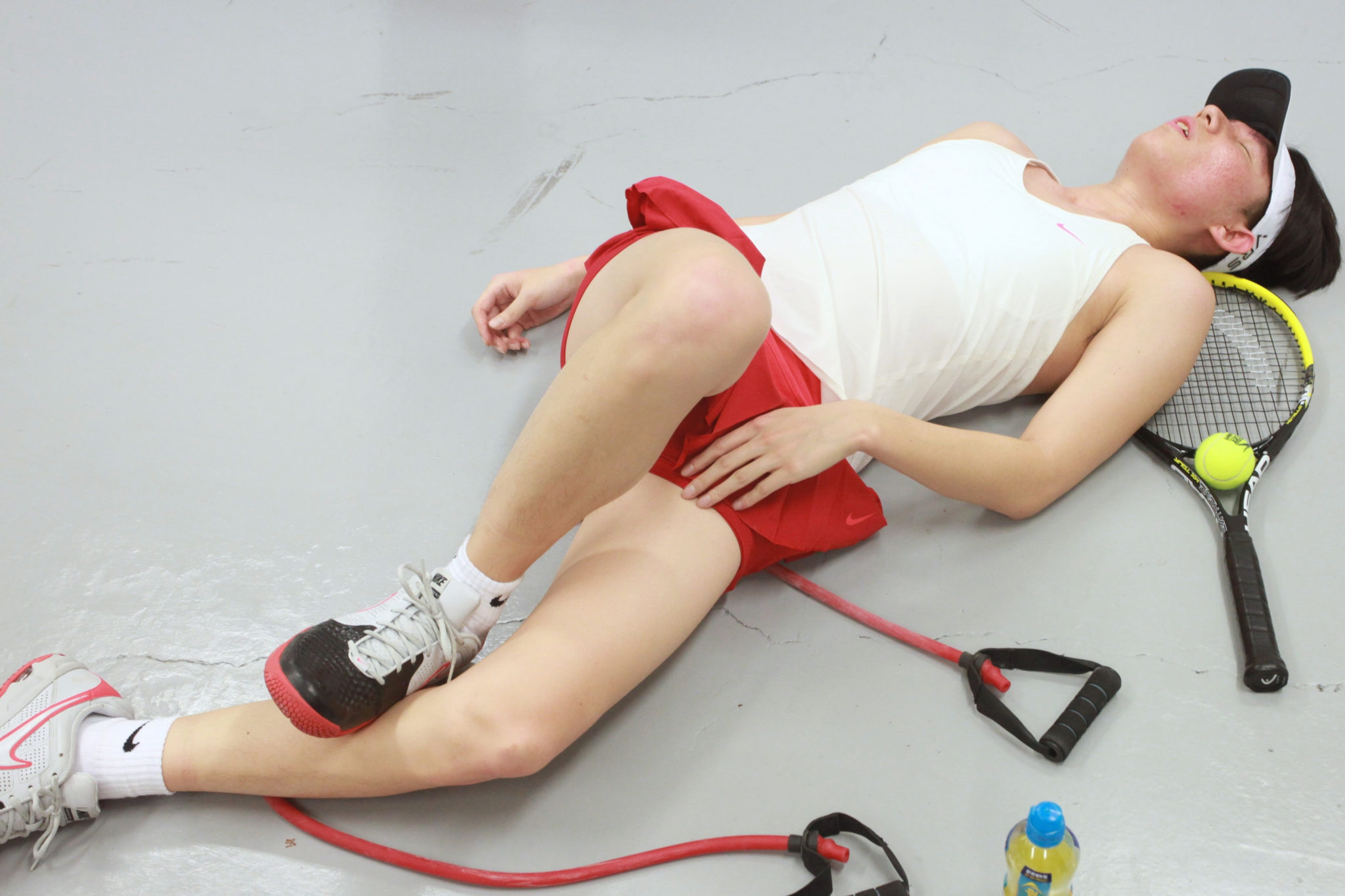 A few weeks ago I saw an exhibition of photographs of a rugby match at a certain company’s showroom. Captured in those photos, shot with a high-performance camera, were clashing male bodies, sweat splashing through the air, expressions of agony and moments of delight. In addition to an exaggerated masculine image, the pictures made me feel how clichéd the justification of “pureness and beauty” is, and it occurred to me that these may be considered as “war pictures” of the present age. 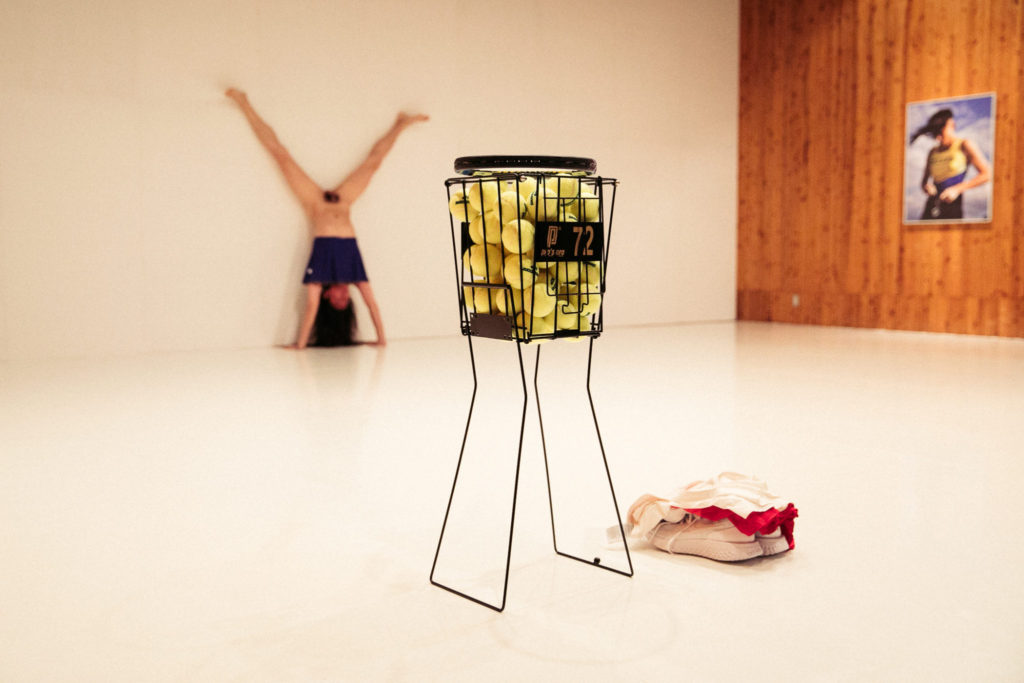 In his “Life of Athletics” series of performances and photographs (2014-), Yuki Kobayashi has been discussing issues of sports and gender while focusing on such particular qualities of sports. The seemingly odd combination of sports, gender and art is for Kobayashi quite relevant, considering that he once aspired to be a professional tennis player. He eventually chose a career as an artist, and studied performance art in London, and it was through his creative work in a foreign country that he was repeatedly confronted with issues related to his own body, gender and ethnic roots. This experience ultimately triggered the start of this series themed on a certain sense of discomfort that Kobayashi used to feel in the realm of sports. The relationship between female athletes’ feminine sportswear and the audience’s gaze; the bashing of Maria Sharapova for screaming every time she hits a ball… It is such issues of sexism in sports that inspire Kobayashi’s work. 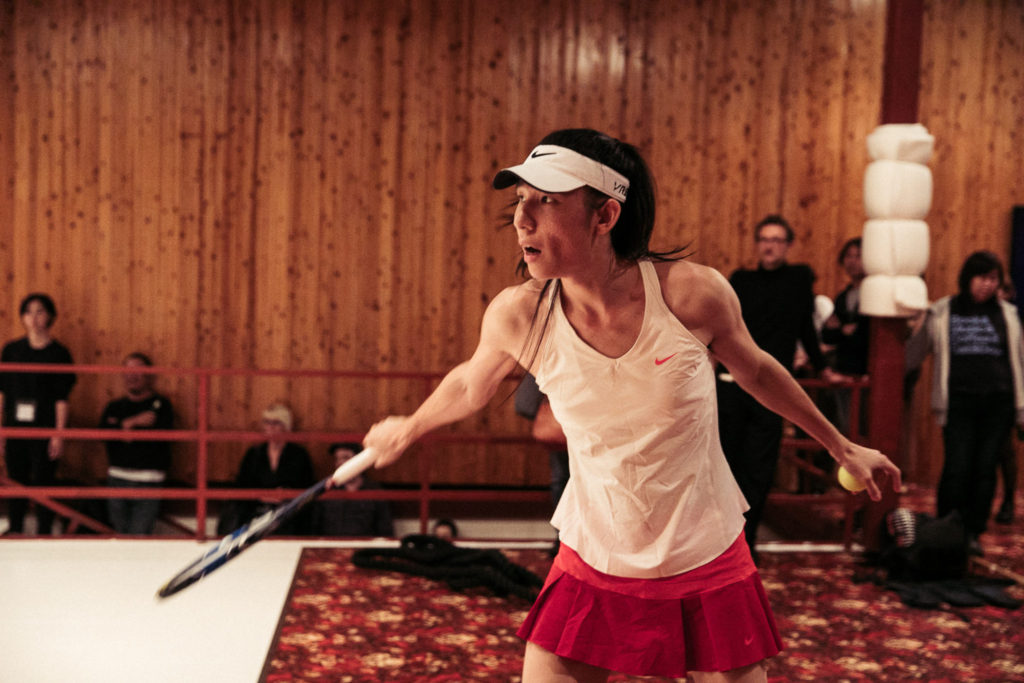 The current series was showcased in an exhibition at VACANT in Harajuku, along with the performance “Chromosome” at the same venue. Provocative in a humorous and ironical way, it was a truly “active” and unique kind of event. Kobayashi appeared on the stage dressed in a black shirt and pants, with long hair down to his back. He eventually took off his clothes to reveal a cheerleader’s costume he had been wearing underneath. Then he walked over to the wall and did a handstand, exposing his naked lower body when his skirt fell down. Increasingly bewildered, the audience watched on as his genitals were further exhibited when he jumped up and down on a trampoline. Kobayashi then took off all his clothes, before changing into female tennis wear. Once he had tied his hair together, he began to smash tennis balls against the wall with screams and grunts. Next he put on kendo gear. Still with his lower body naked, and again accompanied by weird noises, he started hurling his bamboo sword against a pillar… 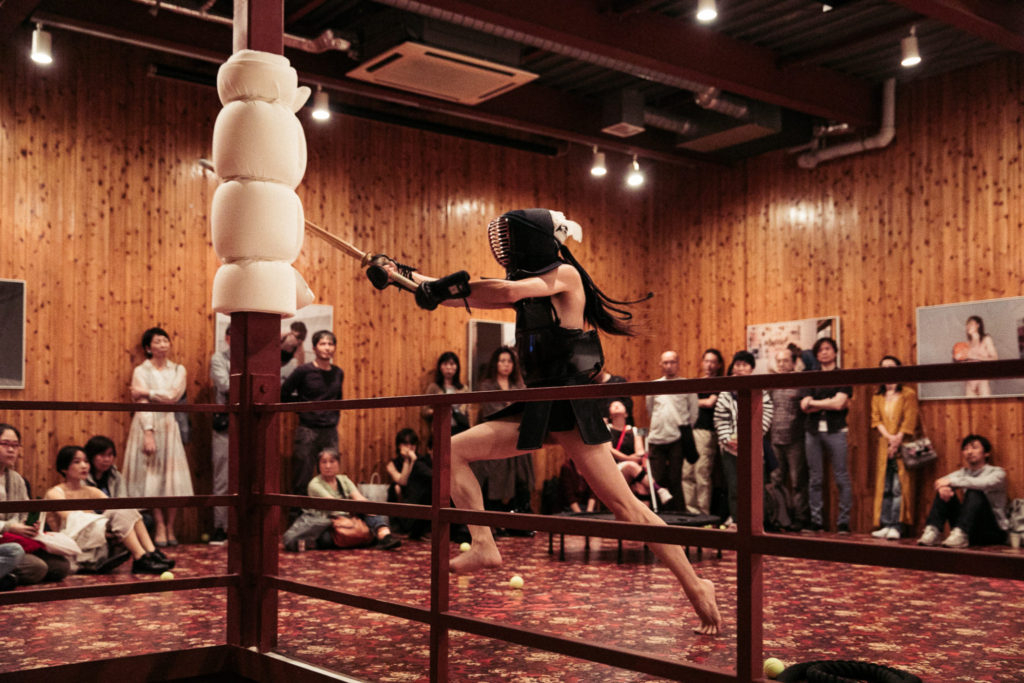 Long hair and mini skirt as icons of femininity; technically skilled operations in different sports; the repeated display of a naked male body; and the repeated act of changing clothes. Engulfed in the gradually increasing heat and humidity in the space that wasn’t exactly suited for sports, the audience was completely and somewhat nervously drawn into the unpredictable spectacle of flying balls and swords. It was a breathtaking, but not at all unpleasant experience. To witness the disturbance of genders and the decomposition of traditions in sports, while gradually getting used to nakedness thanks to the repeated ritual of dressing and undressing, was an experience that was altogether truly refreshing and exciting.

Just how much are we tied up in rules and regulations in our lives? Is this an essential part of human existence? ” I wanted to create situations where it’s not unnatural to be naked,”   Kobayashi explains, and by creating somewhat androgynous circumstances mixing male and female elements, he attempts to overcome the limits of sexuality and various other norms and rules.

Aiming to transcend classification by chromosomes and explore new physical and mental states, Kobayashi’s performance was an event that made me feel a chance for freedom.