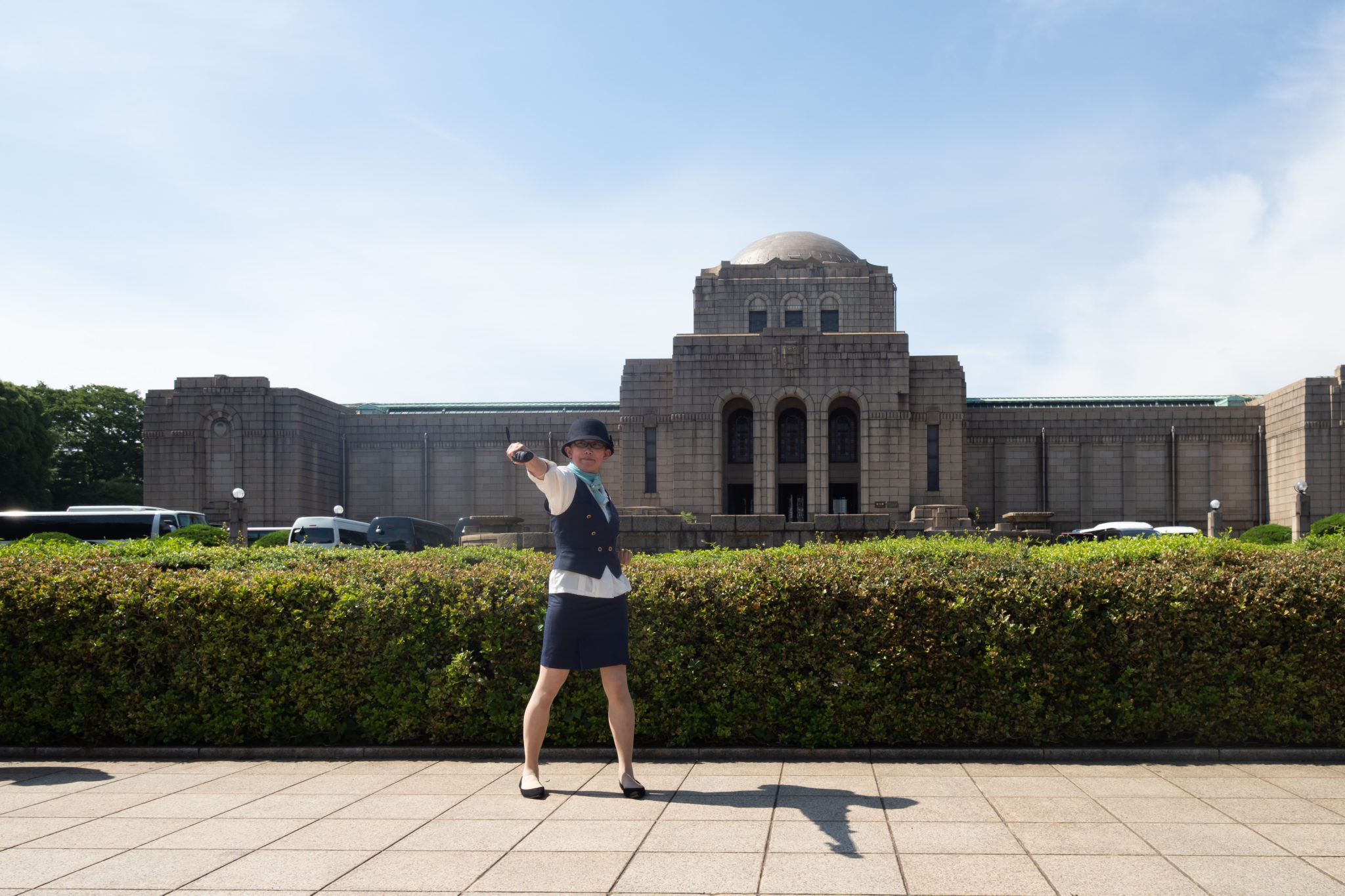 Come to think of it, why do they teach dance in PE class? This is the question that initially inspired Saiko Kino to launch her series of lecture performances. Is a dance performance a physical exercise rather than a piece of art? Are dancers and choreographers athletes rather than artists? There are quite a few other related questions that immediately come up.

While generally following the tracks of Baku Ishii, a pioneer in the realm of modern dance in Japan, the first lecture performance retraced the modern history of dance education and physical exercise (February 11, BankART studio). 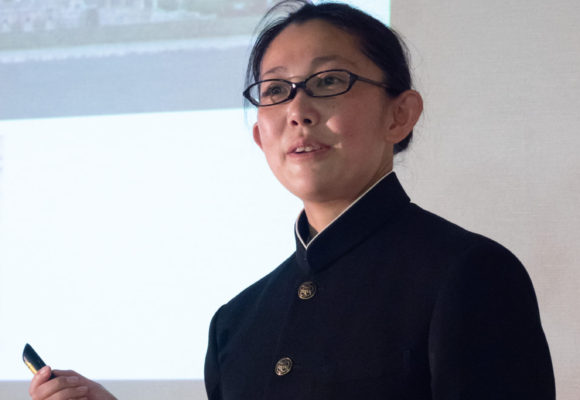 Kino is a choreographer/dancer with a background as a dance instructor in physical education. The genuinely personal doubts that arose through her work, and eventually inspired these activities, are exactly what made the first performance absolutely convincing.

With increased acuteness, this second installment focused on how physical exercise has been utilized for military affairs, and highlighted the difference between physical exercise and dance. The performance also accentuated the fact that Olympic Games, supposedly celebrations of sports, are a matter of state policy. Dressed up as a sighseeing bus guide, Kino guidedvisitors into the Picture Gallery while roughly explaining the history of the Gaien, and at once pointing out the construction work on the New National Stadium. A commemorative location where the funeral of the emperor Meiji took place, the Meiji Jingu Gaien has always been a stage on which the role of physical exercise in modern day Japan has been showcased.

Under Kino’s leadership, everyone in the audience took part in the so-called “Founding Calisthenics,” reportedly a type of gymnastics that were originally introduced to celebrate the 2600th anniversary of the foundation of the Japanese empire. The exercise involves repeated simple movements in different directions that anyone can do quite easily, not unlike the popular daily radio gymnastics. It is said that about 1,000 citizens gathered at the Gaien to participate in the initial gymnastics for the celebration in 1940. Also performed were exercises with a name that would normally be pronounced “Nihon taiso” (“Japanese gymnastics”), but that in this case is pronounced “Yamato-bataraki,” apparently inspired by such ancient chronicles as theKojiki(”Records of Ancient Matters”) and the Nihonshoki (“Chronicles of Japan”).Again, simple movements are repeated for the purpose of  mental uplift. Additionally, there was also a performance of an even more macho, military march kind of exercise named “Kurogane no chikara.” 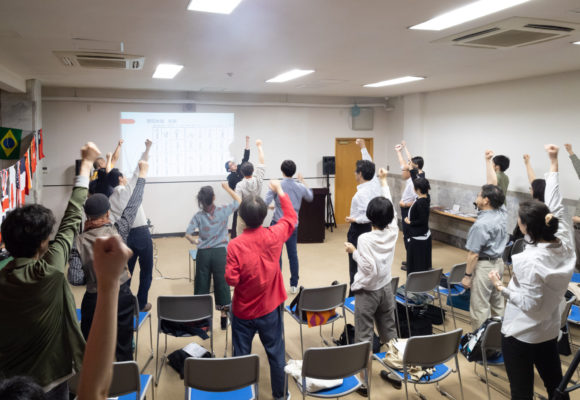 From these exercises one can understand how, back in a time when the Japanese emperor had authority in both political and military affairs, physical exercize was used as a management tool for the cultivation of the people’s bodies and minds. At the same time, it seems that the ordinary people were actually enjoying their gymnastics. Sets of simple, straightforward movements – up, down, forward, back, left and right – can be performed by anyone at their own appropriate speed, depending on their physical condition. It can be done as a slow exercise, as a fast and rather exhausting training, or as a means of conditioning the body and its often ill-balanced daily movements.While such gymnastics were originally accompanied by shouts only, they can also be done to music. They used to be done in groups, but can also be performed alone, at any time and place, and this casually joyful notion must have played a part in the popularization of gymnastics. Gymnastics seem to bean effective means for boosting people’s morale through energetic movements, increase team spiritwithin a group, or control and supervise the people both physically and mentally. Kino performed gymnastics like a sort of entertainment accompanied by popular songs of the time, or in a street dance style to pronouncedly rhythmical music. It is easy to see how a fitness activityin times of peace could be instantly converted into a drill for military purposes.As a matter of course, this is something that still applies today. 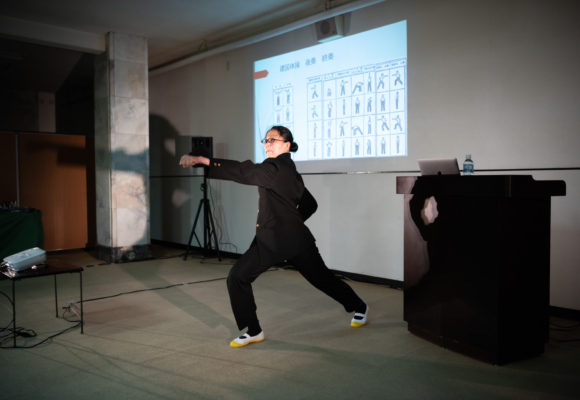 1912: The emperor Meiji’s funeral is held at the Jingu Gaien.

1940: The Tokyo Olympics are supposed to open here, but instead, “Founding Calisthenics” are performed on May 12.

1943: Students are seen off to the battlefield from here.

Now that we’re approaching the opening of the next Olympic Games, it remains to be seen how Jingu Gaien will reinvigorate its national centripetal force.

While dance is forbidden during wartime, physical exercise isincreasingly given importance. As opposed to manageable gymnastics, the spiritual independence and individual directivity of dance is obviously disliked. In the present age, we are experiencing the formation of a totally new type of controlled society, in yet a different shape than in wartime. Dance was included in the category of physical education for reasons related to history, but there certainly also was the advantage that this made it more manageable and controllable. Dance must not become the “canary in a coal mine” of its time. 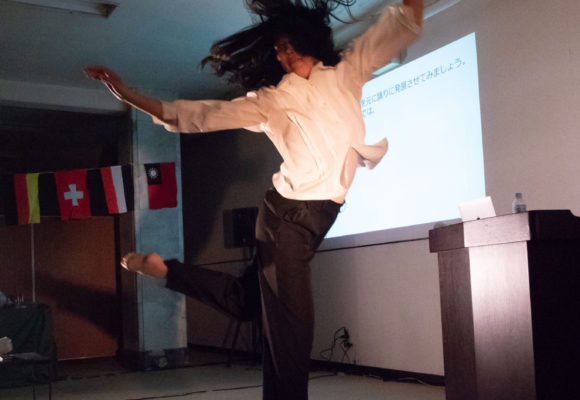 Kino emphasizes freedom as a quality that defines dance in contrast to physical exercise. At the end of her performance, she improvised a loosely flowing kind of dance – in the name of dance as a manifestation of free intention and thought that is not managed or controlled.

This series will be featured at Dance New Air 2018.
October 6 - 7, 2018
GOETHE-INSTITUT TOKYO
http://dancenewair.tokyo

Dance journalist / critic. Has been contributing articles to newspapers and magazines such as DANCEARTand Theatre Arts. Member of AICT, and co-director of the Maiboku no Kai. Co-authored publications include ”Future of Performing Arts from Quebec” (Sangen-sha), ”54 Chapters to Know About Quebec” ( Akashi-Shoten), and ”Modern Dance in the Theatre of War, Takaya Eguchi and Misako Miya’s Modern Dance Group Touring in the Battlefront (canta).