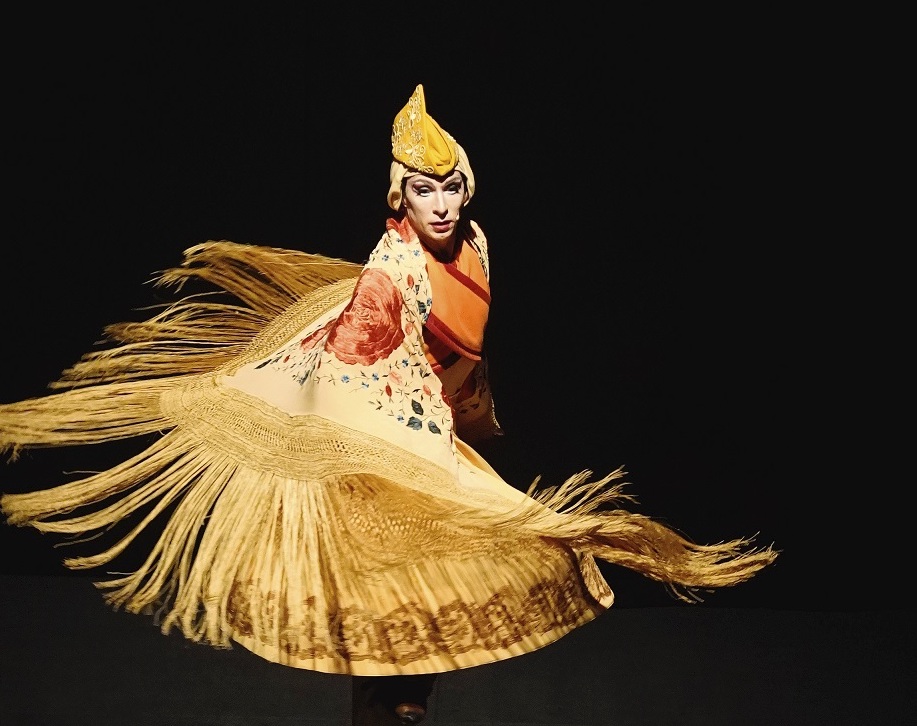 Toward the end of the corona year 2020, François Chaignaud visited Japan for a rare performance. “Romances inciertos – un autre Orlando” (Uncertain Romances – Another Orlando)[1], a spectacle mixing live music, song and dance, marked a further step forward in Chaignaud’s explorations beyond the boundaries of genders and dance styles.

The two pieces that had been previously shown in Japan were both codesigned with Cecilia Bengolea, and performed with voluminous musical accompaniment in the form of live DJ sets.

“altered natives’ Say Yes To Another Excess – TWERK” was shown at Spiral Hall as part of the Dance New Air festival in 2014. It was a speedy interplay in which five dancers including Chaignaud, wearing long hair and comical makeup, reconstructed movements rooted in club and street culture. In “DUB LOVE,” which was featured at KYOTO EXPERIMENT 2018 (ROHM Theatre Kyoto), three dancers wearing unitards and toe shoes performed a fusion of dance styles of different times and places, in rather unique series of movements. What began with an abstract choreography, for example, blossomed out into a pas de trois that reminded me of the Renaissance painting “The Three Graces,” while Chaignaud presented an “M” shaped pointe (tiptoe) position with his knees bent outward, marking the very intersection where ballet meets butoh, the heavens meet the earth. 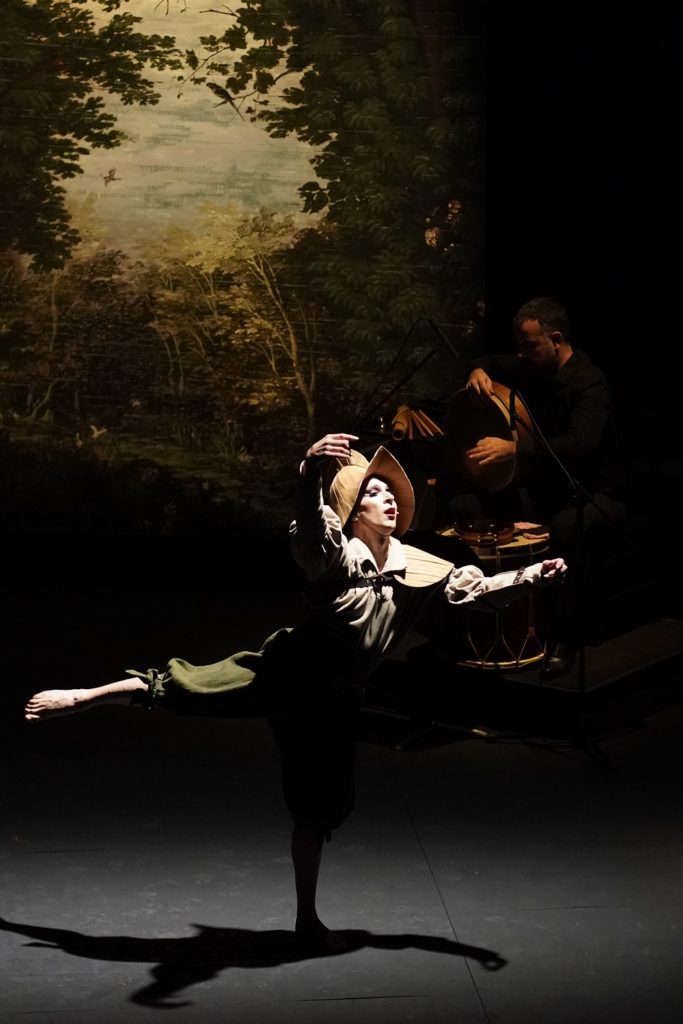 Following its premiere in Geneva in 2017, “Romances inciertos” has received praise across the European continent. The theme of androgynous characters, which are reflected in the transformations that Chaignaud undergoes in the course of the performance. The characters – a girl soldier dressed like a man, the archangel Saint Michael, and the gypsy La Tarara – appear on a stage consisting of three different areas (all of which are set in Spain) that match the respective characters. “Orlando” in the subtitle is the name of a poet in English writer Virginia Woolf’s novel, who lives for three centuries and a half while changing his sex and living environments. Further contributing to establishing a connection between traditional/religious elements and contemporary art, are visual and acoustic effects by Nino Laisné, a French artist familiar with Spanish culture. He gathered four outstanding players of the bandoneon and other old musical instruments, and put together a program with several traditional folk songs that have been passed on in all parts of Spain. The four panels that surround the stage display collages of tapestry designs from the 17th-18th century, showing different types of forests. The panel “tapestry” moves according to Chaignaud’s interpretations of the different characters, whereas animals appear under the forest. 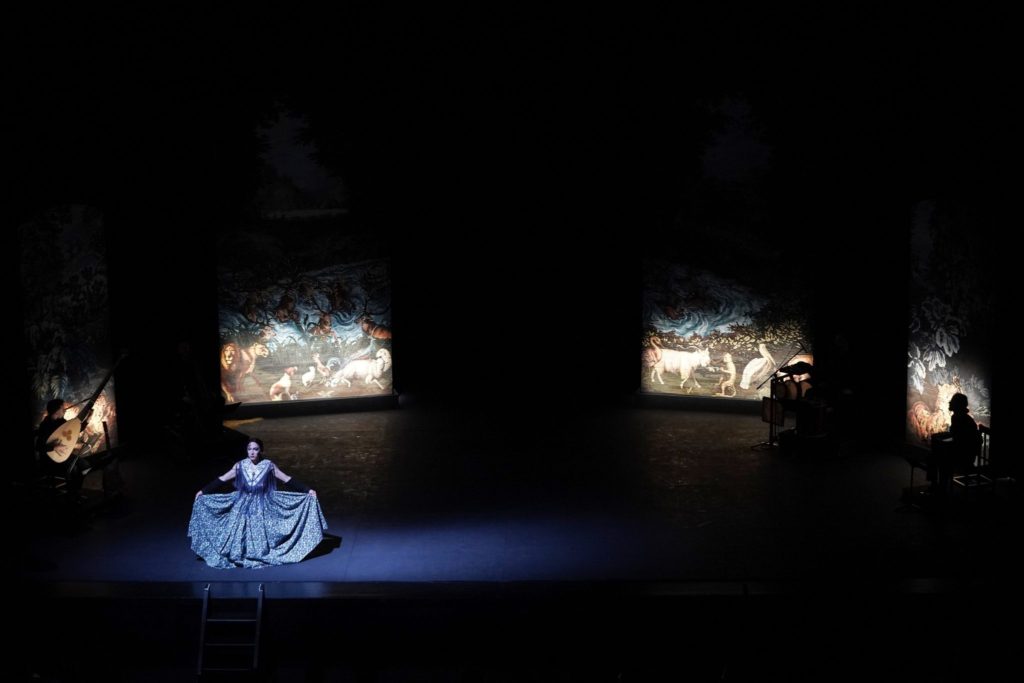 When the girl soldier appears in the first scene, seemingly frightened, there is a sense of tension running through both her light gestures and her leaps with bare feet, accompanied by a strangely mellow sounding voice that evokes images of moonlight falling onto the dimply lit stage. The lines of “Romance of the girl soldier” disperse into the river as she goes to war in the guise of a man, while the deer in the panel are clamoring in the water – supposedly representing the soldier as he/she is carried away as a result of the political situation, and eventually, the people in general. 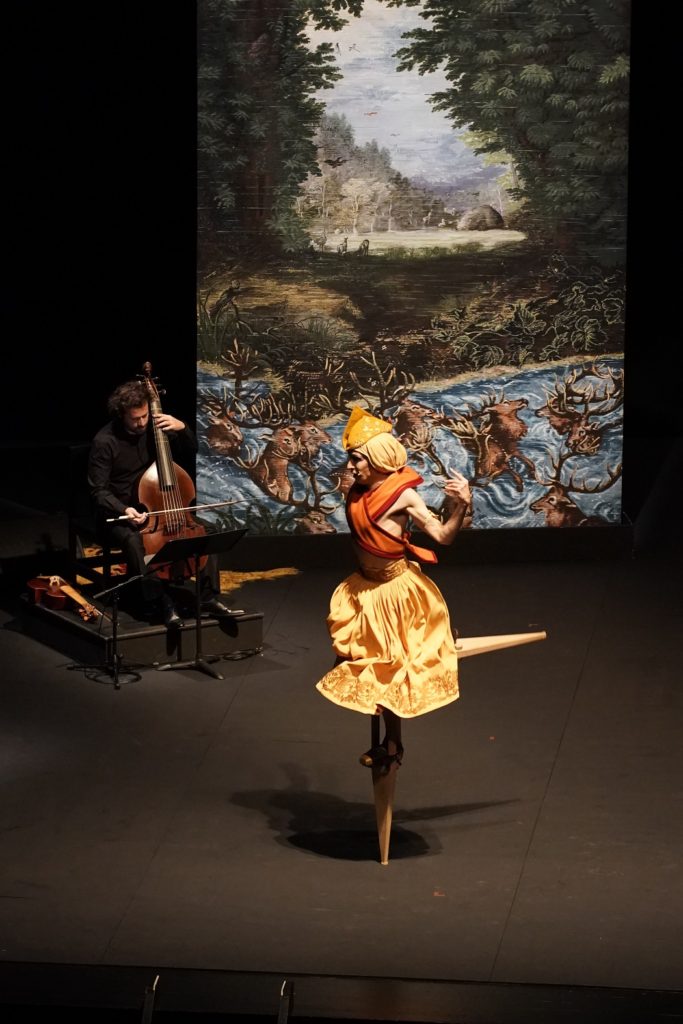 At the beginning of the second scene, Chaignaud enters the stage on stilts as an extension of his body, reminiscent of the descent of the supernatural archangel Michael. Dressed like the sun itself, wearing a yellow hat and skirt, he strides as if the stilts were his own legs. But then he climbs down, assisted by four musicians, bends the insteps of his feet wrapped in orange satin shoes, and eventually lands on his toes. As soon as he arrives on the floor, the divine kind of dignity he was irradiating from the top of his stilts (which are still being used in Catholic religious marches today) turns into something that is more akin to wild shrewdness.

The archangel Michael, who is said to have illuminated the young Jeanne D’Arc when she led the French army in the 15th century, is portrayed in numerous paintings and sculptures as a brave fighter against the devil. Reversely, in the lyrics of a folk song, the Spanish author Garcia Lorca likens the sensuous archangel who gathers believers around him to a lovesick handsome boy. Corresponding to these different facets of the archangel as a figure that has been admired by multiple religious schools since ancient times, Chaignaud skillfully presents a wide variety of songs, in an equally wide vocal range. 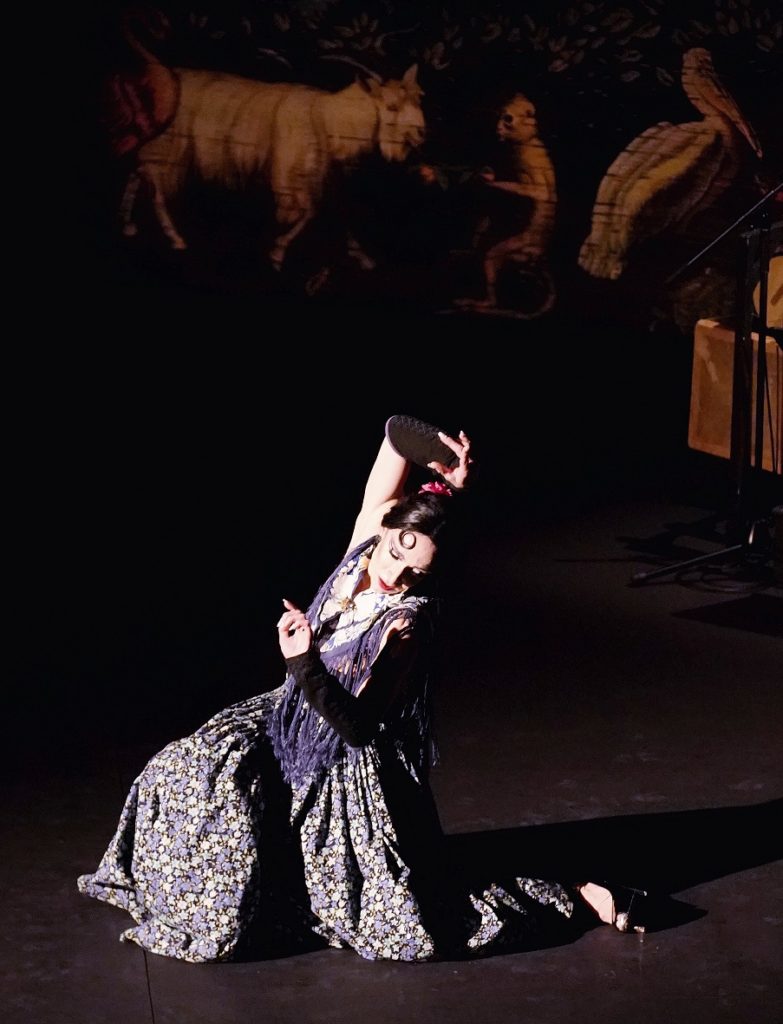 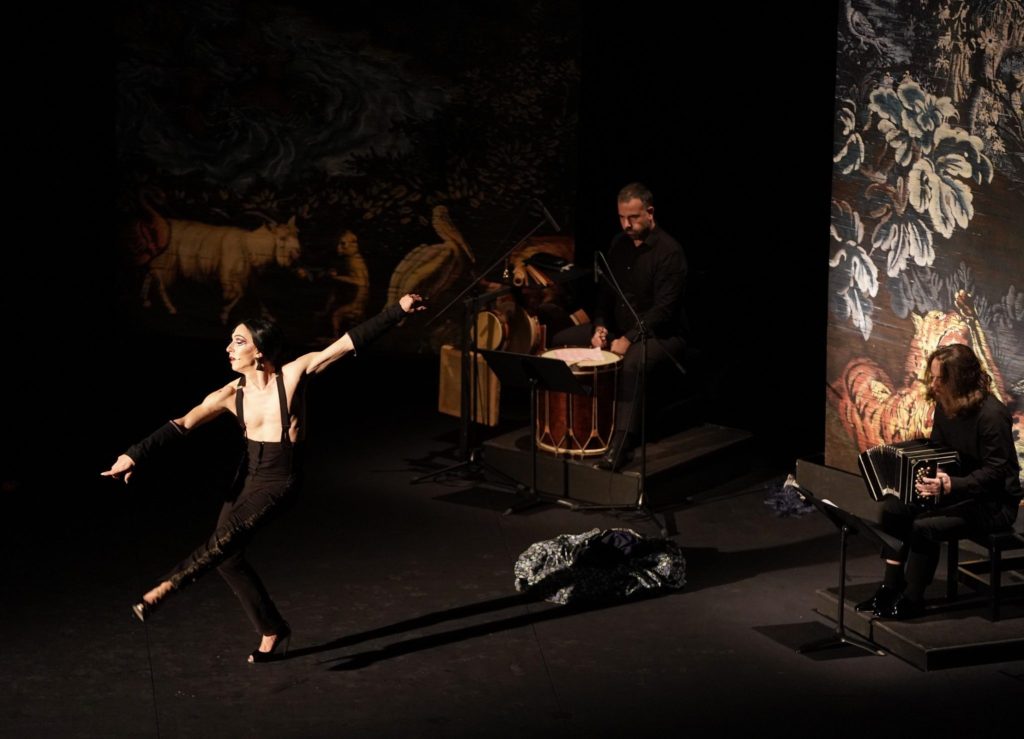 Around the middle of the third scene that is all about the gypsy La Tarara, Chaignaud replaces his skirt with a pair of trousers, but still wears his stiletto heels as he stamps the floor in a flamenco rhythm.

This is a precious opportunity to witness the clicking of heels, and the sounds of castanets and fragrant old instruments at the same time. Here we see actions from the realms of court dance and martial arts come together in an indescribable form in a single human body, the white skin of which does its own part in the magic. The suspenders, together with arm warmers from the wrists up to the elbows, create a number of black lines on the naked upper body, trisecting the chest and disconnecting the wrists from the upper arms. When these lines melt with the dark background, this creates an illusion of scattered body parts hanging in midair, reminding the viewer of the exchangeable parts and shaky identity of a human being. The general theme of “uncertain romances” is perhaps suggesting a complex state of not being easily classifiable. 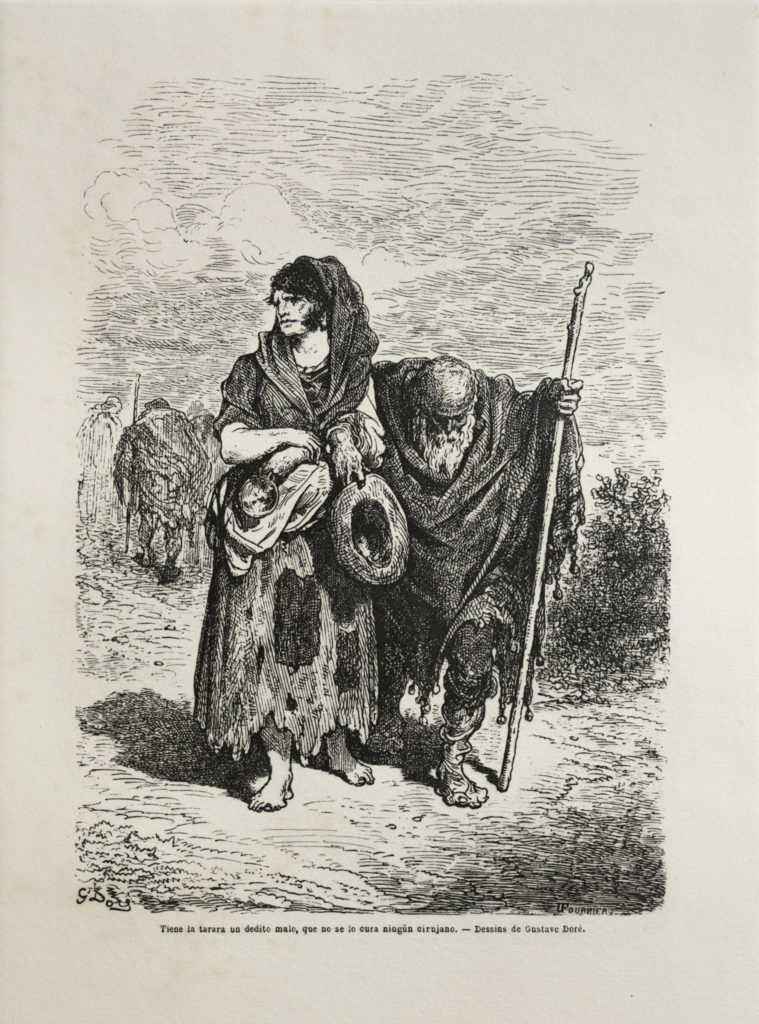 In a plaintive folk song telling the story of La Tarara, the lonely Andalusian gypsy tells the birds and beasts about the painfulness of living in the mountains. Extraordinary capacity to fascinate by multiple sexuality, and communicate with wild creatures, eventually leads to the character’s alienation within the community. This predicament that being ambiguous and breaking out from the norm necessarily involves, was also oozing from Laisné’s illustration in the booklet with lyrics translations and explanations that was handed out at the venue. It shows a figure with a rugged face and arms, walking with bare feet while dressed in a worn-out skirt… For this picture, Laisné took the image of the young woman in 19th century French painter Gustave Doré’s drawing “A hundred-year old beggar and his granddaughter in Berja” (1867), and added a “masculine” character to it. The modified image is pregnant with the features of social minorities that are prone to persecution. This exhibition of abundantly experimental performing arts was also charged with fighting spirit demanding respect for those who are discriminated for their sexuality or ethnicity.

[1]  The title refers to the Romance as a metric form used in octosyllabic epic poetry that was popular in medieval Spain.