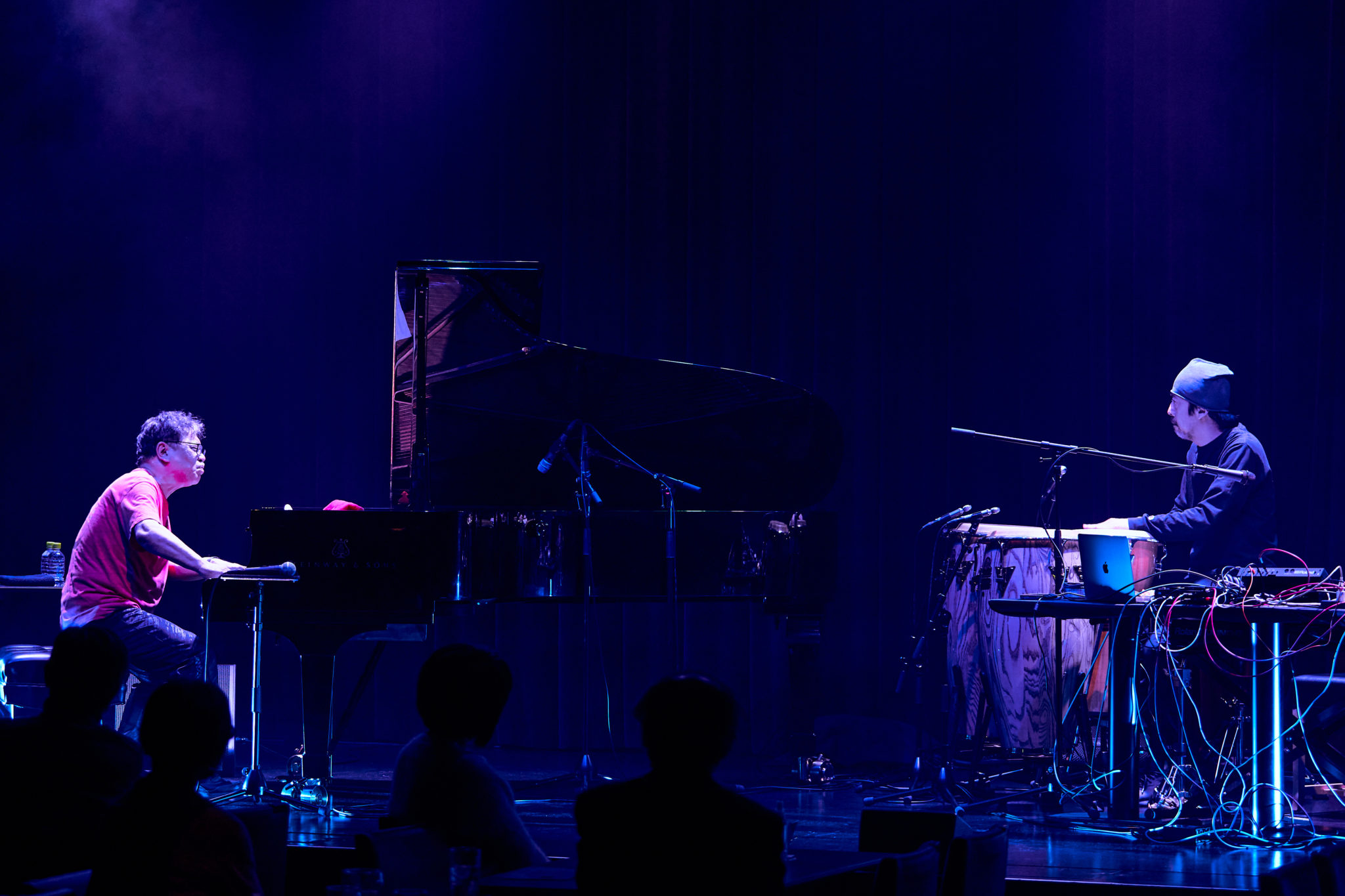 Jazz pianist Fumio Itabashi and sound designer/DJ Kuniyuki Takahashi teamed up for a joint gig at Billboard Live Yokohama on January 6, 2022. The two have worked together several times in the past, with Itabashi appearing as a guest on Kuniyuki’s tracks, but this was actually their first live performance as a duo. 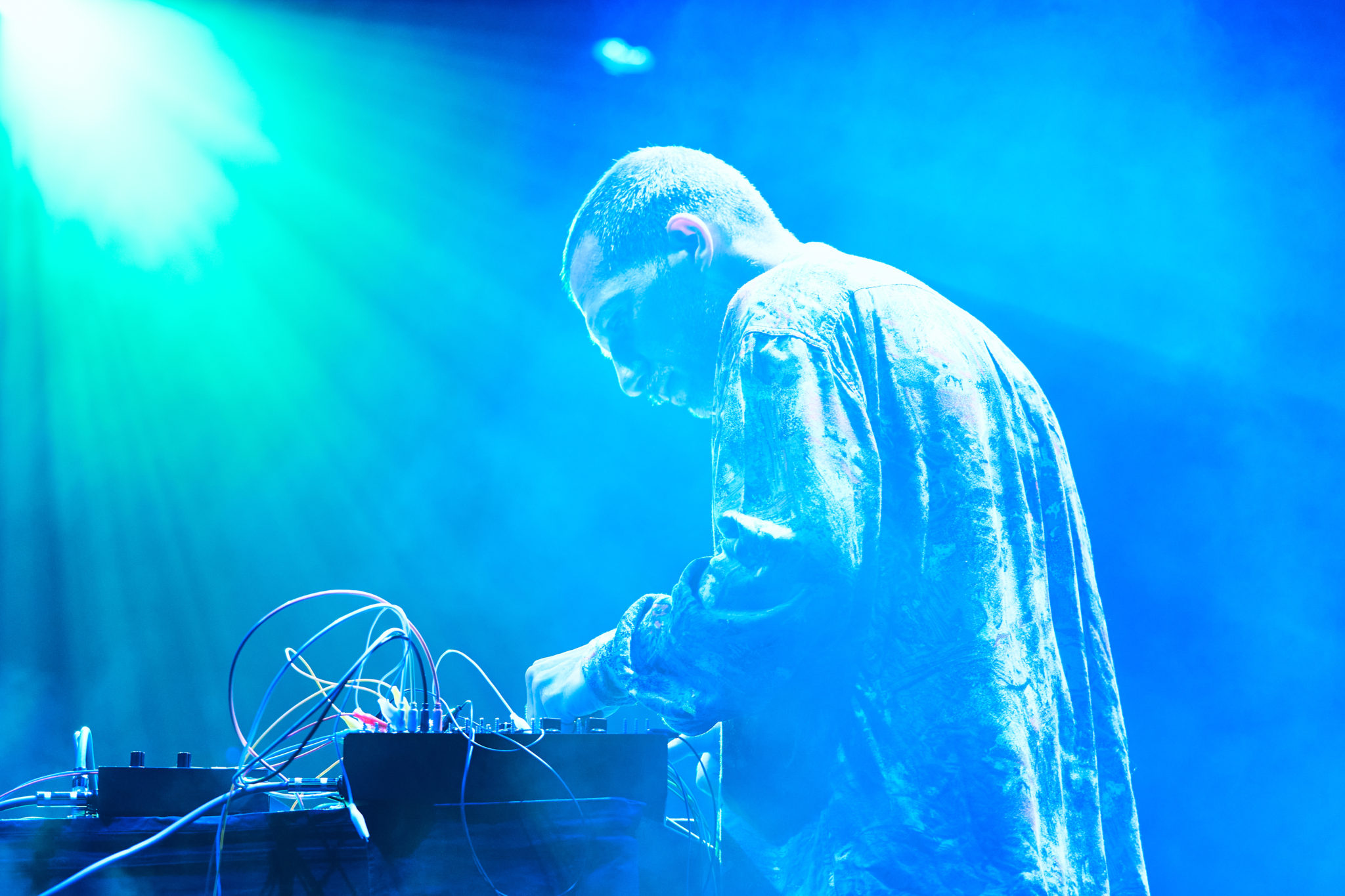 Jazz in the United States, its birthplace, is no longer merely a musical style, but rather a receptacle for diverse forms of expression that draws in a variety of genres and generations of musicians. Though the Japanese jazz scene isn’t quite as thriving as the American, many young jazz musicians in Japan have built successful careers in recent years, making a name for themselves by crisscrossing the worlds of jazz and pop. For them, making pop music doesn’t mean selling out; it’s seen rather as a stimulating way to conduct musical experiments. On a different note, the fact that musicians with roots in the Japanese underground jazz scene are coming up with some remarkably original tunes, the likes of which you won’t find in European or American jazz, is something that should merit more attention.

The pioneering generation of musicians who built Japan’s free jazz scene in the 1960s, including artists such as Masahiko Togashi and Yosuke Yamashita, were not content to wait on influences to be imported from the U.S., working on their own initiative instead to shape a new form of modern jazz. And their legacy is alive and well today. The performance by Itabashi and Kuniyuki was an impressive showing of how the things developed by the Japanese underground jazz scene over all these years can open up completely new horizons when they interact with sounds from outside that scene. 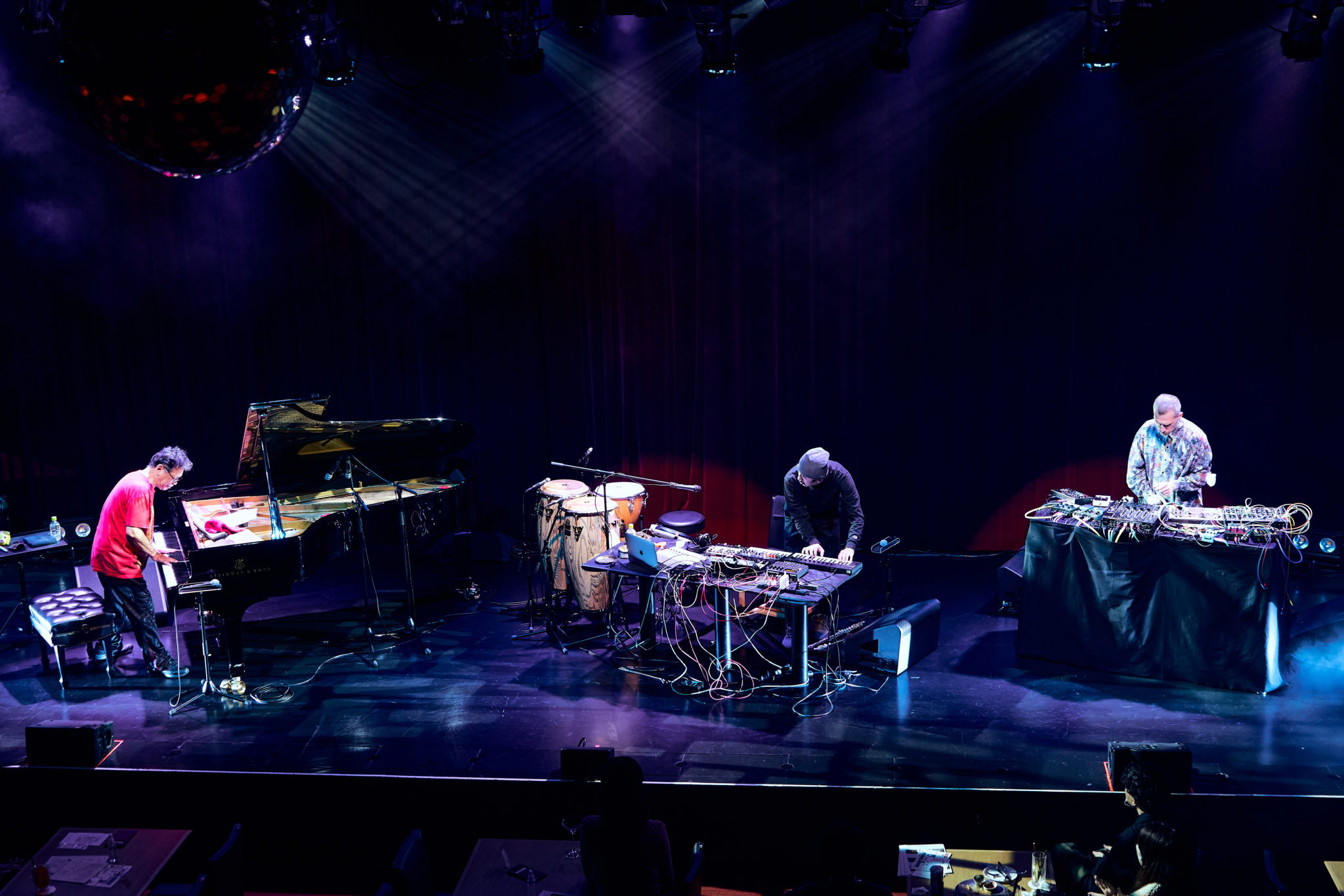 Let’s take a quick look at the Itabashi-Kuniyuki connection. The fruits of their collaboration can be heard on two of Kuniyuki’s albums, “Walking in the Naked City” (2009) and “Feather World” (2012), as well as on the 12-inch single “Watarase” (2021), a reconstruction of Itabashi’s well-known track of the same name by Kuniyuki and a few other house producers. On “Get Up With You,” one of the tracks on “Feather World,” the duo bring out their interpretation of African music, a topic that both Itabashi and Kuniyuki have been working on for a while. Kuniyuki’s conga-heavy rhythms are accompanied by Itabashi’s free-flowing piano playing, which really brings out the best in him.

The Yokohama show was quite close to “Get Up With You” in terms of style, with Itabashi’s piano providing the backbone while Kuniyuki contributed electronic drums and played the conga, adding soft synths at the appropriate junctures. Sessions combining programmed sounds with live instruments tend to see the instrument players get rather precise and formal as they adjust their playing to the guiding rhythm, but these two had chosen to synchronize their minds rather than their “grids,” conjuring up an impeccably raw session.

Even in the chic surroundings of Billboard Live Yokohama, Itabashi stuck to his usual style of playing halfway standing up from the get-go, beating the keys intensely with his elbows. And while he toned down the punch-playing somewhat after that, there was no drop in energy as he linked up with Kuniyuki’s sounds. 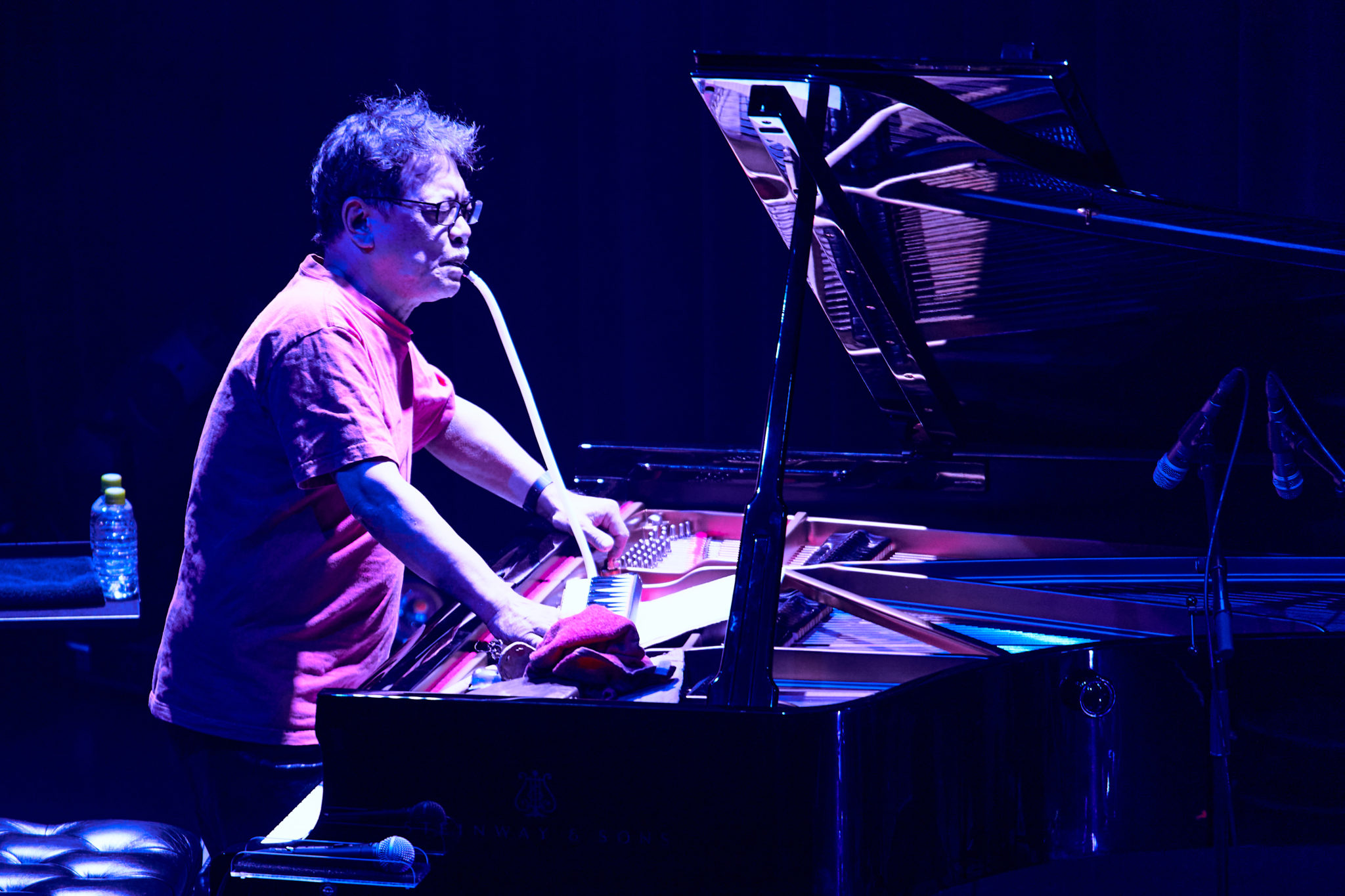 The duo played “Watarase” toward the middle of the gig, followed by a long Itabashi
solo. Kuniyuki’s sounds disappeared, and the playing that unfolded amidst the increasingly intense atmosphere was breathtaking. Building up sounds again from that point seemed almost tactless, but Kuniyuki’s meticulously textured beats and synths, acclimated after a pause, neatly scooped up the lingering heat of Itabashi’s solo. From there, the duo’s session only seemed to pick up momentum.

Itabashi and Kuniyuki share many things on the level of senses, such as a somewhat spiritual musicality, but perhaps the most important commonality between the two is their pursuit of an original style that incorporates a Japanese sensibility. Precisely because their respective forms of expression, the things they had been pursuing, crossed on stage that day, Itabashi’s intense, “soundless” percussion took on a different echo, while Kuniyuki’s sounds appeared to rise to a dimension not perceived at his solo shows. 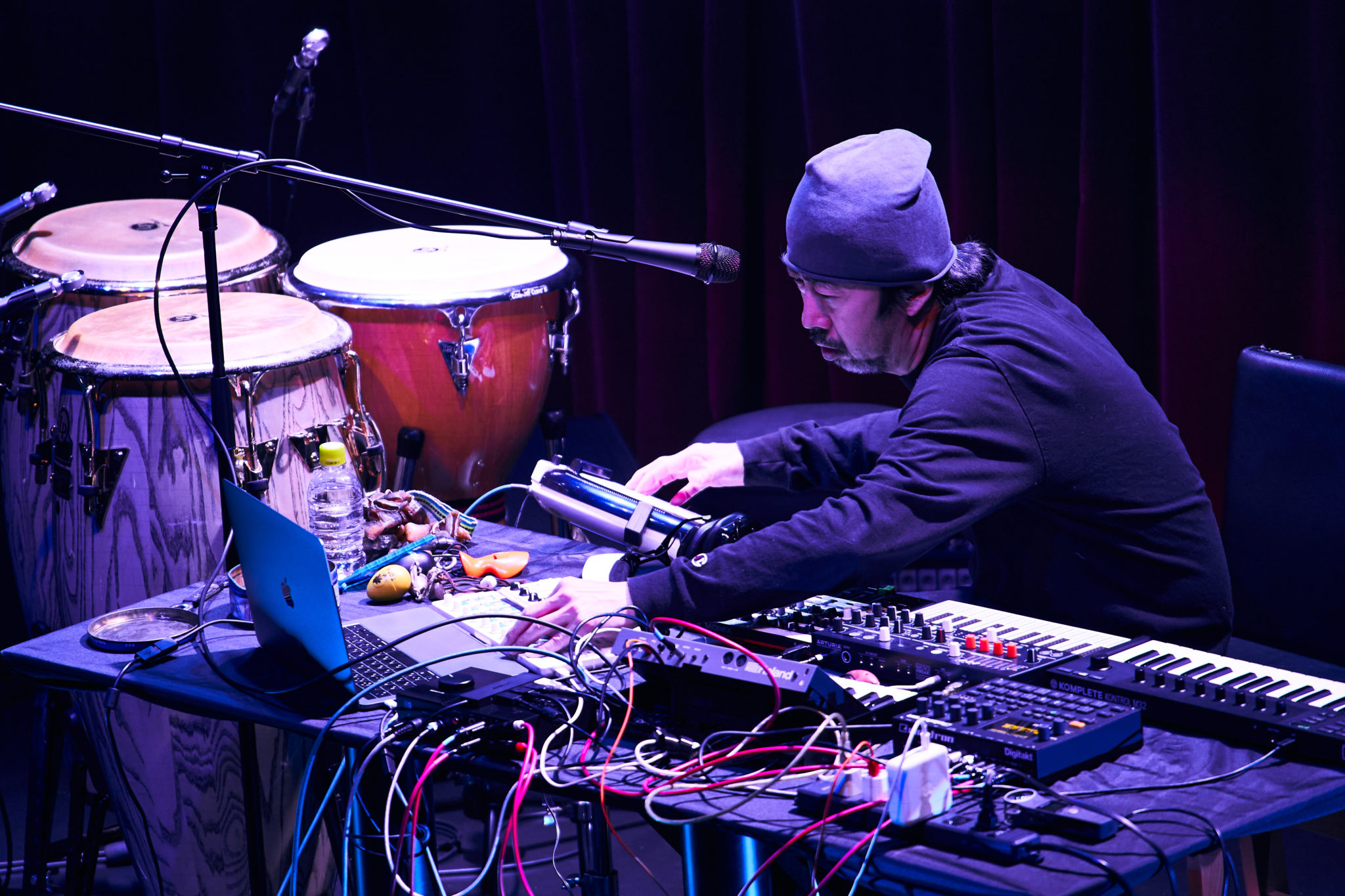 Genre-crossing sessions such as this one may once have carried the nuance of mere spectacle, somewhat like a bout between fighters of different martial arts. But musicians like Itabashi are remarkably broad-minded. When discussing the musicality of Japan’s “third generation” of free jazz players, to which Itabashi belongs, the critic Teruto Soejima, who studied the history of jazz from modern jazz onward both in Japan and around the world, wrote that “They aren’t super-avantgarde in a way that would shock the world. But they possess more than enough creativity to make you believe in the freedom of the mind.” Soejima was suggesting that rather than arguing over methodology, Japanese jazz was beginning to move toward pouring its entire force of expression into instrumental performance.

Some time has passed since the Shibusashirazu Orchestra, led by Daisuke Fuwa—the most prominent representative of Soejima’s “third generation”—won widespread acclaim in Europe. However, if you told me that the Japanese scene has been stagnant ever since, I’d argue the opposite: the boundaries of jazz are being expanded in distinctive ways in Japan too, with cross-generational collaboration giving rise to new forms of expression. The session at Blue Note Yokohama was the fruit of Kuniyuki’s deep respect for the musical edifice constructed by Itabashi. It’s my sincere hope that more people will get to experience shows like this in the future.