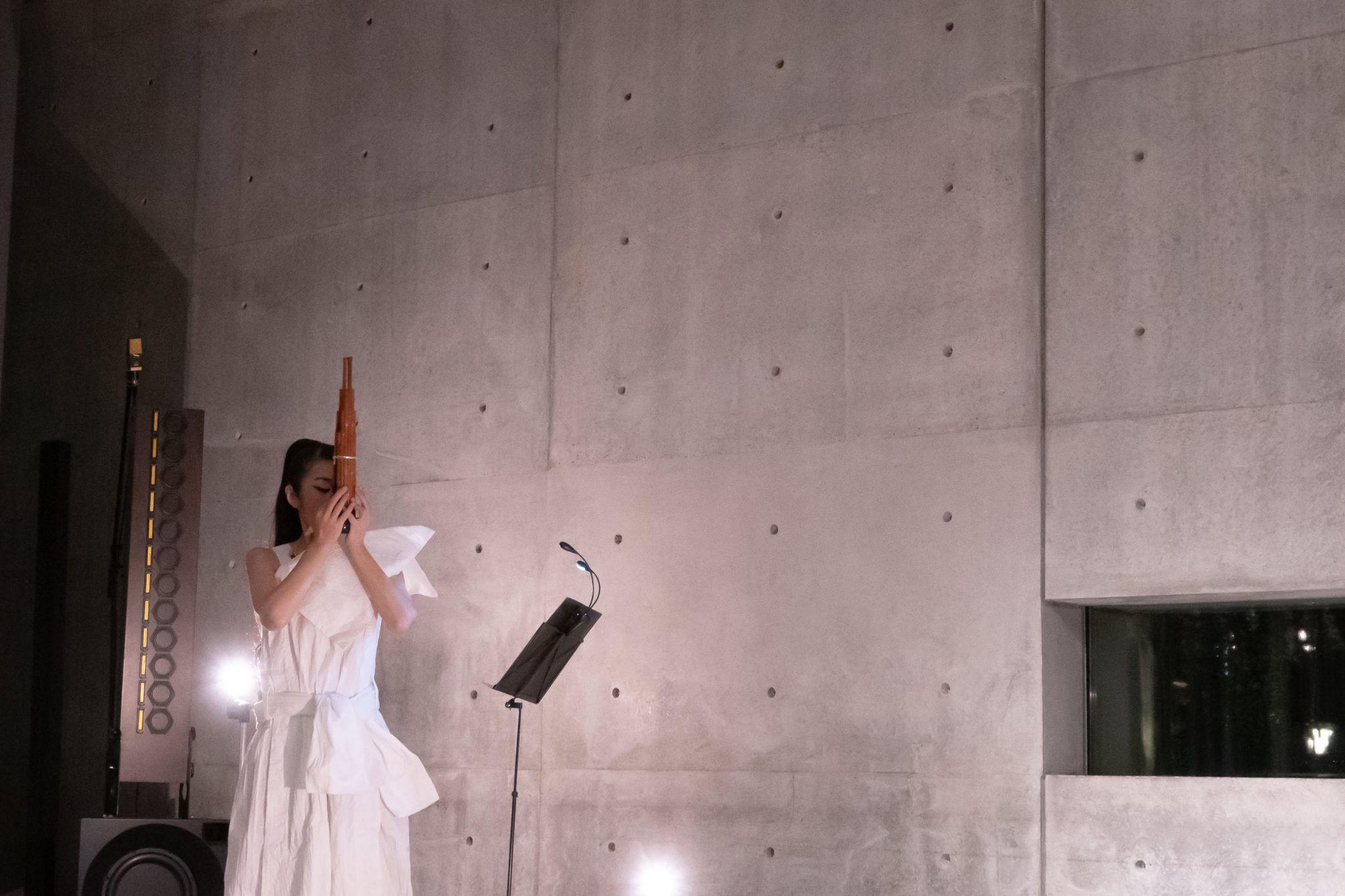 Hoshigatami is the name of a project launched by Tamami Tono, a leading Japanese sho (flute) player. The central idea behind the project is to play music mainly on the sho, but independent from classical gagaku, at special locations such as the Chukura Cavern on Tanegashima or Kyoto’s Kiyomizudera, in accordance with the respective place’s own acoustic properties.
“Constellations of sounds that listeners can discover for themselves within the sonic universe.” Based on this concept, Tono creates music and sounds that are suited for the respective time and place.

The stage the artist chose for the Hoshigatami project’s performance in Tokyo is the Gallery 3 of 21_21 DESIGN SIGHT, located on the premises of the Roppongi Midtown complex (garden). The interior of the Gallery 3, which opened in 2017, seems to be made up of multiple triangular spaces. This was the first live concert held at the venue – indeed an environment that promises to have rather interesting acoustics.
The general theme of the performance that was shown here was “garden within the cycle of the seasons,” for which the oddly shaped space was made to look like a cave in the middle of the city, and function as a musical instrument in itself that produces sounds. 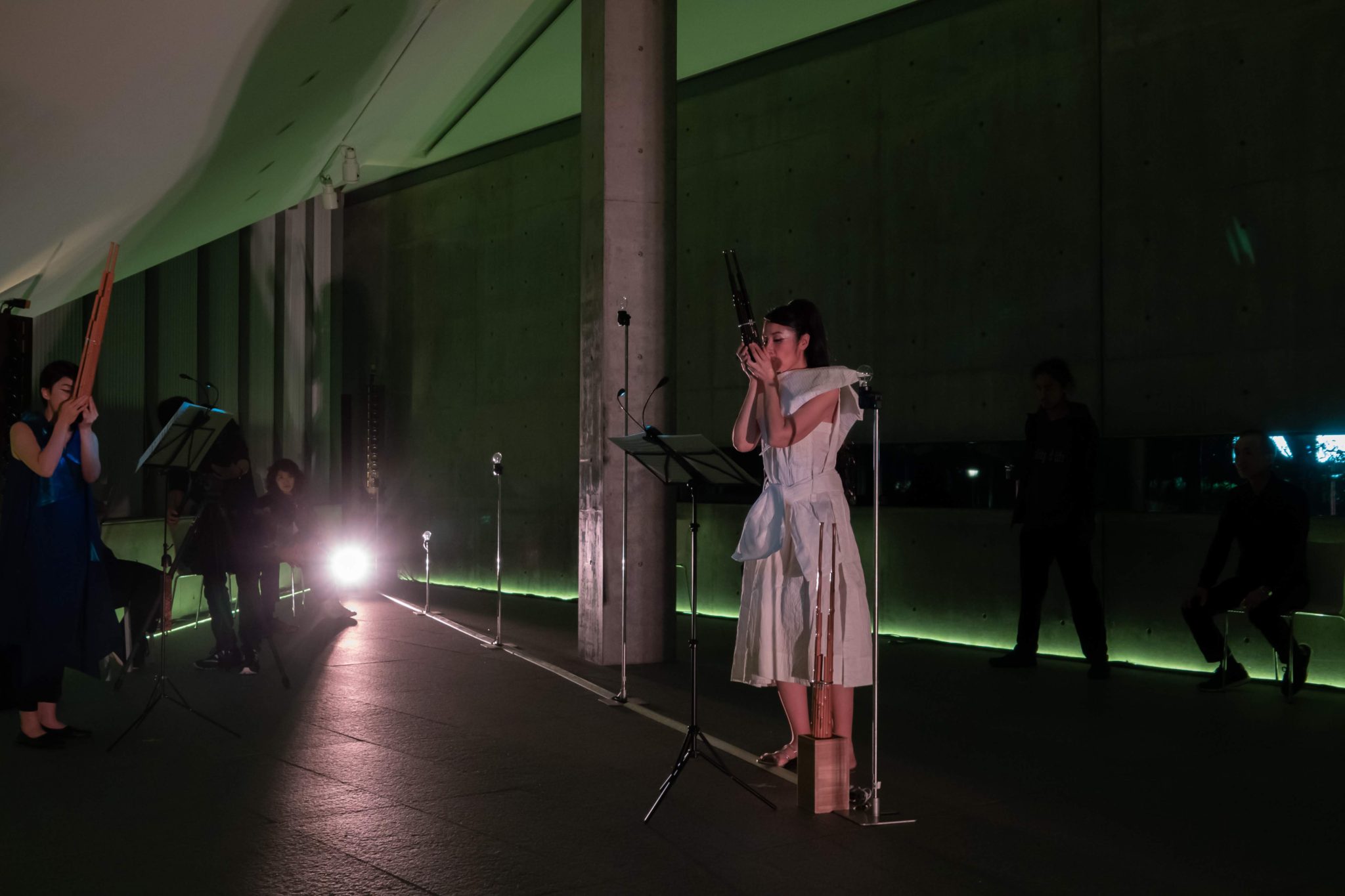 Performed was an automatically computer-generated work based on digitized data of the unique graphic score and instructions in Toru Takemitsu’s ”Seasons,” a composition for Baschet’s musical sculptures and electronic sounds that were presented at the Osaka Expo in 1970, in concert with an installation of lights and sounds that incorporated among others elements from Dai Fujikura’s piece that was also part of the program.
The performers – Hanako Nakamura, Ai Saotome and Tono herself – are members of the gagaku performance group Reigakusha, while at once also engaging in various other activities. Tamami Tono delivered a magnificent performance as guests for the “Bulgarian Voices Angelite” concert at Sumida Triphony Hall in September.

The walls of the Gallery 3 are largely made of glass, which creates a feeling of connectedness with the garden outside. Inside, two light projectors on the floor emitted blue and white light, while light bulbs on stands of varying height were set up in a wave-like arrangement. The afternoon concert (following one on the morning) started at 16:39, timed to coincide with the sunset.
The music started against the visual backdrop of a “wave of light” created by nine light bulbs that became gradually visible the darker it was getting outside. First on the program was the classical gagaku piece “Toki no choshi,” followed by Takemitsu’s “Seasons” performed in concert with the installation. The four super-directional speakers set up at the venue were designed by Shiro Takatani, whose group Dumb Type’s exhibition “Actions + Reflections” is currently showing at the Museum of Contemporary Art Tokyo, while zAk was in charge of spatial acoustics, and Kenji Yasaka of the sound programming. Played quietly from the speakers were field audio recordings that Tono continues to collect. The artist emphasizes how much she treasures the sounds of the sea at Tanegashima, and of gravel at the coast at Oiso.

Visitors were free to sit down and listen to the music from any place they liked inside the venue, and as the speakers were highly directional, it all supposedly sounded very different depending on the location. Add to this the complex shape of the interior space that obviously made also the live sho performance sound totally different at different points inside the venue, one understands that these little differences made this concert an exciting opportunity for each visitor to enjoy a singular experience from the place where he/she chose to sit down. For a regular concert, the sound system is usually set up so that all sounds are equally audible at any place inside the venue, but here we are in an urban cave, a setting that is supposed to be a “natural environment,” so it is only natural that things sounded different at different places. In other words, it was a different, individual sonic experience for each visitor. 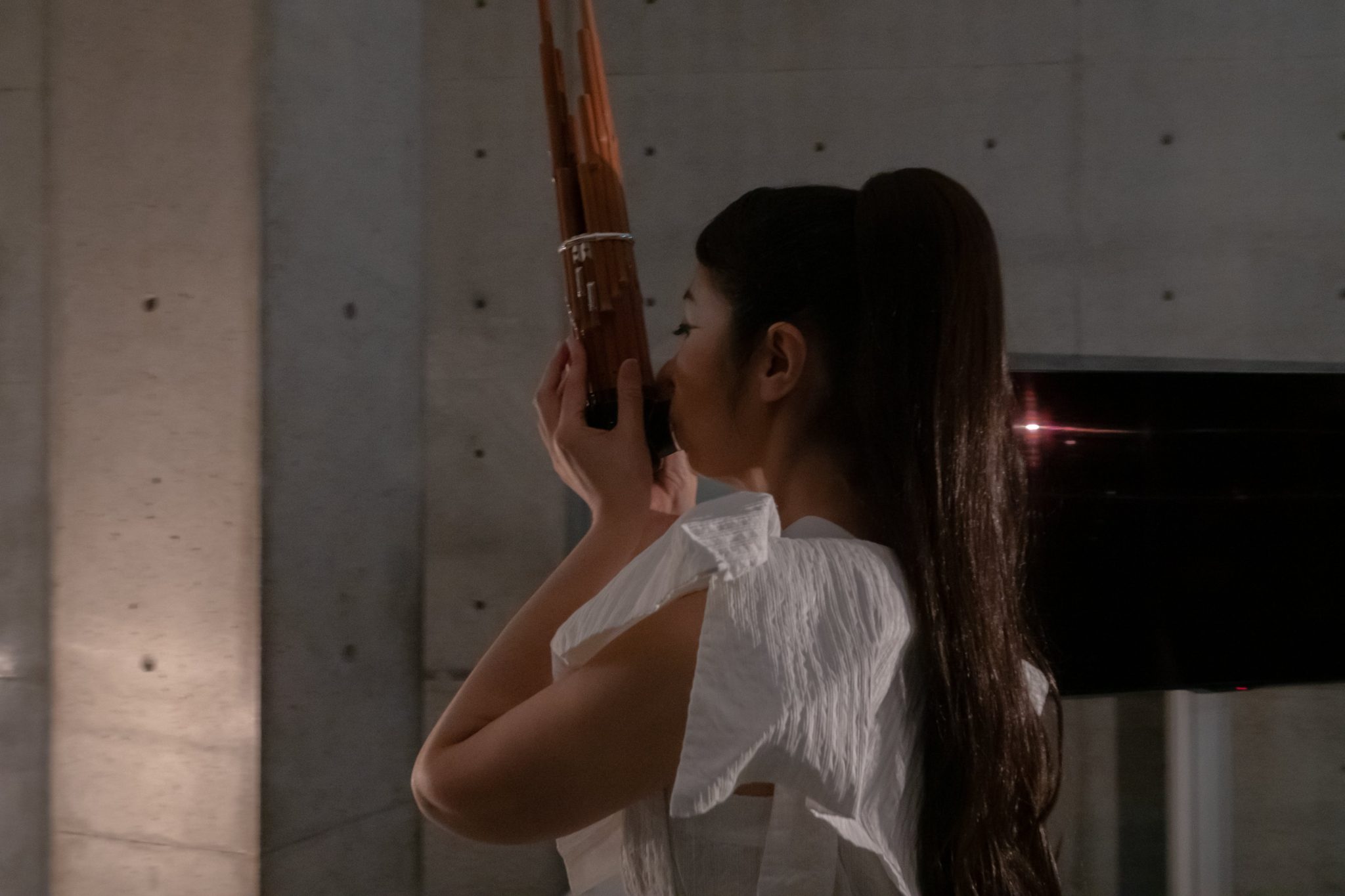 The third piece was “Mabayui hizashi o aogimite” an original composition by Tamami Tono. Outside it was completely dark now, and every once in a while one could hear the bark of a dog, which made me wonder how the dog was perceiving the light-flooded space behind the glass walls that must have been vibrating according to the sound.

The program closed with “Obi for Sho and Electronics” by Dai Fujikura, a contemporary composer based in the UK. This brand new piece was made for the Hoshigatami project, and performed here for the first time ever. Quite in the style of a composer who has a profound knowledge also of electronic music, here Fujikura combines the sounds of a granular synthesizer with staccato sho playing. At the end of this piece, Tono leaves the venue through the open doors while continuing to play the sho. Now that it was taken out of the closed interior space, the sound of the sho dispersed into the starry sky.

Born 1966 in Fukui prefecture. Freelance editor and writer, formerly worked as an editor for the monthly magazine Kokoku Hihyo (Madra Publishing). Next to authoring the book David Bowie and Japan When I Met You 1947-2016 (DU Books), he was involved as an editor in a number of publications including 40 ymo by Kenji Miura (Kadokawa). At present he regularly writes for JBpress autograph (“Ongaku enso” https://autograph.ismedia.jp) and GQ Japan (“Kyoju dosei” https://www.gqjapan.jp).