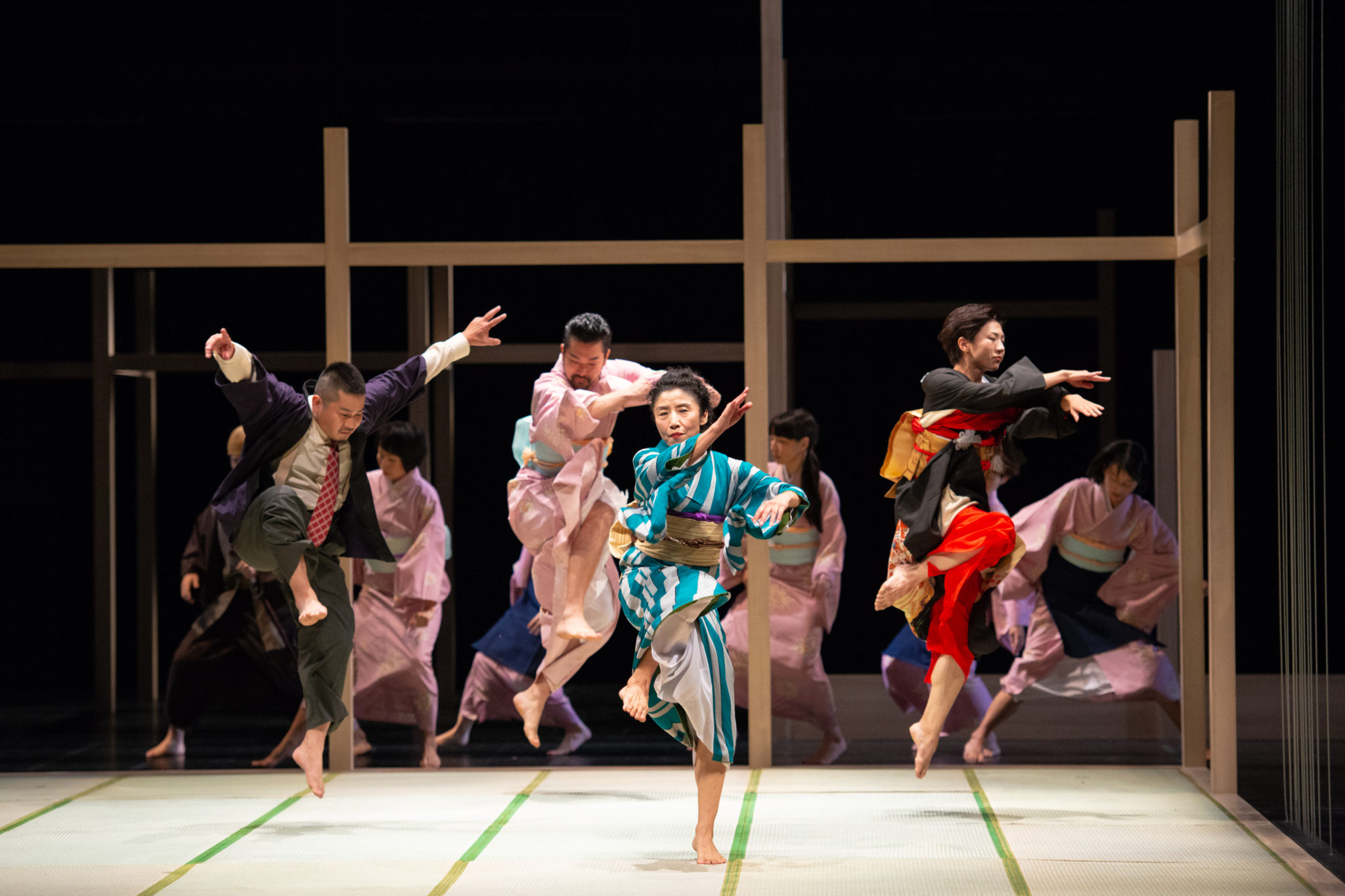 Never would I have thought that I’d be able to see this masterpiece again ten years later!

Set in a Japanese style hostel that could be straight out of Hisaya Morishige’s comedy film “Ekimae Ryokan” (1958) or some kind of typical Japanese television suspense drama, with everything from character setting to parties, scuffles and love affairs being mere groundwork, “Haikiko (Vent)” by Idevian Crew, from beginning to end, develops somewhere between theater and dance.

The hostel’s interior is very effectively presented in the form of a skeletonized set (by Masako Ito) that resembles the medieval “Fukinuki Yatai” picture scroll. Pillars, lintels and door sills function as a grid to show a linear perspective, articulating layers of depth with a drawing room in the front, a corridor behind it, and a space in the back, and creating frames juxtaposed horizontally. This grid pattern derived from Japanese traditional architecture structurally supports the mesmerizingly complicated choreography, while at the same time certainly boosting the depth and clarity of the viewer’s spatial perception. 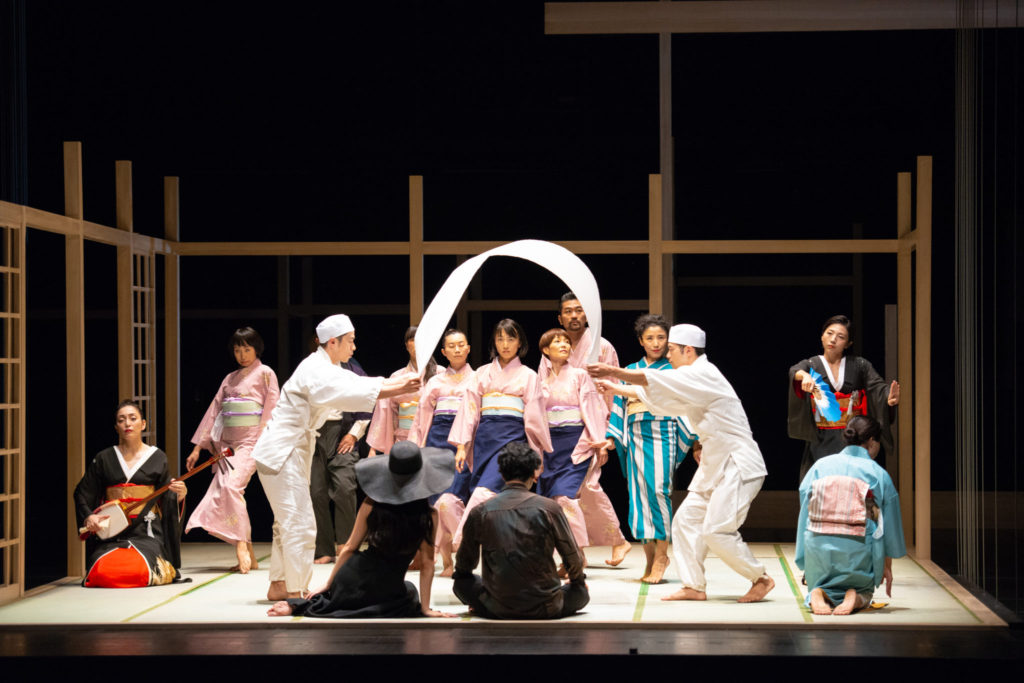 The main ingredients of Shigehiro Ide’s choreography are countless tiny scraps of “quotes” that his pieces are studded with. They are taken from rather nondescript movie scenes, phrases and rhythm patterns borrowed from jazz dance, ballet or traditional Japanese dance, or conventional motions found in manga and anime. What clearly sets this style apart from postmodernist choreography is that these elements are used for appealing to the viewer’s vague memories, rather than for making references to specific source. Whenever we encounter things that “somehow seem familiar,” we unconsciously project our memory onto them to fully grasp as particular images. Ide picks up details from the bits and pieces of such materials, and connects them with other details. This is how he draws from a giant database of things that “somehow seem familiar,” to build dense movements and sequences that unfold moment by moment in unpredictable ways, which is again exactly what makes his choreography so complicated and at once downright catchy.

Let me give you an example. While the cooks prepare a dish for a party, the waitresses repeat 8-count steps behind their backs. The way they straighten themselves up and strike poses when stepping forward, and shiver and shake when stepping back again, is quite funny and leaves a lasting impression, whereas there’s an air of “prickly turning away” in the former, and a sense of “trembling with excitement” in the latter, both of which are stylized gestures often found in manga or anime. Once the waitresses have left, for some reason one of the cooks throws himself onto the tatami mat and violently shakes his body in spasms. Like “a tuna just landed,” which carries a stereotypical connotation of “very fresh meal” for Japanese. Witnessing this, the viewer would faintly remember those waitresses’ movements. In retrospect, they did look like fish taken out of the water, and now it’s the cook’s turn somehow… As a matter of course, one can hardly be aware of this when seeing it. It’s more the operations of images in detail that come across so vividly as the viewer receives them unconsciously.

In “Haikiko,” such kinds of sequences unfurl in a multiple-linear fashion, brilliantly responding to the dense sonic tapestry of EDM tunes. There are unlike events taking place simultaneously, such as line dance performed in unison and childish fray for example, in timelines that run parallel at first, but then continue to branch out and change. Something new has begun before we knew it, and while being preoccupied with that, what we have just seen before has already turned into something different. It is through repeated viewing that one gradually understands just how carefully Ide’s choreographies are designed to sneak through the viewer’s consciousness, which also makes each piece more enjoyable when seeing it again.

I’ve seen this piece twice this time, but I still feel eager for more. I really hope that restaging masterpieces will become an established practice in the realm of contemporary dance!

Daisuke Muto is Associate Professor of Dance Studies and Aesthetics at Gunma Prefectural Women’s University, and also an independent dance critic and a choreographer. His research interests are global history of dance with a focus on the 20th-century Asia, and theory of choreography. He is the co-author of Choreography and Corporeality, 2016, and History of Ballet and Dance(in Japanese), 2012. His papers include “What Happens When Contemporary Artists Learn Folk Performing Arts” in Bulletin of Gunma Prefectural Women’s University, No.38, 2017, and “Stepping into Ecology of a Dance” in Bulletin of Gunma Prefectural Women’s University, No.39, 2018. Muto is the program director for international exchange division at Sanriku International Arts Festival.