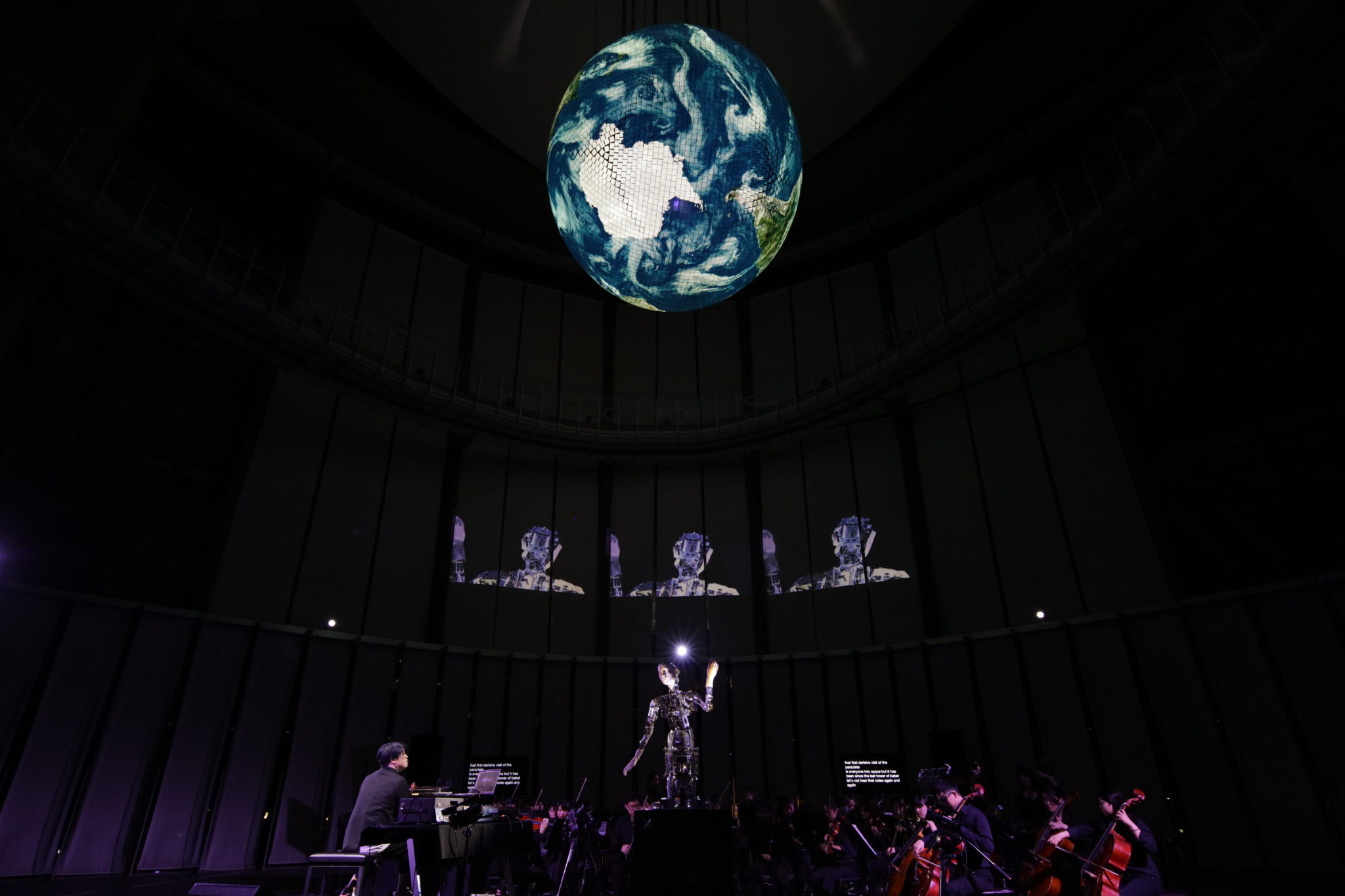 Music today, regardless of genre, is pursuing “vocalism” with an intensity that could make you believe the human voice is the final frontier. The methods for this pursuit range from the incessant use of auto-tuning in mainstream American music and the maturation of voice- and vocal-sampling methods in bass and experimental music to the development of new software such as the Prismizer. What all these techniques have in common is that they are used to alter the voice to remove some of its humanity, shifting the focus onto the emotions that result. 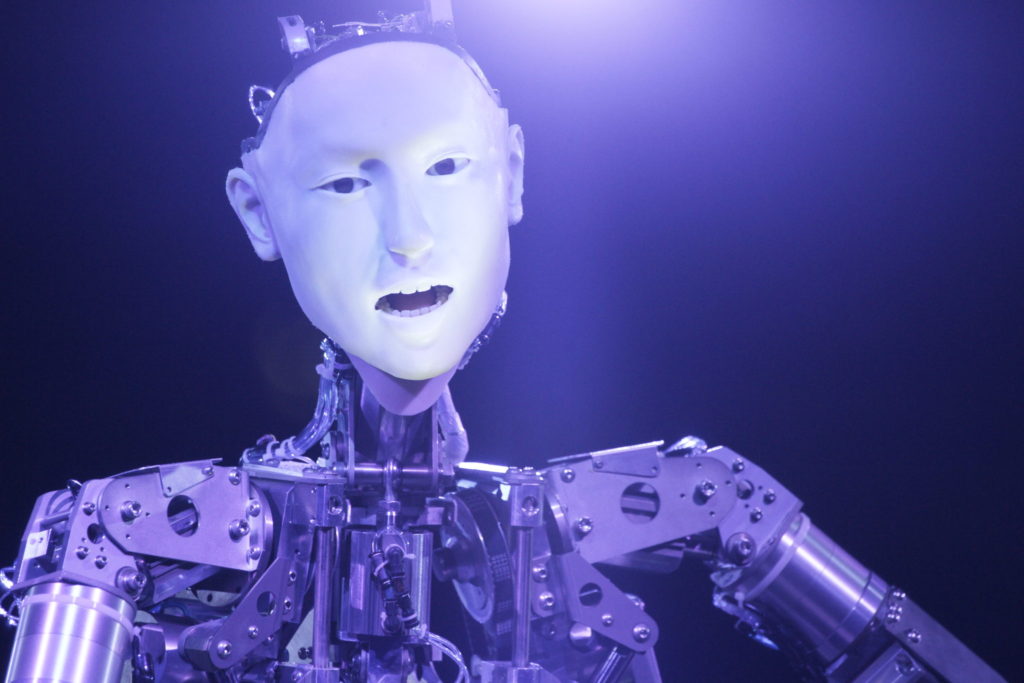 In the opera “Scary Beauty”, in which the roles of singer and conductor are played by an android called Alter 2, the humanity of the voice and vocals vanishes almost entirely. This positions the work on the very edge of the modern music scene.

Alter 2’s metallic voice and vocals contain only the faintest residue of the humanity expressed by the “vocaloid” Hatsune Miku in “The End”, Keiichiro Shibuya’s first opera. The sound that this extraordinary format brings to “Scary Beauty”, in which the android also conducts a human orchestra, has an unprecedented force.

The opera begins with a piece that sees Alter 2 read a William S. Burroughs cut-up text rearranged with the power of deep learning. Meanwhile the orchestral part, in which various tones collide in space like they were depicting warfare, reverberates as if competing with Alter 2, giving the impression of a composition that, in a way, updates the work of Clément Janequin. 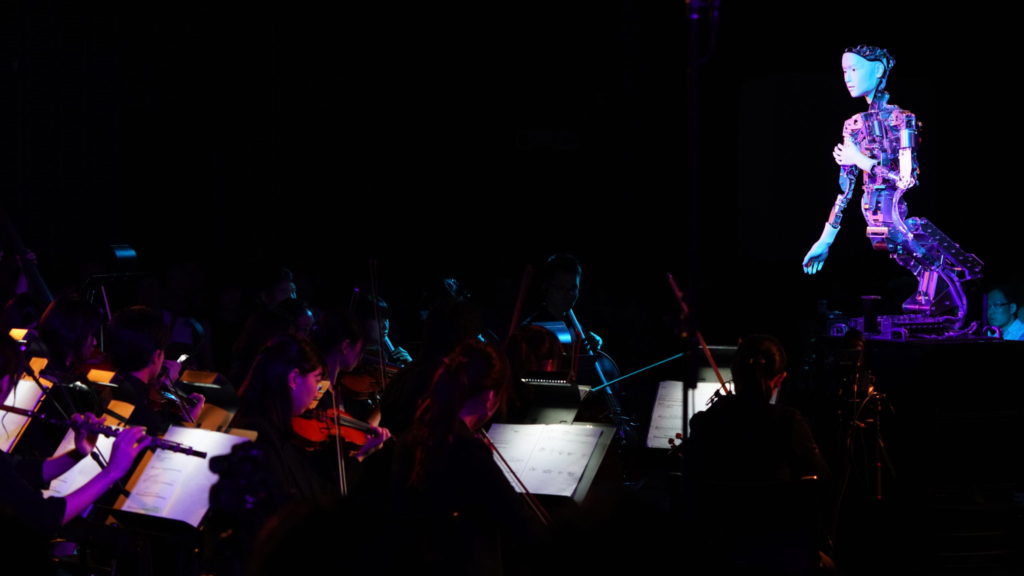 In “Scary Beauty” and “The Decay of The Angel”, Alter 2 lifts its voice high while conducting a symphonic score. This conducting incorporates mechanical fluctuations that differ from human ones, brought about by stimuli from the music, lighting, and other elements in the hall. Reflected into the music, these fluctuations bring about minute tempo changes that are impossible to predict. In addition, the choruses of the addictive melodies Alter 2 sings have the effect of mixing musical intoxication with the eeriness we feel when confronted with a singing android.

The opera ends with a composition by a program called Word2Vec, which creates vector representations of the meanings of words. The program, which was fed an extract from Wittgenstein’s “On Certainty” for the purpose, has churned out a piece in which Alter 2’s sigh-like vocals intersect polyphonically with the instruments’ elegantly flowing tones, opening up new possibilities in the domain of machine composition.
At the very end, Alter 2 sings “Scary Beauty” accompanied by Keiichiro Shibuya himself on the piano – a scene that appeared strangely graphic to me.
Next set for a world tour, this is an opera sure to undergo significant change from now on. The grand journey of “Scary Beauty” has only just begun.

Music critic, writes about music and the culture surrounding it for publications including iD-Japan, Eureka, OTOTOY, Mikiki, ele-king, The Sign Magazine, and Jazz The New Chapter. His younger brother is New Japan Pro-Wrestling wrestler Tetsuhiro Yagi.