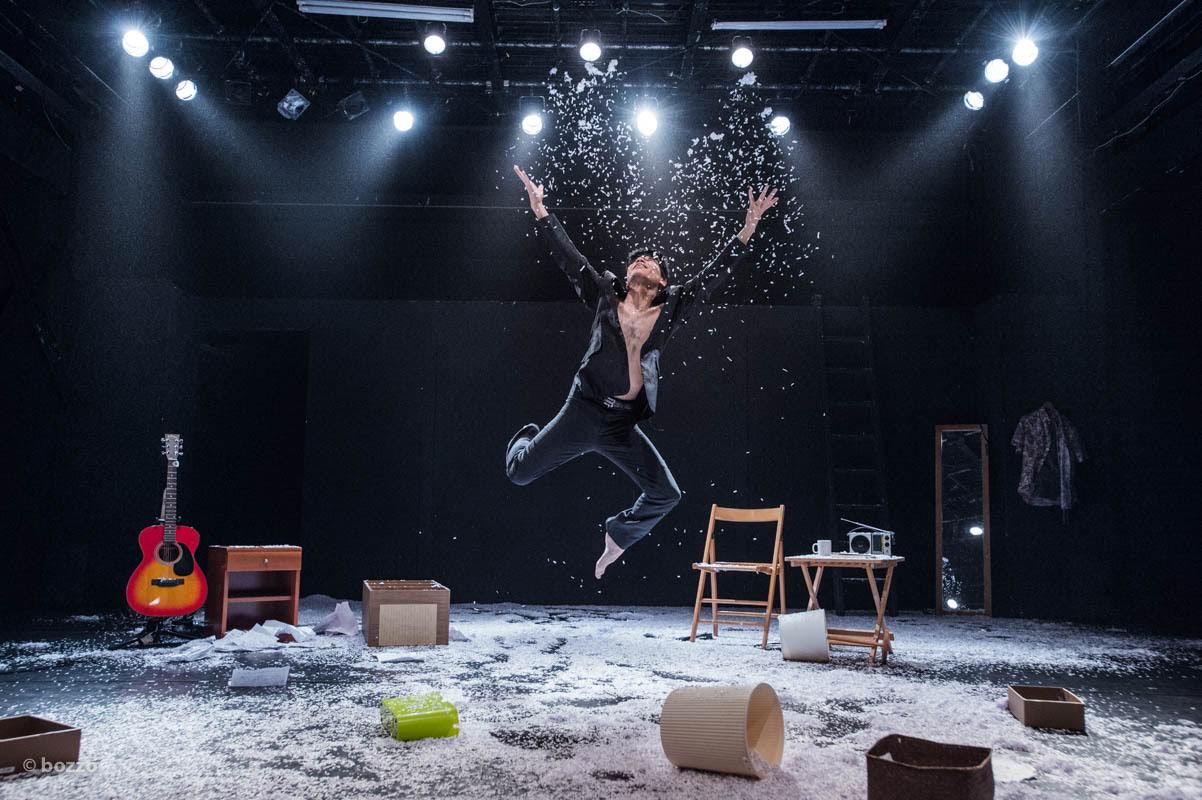 Sometimes the “ailing dance mistress” approaches us with a familiar song, and sometimes it turns into a snowstorm that blows us away.

A former student of Butoh dancer Anzu Furukawa, Kim Itoh teamed up with Tsuyoshi Shirai for a performance titled after Tatsumi Hijikata’s monumental piece “Kinjiki (Forbidden Colours)” in 2005. That first solo performance of this piece in 16 years could be described as a literal clash between Itoh’s body and Hijikata’s words.

A man enters the stage that looks like a room in a house during its owner’s absence, picks up a book from a desk, and begins to read aloud, which is when the surreal world of the “ailing dance mistress” emerges.

In this piece, Itoh surrenders himself to Hijikata’s somewhat shamanistic words, while on the other hand cleverly bending those words in the manner of a circus clown. The man responds to the words that gradually sneak into the body as they turn from an almost inaudible mutter into recitation, by dismantling them into light and easy song and wordplay, and eventually throwing the heap of scattered words into the shredder. But before long, the batches of paper that he thrusts into the machine one after another get stuck, which at once signalizes a change of key. Accompanied by a caption that translates into “rainbow man in the winter,” the man transforms into a different person, and the stage gets covered with “snow” in the form of all those words cut into shreds. This instantly reminds the visitor of the frightening atmosphere at the beginning, when the doors opened and entering visitors found a stage covered with projections of quotes from the original Yameru Maihime. 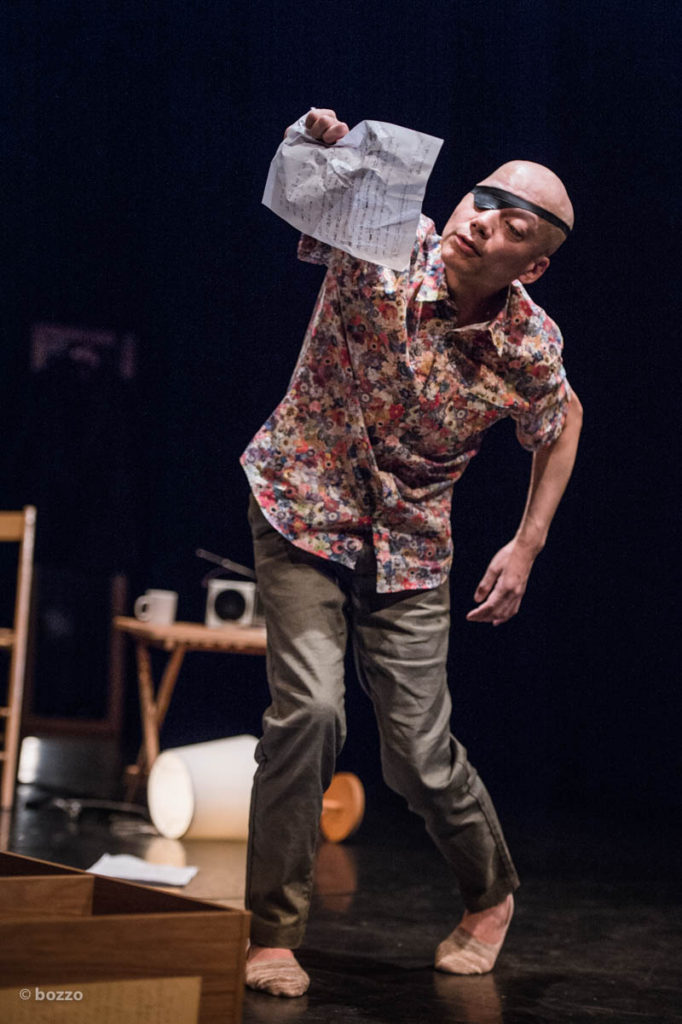 Recordings of those words coming from a radio trigger a complete change of the man’s movements, which were mostly limited to gestures and walking in the first half, and now take on a mechanical kind of quality. Accompanied by sounds loud enough to make one’s ears ring, and visuals like a vertigo approaching, the stage is brightly lit up as it turns all white with snow coming from all across the room. The man gets covered with snow that even gets into his mouth…

The quotes from Yameru Maihime function as triggers alienating the everyday – changing a summer day into a snowy day in the winter (according to the transition of seasons from summer to winter in the book), and transforming the man into ”someone unfamiliar.” Acknowledging these magic powers of words, while at once grabbing the tails of words that move away due to the intentional “modifications” made when speaking, to pull them back into familiar territory – in other words, the antagonism of two opposing vectors of language in in- and outward direction is what defines the originality of this work. 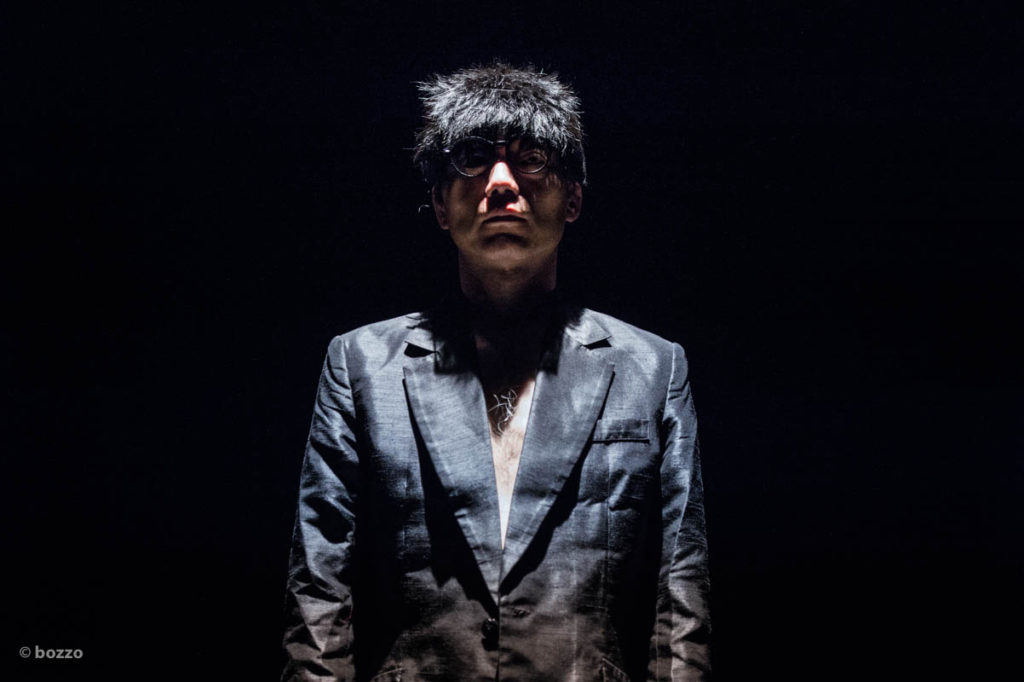 The moment the sound and light reach their peak is at once when the world of the “ailing dance mistress” vanishes again. Dressed again like at the beginning, the man adeptly fixes the messed-up furnishings, and leaves behind only a burning table lamp in the center of the stage as he walks out of the room with the words, “Ojama shimashita” (“thank you for your hospitality”) – completely incorporating the characters of “I as a boy,” ”rainbow man in the winter,” “white-cloaked man” and “black-cloaked man.” (performance at July 29)