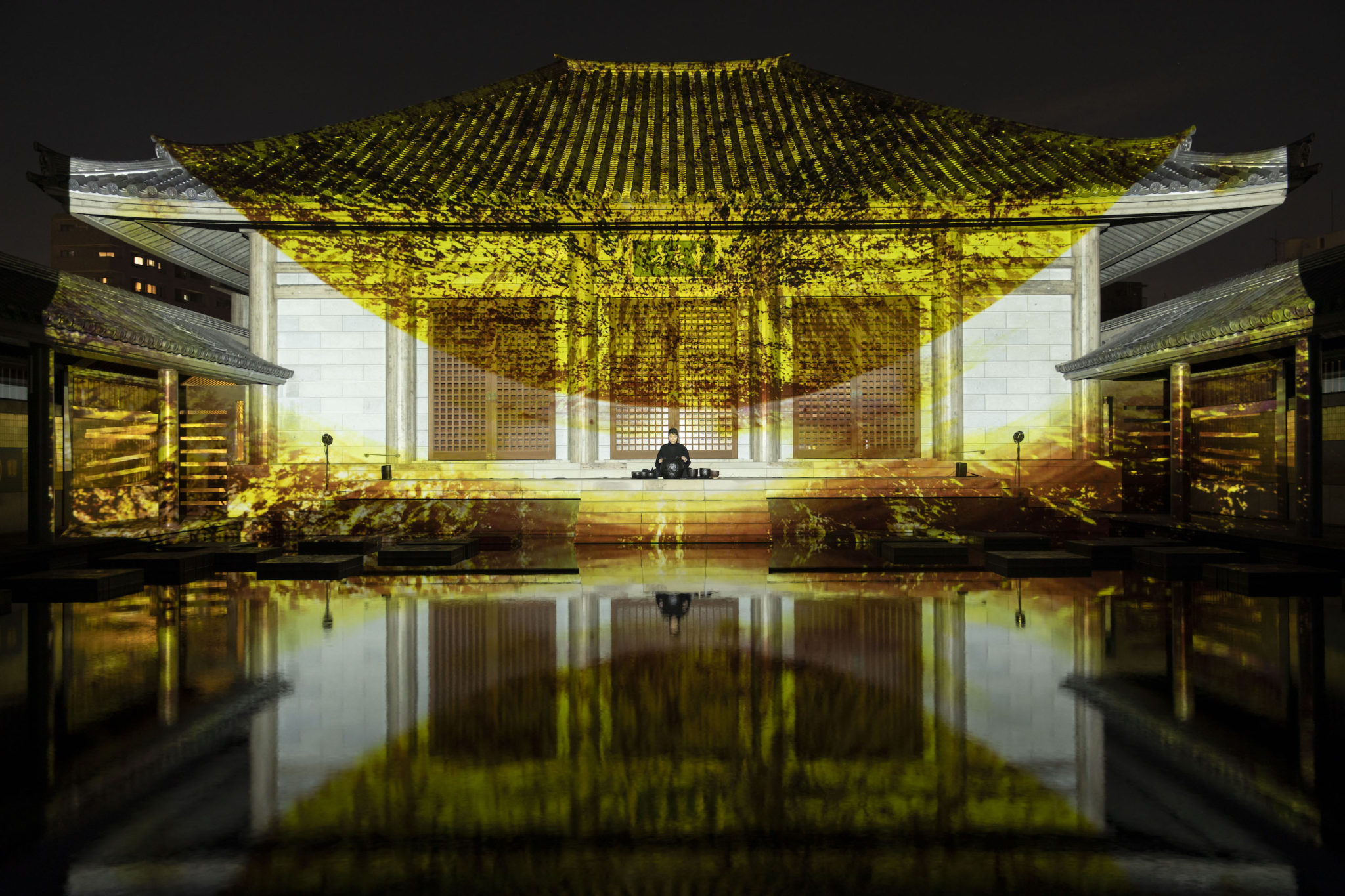 The twin audiovisual performances “At the Kiwa” and “Touching Kiwa”—a collaborative effort by creative director Tomoko Mukai, who specializes in works of spatial projection presented mainly on urban surfaces, and percussionist Sachiko Nagata —took place this August at the Soto Zen temple Tochoji. Rescheduled to this summer due to the pandemic, the event was held in between the also-postponed Tokyo Olympics and Paralympics and made for an opportunity to contemplate the nature of contemporary live performance and spectacle.

Sachiko Nagata, who is also known for her efforts to restore and play the Baschet brothers’ “sound sculptures,” plays the Hamon, a percussion instrument akin to a slit drum, developed by an artist of contemporary sculpture. Each Hamon, crafted by modifying a steel surface by hammering on it and causing cracks, is unique and offers a different combination of distinctive sounds.

The one-of-a-kind shape and size of each instrument means that the scales and tones produced when one is played, by lightly drumming on the surfaces with a mallet, are unique as well. A small Hamon produces a twinkle that evokes a suikinkutsu, a garden ornament through which water drips into a small pool, producing a gentle sound said to relax the senses, while a large one gives off a heavy, enveloping tone reminiscent of a bronze bell. When the performer drums rhythmically on the instrument, which is laid out in a half circle in front of her, stratified, undulating tones emerge and retreat, relaying how the various sounds fluctuate when interacting with each other. While the sound of the Hamon evokes gamelan and minimal music, the sense of intoxication it produces feels harder, like that of thick blown glass; while primitive, it gives off an intellectual air. That’s precisely what raised expectations that this performance, held at Tochoji in the heart of the city—a space that represents both the height of artisanal beauty and contemporary art—would make for a truly special experience. 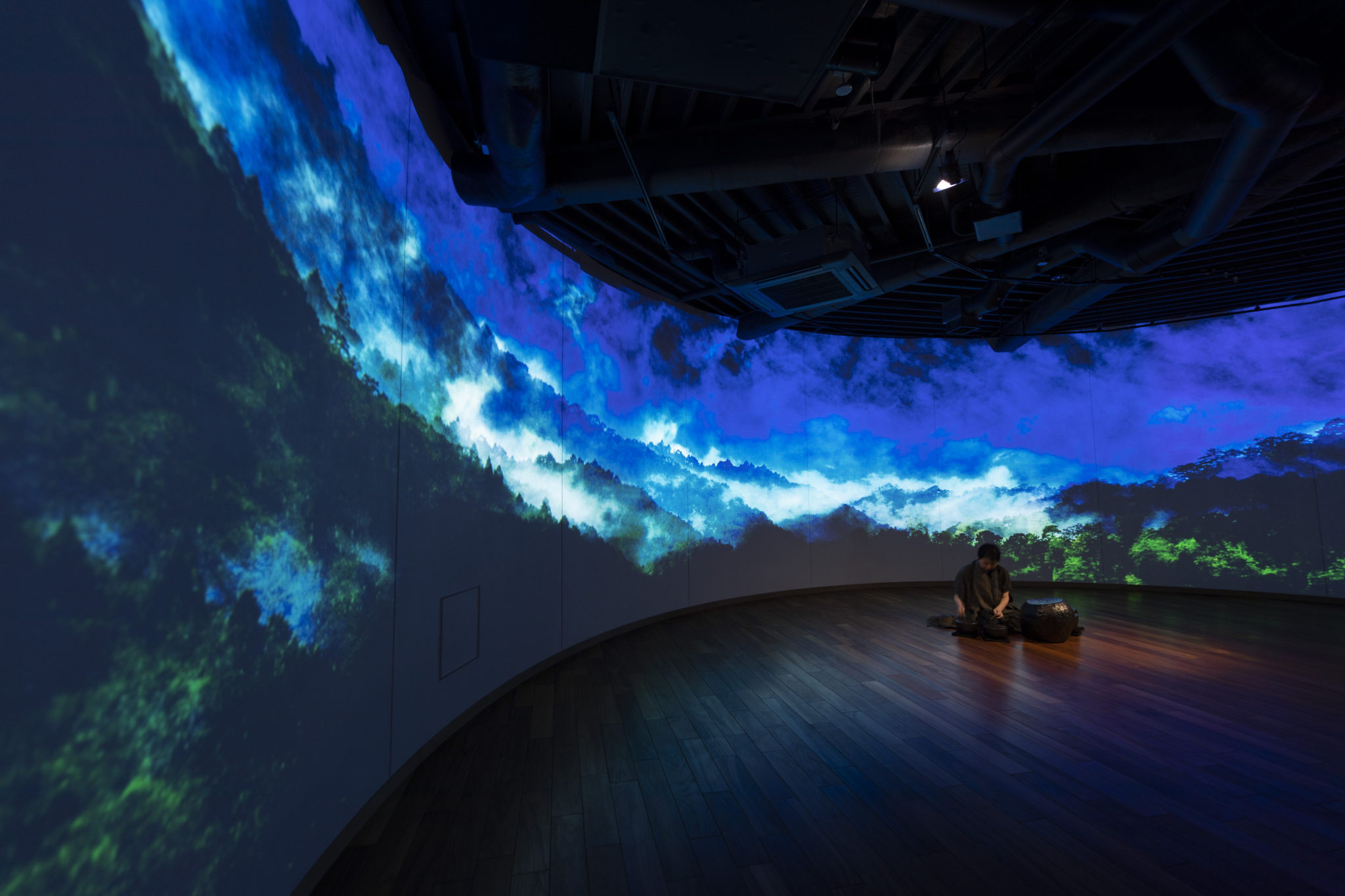 The two performances given differed from each other in format. “Touching Kiwa” was held in the auditorium of Tochoji’s Bunyukaku pavilion, the first temple building in the world to be certified as a passive house. Mukai’s panoramic imagery was projected onto a curved wall, in front of which Nagata, playing a Hamon, was seated. Themed on “spontaneous nature” and “constructed nature” and filmed both in Japan and abroad, the projected video featured grand creations of nature such as forests, plains, and oceans in conflict with pebbles in vividly popping colors that permeate the retina—a journey of the mind, alternating between the concrete and the abstract, the real world and imaginary sceneries. The body, enveloped in the soft embrace of the Hamon’s sound, becomes weightless and all but floats away, as if receiving a superb massage. The paradise-like world of the performance, representing the height of pleasure, brought about a feeling of euphoria clouding the consciousness; being at a temple and all, the thought emerged that if you live a good life, perhaps this is what awaits after death. 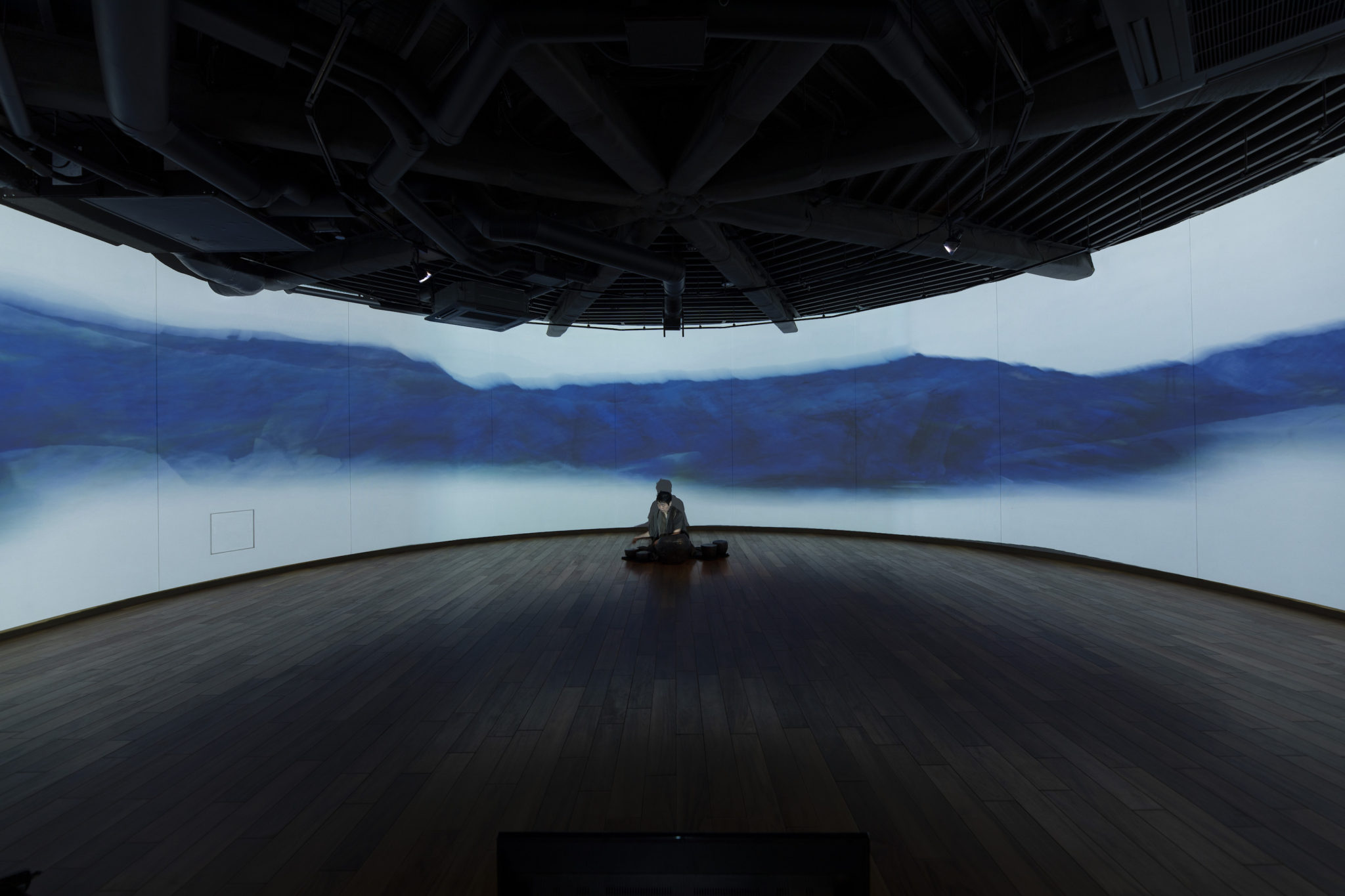 “At the Kiwa,” on the other hand, took place in Tochoji’s Water Garden. The temple’s main hall became the canvas for “public projection,” while the sound of the Hamon floated into space —an attempt to become one with the urban environment. The audience, seated in a circle around a hallway, squinted in the faintly illuminated space, additional light provided only by the windows of the skyscrapers in the background and the hazy glow of the moon visible between the clouds, and listened closely for signs that the performance was about to begin. That’s because the stage in front of the main hall, on the other side of a pool, was simply rather far away.

Music, at last, came gently rolling across the water, soon filling the hallway while mixing with natural sounds such as the whispering of trees, the buzzing of insects, and the flapping of bat wings. The projection, too, flowed beyond the edges of the main hall’s façade, extending onto the water’s surface. The constellations of the night sky, prehistoric artworks carved into the rock just above water level in a Norwegian fjord, a pond with aquatic plants evoking the Buddhist paradise —the motifs of each sequence linked up with the musicality of the Hamon and the spatiality of the temple, making a statement about the history and present of us humans living on this planet. Toward the end, as a representation of the Shinjuku business district drew near, intense, fiery light engulfed the stage, marking the climax of this one-night-only journey. 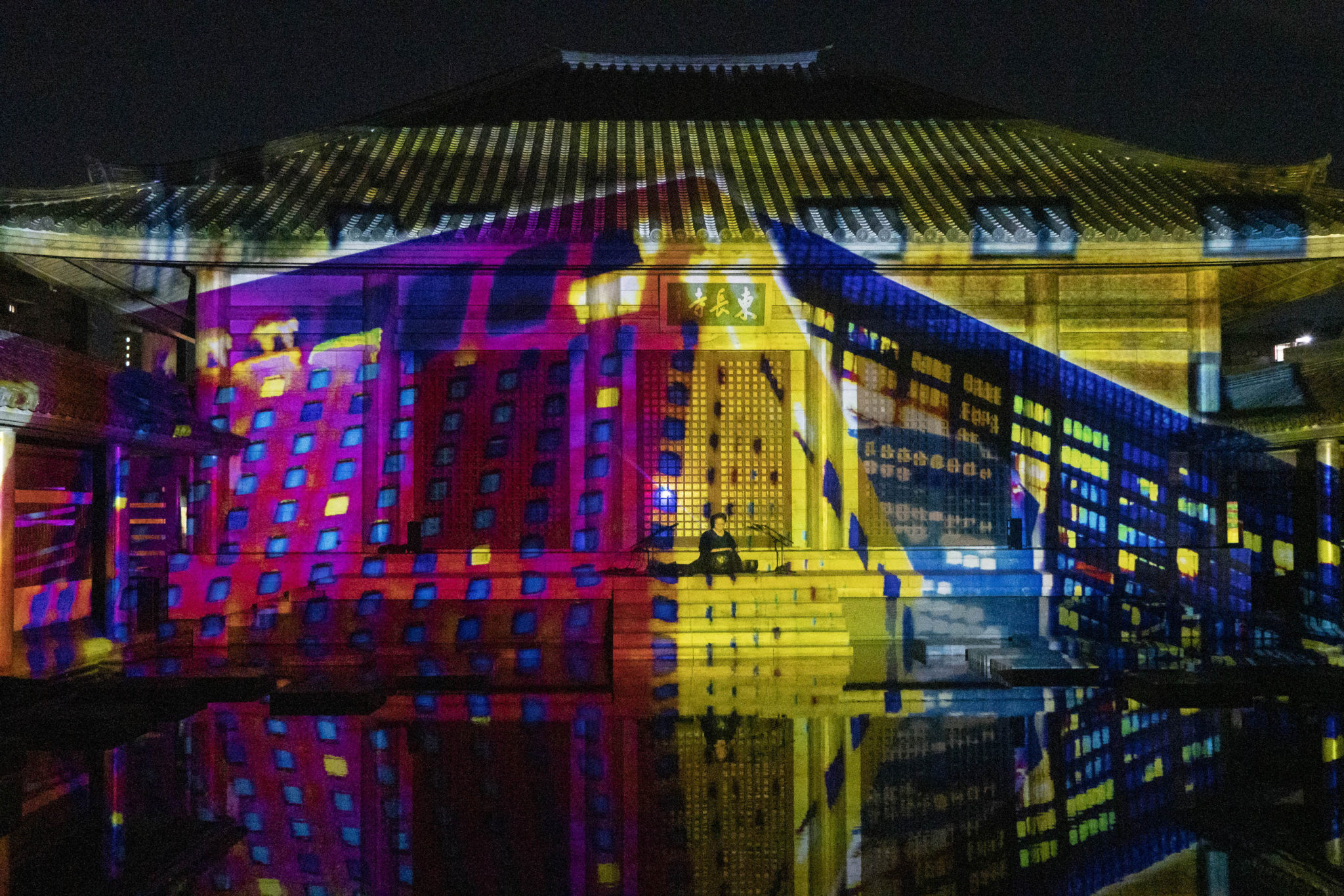 The performance’s combination of a unique Hamon concert and a site-specific visual world made for a highly pure session in itself, but tied in with the solemn atmosphere fostered by the Tochoji space, akin to an air pocket in the metropolis, it brought about a profound ambiance that could only have come about in this place and time.

For that very reason, it was somewhat unfortunate that “At the Kiwa” included separately produced electronic music in the background, as if to underline a conventional sense of spectacle. The layout and planning of the lighting, which at times led the visual elements to obscure the performer from view, also left room for improvement. That’s because the presence of the Hamon, in itself a work of sculpture, and the movements of the performer are also important elements of the live performance. The whole could have turned out even more polished had a directorial perspective, one that determines what constitutes the best performance with regard to the music, visuals, and space and seeks to strike a balance between these elements, been included.

The Kiwa Project succeeded in creating landscapes that with their uncorrupted beauty are capable of touching and soothing all those who lay eyes on them, regardless of age, gender, preexisting knowledge, or sensitivity. I hope this experience, which purifies the spirit like a visit to a temple or shrine, will reach those in need of it. 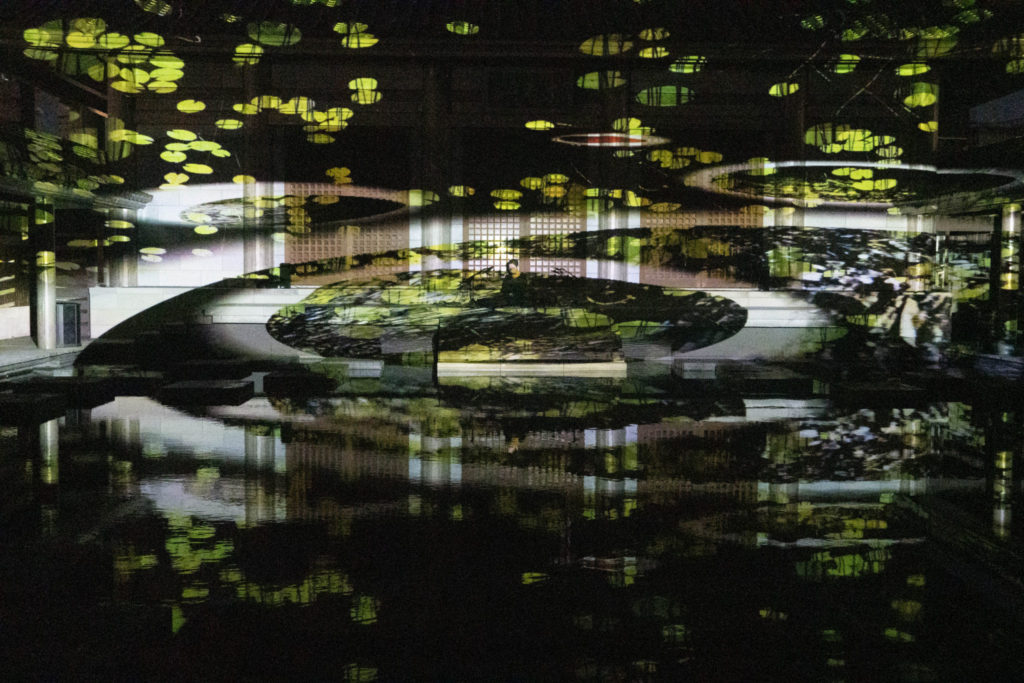