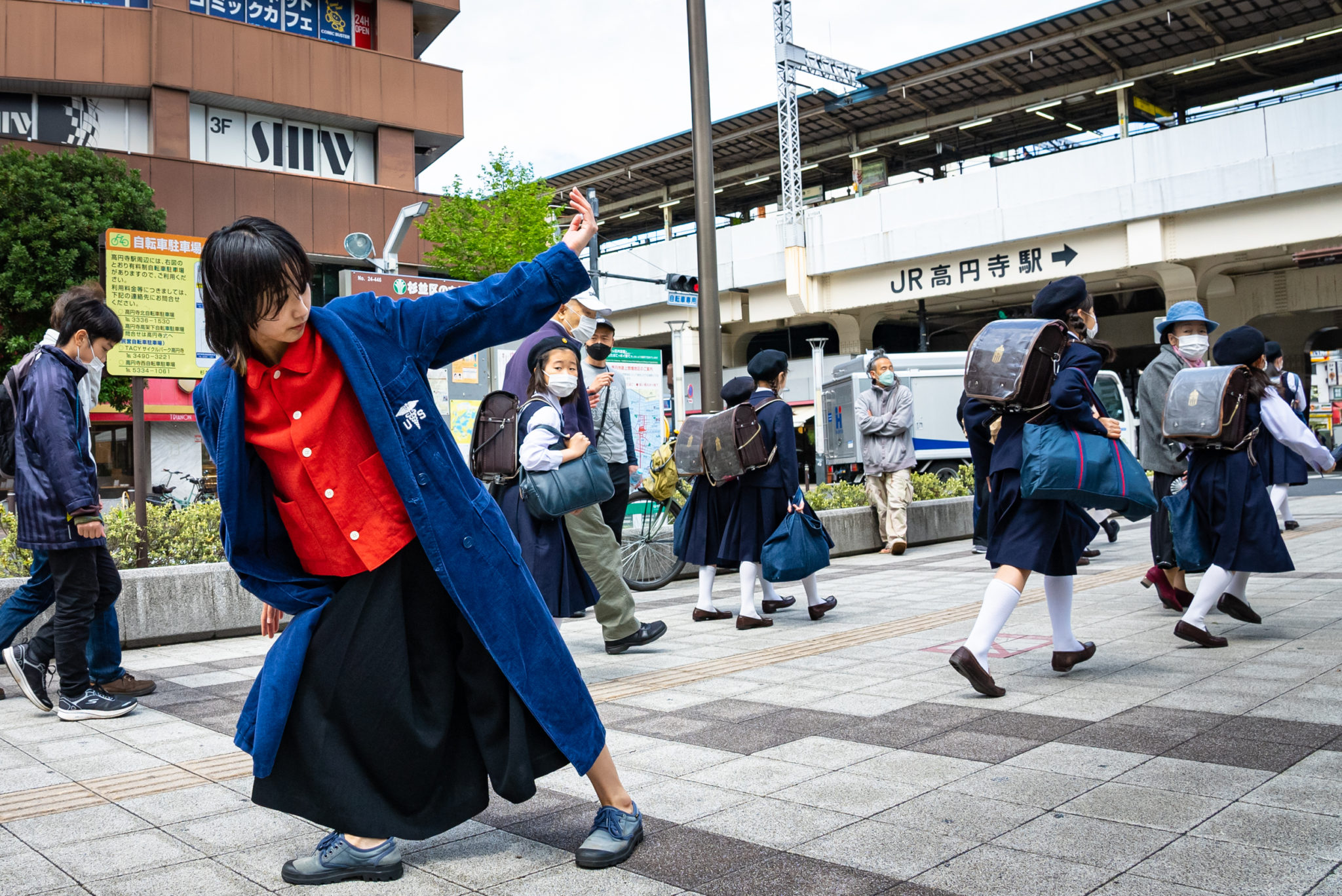 On yet another crowded weekend in Koenji, the plaza in front of the station’s south exit served as the meeting point for the Land Fes Diversity Koenji event. Started in 2011 as an event for appreciating dance and music sessions while walking around the neighborhood, Land Fes has since taken place in a variety of locations, including Sengawa, Fukagawa, and Shibaura. This edition was the second to be held in Koenji, which last served as the venue eight years ago. Only the meeting place and performers are announced in advance. This time, a total of eight groups performed across two days.
On Day 1, things kicked off with the appearance of Kaho Kogure, who was wearing a red shirt and blue coat. Dashing around the square and standing by the water’s edge, she gradually drew people’s attention. On the way, guided by Kogure, the audience was divided into two groups.
My group first arrived at Koenji Hikawa Shrine, where Hirofumi Nakamura’s bouzouki and accordion tunes accompanied Yu Machitera’s breakdance-based, free-flowing moves, the dancer’s bandana fluttering in the air as he swung his body. Kogure joined them, and the session’s focus shifted to a skillful use of foreground and background. Seeing the dancers exchange smiles as they passed each other was memorable.
Our next stop was Chosenji Temple, watched over by a pair of glaring Nio statues. A suit-wearing Takao Kawaguchi, slumped on the ground in the temple’s beautiful green garden, slowly rolled and shuffled across the lawn, rising with a stumbling gait. Kawaguchi restrained his dynamic impulses the best he could, while Kei Matsumaru on the saxophone looked intently at him, precisely capturing an exquisite moment. The sun’s rays and shadows added theatrical color to the confrontation between the two. 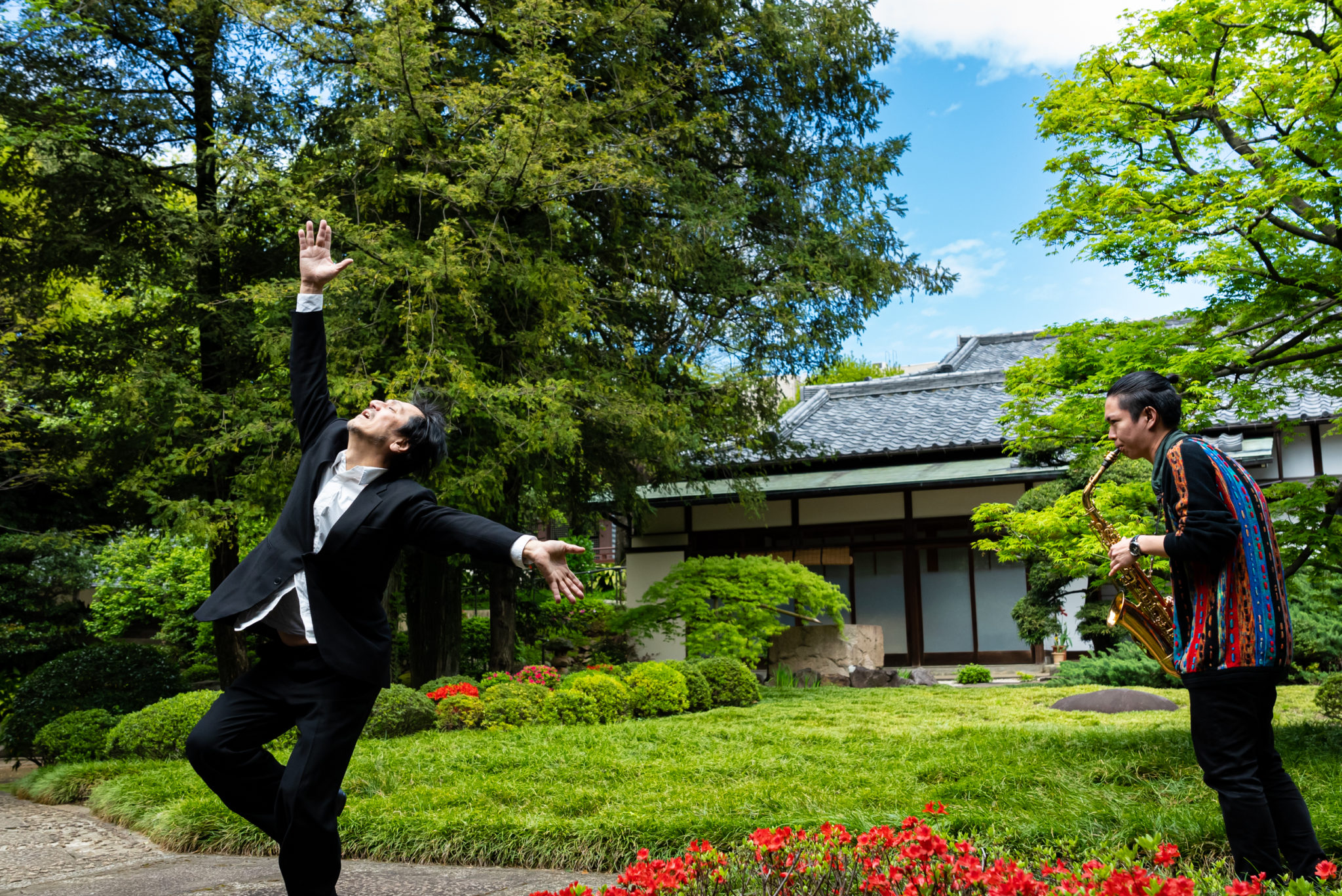 Mai Nagumo and Irma Osno were waiting for us at the Cocktail bookstore, crammed with tomes and old tools. Osno sang in a high-pitched tone while switching between the traditional Peruvian instruments chinlili and tinya. Slipping through the throngs of people in the space filled with Andean melodies, Nagumo stepped onto a low platform, weaving her movements as if she were telling a story. The hearth, a fukusuke doll…Her gaze and fingertips led the audience to take note of various things in the space.
Our final destination that day was a warehouse close to Kannana-dori. The two groups, having taken different routes, met again here. The show started with the closing of the shutters, revealing dancers Takahiro Tomatsu, Saki☆Nami, and Takeshi Nishioka, painting colors on paper as well as on their bodies, and musicians led by Suil Kim playing the piri and janggu. Laughing at calls to join the dancers’ circle, or feeling pressured by the seriousness of their gazes, a sense of complicity began to develop on the part of the audience. 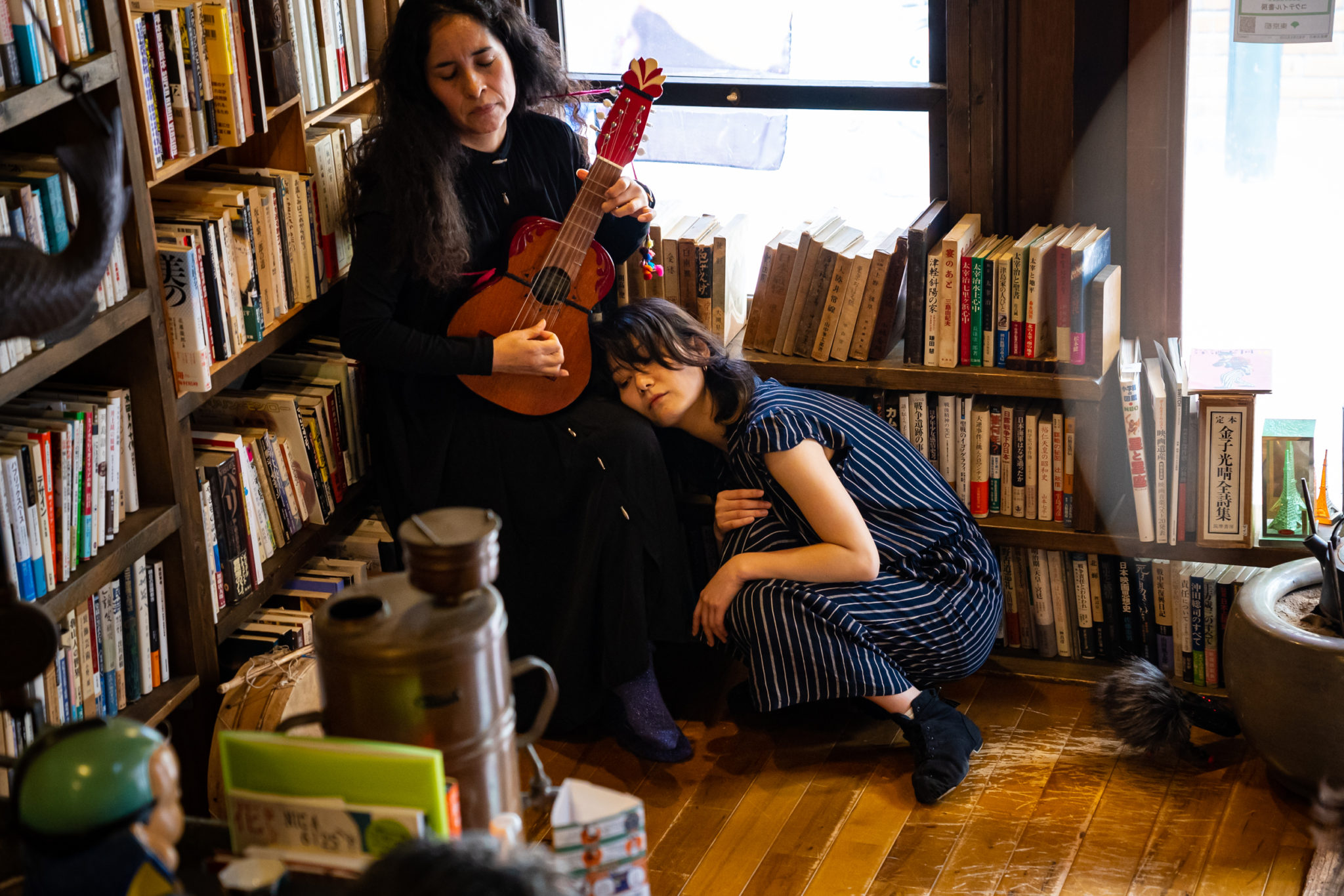 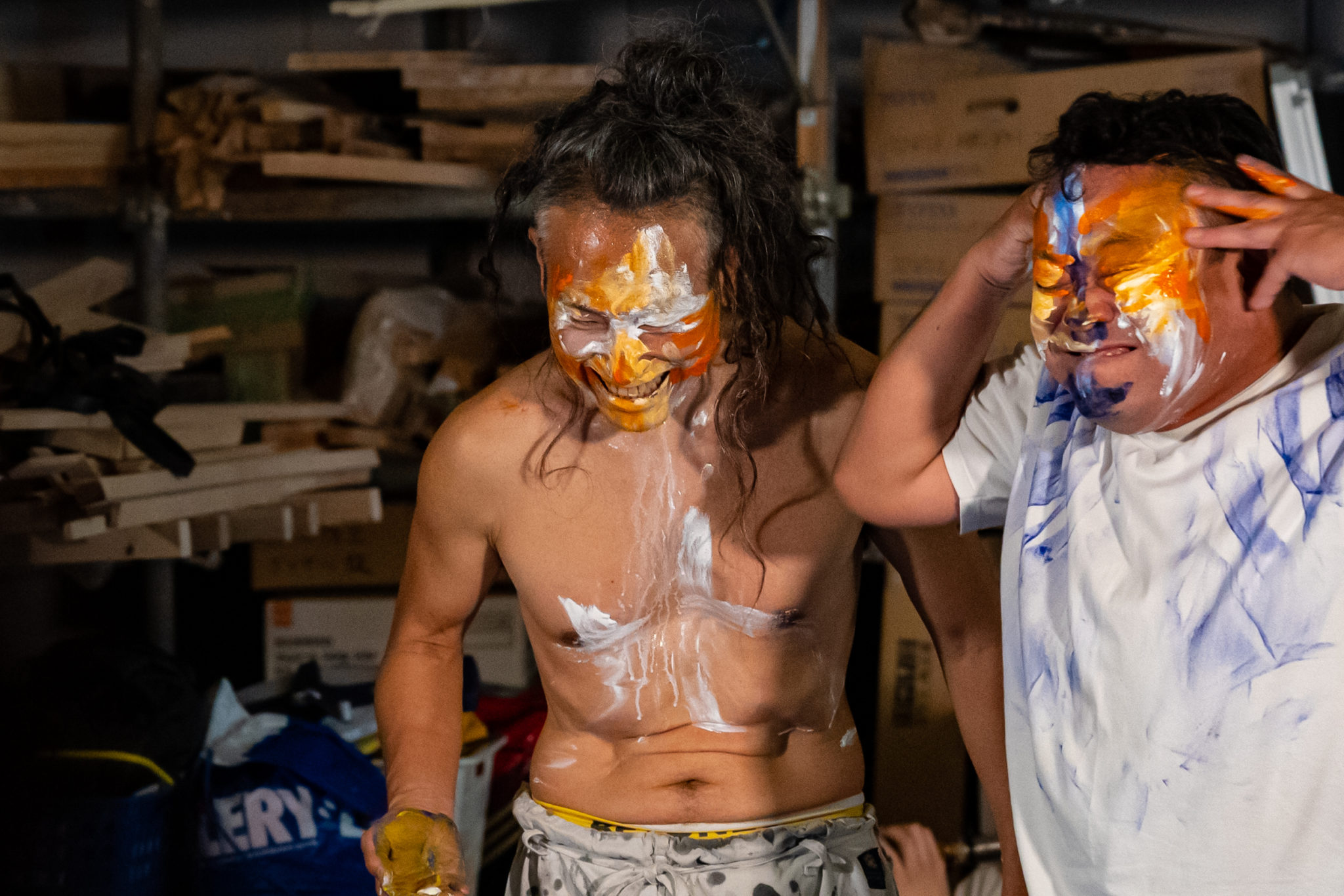 Leading the way on Day 2 were the leotard-and-umbrella-clad Aoituki duo of Aoi Yamada and Tuki Takamura, who danced around a patrolling police officer before nonchalantly crossing the street side by side. Upon arrival at Hikawa Shrine, they folded their umbrellas and took the audience to visit Japan’s only “weather shrine” on the grounds, demonstrating their ability to instantly transform any location into a stage. And in a collaboration with Mayunkiki, clad in Ainu patterns, Aoituki created a story world to accompany her singing. 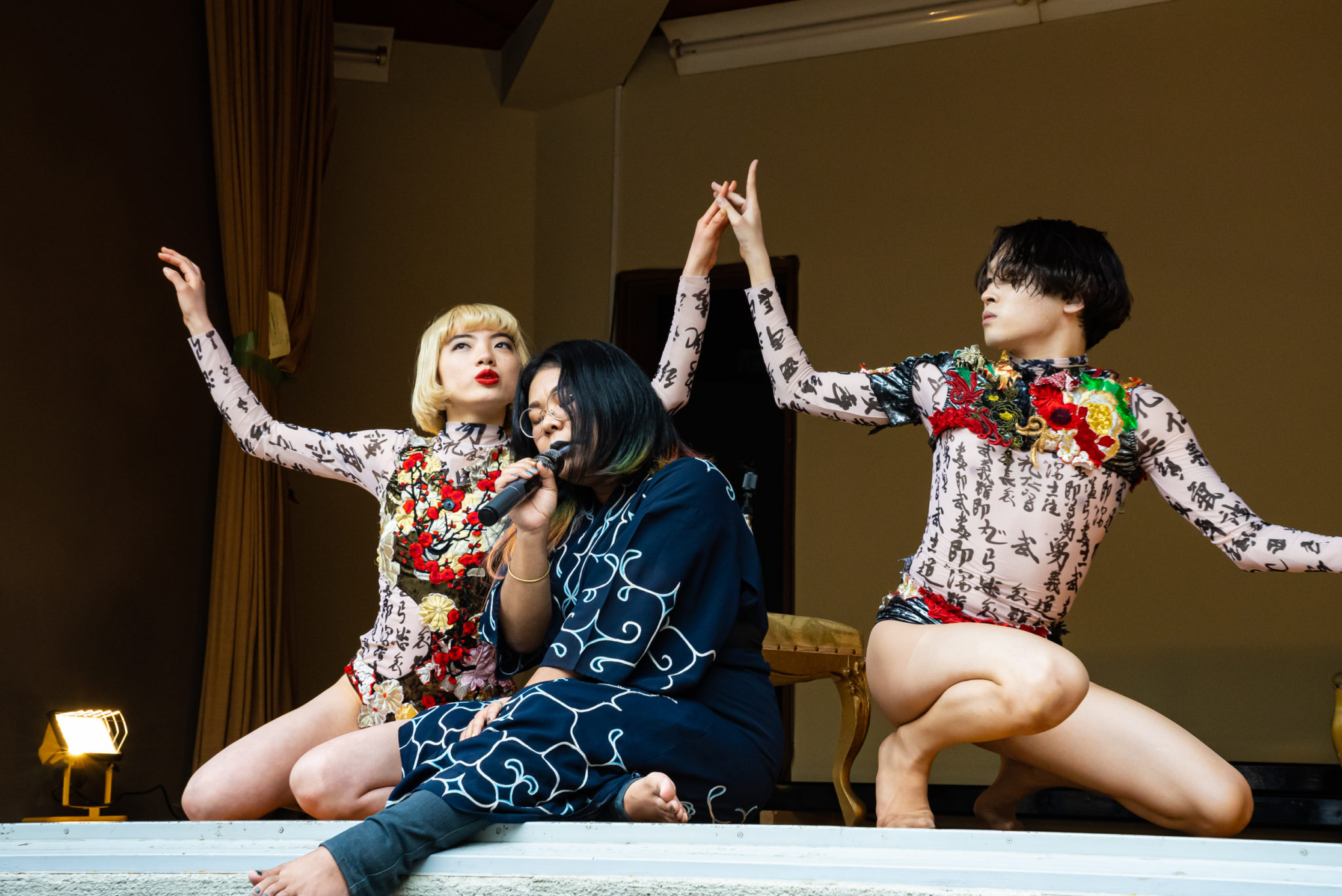 An African atmosphere could be savored on the rooftop of a building near the middle of the shopping street, with Takeo Niikura and Wagane Ndiaye Rose powerfully beating on sabars, the audience clapping their hands rhythmically while GenGen leapt forward like Tarzan and danced in the midst of the crowd. Niikura also stood up from time to time to join the dancing, with Yu Machitera, who was in the audience, also responding to the invitation and busting out a few moves himself. The rhythm reached its climax as bright shades of yellow, green, and blue intermingled.
Down an alley on the grounds of Chosenji Temple, away from the hustle and bustle of the city, we encountered the seven members of Sokerissa standing quietly. As the low tone of Wataru Ohkuma’s clarinet echoed from behind the gate, one by one they stepped out, stamping the ground and looking up at the sky as they danced. After a round of dance, they formed a circle around Ohkuma and left for the back of the garden to the melody of “Goin’ Home.”
The program ended at the same warehouse as the previous day. Ai Sato and Koichi Ohmae performed a duet in the dimly lit space, with indirect lighting and Tokutaro Hosoi’s strumming on the guitar enhancing the mood. Sato, who glided freely in the confined space, and Ohmae, who seemed to manipulate the length and direction of his legs at will, faced each other, cuddled up to each other, and touched each other only with their fingertips before separating again, conjuring up a delicate sense of distance. 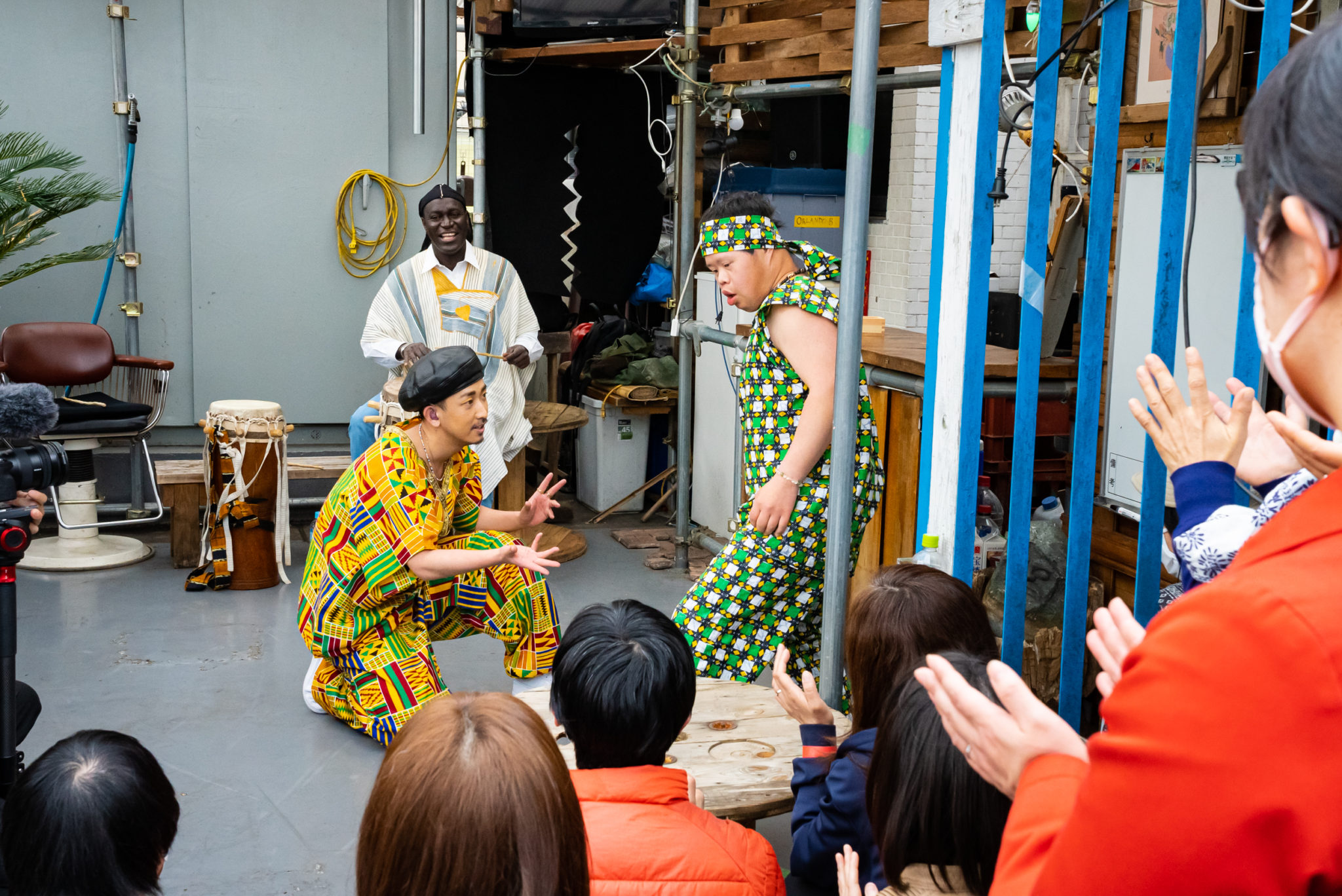 The term “diversity” has been widely used since around the time of the bidding process for the Tokyo Olympics. While it is gratifying to see the actual attention being paid to diversity and how this is being reflected in terms of social change, I frequently feel a sense of discomfort with its representation. Our identities are not monolithic. Identity is an aggregate of multiple elements, which cannot all be reduced to specific attributes such as nationality, disability, or sexual orientation—all constituent parts within which there are subtle shades and fluctuations. Nevertheless, there are many examples, even in the field of performing arts, of an excessive focus on easily recognizable differences and the classification of people into defined boxes.
In this respect, the eight sessions at Land Fes, which showcased the multifaceted appeal of each performer, provided an opportunity for the viewer to question their own biases. The most diverse things are truly the individual’s body, which has been built up through a life lived while absorbing plurality, and the richness of expression that emerges from it. What Land Fes embodies is neither assimilation nor exclusion, but a vision of dissimilation and integration, in which people with disparate bodies overlap while remaining apart.
“People can make landscapes , *” as organizer Dai Matsuoka puts it, is a reaffirmation of the importance of events such as Land Fes appearing in the city to shake up the obvious. The scenery of a city is sure to influence people’s bodies and thoughts. At a time when diversity has become a buzzword, efforts with a steady focus on individual expression and encounters seem as significant as ever.

* Quote from a talk held after the end of performances on Day 2.