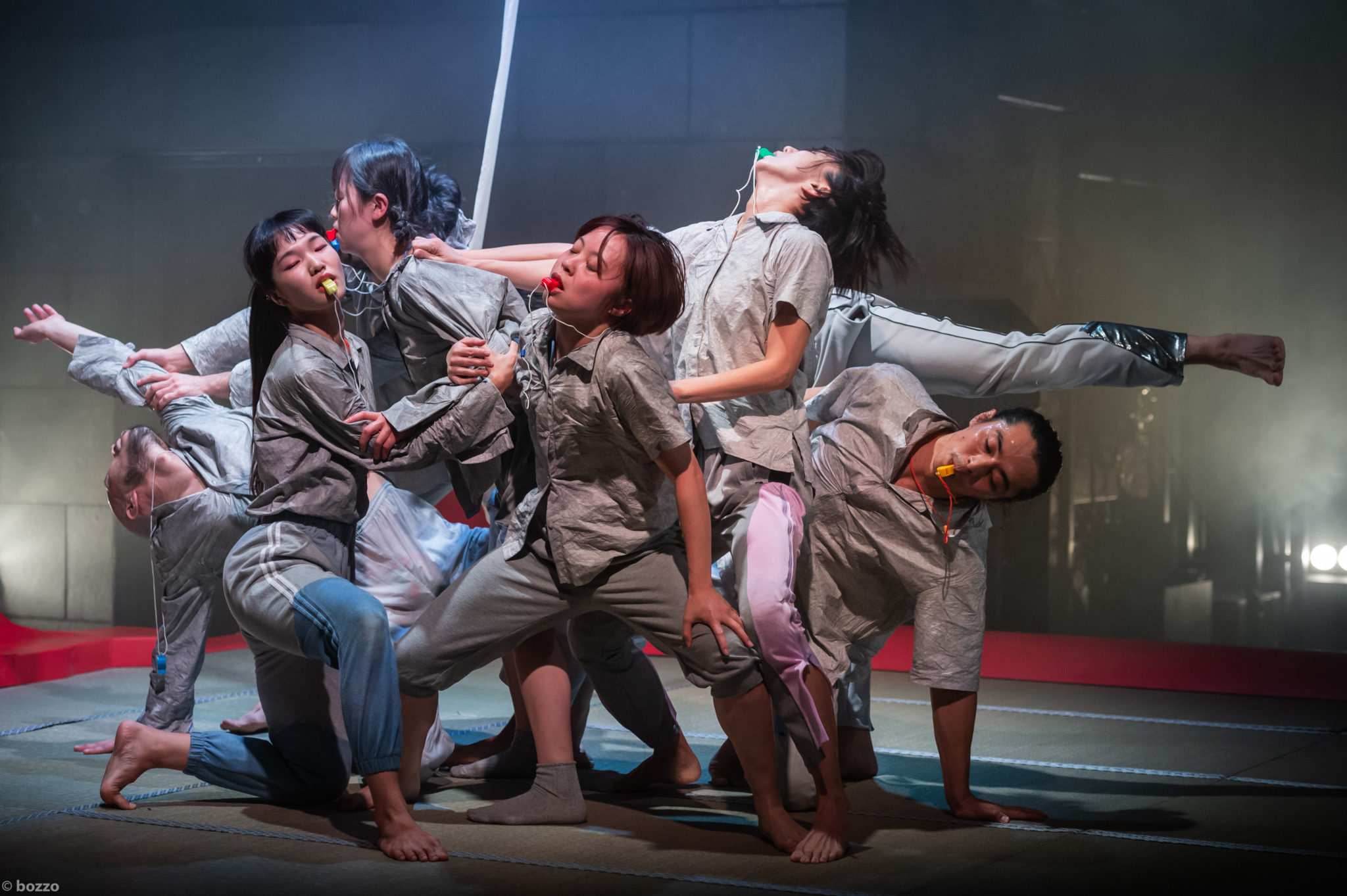 I once thought of Masako Yasumoto as, above all, a beautiful dancer. She looked pretty, and her movements were limber but sharp ? there was a boundless beauty about everything she did. But one day, my understanding of that beauty was suddenly turned on its head. I think it was the 2012 piece “Zekko Waruko, PON” that did it for me. It was like she exuded poison all while retaining her beauty, and pushed her adoring audience off a cliff and straight to hell. Ever since, she has continued to serve up poison to onlookers drawn to her beauty. By 2018’s “Kora Kora,” I realized that I had become severely addicted to her charms.

Her latest work, “Full Automatic Worldly Desires zuizuiz” afforded me with a complex and yet somehow unconvincing experience, in which amusement, exhilaration, conflict and pleasure, as well as a certain creepiness, all rushed over me simultaneously. It was a series of scenes that entangled my senses around a feeling of not being convinced.
I have been involved with works of performing art on several occasions over the past few years, and have had the opportunity to work together with dancers from both Japan and other countries. From my admittedly rough perspective, I have been able to notice a few differences in orientation between Western and Japanese dancers. While the former tend to focus on honing their physical abilities so that they are able to perform any program, the latter often create their own works rather than only performing those of others. Perhaps for that reason, Japanese dancers tend to have very diverse views on expression. This tendency is exciting on one hand, but it often casts a shadow over the dancers’ performances when they appear in other people’s works. As each dancer’s individuality shines through, their compatibility with the piece they are performing can be clearly distinguished. I thought this was something that couldn’t be helped.
In this work, however, each dancer lets their individuality loose ? as if they were all performing their own piece. Glittering intensely, each soul exudes a remarkable power. Perhaps it was this simultaneous assault of incompatible sensibilities that overwhelmed me and left me unable to process what I had seen. 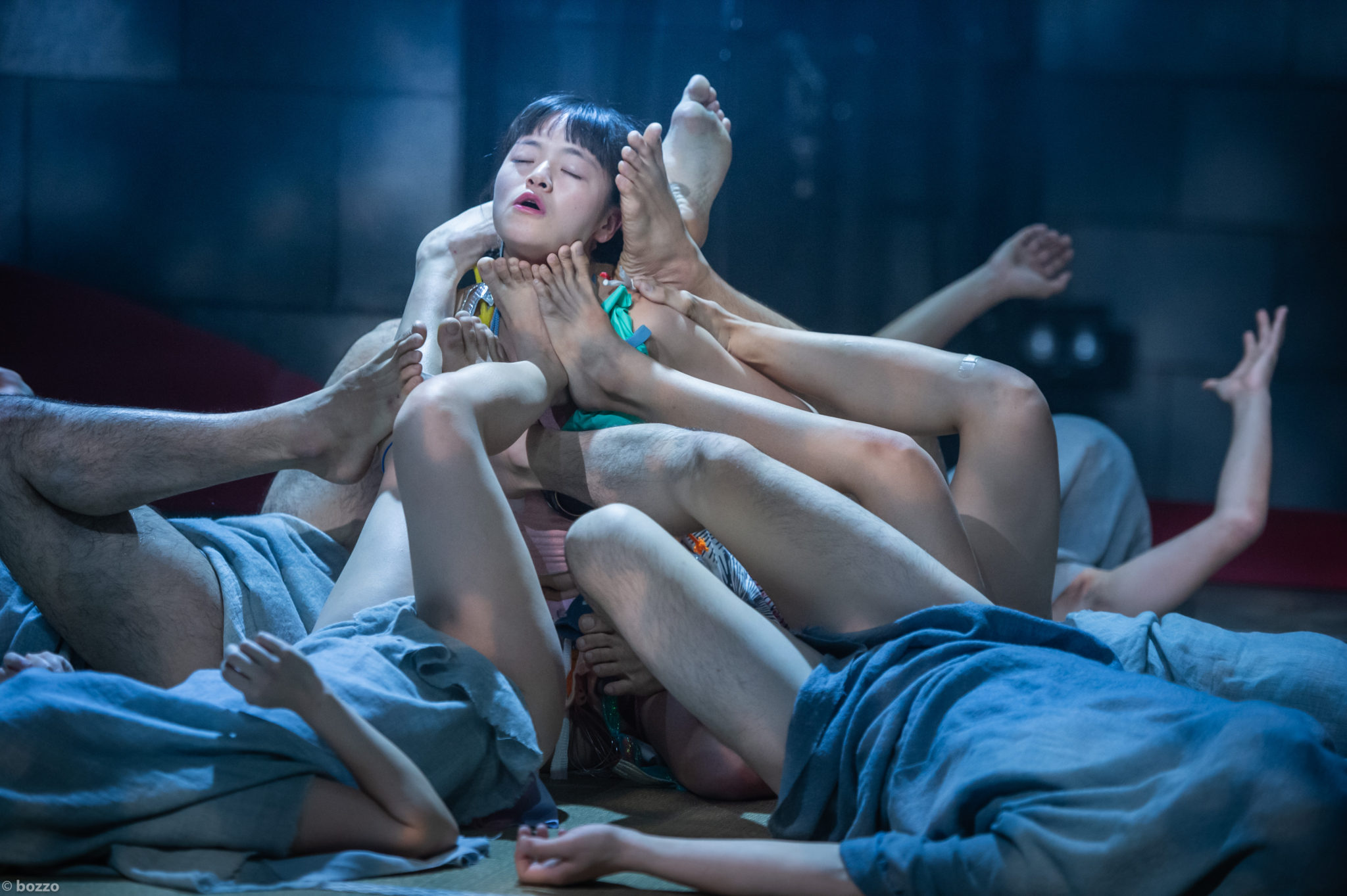 Another noteworthy aspect is the direct expression of sexuality. The amusing and erotic aspects of the human body and its animal-like, visceral expressions are painted with a brush that can well be called violent. The movements of Yasumoto’s fingers and toes are powerful but subtle, and at times appear to separate themselves from her body. One body is split into several pieces, and just as these pieces seem to come back together, multiple dancers suddenly form a single, large, wriggling soul. Just when it seems like the audience’s focus is driven to a small detail, that focus is blown up to encompass the entire space ? a switching of perspectives that takes place at a speed seemingly impossible in reality. Watching the stage, the onlooker’s body and senses are constantly being moved. This is what sets Yasumoto’s works apart: you’re seated in a chair, but notice yourself engaging muscles that aren’t necessary for sitting. You wouldn’t need to move your head to get a view of the entire stage, but the alternating perspectives encourage even such movement. And just as you get used to this, something on stage makes your body go rigid, stopping everything but the eyes ? as if you were bound to the chair you’re sitting in. 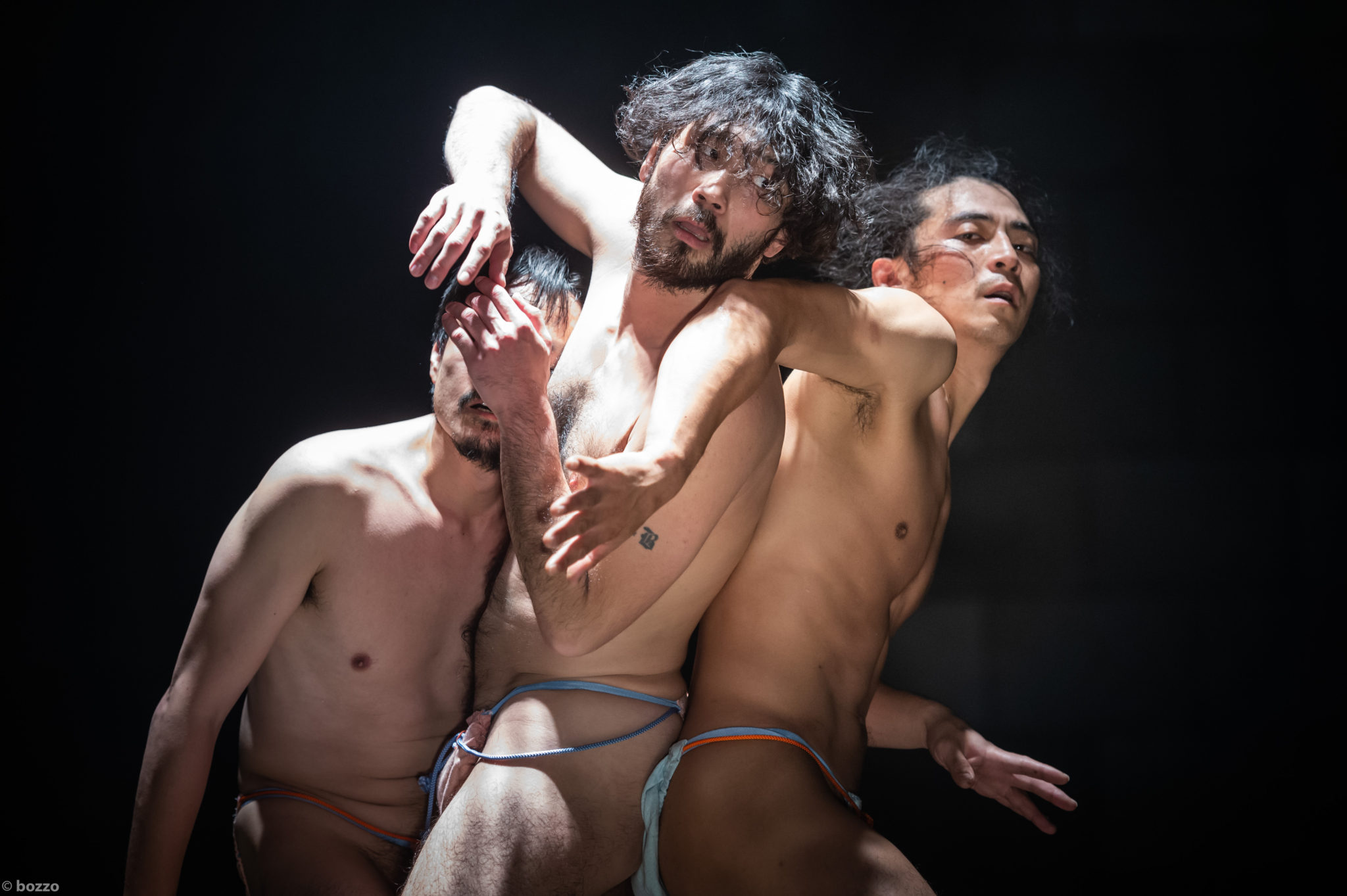 I have, to the best of my ability, tried to grasp sexuality in a direct manner. Sexuality, however, always brings about a timid sense of surprise in me, and I’ve come to accept this as my relationship with the subject ? a relationship I’ve tried to express in detail in my own work. That said, when I came in contact with the understanding of sexuality that runs through Yasumoto’s work, my own awkwardness was laid bare. The freedom with which she handles sexuality, connects it to everyday life, and expresses it at will ? these aspects gave me a sense of hope, a feeling that maybe I could once approach sexuality differently myself. 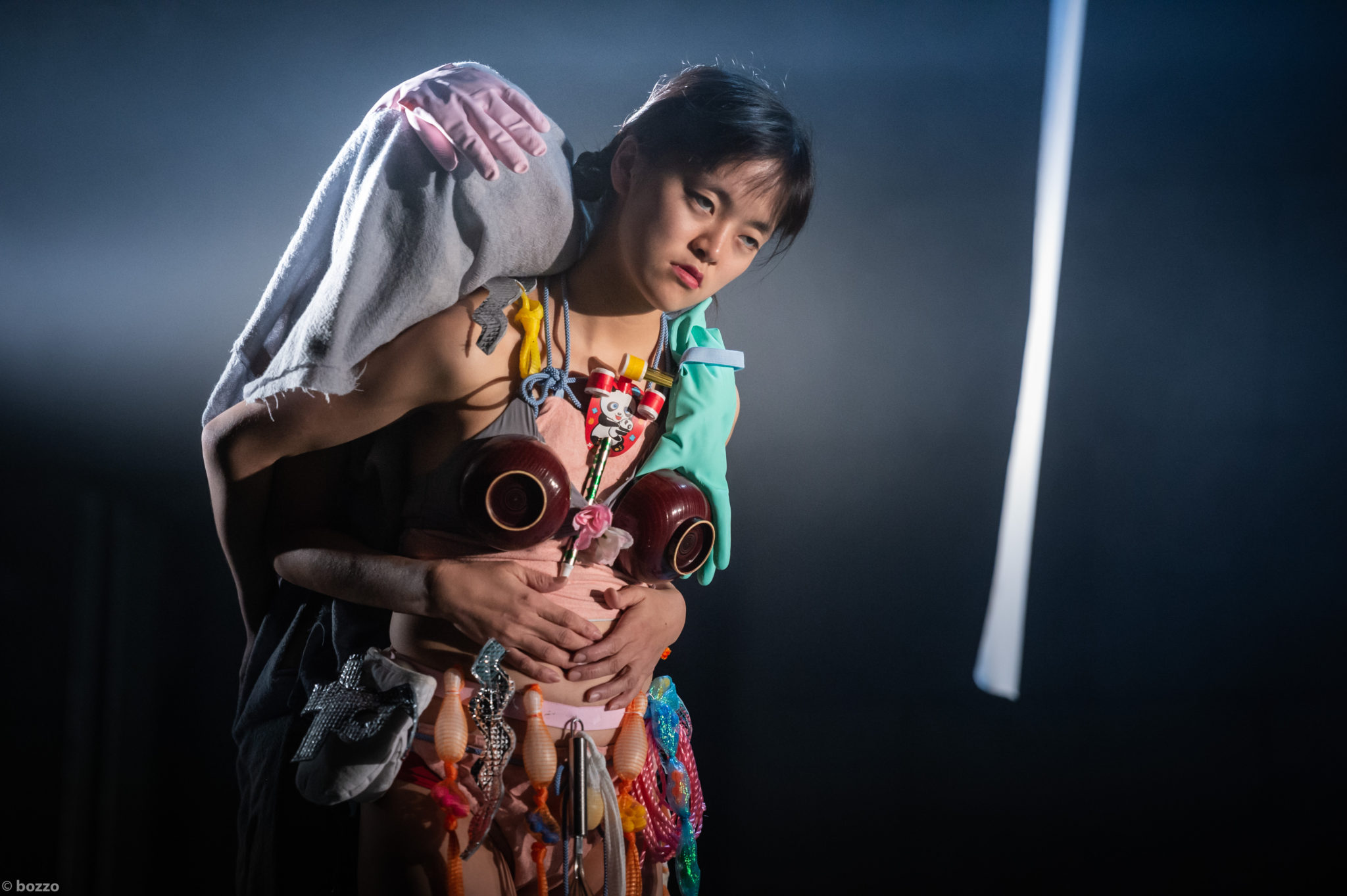 The young generation right now is speaking up about once sensitive and suppressed issues such as discrimination against women and sexual violence, leading a global movement to rectify society. While I agree with their goals, I used to worry about the increasing pressure on free expression that is caused by the difficulty of determining where lines should be drawn when regulating these matters. I even came to fear that my own freedom of expression could be affected.
I can’t sympathize with people overreacting to certain ways of portraying women, or with those who seek to deny all expressions of sexuality on the charge of vulgarity. I feel like such people seemed to want to keep up appearances by rejecting sexuality itself ? a dangerous act that means cutting away an important part of what makes us human. 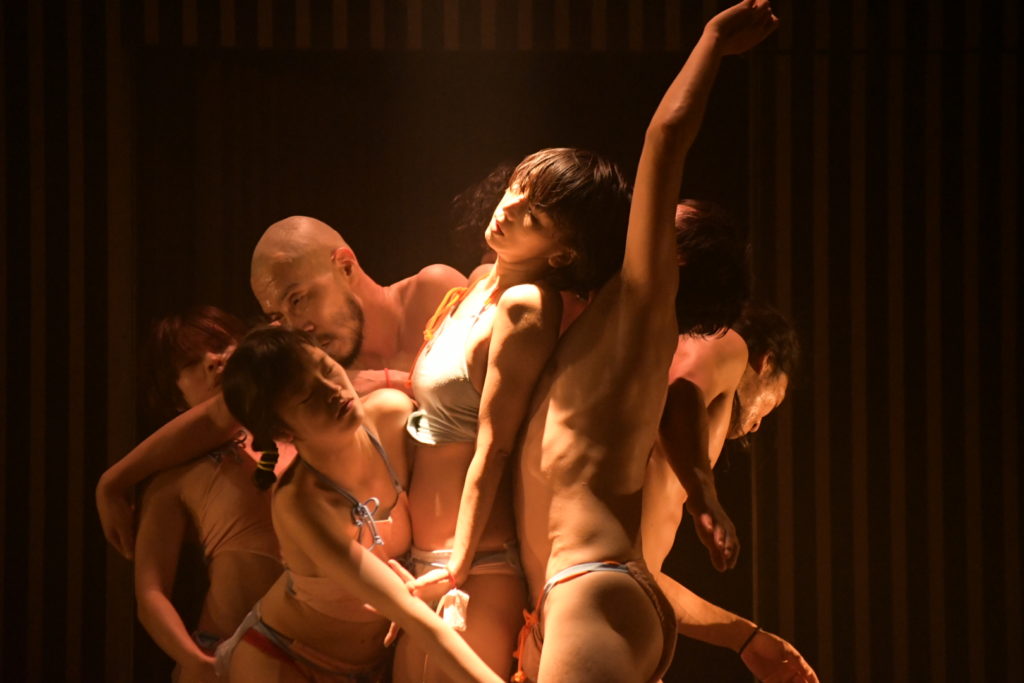 After watching “Full Automatic Worldly Desires zuizuiz” my worries as described above seemed insignificant. Even if some things get cut away by accident, new saplings will sprout from where the cuts were made. Yasumoto’s work tempts and sets fire to the ghosts of old branches, encourages new and sudden growth, and cultivates trees greater and more beautiful than those of the past.
Yasumoto’s artistic activities, which have continued as usual despite the Covid-19 crisis, stimulate my shrunken muscles, make me realize how there are still new experiences to be had in this world, and provide me with pleasure that words cannot describe. She “poisons” everyone around her; your body will feel different before and after watching one of her works.

Contemporary artist
Tabaimo debuted in 1999 with the animation-incorporating installation “Japanese Kitchen,” her graduation project at Kyoto University of Art and Design, which won the Kirin Contemporary Art Grand Prize. She has displayed her work at several international art exhibitions, from the inaugural Yokohama Triennale in 2001 to the 2011 Venice Biennale, where she was the representative artist at the Japan Pavilion. She has worked on stage-related collaborations in recent years, and in 2016 held an extensive solo exhibition themed on the concept of “Utsushi” at the Seattle Art Museum. Tabaimo provided the illustrations for Shuichi Yoshida’s novel “Kokuho” (“National Treasure”), which was serialized in the morning edition of the Asahi Shimbun newspaper from January 2017 to May 2018, and displayed her first oil paintings at a 2019 solo exhibition held at the Pola Museum Annex in Ginza. “Sabi kara deta mi” (“Fruits borne out of rust”), a work of performance and video art conceived and directed by Tabaimo, toured the United States in February and March 2020. She is currently working on another piece of performance art together with a circus performer based in France.