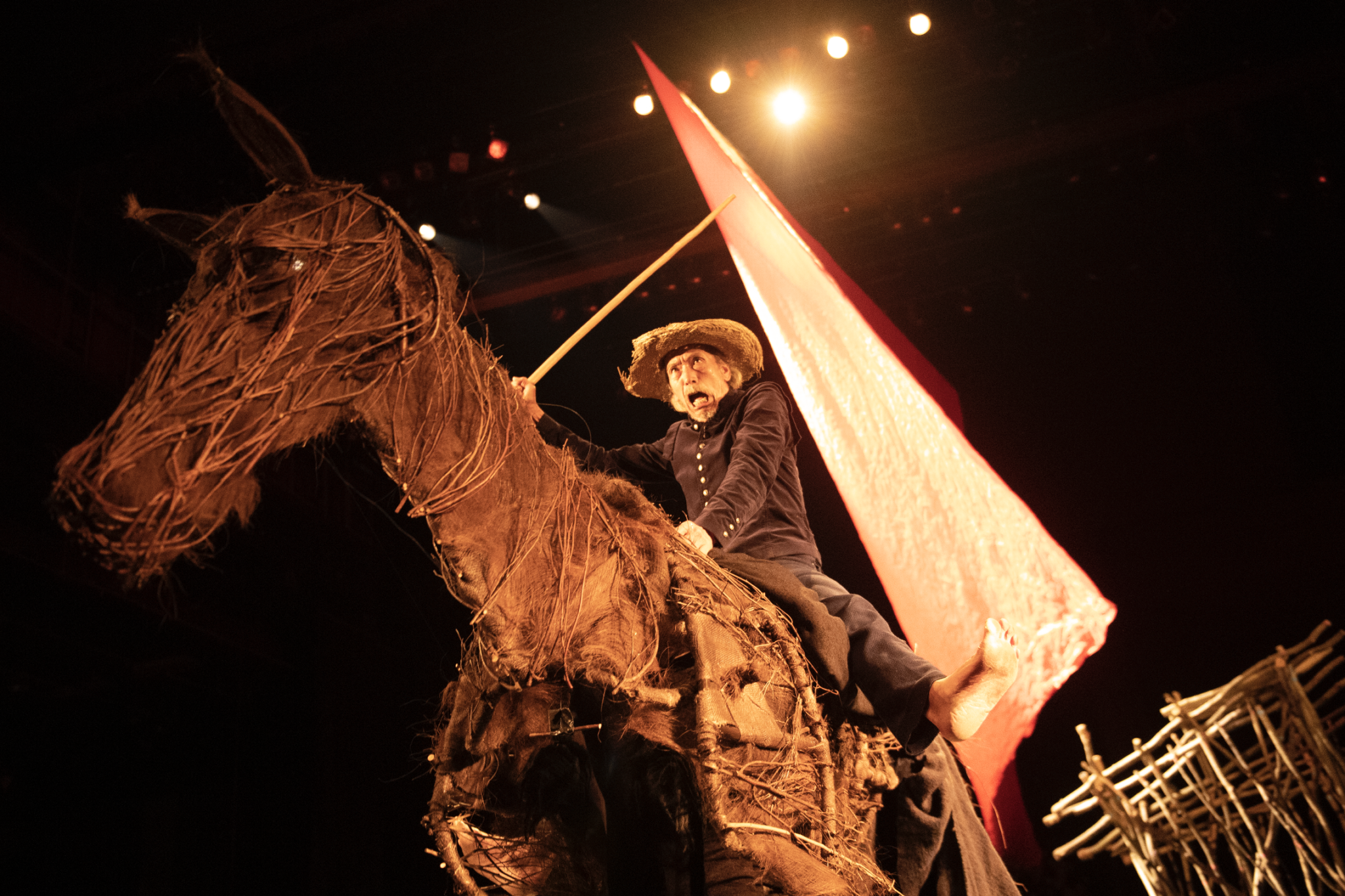 April 2020. “Miren no yurei to kaibutsu” (“Regret of Ghosts and Monsters”), a play at the Kanagawa Arts Theatre I was supposed to appear in, has just been canceled. Does the cancelation of a performance mean the cancelation of expression? Unable to sit still, I set out on a long journey in search of dance. I traveled light, my bag packed with only a single book: Min Tanaka’s “Boku wa zutto hadaka datta” (“I Was Always Naked,” published by Kosakusha).

“I think there’s more to dance than moving your body. If someone lying on their bed couldn’t dance a dance in their head, that would be tragic.”

Min Tanaka’s approach to creativity, in which he seeks to discover dance beyond the boundaries of the human and the self – in the breathing and slight bodily movements of a patient lying in a hospital bed, or in the activity of dirt-covered microorganisms underneath fallen leaves – has served as a great source of inspiration for me.

If I can’t dance on stage, I’ll look for dance in nature.
One time, I was drifting about on the waves of Wakasa Bay. Another time, I became one of those black bags filled with soil and piled up alongside the highway. My audience consisted of seagulls and the exhaust fumes that noisily floated away from the road. As I traveled from one place to the other on my lonely “journey of dance,” I came across people who dance entirely of their own volition, despite the calls for “self-restraint” heard across society. They included tessen-ondo dancers in Kumano along the Saba Kaido road, and the bon odori dancers of Niino in the town of Anan, Nagano.

As I made unexpected acquaintances with charming people and interesting forms of dance in various places, I began to hope that I needn’t return to Tokyo. But one day, a reason that impeded me to return presented itself.
I found out that Min Tanaka would be performing a play titled “Yo! Don Quixote” at the Tokyo Metropolitan Theatre. Why had Tanaka – someone who has sought to bring dance outside the space of the theater through site-specific initiatives such as ba-odori, Locus Focus (“dance in a place”) that have been performed around the world – decided to appear on a theater stage now, in the midst of the coronavirus pandemic?

I thought Tanaka would be sending yet another strong message with this move, and felt like I really had to be there to see the show. I decided to leave the place I was staying at and travel back to Tokyo for one day only. 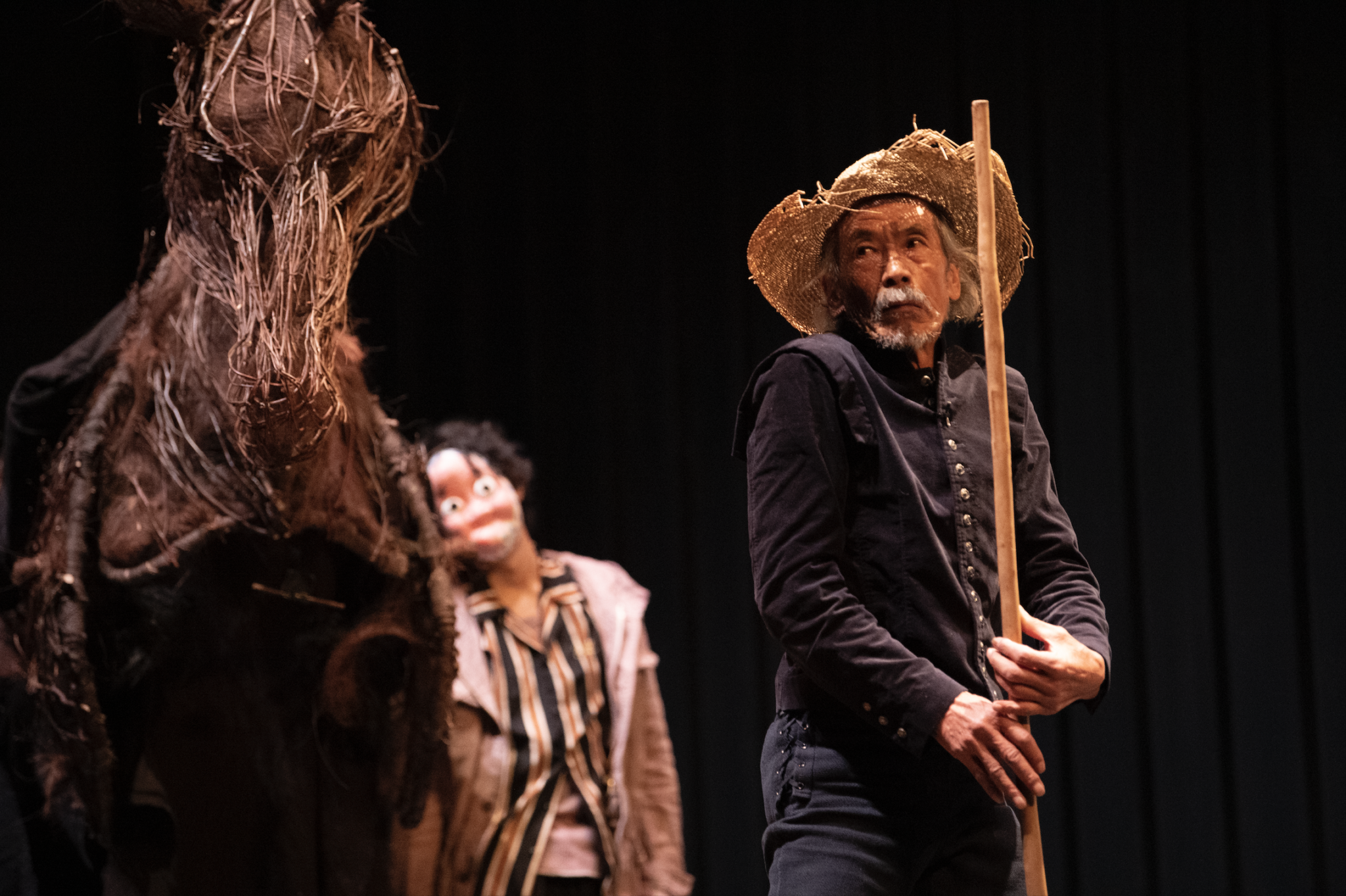 The performance took place on December 4, as 2020 was coming to an end. Wanting to see the show as soon as I could, I headed to the theater on opening day and found the place packed with people – this was when Tokyo was recording an average of roughly 500 new coronavirus cases every day.

The performance started with a man on horseback (Min Tanaka) visiting a village. A wooden casket lies on the dim stage. Mask-wearing children stand silently nearby, their lack of vigor suggesting that there’s something amiss in the village. But the man’s appearance brings change: the children, curious about this unexpected intruder, stand up. They grab a long stick dropped by the man, who has fallen off his horse in his stupor, and start playing. The man, seemingly unaware of the children toying with him, shows no sign of recovery.

The emaciated intruder and the villagers invigorated by his presence strike contrasting figures on the stage. “Where? Where?” – a woman (Rin Ishihara) searching for something appears. She appears full of sorrow, monomaniacally looking for something she is unable to accept has been lost. Her voice gradually wakens the man. 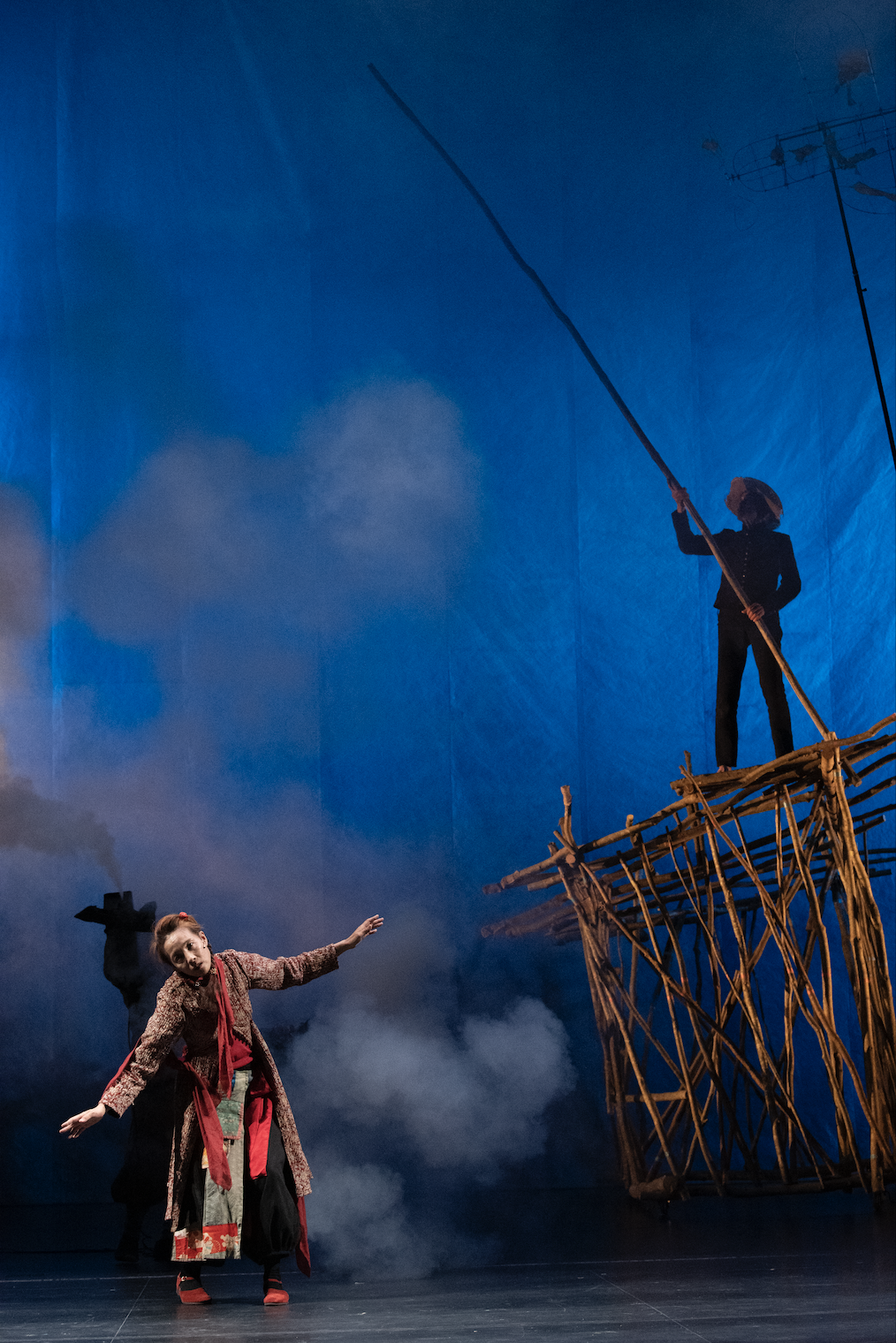 Watching him, I reflected on Don Quixote, also part of the title of the piece. In the original novel by the Spanish writer Miguel de Cervantes, the protagonist Alonso Quixano reads so many stories of chivalry that he loses his mind and decides to dedicate himself to the cause of knighthood, adopting the name Don Quixote de la Mancha. He names his horse Rocinante and sets out on a quest to right the world’s wrongs.

Later hailed as a foundational work of modern literature, “Don Quixote” was published in two parts, the first in 1605 and the second in 1615. In Tokyo some 400 years later, what is it that drives Min Tanaka’s man onto the road in “Yo! Don Quixote”?

This question is answered early in the first half of the play. 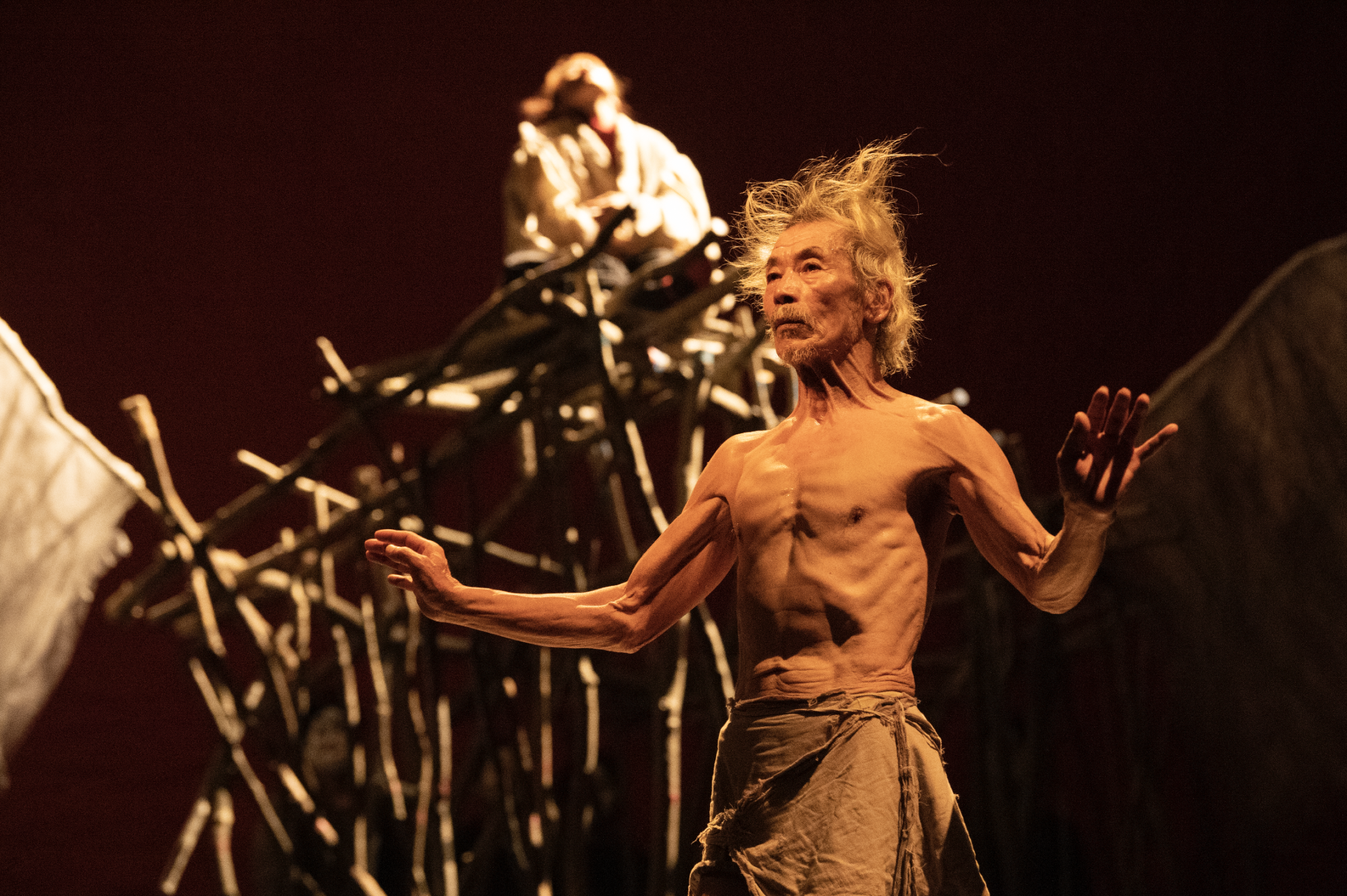 Music evocative of an alarm starts playing in the village after the intruder’s entry. The sounds grow increasingly tangible: gunshots, explosions, bombing, a cranking engine that can’t quite start. The children all run away. The man, lethargic only moments ago, now appears revived and grows vigorous.
Picking up clothes and pulling them on……as the crazed villagers run for their lives, the man discovers rhythm in the tense sound, turning it into a vehicle for dance. The man on stage now comes alive as Min Tanaka, the dancer.
“Yo! Don Quixote” consisted of two halves, with an intermission in between. The first half depicted the village in the midst of battle, while the second half showed it after the struggle.

In the words of Seigow Matsuoka, the linguistic director (dramaturg) of the performance, Min Tanaka’s strong conviction to dance, present throughout the entire piece, permeates the body of Min – not Don – Quixote, whose journey has taken him from a small village in Yamanashi to the theaters of Tokyo. Take the movement that is set to a mechanical sound but evokes the plowing of a field; it exudes respect for the peasant and is essential Tanaka, who for years subsisted on farming while living in the Yamanashi countryside.

“The road is long, countries bend, the people are troubled, and wealth is distorted.” 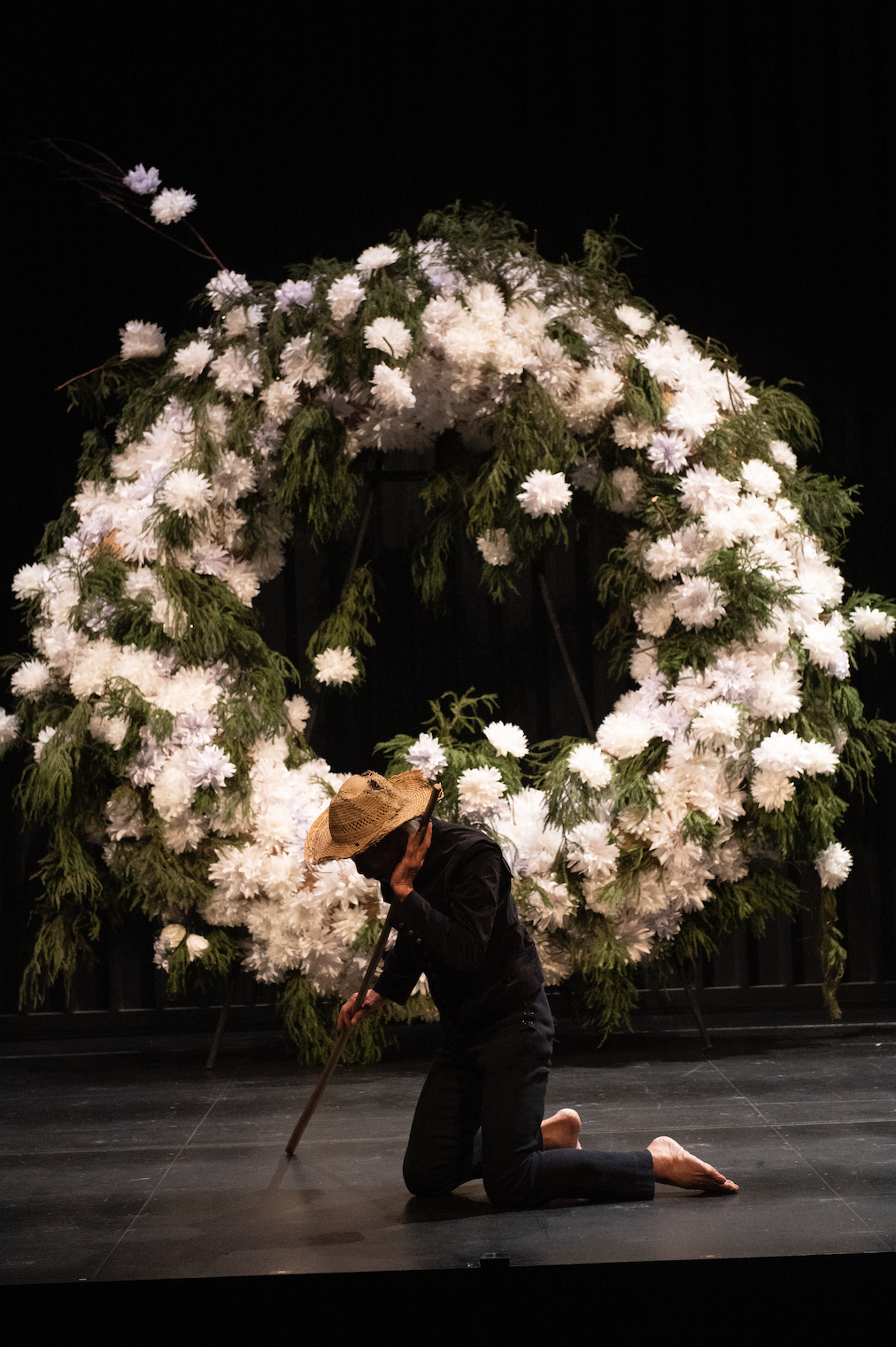 Min Tanaka’s dancing and Rin Ishihara’s intense appearance are complemented by Tanaka associate Seigow Matsuoka’s words, the sound and tones of a cello, and staging such as simple but exquisite sets and lighting. These elements work to lend the extremely simple space a superb sense of depth.

Watching the performance, I remembered the words of a 97-year-old elder I had encountered on my travels. Unaffected by the coronavirus pandemic of 2020, this man was dancing bon odori in the town of Anan, Nagano entirely of his own volition.

“I wanted to dance no matter what, partly for the souls of the deceased, so I danced in front of the monument to the war dead. The military police said it was disgraceful to dance in a time like that and told me to get lost. But I persisted, and danced under the cover of darkness.”

People danced even in a time of war.
His words made me stand up and take notice.

In a time full of uncertainty, we are being asked to stay home and refrain from interacting with others. More and more people are unable to deal with their pent-up desires – something that I think is reflected in the rapid increase in suicides seen in Japan after the state of emergency was declared.

As applause rained down at the curtain call, Min Tanaka suddenly started his post-performance talk. His powerful words were directed at each one of us in the audience.

“The words that appear in our hearts and minds are so, so important. Let us not die without letting those words out – it would be such a waste. So many words are lost together with the body.”

Min Tanaka’s message really hit home.
I think I’ll set out on a journey again – this time with Min/Don Quixote in my heart.

Film director and stage actor. Born in Nagano in 1985, Ota majored in philosophy at Waseda University. “Sotsugyo,” his debut film, won the Japan Tomorrow and Audience Prizes at the 2010 Image Forum Festival, while “The End of The Special Time We Were Allowed” premiered in 12 countries. “Fragile” was released in 2020, soon to be followed by “Sunrise Vibration.” He has acted in plays by the theater company chelfitsch and others, as well as in several television dramas.