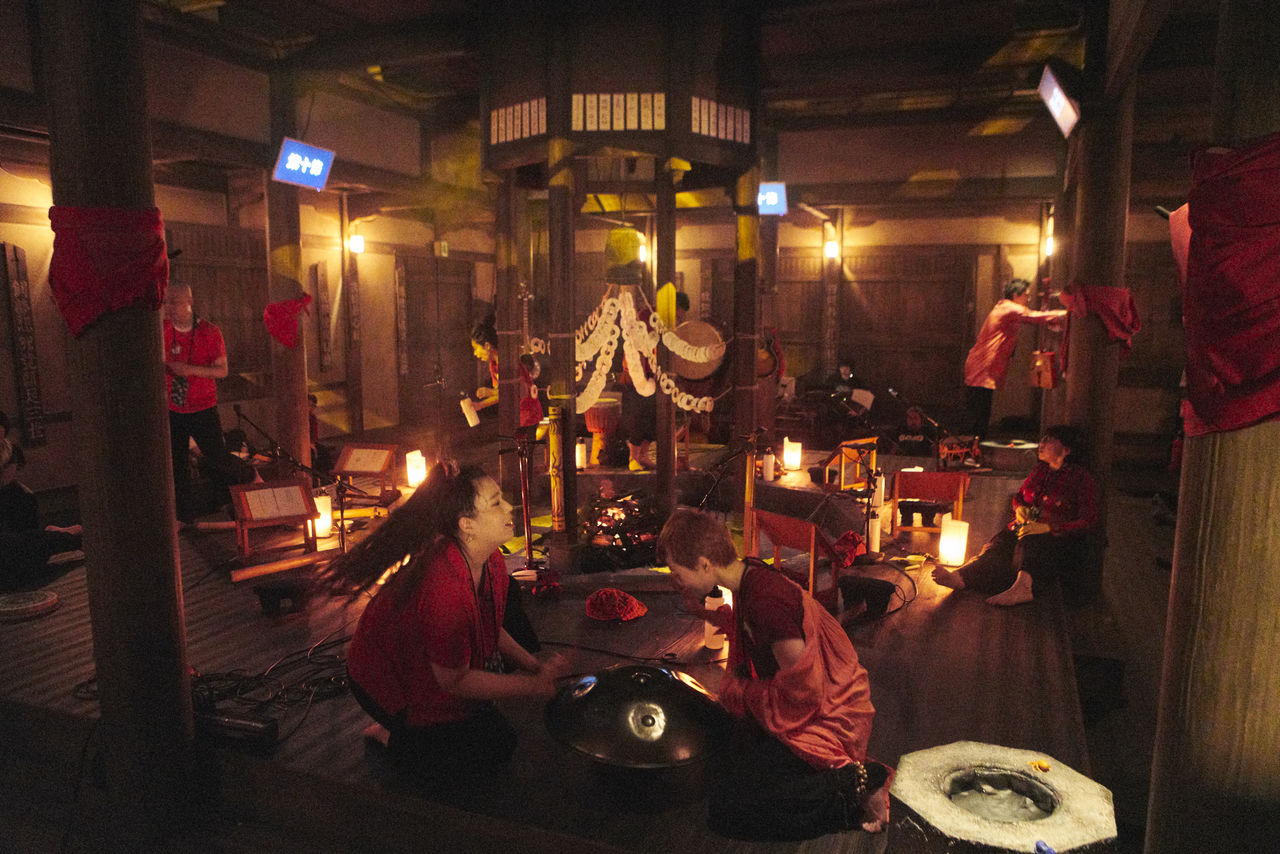 Even before the term “post-truth” began to spread among the people, Kuro Tanino had been aware of the dubious nature of words. That is why he demands his actors to speak lines not as mental utterances but rather as “materials” or “noises”. This reflects Tanino’s directorial vision that prioritizes things pregnant with polysemous truths, over words that tell unambiguous lies. As a result, Niwa Gekidan Penino’s plays are set on stages crammed with insane amounts of aesthetical objects, immaculately designed light, and object-like human bodies.

However, in their latest piece “Takonyudo boukyaku no gi,” there are two elements that mark a progressive development from earlier works. First, a transition of perspective: to borrow from philosopher Wataru Hiromatsu, there is a shift from mono(things) to koto(events). The second, deferring from the objectified bodies seen previously, is a glorification of the corporeality of humans (including audiences). 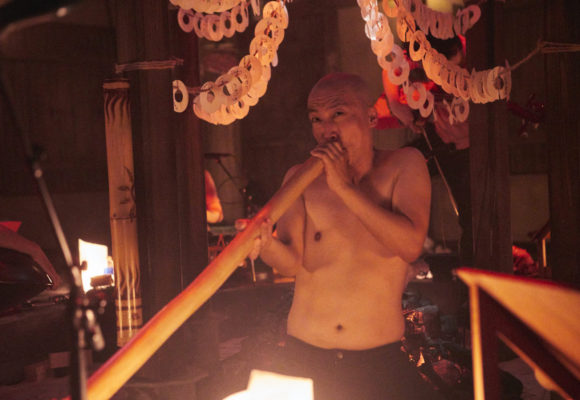 Regarding the first point, as described above, until now the main focus in Niwa Gekidan Penino’s works has been on inanimate objects rather than animate human bodies. Indeed, even on the stage of this latest production, Tanino has constructed a giant-sized temple inside the venue with a stunning degree of precision. However, the piece is not primarily about revering such “things.” The emphasis here is placed on the audience’s experience as they enter the temple and participate in the “event”: a pseudo-ritual with dance, music, and slightly altered Heart Sutra chants worshipping a sacred octopus. In the same manner, stage props are not considered as mere objects confined behind the fourth wall, but the set is covered all over with paper talismans, and spattered with water and smoke. It is presented as a“living art,” responding to and breathing in concert with the performers and the audience — very much like the “psycho-plastic space” proposed byJosef Svoboda, the great master of stage design in the twentieth century.

With regard to the second point, human bodies, which Tanino used to treat as controllable objects, are celebrated as living bodies with blood and sweat. As a matter of fact, the performers, splashing their sweat across the stage, play an alternative rock kind of mishmash of musical genres from various eras and countries (composed by Yu Okuda). Instruments include a didgeridoo, Japanese drum, bass guitar and Tsugaru-shamisen.One could say that this is Tanino’s attempt to communicate with the audience by means beyond words, through the “five aggregates” (pañca khandha) according to the Buddhist concept: rupa(corporeity), vedana(feeling), samjna(perception), samskara(disposition) andvijnana(consciousness). 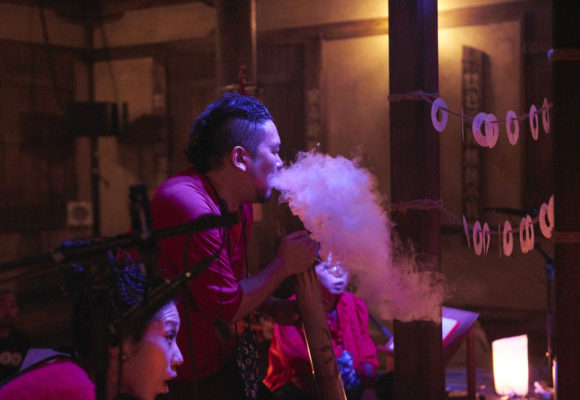 From beginning to end, it is clear that this piece is a critical parody of a Buddhist ritual to attain nirvana during life (sokushin-jōbutsu). Yet, what is unusual in Tanino’s ritual is that the quest for corporeal pleasure is approved and even included in the very scripture (“shinrakushojo”, literally meaning “in order to obtain true pleasure”). In this sense, the production could have included some actions and aesthetics with a stronger emphasis on sexual activities. Despite this shortfall, however, the energy generated on the stage was much closer to that at an euphoric rave event than an ascetic Buddhist ceremony.

A line in the sutra text handed out to the audience says that “all phenomena are empty [kū].” And indeed, the visually-perceptible “images” that this piece presents cannot be blindly believed as representations of truths. For instance, the fire in the octagonal burner is fake, and some key words in the Heart Sutra are altered. All in all, the production is abounded with dubious humour in a post-modern stream. Therefore, if the viewers concentrate on the provided sutra text or the instructions given via an electronic bulletin board, they will be alienated, or even feel bamboozled in an extremely Brechtian manner. But when focusing on meanings conveyed through mediums other than words – the vibration of musical instruments, and the perspiration of bodies – one gets fully absorbed in the production for two and a half hours. The residual heat and the sweat inform us that the event was not at all ‘kū’ but physically real.

Kyoko Iwaki is a JSPS Post-Doctoral researcher affiliated with Waseda University. Currently, she is also a part-time lecturer at Chuo University. Kyoko obtained a PhD in Theatre from Goldsmiths, University of London in 2017. After her completion of PhD, she became a Visiting Scholar at The Segal Center, The City University of New York. Kyoko is a specialist in Japanese contemporary theatre, who conducts research at the intersection of sociology, performance studies, critical theory, post-colonial studies, new materialism and animal studies. For the past fifteen years, she has worked also as a theatre journalist, contributing to media outlets such as Asahi Shimbun Newspaper. In 2015, she was appointed the Chief Director of Scene/Asia project: a pan-Asian researcher’s platform consisted of partners from five Asian regions. Her publications include, Japanese Theatre Today: Theatrical Imaginations of Eight Contemporary Practitioners (Tokyo: Film Art Publishing, 2018 in Japanese).She has also contributed a chapter (chapters) to Fukushima and the Arts: Negotiating Nuclear Disaster(London, Routledge, 2016) and A History of Japanese Theatre(Cambridge University Press, 2016).